Our resident vampire has taken an extended vacation but should be back in October or early November. In the meantime you'll have to put up with more of me and any of the other members of the Collective who contribute during nosferatu's absence.

We first learned about "journalist" Brandon Martinez (who we've taken to lovingly refer to as Turd Blossom) this past February but didn't really pay all that much attention. Mr. Martinez has contributed to such august online journals as "Veterans Today" and "Veterans News Now" as well as Press TV out of Iran. The former two online publications are rife with conspiracy theories (many involving 9/11 and the involvement of Israel and/or Jews in general) and Holocaust denial. And Press TV, when looking for an international perspective on world events, believe that David Duke and Mike Harris are reasonable choices.

It then might not be surprising that Brandon Martinez also holds a similar world view of a world controlled by a vast Jewish cabal, as evidenced in most of his own writing:

More recently, Martinez  has come under the influence of our favorite potential porcine politician Paulie (okay, he doesn't stand a snowball's chance in hell of winning in October, but I had a "p" thing going and wanted to see how far I could go with it). Not only are the Jews responsible for 9/11 and most other nefarious international plots, but they are also responsible for trying to keep the white man down here on the home front: 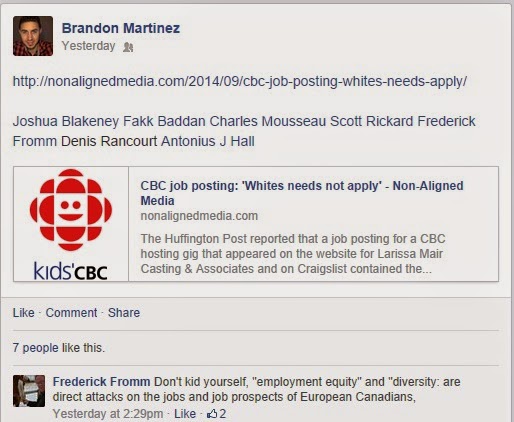 By the way, Joshua Blakeney is another Canadian "journalist" who writes for "Veterans Today" and serves as a correspondent for Press TV. He's also quite a charmer.

Now Mr. Martinez, who has a very smug estimation of his own intellect, likely never expected that he would be challenged on Paulie's own Facebook page.

But challenged he was. And for those who appreciate a good, intellectual, beat-down, I hope you enjoy the show:

Ah! Mr. Martinez has gone full in. It is ironic that he has decided to parrot the arguments Paulie makes when he will soon refer to people who don't accept his wisdom as sheep "parroting" what they are told.

Seems like a reasonable question. Might be a good idea to research the issue you are writing about. But the Brandon Martinez School of Journalistic Ethics has in no need for antiquated ideas such as "fact checking" or "data."

Right. A single advertisement  should suffice to prove a pattern of anti-white male persecution at the CBC. I mean, conspiracy!!!!

Martinez's response is sort of hilarious:

Let's take a look more closely at some of the comments here:

Paul Fromm is only "fringe" insofar as the mainstream is concerned.

Uhm, yeah, that's exactly what fringe means. Now, the word "fringe" in and of itself is not necessarily negative, but when you are someone who pals around with neo-Nazis, members of the Klan, neo-Confederate secessionists, and Holocaust deniers, that really does put a pretty negative spin on your kind of "fringe."

Really though, you'd think someone claiming to be a journalist would know the meaning of words.

The mainstream in this country is nothing more than degenerated sheep towing party lines and touting empty platitudes.

It's really cute when he's trying to be all smug and superior. You just want to pinch his cheeks he's so precious!

That said, given the rhetoric here: 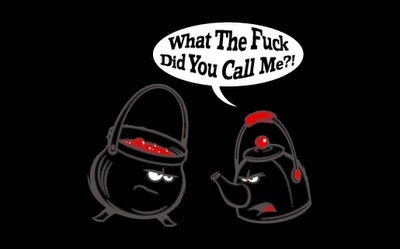 Fromm is a rebel against the establishment, and you are a submissive sheep who kisses up to those in power.

Anyone else have a feeling that Brandon here probably wrote angst-ridden poetry about how everyone else suck but him when he was a tween? Some people grow out of that.

No, he's a bigot who lost his job because he's an asshole. And you are having a temper tantrum because someone called you on your bullshit and you really don't like that. 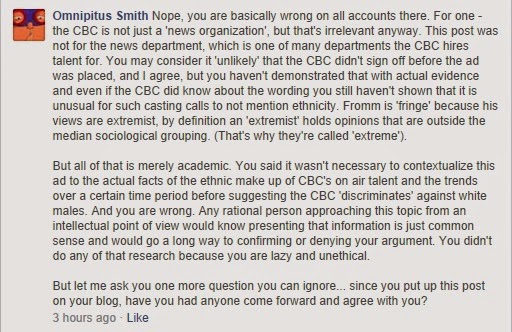 Actually, Fromm's viewpoints, as well as young Brandon's, don't need help to be discredited. That happened long ago.

And no I'm not "lazy" to do research of that nature, but I do have limited time having to work full time and produce quality content for my website.

Wait, you claim to be a journalist Brandon. A journalist is supposed to research his or her subject to ensure accuracy. A journalist just can't say, "fuck it, I'll just go with what I believe anyways" and eschew  digging deep to determine if the fact fit the premise if that journalist has any sort of integrity which you clearly do not possess. So yes Brandon, you are incredibly lazy in addition to being easily manipulated.

And dude, stop trying to use words that you think make yourself appear more intelligent. You are simply embarrassing yourself. 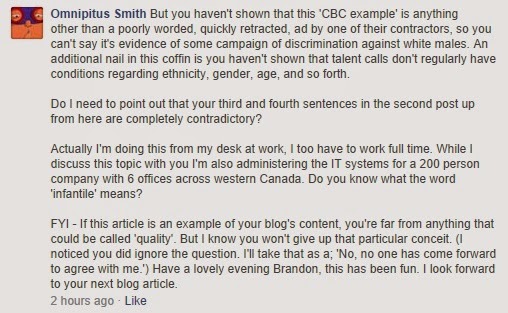 Brandon can only lash out incoherently. 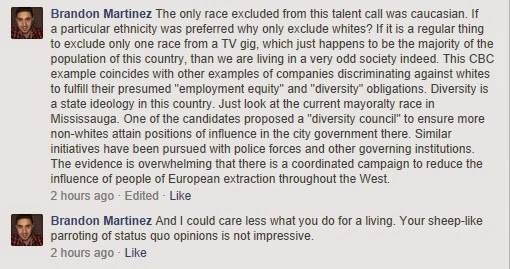 Normally I would suggest that young Brandon best not quit his day job. However, if his brand of "journalism" is his day job, he desperately needs to find a new profession.
Posted by Naberius200 at 22:55

"Potential porcine?" I think not. He's definitely got that going on. Ain't no poetenital about it! It should read, "Porcine, potential politician, Paulie" ;)

You think you have it bad?Try being an immigrant.I was a white immigrant from Germany and like most of skilled immigrants my medical degree was not recognized.I had to work as a cashier in McDonald for over an year before I got a job in US.If I stayed in Canada I had to repeat all my exams and do a 4 year residency.About 1 in 3000 international medical graduates get a residency in Canada.I knew a half chines/half white doctor from UK who got top 10 marks for OSCE in Canada and still didn't get a residency.Immigrants have to pay taxes on money they bring to Canada and most of them end up working in a $10/h jobs;I payed $400 000 in taxes.You guys really need to treat immigrants better.Can't imagine being a non white immigrant in Canada.