The Failure of "Cobbsville" Part II: Cobb and Dutton Taken Into Custody

Well, that was fast.

When we started what we planned as a three part series, we hadn't anticipated this happening so suddenly.

Claiming they had been the victims of a number of crimes, Craig Cobb and Kynan Dutton decided to begin armed patrols of the town. As one of the other members was putting up a surveillance system with help from a friend (the Leith website administrator), they were approached by an armed Cobb and Dutton along with Dutton's partner:

CRAIG COBB & KYNAN DUTTON WERE TAKEN INTO CUSTODY THIS AFTERNOON AT 2:45PM IN LEITH, NORTH DAKOTA AND TAKEN TO THE MERCER COUNTY JAIL IN STANTON, NORTH DAKOTA.CHARGES ARE PENDING BUT COULD INCLUDE WEAPONS CHARGES AS WELL AS FELONY TERRORIZING WITH GUNS!

CITY COUNCILMAN LEE COOK AND MYSELF HAD TRAVELLED TO LEITH TODAY TO INSTALL A VIDEO CAMERA SURVEILLANCE SYSTEM AND WERE OUTDOORS ON HIS PROPERTY LOOKING AS TO WHERE TO INSTALL THE CAMERAS WHEN THE NEO-NAZIS BEGAN APPROACHING US WITH DUTTON CARRYING A RIFLE AND COBB SPORTING A SHOTGUN, FOLLOWED CLOSELY BEHIND BY DEBORAH DUTTON BOUNCING ALONG WITH A CELL CAMERA FILMING THEM.

AS THEY CAME WITHIN 10 FEET OF MY CAMERA CLICKING AWAY AT 4FPS THEY MARCHED ON DOWN THE STREET AND AROUND THE TOWN FOR ANOTHER SWEEP OF WHAT THEY CALL THEIR DAILY PATROL.

MR. COOK AND I BOTH CALLED 911 AND REPORTED 2 ARMED MEN IN TOWN APPROACHING US AND GAVE THEIR NAMES AS WE KNEW WHO THEY WERE.

SHORTLY THEREAFTER THE GRANT COUNTY SHERIFF'S DEPARTMENT ARRIVED AND WITHIN 30 MINUTES OR SO AFTER THEIR INVESTIGATION PLACED THE TWO MEN IN HANDCUFFS AND DROVE THEM AWAY.

MORE PHOTOS MUCH LARGER WILL APPEAR ON THE LEITH WEBSITE LATER THIS EVENING.

WATCH FOR AN ARTICLE IN THE BISMARCK TRIBUNE ONLINE WRITTEN BY LAUREN DONOVAN SHORTLY AS WELL AS NBC CHANNEL 5 KFYR TV WILL RUN THE STORY ON THEIR 10PM (CST) NEWS.

It sounds as if there will be more photos posted soon, but in the meantime here is what has been posted so far of the arrests being made: 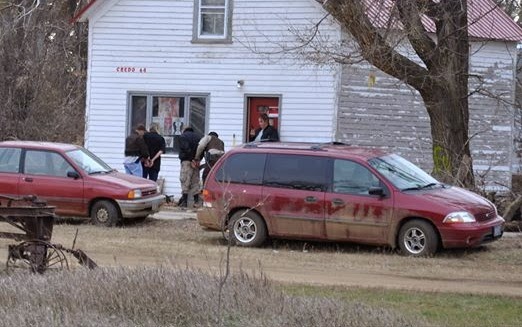 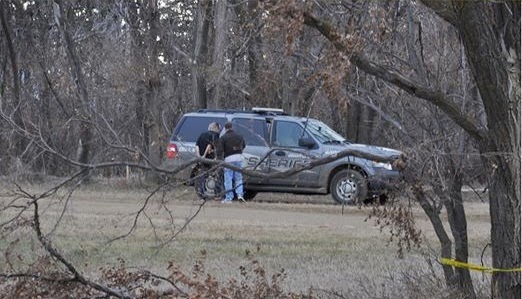 An early report in the press is found here:


The Grant County Sheriff's Department has confirmed that White separatist, Craig Cobb has been taken in to custody.

We received an eye witness account of what happened earlier this afternoon that led to Cobb and his supporter Kynan Dutton being taken into custody.

"Craig Cobb and Kynan Dutton approached myself and Lee Cook with a shotgun and rifle in hand," says Bruce. "I took photographs, they walked around town twice, they followed Miller Ferry home, scared her with a shotgun and rifle in hand and we called 911 the Grant County Sheriffs came out with the two deputies, John Foss and Derrick and took them into custody, handcuffed them."

We're sure this isn't the end of the troubles for the fine citizens of Leith, but we do hope it marks the beginning of the end.
Posted by Nosferatu200 at 19:00

The only thing worse than these weirdos is being a non violent not neo nazi idiot positive peacefull nationalist and being grouped in with these idiots.

Figured you might get a kick out of the latest:

So allegedly they were 'patrolling' the town after Cobb was the victim of racist graffiti as a result of the DNA tests.