The McKee faction of Blood & Honour has been uncharacteristically quiet aside from the suspected  attack on the Devine home in September and their short-lived website.  And except for a planned MMA exhibition (i.e. a couple of drunk boneheads wildly throwing haymakers at each other in an unfinished basement while being poorly filmed), the Southern Ontario Skinheads haven't appeared all that active either.

Which isn't to say that things aren't interesting if one knows where to look.

We have to admit that we don't know the reason but there has been a wee bit of tension that exists between the members of both racist gangs which is interesting considering the overlap. For example, the founder and (for lack of a better word) leader of the S.O.S. is Max Hynes who, when he lived for a time in Calgary, was closely associated with B&H and when he returned to Ontario started a B&H branch there. The leader of B&H in Calgary, Kyle McKee, has his own origins in southern Ontario. Eric Sheridan, a Toronto member of the S.O.S., helped flyer Lethbridge with the precursor of B&H (the Aryan Guard) in 2007. And Brenin Bonifaz who was appeared to be closely associated with the S.O.S. is now very much a part of McKee's B&H now that he has moved to Calgary.

Which brings us to Brenin Bonifaz. 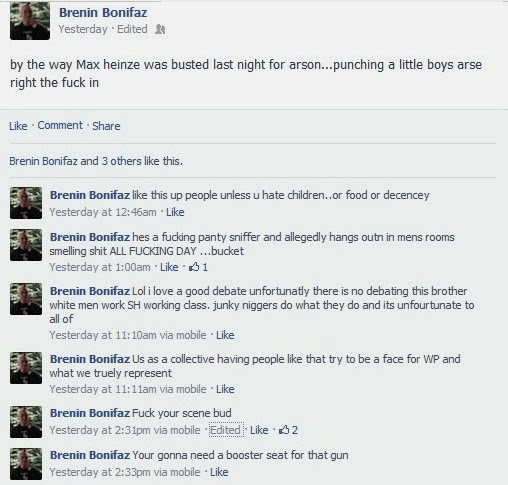 It looks like since we grabbed these screen shots Bonifaz has removed the whole monologue, but a couple of questions come to our mind upon reading this:

1. At the risk of being referred to as, "noobs" by the kids, what the hell is a, "hard Furback"?
2. What did comments that were deleted say?

It seems pretty clear that there was a much more extensive conversation going on. Bonifaz seems to be discussing the rational for insulting (because calling someone a, "hard Furback is and insult, right?) Hynes in what we would regard as in rather personal manner and is arguing with one or more individuals who's comments are no longer available.

It would be very interesting to know exactly what they were talking about. Sadly, we can only imagine what the rest of the discussion might have been.

Naw! We're just screwing with ya! Of course we know what the rest of the conversation was about.

We were watching a lot of it take place in real time:


Now there might have been something that we missed. Perhaps there was a comment that we didn't manage to grab a screen shot in time. However, if we didn't know better, we would think that the exchange we presented might just have something to do with this incident for which Jessie (and another two individuals) know finds himself in some rather hot water.

It also allows us to make sense of this one-sided online conversation sent to us a few days before:


Okay, we admit that it's difficult to make sense of anything "David Lawson" (a.k.a. "Odin TheCelt" a.k.a. "Yordi Jewkiller" a.k.a. "WernherVon Braun") says most of the time, but before he goes off on a stream of consciousness tangent, it looks like he also might be referring to the alleged assault of Max Hynes committed (again, allegedly) by Jessie Lajoie and Eric Marshall (Marissa Kissack is also suspected of having been involved in some way).

Guys, seriously. This is way you all consistently fail.
Posted by Nosferatu200 at 14:17

That Yordi guy is something else. Is it me , or does he remind you of every 17 year-old punk kid who thinks hes tough from that show, Scared Straight ????? Not saying "SOS" is filled with University grads, but fuck that guy is retarded.