The Failure of "Cobbsville" Part I: The DNA Conundrum

We know that Craig Cobb is in the United States and that we don't usually focus on events south of the border, but owing to Cobb's unfortunate connection to Canada (the citizenship he seems to have gained some time in the 1970s) we couldn't help but pay attention to his efforts to turn little Leith, North Dakota into a, "wretched hive of scum and villainy."

Things are not going well at all for Cobb and his supporters though because really no one is coming. Well, there are a tiny few who heeded his call, but we'll discuss that in a later post.

It's so bad that he's taken to encouraging the cream of the crop from America's penal system to make their way to Leith upon release: 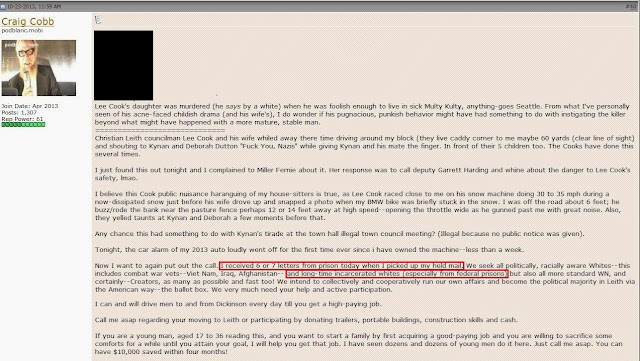 But really, this is just one example of the collapse of Cobb's dream. We plan on rather gleefully documenting that collapse in three posts of the coming days.

And with that, let's just get right to the point.

Cobb has dismissed the results on a number of grounds. He doesn't trust the television program that did it. The company that the sample was sent to is shady. Our favorite though is the claim by Cobb and others that DNA testing can not accurately determine race, an interesting position to take for this lot and something we will soon examine.

But while Cobb and his cohorts dismiss the results of the DNA testing, they are clearly concerned about the ramifications as evidenced by the fixation he and the others have on his results as well as the fact that Cobb, who appears to have dismissed DNA as a way to determine ancestry, is planning on taking additional DNA tests on his own dime.

There is reason for Cobb to be concerned. The "White Nationalist" movement is, in large part, reliant on the pseudoscience of race as a justification for the irrational bigotry and hatred of the movement. From Philippe Rushton and The Bell Curve to the folks at "American Renaissance" and the Pioneer Fund, racists have used shoddy and ideologically-tainted "science" to justify their claims of racial superiority for decades. It doesn't matter if the science behind the claims of racial superiority is thoroughly refuted, racist continue to use these refuted studies as evidence of the "rightness" of their views. There are long running threads on both Stormfront and VNN where members argue about race based on genetics and physical characteristics. Of course historically the Nazi regime tried to use science to justify their eugenics program and the genocide of Jews, Roma, and other, "untermensch."

And in spite of the Cobb DNA fiasco, they continue to rely on racial pseudoscience.

On White Nations itself and the very same thread where DNA evidence (at least that which indicates Cobb has some sub-Saharan genetics) was dismissed as junk science, the individual who created and runs the forum indicates that he is planning on establishing the first of what he hopes will be the first of a number of settlements inhabited by members of the Creativity Movement:

So, how are they going to determine who is and who is not a Jew? 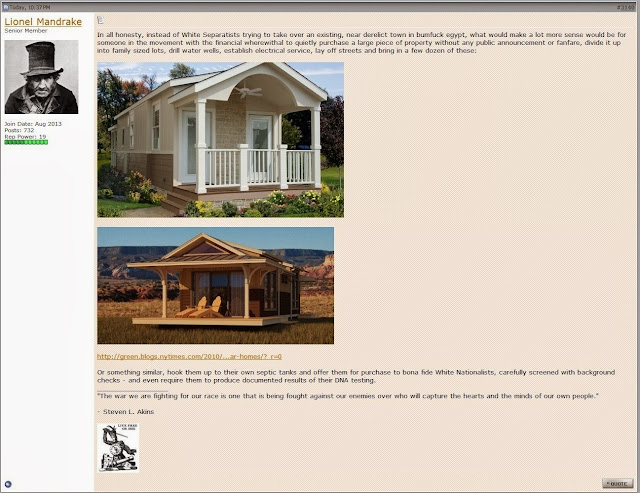 So in other words, they want to have their cake and eat too, something not missed by one of the other forum regulars:

And therein lies the problem.

Even though Cobb has dismissed the DNA results, he is knows enough that in the world he exists in the accusation of not being "white" can be enough in some circles to be attacked. That there is some scientific data to confirm he is not a pure Aryan could potentially be dangerous. As such he is, on his own dime, taking other DNA tests.

And none of those tests will be of welcome news to Cobb.

For example, one test he suggests he will take is that which is being conducted through the National Geographic Society. The Genographic Project aims to trace human migration patterns through DNA analysis:

The results give you an unprecedented view of your lineage. You will discover the migration paths your ancient ancestors followed thousands of years ago, and learn the details of your ancestral makeup—your branches on the human family tree.

If Cobb does submit his DNA for analysis to the Genographic Project, the results will indicate that he has some non-European genetics. This is an absolute guarantee:

Modern day indigenous populations around the world carry particular blends of nine regional affiliations. We compared your DNA results to the averages from each of 43 reference populations we currently have in our database and estimated which of these populations were most similar to you in terms of the genetic markers you carry.


What will this mean? Some will continue to dismiss the DNA results as some sort of Jewish conspiracy. But others?

It is funny though that there is justified reason to be critical of the results. It is really an oversimplification to claim that anyone is a % of any race and, as real scientists continue to point out, race as we know it is a social construction rather than a biological reality.

I thought the same thing as your concluding paragraph when I watched Cobb squirm on TV earlier this week - "how can someone be a percent of something that doesn't really exist?" If any of these boneheads were thoughtful they could probably spin this result away on those lines, but then look who we're dealing with.