Hey, Tomasz. You should pay attention to this story.

We haven't written a lot about Craig Cobb since his arrest and his subsequent flight from Canada a few years ago, aside from his rather disconcerting effort to get him some lov'n. But Crusty the Cobb has been busy. For starters, he has re-established Podblanc. If our readers need a reminder, Podblanc is sort of the racist version of YouTube. Many of the videos Cobb created and posted to his site were those in which he presented himself as a reporter. He then proceeded to ask questions rife with racial epithets designed not to elicit thoughtful responses but anger from the target (for example, as Rosa Parks' body was lying in state in Washington D.C., Cobb informed visitors waiting in line to pay their respects that she was a, "shitskinned communist" and that he was celebrating Parks death). In fact, Cobb often makes nasty little comments about the appearance of his targets, which makes it rather ironic that he seems so thin-skinned when the roles are reversed: 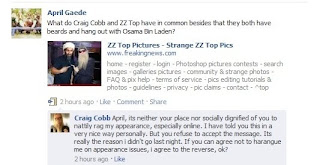 But that's not all. Cobb has decided to fulfill the wishes of many "White Nationalists" including our own Tomasz Winnicki by attempting to create a bonehead utopia, Turns out a little over a year ago Cobb started buying property in a little North Dakota hamlet:

Paulie? Hmmmm, interesting. Then again it's not as if Paulie and Cobb don't have a history together: 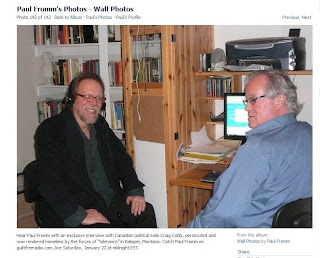 Our readers might have noted that Cobb is banned on VNN. More on that in a future article that we're sure is bound to come up sooner rather than later.

Today, the msm caught wind of the story:


“I didn’t have a clue who the guy was until he showed up. All I know is he bought that house sight unseen, $5,000 cash, and had no idea what it looked like, where it was, other than he knew the directions to get to Leith,” Mayor Ryan Schock told the Hatewatch blog.

Craig Paul Cobb, 61, has been buying up abandoned property in Leith, a town of only 19 people. He has invited other white supremacists to live on his properties and help take over the city.

In a post last year on the Vanguard News Network forum, Cobb said anyone who lives on his property would be required to fly a “racialist banner” — such as a Nazi flag — 24-hours a day. They would also be required to try to “import more responsible radical hard core [white nationalists]” and become a legal resident of the state so they could vote in local elections. He plans to rename the city “Cobbsville.”

“Imagine strolling over to your neighbors to discuss world politics with nearly all like-minded volk. Imagine the international publicity and usefulness to our cause! For starters, we could declare a Mexican illegal invaders and Israeli Mossad/IDF spies no-go zone. If leftist journalists or antis come and try to make trouble, they just might break one of our local ordinances and would have to be arrested by our town constable. See?” he wrote.

Cobb has even built a concrete prison, where he plans to “lock up recalcitrant journalists and lefty commies who violate the codes or peace of the community.”

Cobb had moved to Estonia in 2005 but was later deported to Canada, where he was arrested in 2010 on federal charges of willful promotion of hatred. He fled back to the the United States.

The plan to turn Leigh into a white supremacist paradise has the town’s only black resident understandably worried.

“The more the word gets out, the better chance that we can move him out. People are welcome if they’re here to improve our community, but they’re here to bring hate,” Bobby Harper told The Bismark Tribune.

So, ladies and gentlemen, we would like you to close your eyes and imagine a community of boneheads who consider Craig Cobb to be a great visionary.

Let that sink in for a moment. Then stop laughing.

So Tomasz, what do you think? You've been suggesting that a "White Nationalist" community would be a utopia devoid of crime and want. Here. Craig has bought property and is offering it to people, including at least one prominent Canadian:

We're sure a well-known bonehead such as yourself would also be welcome here in "Cobbville" so now is the time to, as they say, shit or get off the pot.

But you'll need to hurry as Cobb is allotting property pretty quickly and has big plans (all captions have been provided by Cobb): 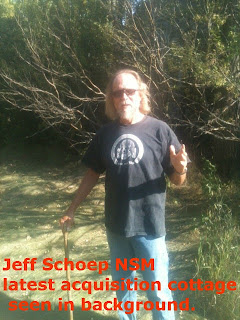 It's your dream Tomasz. All you have to do is to grab it.

Where did he get the money, I wonder? I mean, land there is pretty cheap, but...

As a resident of North Dakota, I find this exceptionally disturbing. It is very unfortunate that the Canadian government apparently has no interest in extraditing Cobb. Obviously no one is afraid of being charged with a crime they are not going to be tried for and, if convicted, punished.

Cobb has already found that even though North Dakota's population may be primarily white, the majority of us do not share his beliefs and will not stand by while he attempts to create such a vile community.

BCL: Much of the time he's buying property from people who own the land, but have never been there and have no intention of ever visiting Leith. It makes sense that these landowners would accept a couple of hundred dollars for the land. Really, buying property in a ghost town is pretty cheap.

Anon: There is an arrest warrant out for Cobb in Canada, however the crime he committed in this country is not a crime in the United States. I don't for a moment believe that the good people of North Dakota are in agreement with Cobb and his ilk and his insanity is not reflection on North Dakotans.

Cobb is an ugly fucker.