Back in October 2012 Tyler Sturrup was reported to be drafting a charter challenge, the basis of which remains unknown. As such this comes as a bit of a surprise:

CALGARY- A former white supremacist has pleaded guilty in the death of a man who was viciously attacked and found dead in front of a northwest strip mall.

In October 2010, 47-year-old Mark Mariani was approached by two complete strangers behind the mall. They knocked him down and repeatedly kicked and stomped him. Mariani died of severe head injuries, and the motive behind the vicious attack is still not known.

27-year-old Tyler Sturrup entered a guilty plea in court on Monday in connection with the attack—the very day his trial was set to get underway.

“I think we were all preparing for a long, lengthy trial, preparing to go the distance for whatever we needed to do, and it was a shock this turned around like it did today,” says Mariani’s brother, Dino. “We’re all surprised by it.”

In court, Sturrup offered an apology, saying, “I cannot give Mark his life back, I wish I could. But I can take responsibility.

“I deeply regret my past violent and reckless behaviour. I’m sorry for the pain I’ve caused your family.”

Sturrup was sentenced to life in prison, with no chance of parole for 10 years.

While Mariani’s family left court satisfied some justice has been served, there is still another trial scheduled. Robert Reitmeier, the second man accused in Mariani’s murder, is set to face a judge in the fall.

With files from Nancy Hixt

Not sure how this influences Robert Reitmeier's trial, but it certainly makes things a bit more interesting. If we were to guess though, we would imagine that it doesn't look too good for him. 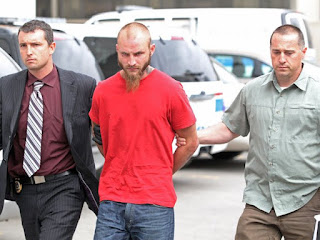 While the imprisonment of Sturrup will not bring back the life of Mark Mariani, at least he's off the streets for a long time and will not be able to hurt anyone. He might be up for parole in 2021, but given his personality and penchant for violence, we hope he rots there.
Posted by Kurt Phillips at 17:51

Disgusting how cheap a life is under Canadian "justice".

At least we can add the term "murderer" to describe this scum.

Whats the status on McKee? Him and Sturrup are two peas in a pod as far as the whole violence and murder (attempted in the case of McKee). Its a real pity we don't have three strikes law in Canada.

The cops should be talking to Noble about creating a known terrorist group and his continual involvement with that despite the fact of his probation.

Yep. In another article he was described as a former neo-Nazi as well.

why hasnt dusty johnson been charged in this murder aswell?

What do you know that we should know? If you have information on Dusty, let us know.

How do I give you dustys info?

Email is on the top left of the blog right under the Gonzo Journalism picture.