We're still working our project to document the early history of the modern racist movement in Canada (focusing on the years between 1960 and 1999 primarily and paying special attention to the Heritage Front, Western Guard Party, and Edmund Burke Society, though any photos, newspaper clippings, letters, or documents would be a welcome addition to our collection). We have been thrilled with the wealth of information we have received from our readers and we wish to thank all of you who have contributed to the project.

One of our readers sent us the following editorial cartoon from 1993 that we thought we would share: 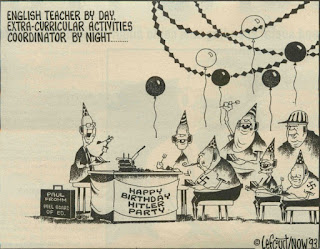 The cartoon refers to Paulie's association with far-right hate groups, particularly the Heritage Front. In 1993, it was reported that Fromm had attended a neo-Nazi event celebrating Hitler's birthday two years earlier; the cartoon references this event.

And 20 years later, we see that Paulie still likes to associate with neo-Nazis: 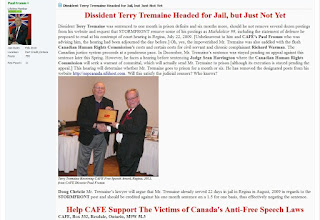 After whining about the "destitute" Tremaine, Paulie makes his usual financial request.

One again has to wonder how much of that money Tremaine will ever see?

If you wish to contribute to the project, please contact us at arc.collective200 (at) gmail.com.

There's a wonderful picture of baby-faced Paulie, soaking and out cold, after he lunged at William Kunstler and the old man defended himself by dousing him in a pitcher of water. It was carried in papers across North America in May 1970 and was Paulie's first major foray into media stardom. If you could dig that one out of the archives I'm sure Paul would really appreciate it.