Last night we noticed that there was a new update concerning Terry Tremaine on CBC:

A Regina judge has stayed a charge against Terry Tremaine, who was accused of continuing to post hate speech online in defiance of an order from the Canadian Human Rights Commission.

In 2007, the commission ordered Tremaine to stop posting anti-Jewish material on the internet.
In 2009, Richard Warman — who initiated the complaint against Tremaine — said in an affidavit that Tremaine is disobeying the order and was, at that time, continuing to post material that advocates the extermination of the Jewish community and also attacks blacks and other non-whites.

With a stay of proceedings, Tremaine is no longer before the courts over the allegation of disobeying the commission's order.

It is the second time this fall that a charge against Tremaine has been stayed.

In September a charge of promoting hatred was discontinued because the judge said the case took too long to get to trial.

Tremaine is a former math instructor for the University of Saskatchewan.

We thought that this was a bit curious, as the only other case we were aware of was the contempt charges brought about as a result of Tremaine's violation of the CHRT ruling which ordered him to remove hate propaganda from his website and issuing a cease and desist order on posting any other hate propaganda online. Given the case was being heard in the Federal Court in Vancouver, we wondered why it was a Regina judge who was staying the charges.

After a bit of discussion amongst ourselves, we think we've figured it out. The above article is likely a result of the criminal charge of breaching his bail conditions that arose from his s. 319 criminal charge. Since the s. 319 charges were stayed, we suppose it makes sense that the judge would stay related charges.

However, the contempt charges will proceed through the Federal Court.

But this reality hasn't stopped the good folks at Free Dominion from becoming giddy with excitement that a Nazi who has advocated for the elimination of Jews and the destruction of Israel will continue to be able to attack his victims unabated: 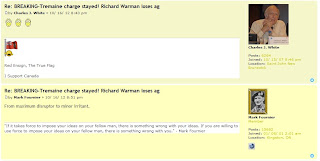 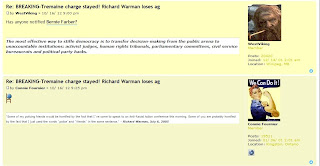 We wonder if Duane (RedDog) would be as comfortable with these opinions if the person who voiced them was named Ahmed and not Terry.

By the way, here are just some of those views that the folks at Free Dominion, who's founders claim to be one of the most pro-Israel website in Canada, are celebrating:

The more a person researches the events surrounding WWII (before, during and after) the more one is led to the conclusion that the real holocaust was against the German people and instigated by the Jews. The holohoax story attempts to invert that and portay(sic) the juden as victims of the `evil Nazis'. As time passes we are learning more and more the real truth.

It is nearly one year since Hanadi Jaradat struck a blow against ZOG. I know there are WNs who will criticize me for honouring a muslim in this way but I do not honour her as a muslim or arab, as such, but as a dedicated soldier fighting against ZOG. Nor do I suggest we all strap bombs to ourselves and start blowing up Jews. My only intention is to draw attention to her courage and self-sacrifice (literally) and hope for the day when we have a thousand WN [White Nationalist] equally dedicated to destroying our enemy.

The more the Jews try to stamp out anti-semitism the more it will increase. That is guaranteed. It will increase until the Jews themselves realize thay(sic) are the cause of anti-semitism (which will never happen). Just as a healthy body attempts to identify and repell(sic) foreign destructive organisms so too any healthy society will react to the Jew with revulsion and disgust and will desire to have them expelled. The Jews attempt to undermine this healthy response the same way the AIDS virus interferes with the body's rejection of foreign organisms. But for the Jews that will not work. There are too many people aware. We are like the White blood cells in certain people that are immune to the effects of the AIDS virus.

The Arabs are NOT the new juden. The juden are the juden!! As Dr. Pierce used to say, once we deal with the Jews everything else will just be mopping up.

The Jews are the poisoners(sic) of all nations. One reason they promote multi-culturalism (which is really multi-racialism) is to create a country of mulatos(sic), whom the Jews find easy to control and a bunch of squabbling ethnic groups whom they can divide and conquer. In a multi-racial country the racial group with the strongest ethic solidarity will rule. The Jews believe, in all likelihood truly, that they have sufficient internal cohesion amongst themselves to rule, especially considering their current grip on the financial, political, educational, and cultural (media) institutions.

Every ethnic group must recognize the above to be true. We, as WNs, can form strategic alliances with other national groups but we must be wary of trying to get others to fight our battles for us. In such a case, those other groups will determine the configuration of a final victory. We must determine that configuration ourselves. In practical terms, the final configuration must not involve the breakup of any of our formerly White countries. Rather than trying to create some little White-only national territory, we should have a grande view. Kick the Jews out and have no more to do with them regardless where they end up. Then help the other ethnic groups towards repatriation. ... They do not share our values, which is (sic) demonstrated by their tendency to gang activities and crime in general. And even if they did share our values we do not want them here because we want our territory for the advancement of our own race to achieve our racial advancement.

We can establish an agreement among other national groups to ensure the Jews have no safe haven to re-establish another base of operations such as America and Britain. [...]

Fundamentally we (and all ethnic groups and races) must see the Jews as alien poisoners (sic) who always try to get others to do their dirty work. That way they can always claim innocence and do not get their hands dirty. Nor do they have to spend any of their own precious gold. They have openly declared that they would rather destroy the world than have their own national existence threatened (the Samson Option). We must accept that they are serious about that. We must turn that around and say, better that the Jews and Israel be destroyed than have the world destroyed.

You can't be anti-racist and be pro-Zionist. It's that simple. You are a fraud....and not untypical, unfortunately.

But cheers for you're undeniable willingness to make it look like you care about human rights...

People who read this blog are well aware of our positions. We support Israel's right to live in peace with their neighbours. We believe the Palestinians have the right to self-determination and that ultimately a two state solution is the most workable resolution. We understand the Israel desire to maintain security but condemn actions that are out of proportion to the threat. We condemn groups such as Hamas that seek to harm Israelis.

And we are comfortable with this position.