Given some of the attitudes of some (though not all) individuals on that web forum, we perhaps shouldn't be surprised:

To be fair to Free Dominion, CdnRepublican was amongst the most extreme Muslim haters and was called out by a number of the regulars (and he no longer posts there now). But there's another bully there who is still a member in good standing: 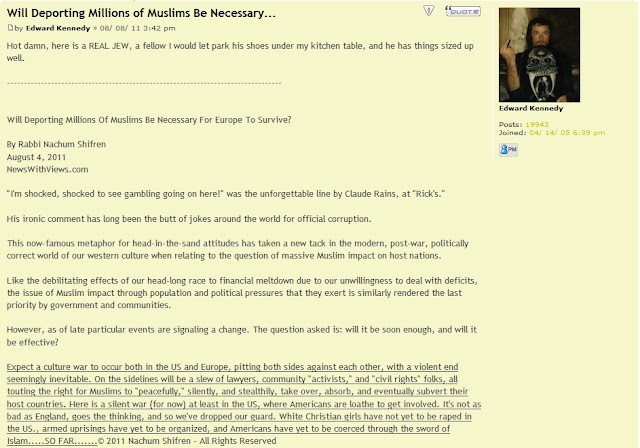 And this (and more) from people on a website that presents itself as mainstream.

Is this rhetoric dangerous? We think Norway has answered that question definitively.
Posted by Nosferatu200 at 00:22

Thanks for this post. Anti-Muslim hatred is rising steadily in Canada. The overwhelming majority of Muslims are law-abiding, have absolutely no connection with terrorism and despise it. Muslims are productive, hard working members of our Canadian Family. They often work long hours in 2 or 3 jobs, pay taxes and are model citizens. I would dare say that because of their thrift and hard work they have a better standard of living than most of the posters on Free Dominion, who strike me as a bunch of losers, blaming their failures in life on others. My advice to them is to get an education/job, move out of your mum's basement and take responsibility for your failures in life rather than blame the innocent.

What scares me about the inbreed advocate rednecks is their love of guns. Leftists tend to be tolerant of right-wing whackjobs and while they condemn their words and ridicule them, they defend their right to say it and generally think of them as harmless. In Norway, the right was regarded as harmless by the left. Look how that worked out for them. These nutters are dangerous.