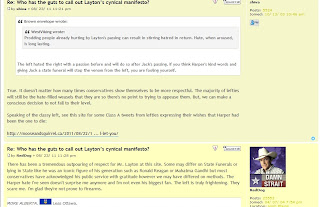 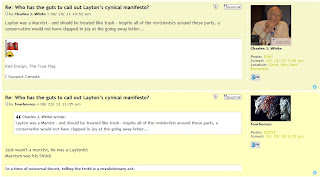 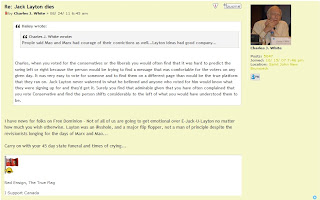 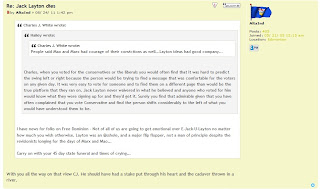 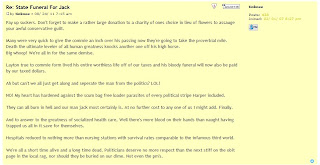 Or how about the Christine Blatchford article? Or perhaps the Mike Strobel article (in this case, as bad as the article is, the comments are far, far more despicable)?

Here's the point. Let's not play the, "who is the bigger douchebag?" game. You want to point to classless "lefties" who celebrate the death of conservatives? Fine, but please don't try to claim the moral high ground when many on your side are as bad and can just as often be worse.

And whether you accept this or not (and sadly we suspect that you won't), the members of this blog wouldn't rejoice in or celebrate the death of Harper, Kenney, Ford, the Fourniers or any other conservative, regardless of our fundamental and real differences (our resident conservative Sparkie not withstanding). Nor would most of the, "lefties" that we know.
Posted by Nosferatu200 at 17:31

I really, really liked Jack Layton even though I am more (slightly) right leaning. His last press conference kicked me in the gut. He was so brave and optimistic, even though I think everyone "knew." Hands down, he's the only Canadian politician that made one feel like he was sincere. Besides that, he really wiped that condescending smirk off of Ignatieff's face! And I'll bet he gave Harper a near heart attack, because he wasn't going to play the usual game on the hill. He was alright, and anyone who didn't get a lump in their throat while watching his wife approach his casket is truly soul-less.

WOW the far-right are cold.