Since the day Paulie added Strom, the two men have enjoyed a number of exchanges discussing Paulie's posts, including: 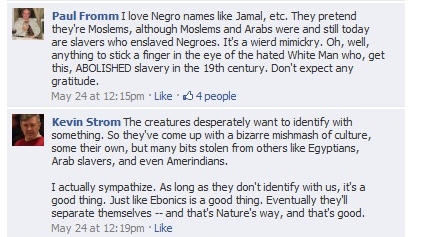 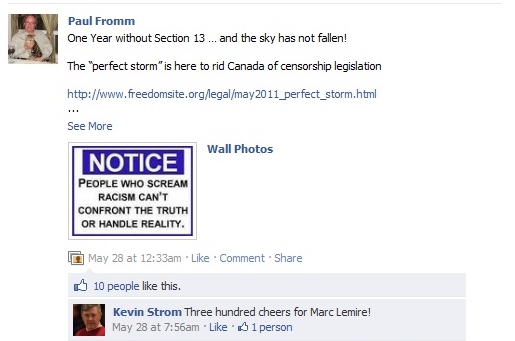 And of course this one which, as we pointed out when we fist published the screen shot, is quite ironic: 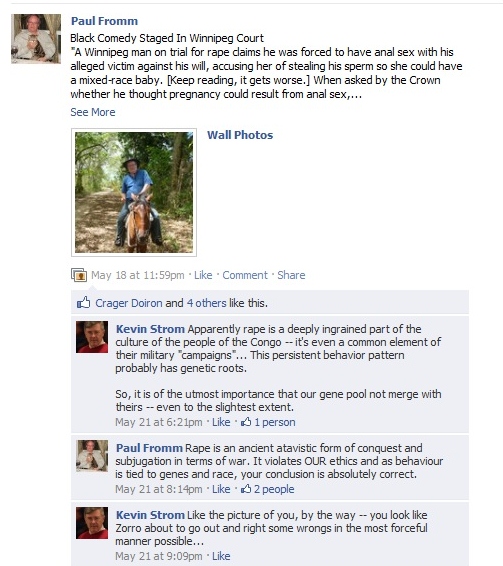 The irony we then pointed out is that Strom himself is a convicted sex offender. Strom was charged in January 2007 with possession of child pornography and witness tampering. Later, a Grand Jury also included charges that Strom had attempted to entice a 10 year old girl into a sexual relationship as well as witness intimidation. While these last two charges were thrown out by the judge, the judge did note that Strom, "had engaged in questionable conduct":


“I think there is overwhelming evidence that he was sexually drawn to this child, and was obsessing over this child,” Moon said.

However, the judge ruled that prosecutors failed to show that Strom tried to pursue sex with the girl.

Authorities maintained that Strom sent the Orange County girl anonymous gifts, drove past her house and wrote lyrics to love songs professing his desire to marry her.

Authorities seized Strom’s computer in October 2006 and found more than 100 pictures he’d taken of the girl, including many in which she was clad only in a bathing suit, according to testimony.

However, prosecutors never showed in court that Strom made a substantial step toward soliciting sex from the child, defense attorney Fred Heblich argued in court Wednesday.

“In order to convict him, [the jury] would have to speculate,” Heblich said.

Strom, however, wasn't able to beat the child pornography charges:

During the hearing, Strom said he is neither a white supremacist nor a neo-Nazi and maintained that he’s been threatened in jail after media accounts described him as such, said defense lawyer Andrea Harris.

“The bottom line is that he feels like those terms don’t accurately reflect what his beliefs are,” Harris said. “He adamantly denies being either one of those things.”
However, others said Strom’s denial lacks credibility.

Strom was once part of the leadership of the National Alliance, a West Virginia-based organization Potok said was a white supremacist group.

Strom edited some of the organization’s publications and produced and sometimes hosted its shortwave radio and Internet broadcast.

“Jews are so dominant and influential in debasing and deceiving white women and girls on such a massive scale that, to any decent white person, no forgiveness is possible,” Strom said at the beginning of one August 2003 radio show....“In our political world there are subtle differences,” Elisha Strom said. “The thing I kind of wonder more about is that he doesn’t seem upset that he’s being called a pedophile, but he has a problem being called a neo-Nazi.”...Things started to break down for the couple in 2006, after Elisha said she returned home one day and found her husband sitting naked in front of the computer looking at child pornography.

Afterward, in an apparent attempt to patch things up, the two signed a notarized contract in which Kevin Strom agreed to seek treatment for pedophilia. But the couple’s relationship continued to disintegrate.

In August 2006, investigators seized Strom’s computer during a raid of his home. He was arrested in January 2007 after a federal grand jury indicted him on charges of witness intimidation and possession of child pornography....In April, Kevin Strom was indicted on an additional charge of attempting to sexually entice a minor. Authorities said he’d been fixated on a 10-year-old classmate of his stepdaughter’s.

During an October trial on the enticement and intimidation charges, witnesses testified that Kevin Strom sent the 10-year-old girl flowers and presents and wrote a love poem in which he expressed a desire to marry her.

However, judge Norman K. Moon threw out the charges. Though he said there was “overwhelming evidence” that Strom was sexually attracted to the girl, Moon ruled that there wasn’t enough evidence to charge him with attempting to sexually coerce her....Strom will remain at the Albemarle-Charlottesville Regional Jail until his sentencing. He could face up to a decade in prison at his April sentencing in U.S. District Court, though federal guidelines could call for a much lighter sentence.

As a result of this conviction, Kevin Strom is now a registered sex offender upon his release after 23 months in prison (which includes credit for time served before the conviction), as noted here on the Virginia State Police sex offender registry.

Paulie knows all this (as does every person deeply involved with, or knowledge of, the racist movement), yet he appears to have been able to look past this rather significant character flaw and remain friends with Strom.

Which makes Paulie's support for this Facebook cause a little bit awkward:

Okay. This one requires a bit of a double take. Let's go to the source:

Yep. Everything seems to be in order.

Let that sink in for a little bit.

Thankfully (for us anyways), Paulie isn't alone in his hypocrisy. We also noticed two other, "White Nationalists" who supported the cause of not allowing registered sex offenders on Facebook.. The first is Chris Water's good buddy, the "Reverend" Morris Gulett of the Aryan Nations (and a frequent guest of the American penal system himself):

And then there's one of our favorites, the Chairman himself, Kevin "I'm A Leader of MILLIONS of White Nationalists" Goudreau:

And what do they have to do with this? Come on! You know us well enough by this point to jump to the inevitable conclusion:

Really. We couldn't make this up if we tried.

All aboard the fail train! Next stop: Complete and epic failiure!

As a WN I have talked about these idiots allowing Strom to come around again. This is further example as to why this whole white unity thing is a sham! Scum is Scum period.