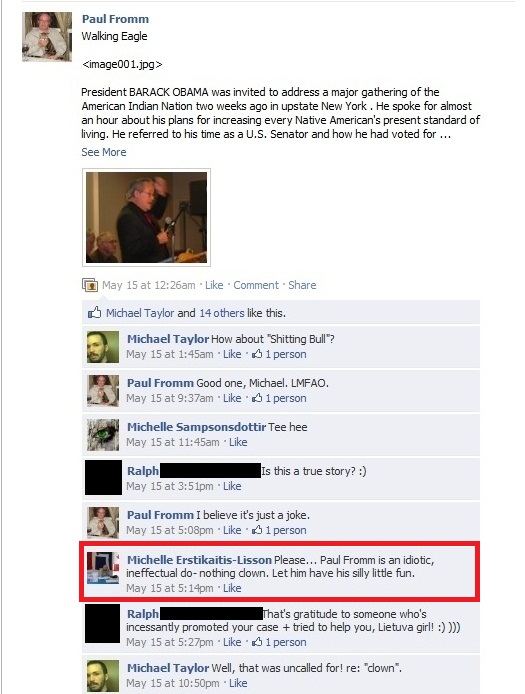 
As for calling you all communist, that was just to make a bit of a point. We are not all Paul Fromm or Kyle McKee. In fact, the first person I would have 'disappear' would be Fromm.. But I'll get back to him shortly.


On to Mr Fromm and your thinking that he is our default suit.
He is a loser. In EVERY aspect. I met him a few times and every time, he irritated the shit out of me.
And you're very right. He's suckering most of us and stealing our money with his half-assed, nonsense. Unfortunately he considers what he is doing, successful.
He is in no way good for us. And there are those of us who get that.
As entertaining as you seem to find the connection between Mr Fromm and those of us who ACTUALLY have a brain, we share very little common ground. We share a dream for out future. His means to get there, what he thinks he can do, is a joke. Absolutely foolish. It's an embarrassment to my brothers and sisters.

Some of his supporters are also questioning why Paulie, who on July 1 was celebrating Canada Day in the special way that he does, ran for a political party who's primary (stated) focus was the destruction of the country Paulie claims to fight for: 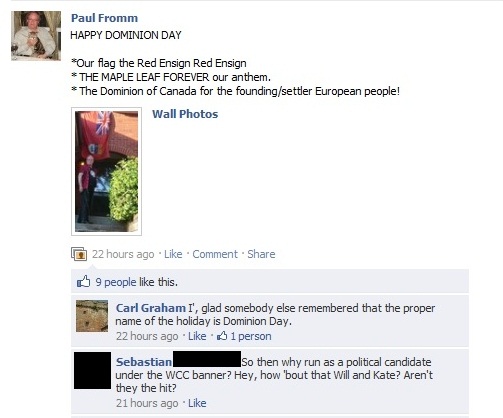 It's gotten to the point that the role of Paulie in the WN movement is now being openly debated on some online hate sites: 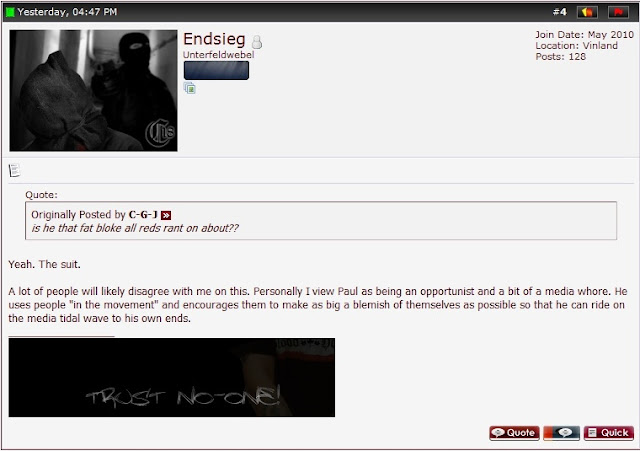 Another uses material from ARC when expressing his opinion regarding Paulie: 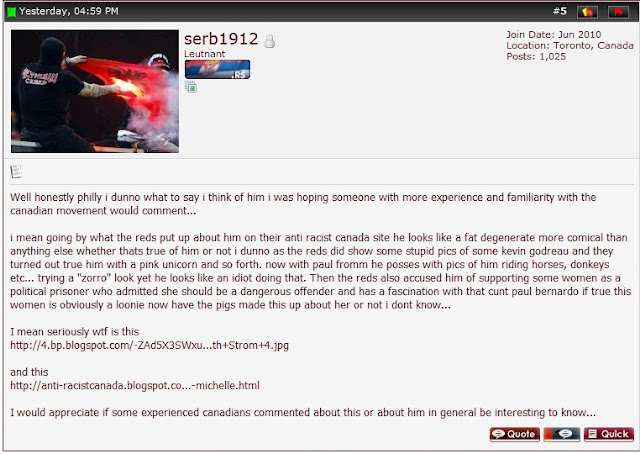 Not that Paulie doesn't have his defenders. Bill Noble actually leaps to Paulie's defence.

Well, "leaps to Paulie's defence" might be a bit of an overstatement. Offers tepid support because he isn't the worst person he can think of at the moment might be closer: 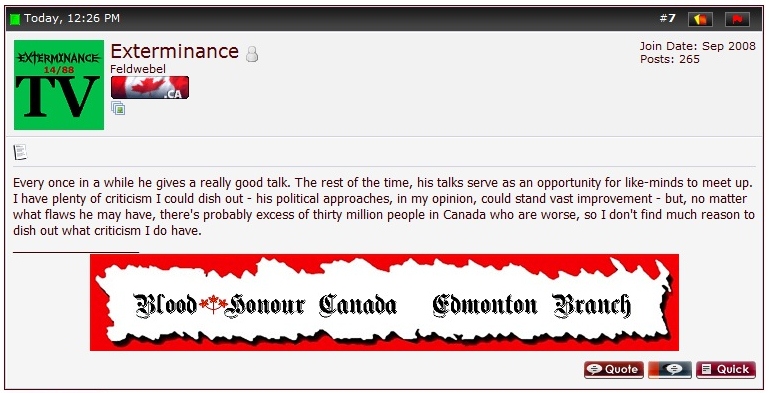 It's interesting that Noble is the one to offer even minimal support, considering that he himself has fallen out of favor amongst his former colleagues. It appears that Billy has gone off the reservation (so to speak) and isn't even trusted by his old friends in the Aryan Guard, or what remains of it. This attitude might be best exemplified in the exchange we saw between himself and, "Endseig" in which they argue about Noble's claims to have disavowed his Canadian citizenship and is thus no longer subject to Canadian laws: 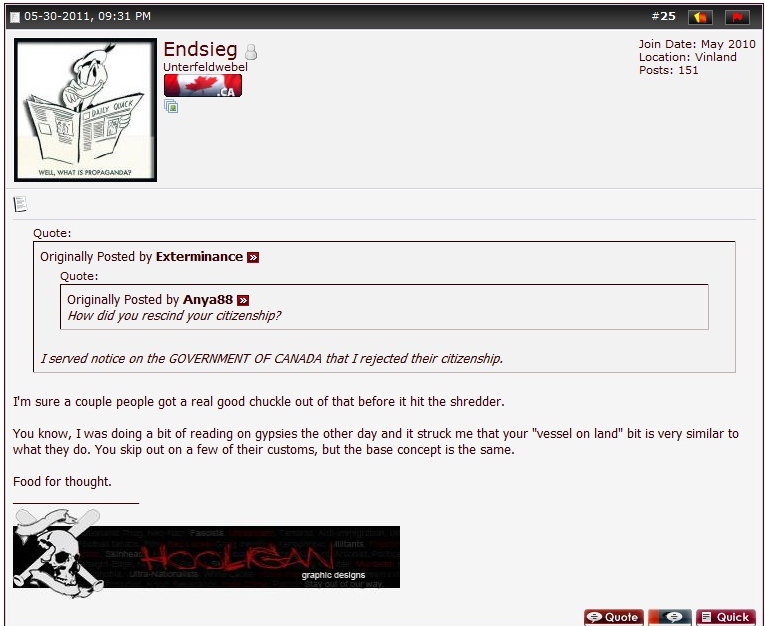 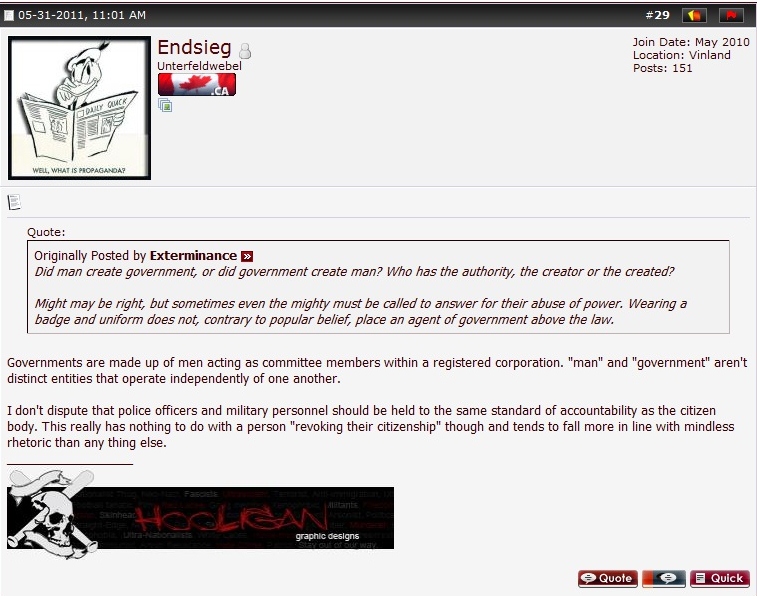 Our Blood & Honour readers (both rival groups) might have further reason to distrust Noble. We had published an article regarding Noble's efforts to get Robert Reitmeier to convince Tyler Sturrup to drop charges against Kyle McKee regarding the IED attack in November 2009. In the message he refers to the rival Blood & Honour group as, "Blood & Dishonour." It seems though that he will change his stance when it suits his purposes. In one of the members only forums on Stormfront, Noble discusses the rivalry with Dan Martin (OdinPatrick) and has some very nasty things to say about the founder of Blood & Honour USA: 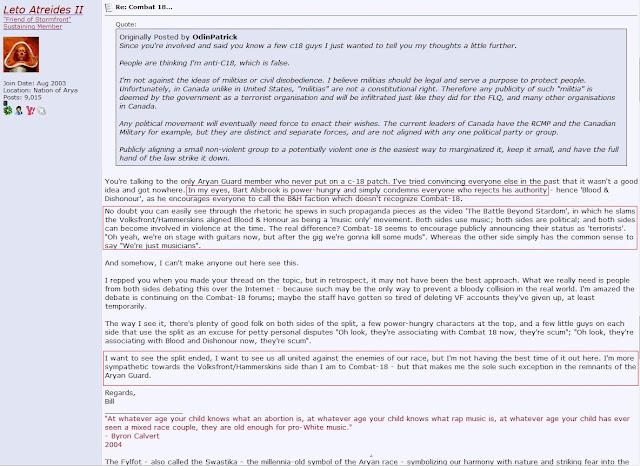 Wow. One moment he is calling them Blood & Dishonour in order to ingratiate himself to one group. Then, in a message to someone else, slams the Blood & Honour/C18 movement and says he feels more at home with the group he previously called Blood & Dishonour.

There really is no, "honour" amongst these people.
Posted by Nosferatu200 at 04:44

It's best - in my opinion - to hope that Fromm stays around the WN / WP movement in Canada. My reasoning is thus: he tames and calms a fair amount of them. So long as he keeps it non violent, keeps taking their money, organizing their talks, etc, he will keep a certain element within that very movement from being overtly political. I suppose this can be considered akin to a beacon of light, a light house, etc.

On the other hand, it's equally nice to see them frothing at the mouth over his spending habits, vacationing, etc. It causes a nice disturbance, really and keeps them from being totally united.

It's a win-win having Paul Fromm around. Whatever he does, we (the totality of rational, anti-racist thinking types) win in the long run.

This ain't surprising. These idiots cannot organize a one man race to a two-stall washroom, much less start a race war.

Bill Noble, Kyle Mckee, Paul Fromm and all their other ilk are no more than really bad jokes...

Bill noble is a skinny little pussy.Hopefully he ends up in jail again.(protective custody) LOL

Luckily for Fromm, the tide has been stemmed just in time:

Apparently, to take their mind off all the internet cat-fighting, these guys went home to pump their prussian blue album, only to find out that Prussian Blue announced they're now liberal pot-smoking hippies that "love diversity". Ruh-Oh! Now, thankfully for Fromm, they're all busy in a Hitleresque-rage ripping all the posters off the wall and pretending they never liked prussian blue in the first place.

Considering that the average neo-nazi wakes up everyday at 5pm,drinks all night, lives in his mom's basement, can never hold down any meaningful job, has never read a book(just witness the garbage they post on Stormfront as proof of this), Paul Fromm may actually be the best of them!!