A commitment to keeping all discrimination at bay

For people around the world, Alberta is seen as a land of hope; a land of peace and prosperity governed by laws that reflect the expectations and aspirations of its own citizens. Alberta stands as a beacon of freedom. It is for this reason that countless sacrifices have been made by those who seek only to share in those freedoms.

Our system of government is built upon centuries-old traditions yet reflects the realities of contemporary society. The same can be said of our institutions of which the Alberta Human Rights Commission stands as a prime example. It is through human-rights legislation that the rights of all citizens are protected and it is in through the work of the commission that peace and freedom, desired by all Albertans, are assured.

Such was not always the case, either for newcomers to our land or for indigenous peoples.

Our province has changed dramatically since then and so too have Albertans' attitudes. We recognize now that in our diversity lies the potential to grow, even greater, the strength of our province.

We also recognize that we must remain ever vigilant to ensure that hardships and injustices endured by our parents and grandparents never again are visited upon any of our citizens. It was for this reason that the Alberta Human Rights Commission was created in 1972, and it has evolved to reflect the realities of today's diverse Alberta society. The success of this evolution is reflected in the fact that recent surveys indicate almost 90 per cent of Albertans believe their human rights are protected.

Those rights continue to be protected by committed and dedicated commission staff with a wealth of knowledge and experience. Recent changes to the commission have included the appointment of Blair Mason, a former Court of Queens Bench judge who brings 23 years of judicial experience to the role of Chief of the Commission and Tribunals.

That appointment brought the implementation of the Tribunal Dispute Resolution (TDR) process to the Alberta Human Rights Commission. Modelled on processes used in Alberta's Courts, but providing the flexibility of the tribunal process, TDR has proven highly effective with an 80-per-cent success rate. Much of this success can be attributed to the guidance of the Commission members who, as accredited lawyers and trained mediators with adjudicative experience, are well able to deal with legal issues that may arise during the TDR process and at tribunal hearings.

In many ways, the commission is initially the "sober second thought" for those involved in a human-rights dispute. Each year, its inquiry line receives calls from those considering making a complaint. Each call is effectively dealt with by commission staff in providing and securing pertinent information. Often, this initial discussion may reveal to the plaintiff that no violation has occurred and the first step in the process becomes that last step. Each year, the number of telephone inquiries totals more than 13,000. Without the commission, even potential complaints would go directly before the courts and one must wonder: Can our courts deal with this increased caseload in a timely manner without impacting the broader role of the judiciary?


If a complaint is found to be legitimate under the current legislation, both sides of the dispute are presented with the option to attempt resolution through conciliation and mediation. This option is accepted in about 90 per cent of cases and has proven to be a highly successful means of resolving conflicts.

With fully 80 per cent of complaints to the commission pertaining to discrimination related to employment, mediation has enabled employers and employees to work through issues which reduce costs to employers and return employees to their jobs. As most of the complaints related to workplace discrimination are based on gender, physical disability or mental disability, the success rate of the Commissions resolution processes are opening doors to a segment of society whose skills and abilities were once overshadowed by stigma or stereotype.

The work of the Alberta Human Rights Commission helps to provide safe, inclusive workplaces aiding in our efforts to recruit and retain the skilled workers we need to build our economy and our country.

As Albertans, we take pride in the positive image of a province that celebrates the diversity of our cultural fabric. For example, we are proud that 10 of the largest communities in the province including Calgary, Edmonton, Grande Prairie and Lethbridge have signed on as partners in the Canadian Coalition of Municipalities Against Racism and Discrimination and we are proud that race, colour, ancestry or place of origin account for only 15 per cent of total complaints brought to the Alberta Human Rights Commission.

Albertans also recognize that public education is key in preventing and addressing human rights disputes. The commission plays a vital role in providing Albertans with the information they need to gain a better understanding of their rights and their responsibilities.

The impact of those efforts can be seen in the fact that since legislative changes were enacted in 2009, there have been no significant issues related to sexual orientation or parental rights.

And the impacts of Alberta's efforts to improve the commission are also evidenced in that neither have there been any significant issues related to freedom of speech.

The work of the commission to educate and inform has created greater awareness and a clearer understanding that only through the equality provided by protection of human rights can we ensure the equality of the personal and collective freedoms we enjoy as citizens.
This is one of history's most enduring lessons. What we have learned from history must guide us in the present and those same lessons we must pass along to future generations.
As minister responsible for the Alberta Human Rights Commission, I am proud to uphold Alberta's commitment to protecting human rights, building inclusive communities and fostering a safe environment for all Albertans so that all might achieve their potential and contribute to their province. The Alberta Human Rights Commission provides the most effective means we have to accomplish our goal. We will continue to work with all Albertans to improve the commission and implement those changes that will ensure a just and fair process that protects and fosters the rights of all our citizens.
In December 1973, then premier Peter Lougheed stated in appointing the new Alberta Human Rights Commission that it was to be "the most important commission appointed by Government."
It was important to Albertans then; it is important to Albertans now.
Lindsay Blackett is minister of culture and community spirit in the Alberta government.
© Copyright (c) The Edmonton Journal
And the reaction, thus far, has been expected: 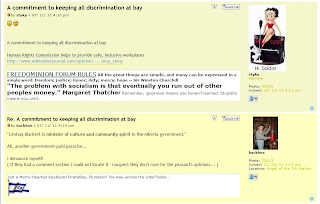 Ezra Levant speaks of the Right of Free Expression, as he puts it ""the right to be yourself"", but he denies that same Right to those Muslim women who wish to cover themselves according to their beliefs. What a Hypocrite!!!

Not only is the original ad on but yes there is a second one featuring the same couples. Sorry Stormfront folks but you failed.