Paul Fromm and the Fine Art of Turd Polishing

We may have engaged in a little bit of schadenfreude concerning Paulie's most recent electoral emasculation (okay, we were practically giddy). After all was said and done, a man who mocked Jason Devine for his vote tally in past elections wasn't able to win more votes than a member of the Communist Party in the most conservative province in a very conservative city.

We don't think even Paulie was so delusional as to believe he would win (though that didn't stop the self-delusion of some of his supporters) but we do think that he would be a little bit embarrassed by the outcome after all the bravado and the claims that he was going to, "stick it" to Conservative incumbent Jason Kenny. This would presume that Paulie actually possesses the dignity and self-respect that allow him to feel embarrassed. Such is not the case as he instead presents failure as success: 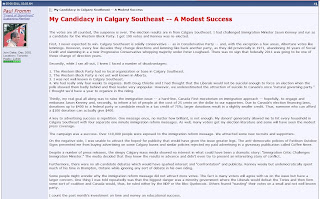 We think most of this is pretty self-explanatory -- Paulie is trying to trumpet the, "success" of his campaign while at the same time rationalizing why he failed -- but there are a few points that we enjoyed reading:

First, I never expected to win. Calgary Southeast is solidly conservative -- as in Consdervative Party -- and, with the exception a few areas, Albertans votes like lemmings. However, every few decades they change directions and lemming-like back another party, as they did provincially in 1971, abandoning 36 years of Social Credit and slamming in a a new Progressive Conservative whopping majority under Peter Lougheed. There was no sign that federally 2011 was going to be one of those change of direction years.

Right. Because any candidate who considers his or her potential voters to be mindless animals is a sure way to indicate to said voters that the candidate respects them.

Secondly, while I ran all-out, I knew I faced a number of disadvantages:

1. The Western Block Party had no local organization or base in Calgary Southeast.
2. The Western Block Party is not yet well known in Alberta.
3. I was not well known in Calgary Southeast.
4. We had really only four weeks to organize. Both Doug Christie and I had thought that the Liberals would not be suicidal enough to force an election when the polls showed them badly behind and their leader very unpopular. However, we underestimated the attraction of suicide to Canada's once "natural governing party." I thought we'd have a year to organize in the riding.

So they were in the same position that pretty much every other party was in when the election was called.

We would also ask our readers to remember that Paulie admitted he ran, "all-out" in this election.

Thirdly, my real goal all along was to raise the immigration issue -- a hard-line, Canada First moratorium on immigration approach...

A, "Canada First" approach to immigration as proposed by a candidate running for a political party that aims to dismantle Canada. Let that bit of logic sink in for a moment or two.

And how embarrassed was Jason Kenney by your campaign efforts? We're sure that he likely wasn't even aware you were running and, based on your vote tally, neither were most of the people in the ridding you were running in.

A key to advertising success is repetition. One message once, no matter how brilliant, is not enough. My donors' generosity allowed me to hit every household in Calgary Southeast with four separate one minute immigration reform messages. As well, many voters got my election literature and some will have seen the modest press coverage.

The campaign was a success. Over 110,000 people were exposed to the immigration reform message. We attracted some new recruits and supporters.

Yes. 110,000 people who were bothered by his automated phone calls. And for all his efforts, he received 190 votes, many of whom may not have actually been aware of Paulie's links to the neo-Nazi movement as was made clear on the Western Bloc Facebook page, though these discussions were deleted by the administrator of the group. Interesting that Doug Christie and his wife (she being the administrator) appear so concerned about the freedom of speech for Nazis, yet so uncomfortable with dissenting views in forums they control.

From 110,000 comes 190 votes which may not have actually been related to the automatic phone calls. Paulie is an advertising genius!

On the negative side, I was unable to attract the hoped-for publicity that would have given the issue greater legs. The anti-democratic policies of Pattison Outdoor Signs prevented me from buying advertising on some Calgary buses and similar policies rejected my paid advertising in a giveaway puiblication called Coffee News.

Despite a number of press releases, the sleepy Calgary mass media showed no interest in what could have been a dramatic story: "Immigration Critic Challenges Immigration Minister." The media decided that they knew the results in advance and didn't even try to present an interesting story of conflict.

Furthermore, there were no all-candidate debates which would have sparked interest and "confrontation" and publicity. Kenney wisely but undemocratically spent much of his time in Brampton, Ontario while ignoring any sort of debate in his own riding.

Long made short, Paulie was irrelevant and was ignored. Still, Paulie at an all candidates debate would have been fun, as Kenney might have reminded you how you and members of the Heritage Front had been booted from the party nearly 20 years before. Ah, good times.... good times....

Some people might wonder why the immigration reform message did not attract more votes. The fact is many voters will agree with us on the issue but have a larger concern. One thing I was told repeatedly was that the biggest danger was a minority government where the Liberals would defeat the Tories and then form some sort of coalition and Canada would, thus, be ruled either by the NDP or the Bloc Quebecois. Others feared "wasting" their votes on a small and not well known party.

Or it didn't attract more votes because of changing demographics? Or because people didn't want to vote for a political candidate so closely linked to a violent hate group in the city? Or perhaps because they rejected Paulie's racially decisive message? There was never a danger of vote splitting in Calgary Southeast. People didn't decide not to vote for Paulie because they were afraid that the Liberals or NDP would come up the middle to win the ridding. They didn't vote for Paulie because he is an anachronism and a side show.

I count the past month's investment on time and money an educational success.

Interestingly, so do we, though likely for very different reasons.

The turd polishing certainly has convinced the true believers though, as indicated on Paulie's Facebook profile:

Right. Paulie, when was the last time you have managed to break the 1000 vote mark in a federal election? And didn't you write earlier that you had already gone, "all-out"?

Our favorite response, which was also in moderation, is by Jonathan Belser... who would also have us know that he IS in a relationship! With a girl! A REAL girl!

Uhm, we aren't sure how you campaign, Johny, but we don't think elections are supposed to cause physical pain unless you are really doing it wrong. On that note though, we had been in touch with Mr. Devine prior to and during the election. Far from pain and frustration, he seemed to be having a pretty good time. We also know for a fact that he didn't spend 1/100th of what Paulie spent on his campaign.

And he still received more votes than Paulie did. The communist. In Calgary. Alberta. ALBERTA.

My parents live in that riding. They were annoyed and offended by Fromm's racist Robocalls which left messages on their answering machine. When I told my mom that he was actually a neo-nazi, the same guy who had marched with the Aryan Guard and supported the people who attacked my friend Jason, she said that she had kind of suspected from the calls.

My parents are pretty much perfectly ordinary, white, relatively conservative middle-class Calgarians, the demographic Paulie was trying to reach. Like most Calgarians, they have co-workers, friends and neighbours of many different races. They weren't fooled by Fromm's racist lies, neither was anyone else.

Fromm and his Nazi friends seem to believe westerners are more receptive to their ideas than people out East and I'm proud to be able to say that Calgarians proved them wrong again. There is nowhere in this country where hate groups can expect to find a hospitable reception.

Delusions of grandeur or possibly grandiosity. Either way Fromm is suffering from some mental illness. He's dangerous and likely off his meds. Besler is just weird and creepy.