The Sound of Silence: Latest in the Warman Defamation Suit

BCL posted on this earlier in the day, though we first noticed it in the early hours of the morning.

We haven't really written about the denizens of Free Dominion for some time (except for the occasional allusion to the website), mainly because we decided that they didn't merit a comment most of the time. Still, we've continued to be interested in the Richard Warman defamation suit filed against the couple who operate Free Dominion, the website itself and a number of anonymous members collectively referred to as the Does appear to have been identified.

All of the John Does, as well Mr. and Mrs. Fournier, have been adamant that they would fight to the bitter end, claiming that this if a free speech issue and that Warman was simply trying to silence his critics.

For one of those John Does, it looks like the struggle ended yesterday: 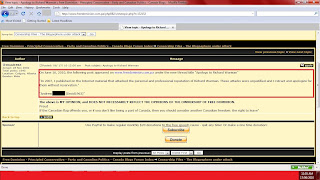 We can only speculate as to the change of heart. Perhaps "Droid1963" worked out some sort of deal with Mr. Warman? Maybe his lawyer told him that the case would ultimately be lost and this is Droid1963's attempt at a mea culpa to try and stem the damage. Or, just maybe, Droid1963 looked at his posts, decided that he had wronged Mr. Warman, and independently posted a genuine apology.

Suffice it to say we were very interested to see what the reaction would be, however when we clicked on the link later, we found this: 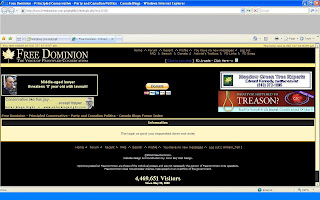 To their credit, the Fourniers did eventually allow the post, however they locked it so that there would be no comments: 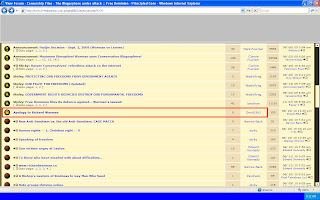 As this website bears witness, there is now a powerful "state within a state," of essentially communist political leanings. You can deny it all you want, but you are every bit as communist as some of your chosen opponents might be fascist, and a good deal more dangerous because while fascists in Canada have very little power, communists have plenty.

Speaking only for myself as a co-defendant in this case, I would never consider surrender or submission to Richard Warman. He has made a grand show of his power and influence, even trying to intimidate people with images and accounts of his military connections.

For God's sake, how stupid are you people, that you don't see what's happened to Canada in the past generation?

But some of us will never give up our freedom. You will just have to kill us to silence us. Let's see if you're really that brave, because I suspect you prefer to hide behind masks, lawyers and noble poses that mean nothing in the final analysis.

"Peter", have you ever considered the possibility that perhaps, just perhaps, you HAVE defamed Mr. Warman and that defamation isn't the same thing as free speech? Just maybe the suit has some merit?

As for power, we here in the Collective run a blog that has between 189 and 634 hits a day. We're sort of a spec in the eye when compared to pull Free Dominion has, and yet they seem to pay an inordinate amount of attention to us; at one point there were six threads running simultaneously in which we were one of the prime discussion points.

Have you considered the "power" we "leftists" wield is a figment of your own imagination and as a cynical effort to create enemies that really don't exist?

Do you know the first time we ever heard of Free Dominion? It was soon after we posted an innocuous comment on BCL's blog. Next thing we know, we're sent a message from someone saying that Connie is claiming the ARA supports BCL. And although we have, time and time and time again, stated that we aren't the ARA and we don't support vigilantism, the meme continues. And it is absolutely laughable? So why insist on something that is false? Maybe because it perpetuates the illusion of some great far left cabal that is out to get you, thus preventing the introspection that might occur which might result in the realization that you might just be the authors of your own misfortune.

Or perhaps we are part of a state within a state and we're out to force you into collective farms. Either way, right?

nos - didn't you know that Anti-Racist Action is secretly run by Richard Warman who, in turn, isn't really based at DND but rather works out of a secret office in the Trudeau family crypt in Montreal where he talks to Pierre regularly via seance in order to receive instructions on how to use the HRCs to implement a Communist regime in Canada.

The situation we face in Canada is more political than legal. When people have very different concepts of what is "right" and "wrong" then where the state arbitrarily draws boundaries may only satisfy one group and not the other.

Canadian conservatives feel that they have seen their country stolen and altered beyond recognition, in many ways through illegitimate political processes that never consulted the people for their approval and sanction.

Sure we may have had a change of government, but the man now in charge has reneged on promises made to conservatives on free speech, Section 13, climate fraud and other key issues. We are still like a large minority or perhaps even a plurality of the population without adequate political representation. We are reluctant to go back to the division situation because that caused the anomalous political situation in Canada from 2000 to 2005 during which time many of these dubious laws were passed.

Richard Warman is seen by many conservatives as a sort of opportunist cashing in on the human rights legislation, and is perhaps the prime example of a larger group of people that this blog speaks for, whether it has a lot of hits or not, and this is why we monitor it and comment here (or try to, not everything that we say is reported). Until recently, Richard Warman was only an anonymous participant on the internet and this tended to be the closest thing to his internet home. Even now, there is nothing interactive about his website.

I don't think that I can really defame anyone in Canada who believes in political correctness, because I tend to see them as being dead wrong about important spiritual and political questions going right to the heart of what freedom and democracy really mean and how they should really operate. Therefore whatever we all say about our opponents, it tends to be more of a comment on all, perhaps these things often end up in sectarian clashes in other countries, but our tradition is to go at it verbally in the political realm.

This idea of fighting political battles in a court of law (my opinion, I mean how do you prove this legally?) is to me a serious breach of the unwritten rules of the game, and probably explains why some of the high priests of the human rights movement are not universally supported by the progressive movement, or at least are looked at as being "high maintenance" type people.

I would never vote for Jack Layton or Bob Rae, but I don't see them fighting their political battles in a court of law where you can propose to "win" a political contest by out-lawyering other people. This to me is some sort of reductio ad absurdum of the already dubious concept of having a House of Commons populated largely by lawyers in the first place.

People want their freedom, and are willing to tolerate a bit of obnoxious intolerant offensive speech to have full freedom, otherwise, as I said before, we establish the dangerous principle that well-placed civil servants have the right and duty to tell everyone else what to think, even interfering in religious freedom when they feel it necessary.

I'm sure the people who fought the Russian Revolution had similar lofty self-valuations, and progressed in stages to a gulag and a police state that was actually worse than its principal adversary, everyone's favourite whipping boys, the Nazis.

That's all I'm saying, and if that's worth thousands of dollars in damages and an even more comfortable lifestyle for a privileged and well-placeed Ottawa insider, then I'm Kublai Khan on a bicycle. But the funny thing is, I have nothing anyway, the Canadian state decided to make an example of me long before most of the rest, so Richard Warman is wasting his time -- blood from a stone, essentially.

By the way, I'm no kind of racist, I'm an immigrant myself, and I know that racism sucks, but so does censorship.

I would add, saying that the left has no power in Canada is like saying we don't have cold weather in the winter just because palm trees grow in Victoria. I mean, come on, the whole spectrum here is so far left that maybe to actual communists it seems different, but to conservatives, the country seems like a voluntary communist state. -- POD

Perhaps your views are so outside the mainstream that "moderate" points of view are radical by comparison to your own views? If you really, truly believe that the NDP or Liberal Party are quasi-communists, then I fear the nation that you would want to create. We think most Canadians would fear it as well. That must really frustrate you.

We have no idea about Warman's personal life, but we have a hard time believing that these actions have resulted in the financial windfall you seem to believe he has accumulated. What does it say on his website? Around $95,000? Over how many years? And after considering personal expenses? We would hardly think it was worth it if it were a matter of financial interests.

We also never said the left has no power. We would suggest that left in Canada at this moment have more influence than the right, as Canada and Canadian values tend towards more modern liberal values. We merely suggest that this blog might not be the Goliath to Free Dominion's David that you and the others seem to believe.