As the United States barrel towards an election which may very well decide the future of the democratic experiment in that country, extremists such as the Proud Boys (among others) have ramped up the violence in both rhetoric and action with Portland being one of the key flash points:

We can confirm that officers have conducted a traffic stop of a vehicle leaving Delta Park. The officers took possession of firearms, paintball guns, baseball bats, and shields. At least one criminal citation was issued. pic.twitter.com/rtJhzeCcv1

The rally is for Kyle Rittenhouse, the Kenosha shooter who killed two and injured a third, and Aaron 'Jay' Danielson, a right-winger shot dead in Portland by an antifascist.

Some have outfits printed with both names. pic.twitter.com/tHlC492Uis

Man pushes live-streamer to the ground and kicks him in the face at Proud Boys is rally in Portland pic.twitter.com/SAdHShqir3

While Canada has not yet seen the level of violence associated with their erstwhile American counterparts, the Canadian Proud Boys, after being more or less moribund for a couple of years but for a couple of chapters in Ontario, appears to be growing and spoiling for a fight.

In Calgary on August 27, Proud Boys showed up to counter-protest a BLM/Defund the Police rally at City Hall: 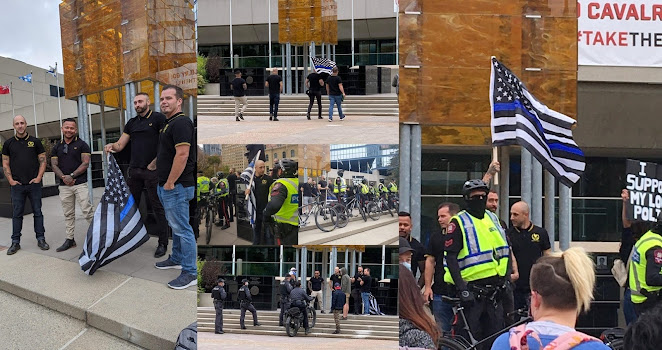 A member discussed the reason for their presence on Reddit later that week as well as the rationale for carrying an American "Back the Blue" flag: 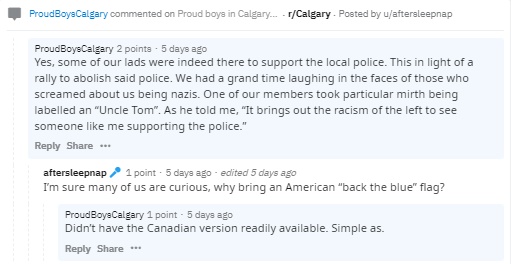 Based on the Alberta Proud Boy website, it seems that they have difficulty distinguishing the differences between our country and our southern neighbours: 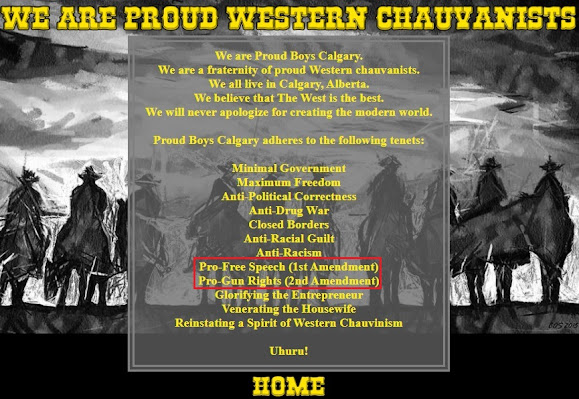 August 27 was the first time, at least to our knowledge, that the Proud Boys had made a public appearance in the province aside from some very brief instances in 2017 and 2018 and those instances were mostly of outsiders. Since this first public appearance they have been busy. On September 22, members left a banner on the pedestrian overpass, eastbound Glenmore by the golf course. Earlier flyers attributed to the Proud Boys were found in Edmonton: 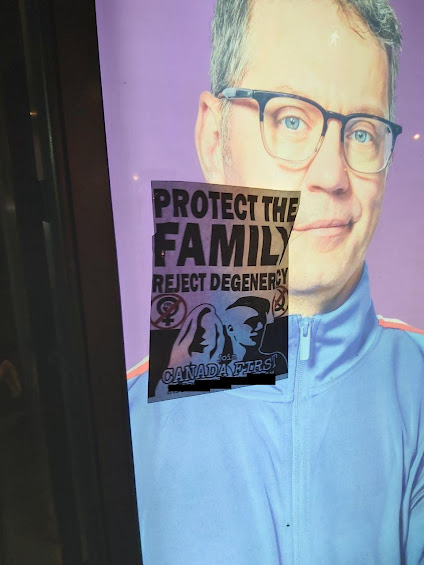 Finally it appears that some people, either members of or affiliated with the Proud Boys, were in attendance at the Red Deer counter-protest on September 20 as evidenced from their Telegram chat which will be referenced frequently through the rest of this article: 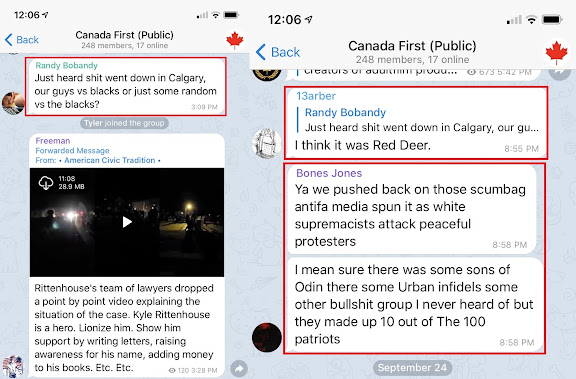 The group has also been active in other locations including in Winnipeg where a chapter had existed but which had been for all intents and purposes kicked out of town as well as a number of communities in Ontario: 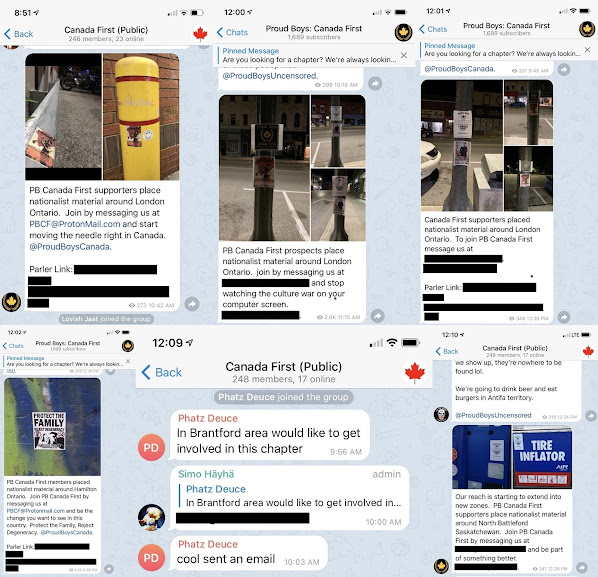 It is then interesting to note now that the Proud Boys in Canada have, by and large and with only a remnant adhering to the "civic nationalist, western chauvinist" window dressing of the American movement, come out as overt fascists, anti-semites, and white supremacists.
This shouldn't be entirely surprising as we had already seen the Canadian movement going in this direction. In July 2017, a rally in Toronto to show support for the Proud Boys in Halifax who disrupted an indigenous ceremony took place. One of the attendees was white supremacist Paul Fromm who was also given an opportunity to speak: 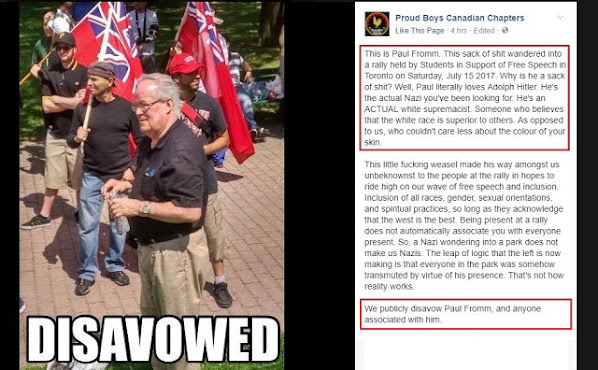 Though the national Proud Boy leadership claimed to "disavow" Fromm a number of Proud Boy members voiced support for the old bigot and formed the "rebel" Proud Goys: 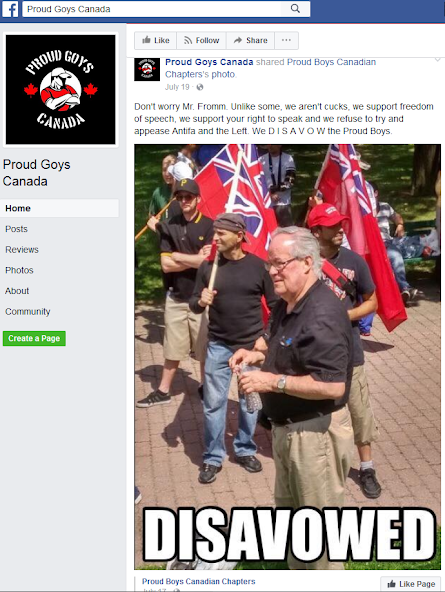 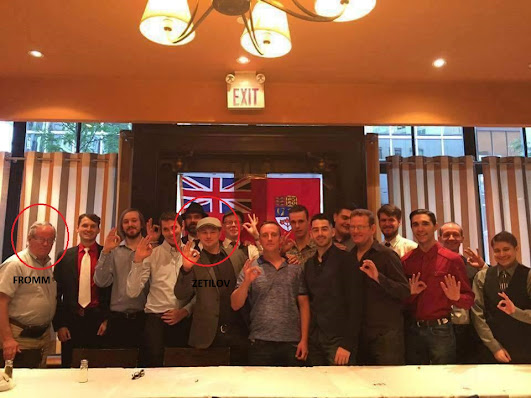 A few years later the rejection of Fromm my the larger Proud Boy movement would be called into question when a number Proud Goy members seen in this photo accompanied Proud Boy elder Tim Kelly to Hamilton less than a year later: 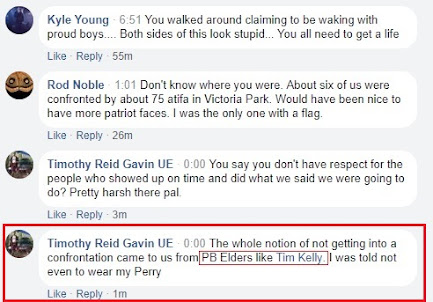 If there were any lingering questions about the views of the Canadian branch of the Proud Boys however, they seem to happily answer them in full here:

In fact the Canadian Proud Boys have been overt in their racism and anti-semitism for some time including their continued promotion of Faith Goldy, ID Canada, Northern Dominion, and other hate groups: 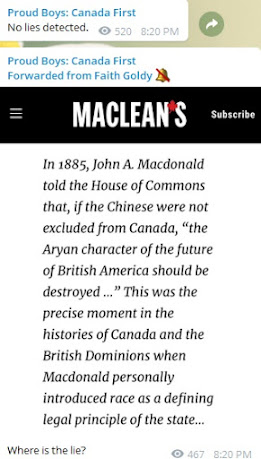 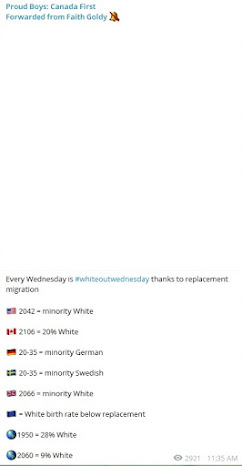 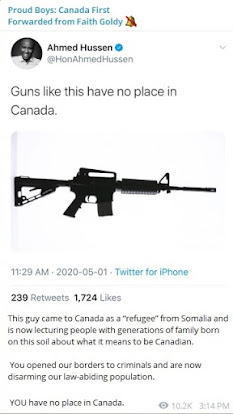 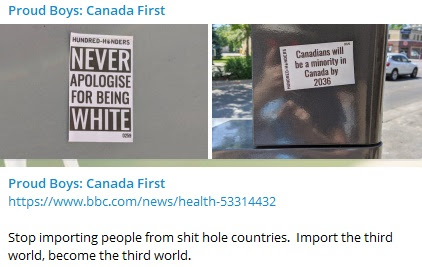 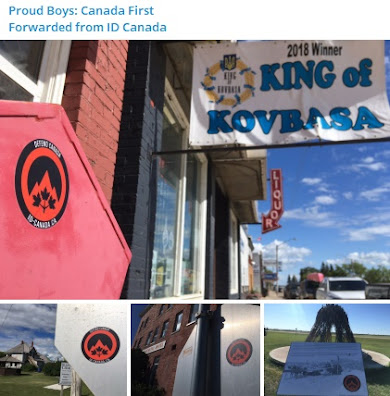 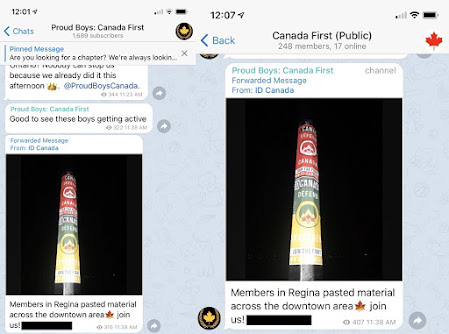 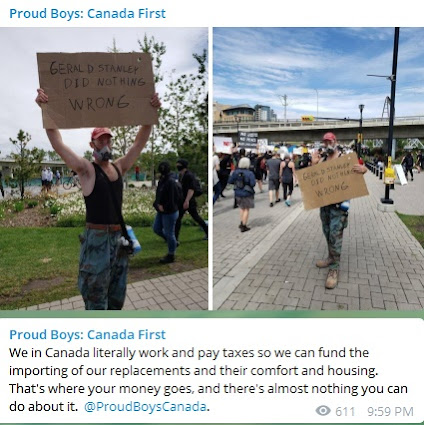 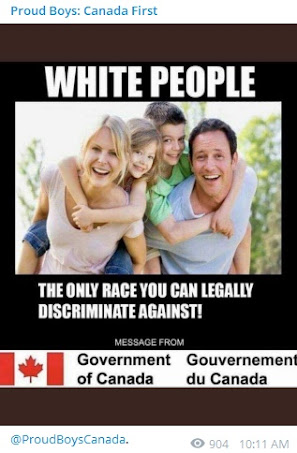 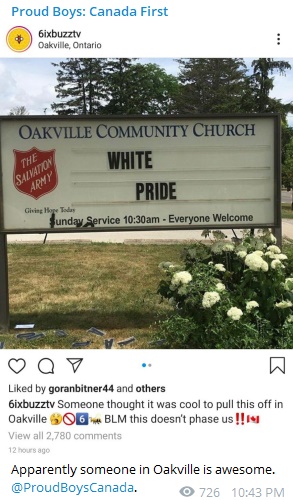 Their anti-semitic beliefs are also on full display: 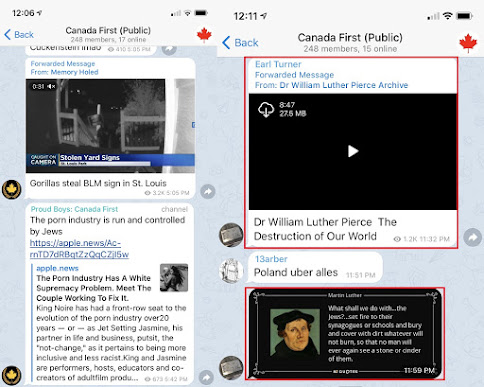 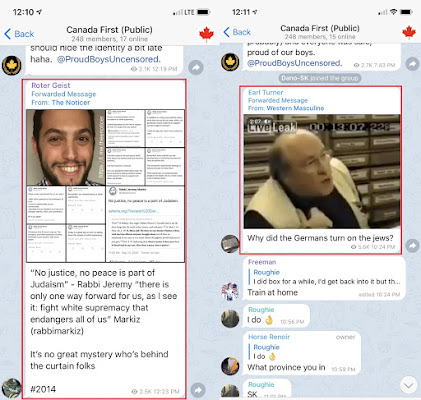 To be clear, it doesn't appear that the Canadian Proud Boys are Holocaust deniers, but that isn't a virtue. They appear to acknowledge the Holocaust occurred and are happy that it did: 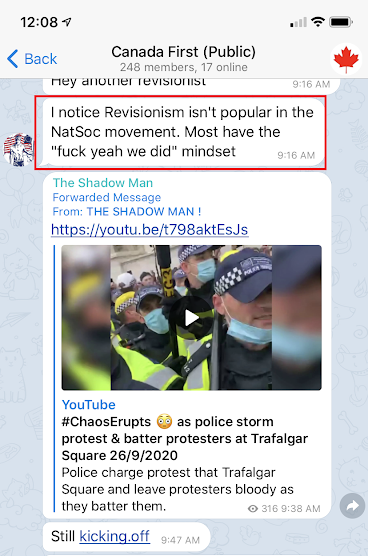 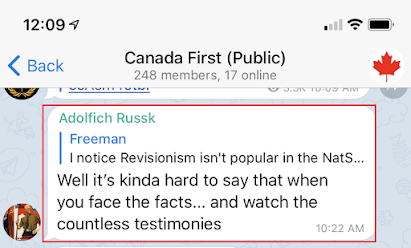 As noted earlier, the Canadian Proud Boys have not yet engaged in the levels of violence that their American counterparts have which isn't to say that they don't promote, celebrate, or prepare for violence however: 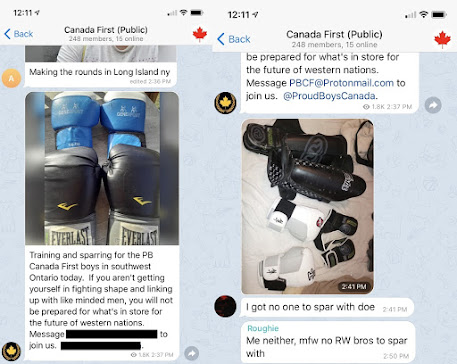 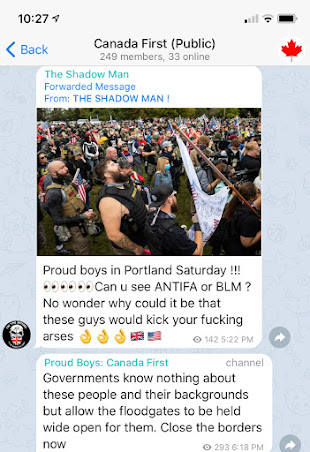 However, after the presidential debate on Tuesday September 28, this propensity for violence has become much more serious:

Here is Trump refusing to condemn white supremacy, the greatest domestic terror threat facing America according to the FBI.

Instead, he told the white supremacist Proud Boys to “stand back and stand by.”

Don't believe me? They've just made it their slogan. pic.twitter.com/hB9s1oFTw1

This further escalation in rhetoric combined with the tacit approval by the President of the United States for the violence committed by the Proud Boys in the United States can only serve to further embolden not only American extremists, but extremists elsewhere including this country.
Posted by Yellow Vests Canada Exposed at 22:54