Point A to Point B: Did A Series of Anti-Refugee Posts on Social Media From Far-Right Figures Result in Attempted Murder?

Back on September 28, Ronny Cameron, Georges Massaad, and Leigh Stuart posted a video of themselves in the Radisson Toronto East Hotel which has been temporarily housing refugee claimants. The trio purported to be there film an exposé of the conditions of the hotel, claiming that the building was being destroyed by ungrateful migrants. I watched the video at the time and despite their histrionics throughout, what they "exposed" was a generally run-down hotel in need of a face lift with a few smudges on the wall and garbage bins with, and this will come as a huge shock I'm sure, GARBAGE in them!!!! 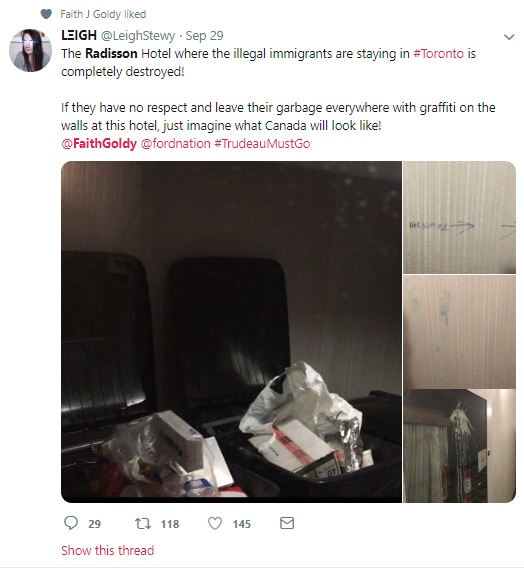 I won't post the full video, but there are two clips which to me suggest that the trip might not have been entirely honest: 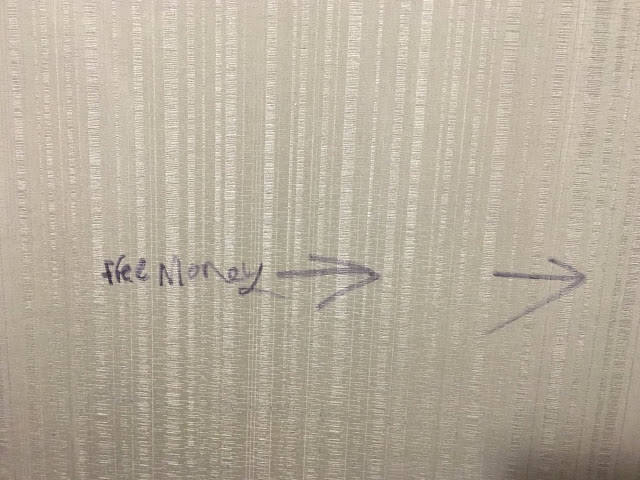 I would add that Cameron was alone when he "found" this on the wall and called the other two over to shoot the video.

Suffice it to say I'm somewhat skeptical, though it does tick off one of the paranoid beliefs of the anti-refugee crowd so they'll accept the claim without reservation: 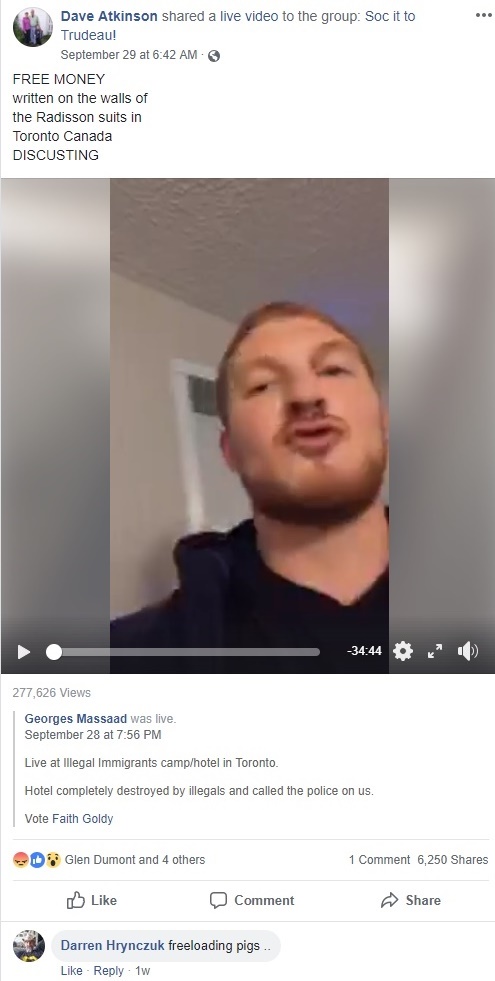 I wasn't going to even discuss the video since I didn't want to give them any sort of oxygen, but subsequent events have made me rethink that decision.

Among the other social media slurs against this particular Radisson Hotel and the refugee claimants within was a concerted effort to post negative reviews. It is a phenomenon we've seen elsewhere as the far-right has tried to hurt businesses who are acting in ways that they oppose. Most of the fake reviews were incredibly transparent: 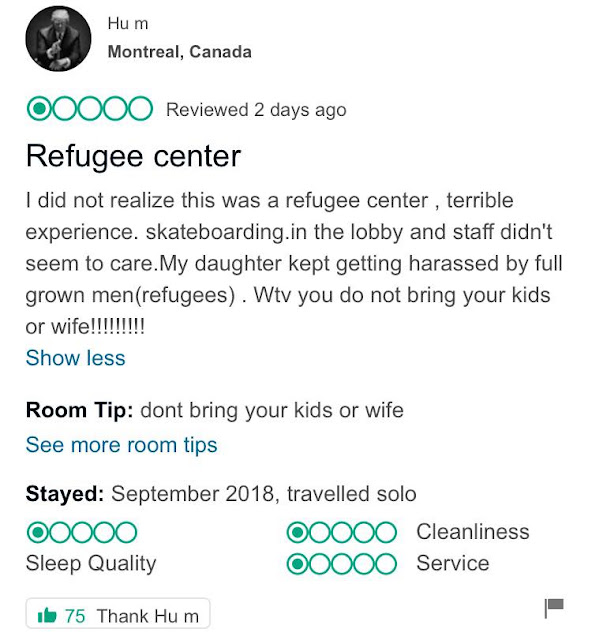 One however was so patently ridiculous that it is hard to believe anyone would take it seriously. A fake reviewer purporting to be from Virginia claimed that residents were slaughtering goats in the public bathrooms.

This all might have ended here, but then racist mayoral candidate Faith Goldy and Sue-Ann Levy of the "Toronto Sun" entered the picture, the former "liking" Stuart's Twitter post and the latter being included in the Twitter thread to make her aware of the content: 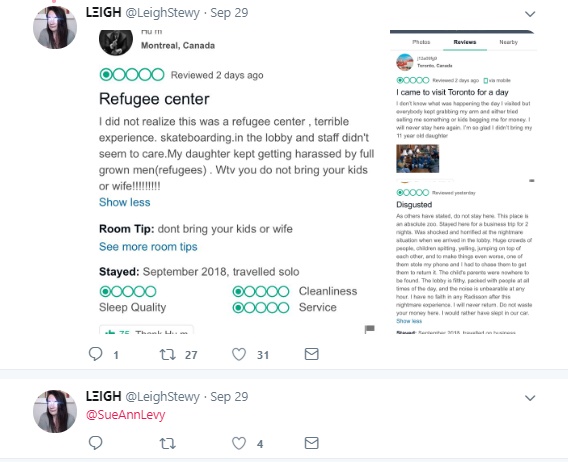 Being picked up by two bigoted Islamophobes, the results can't be regarded as surprising. Goldy chimed in repeating the lie about the goat slaughter, followed by a protest outside the Radisson Toronto East Hotel: 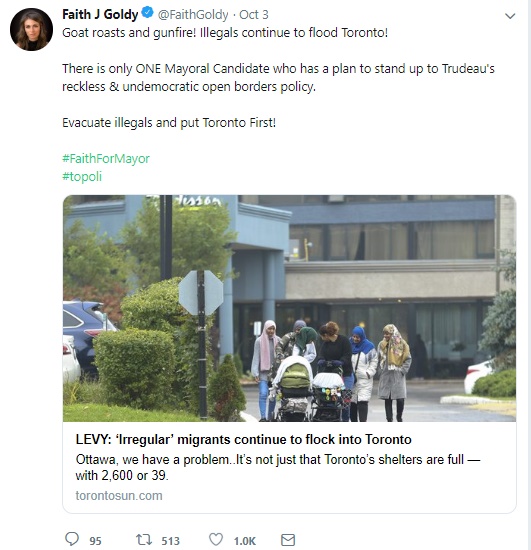 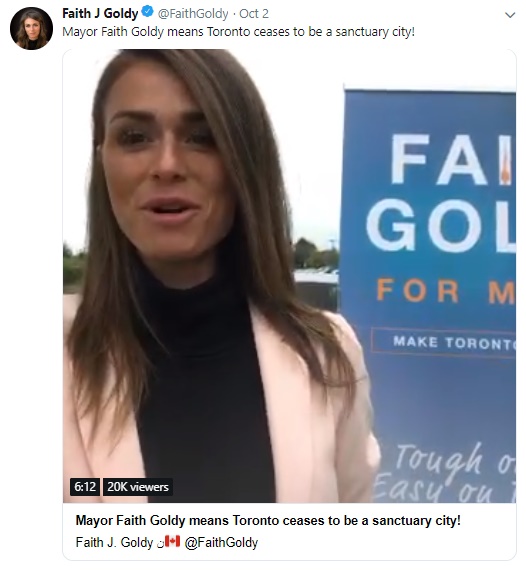 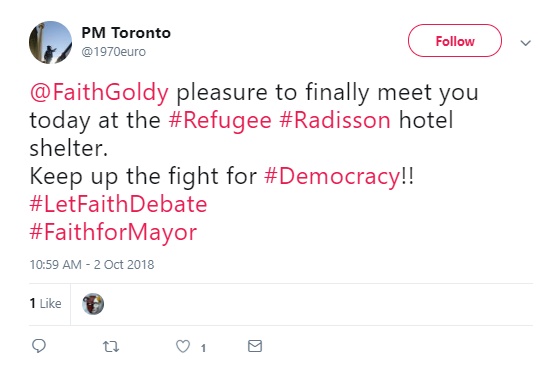 Sue-Ann Levy wrote an article for the "Toronto Sun" and published the erroneous claim: 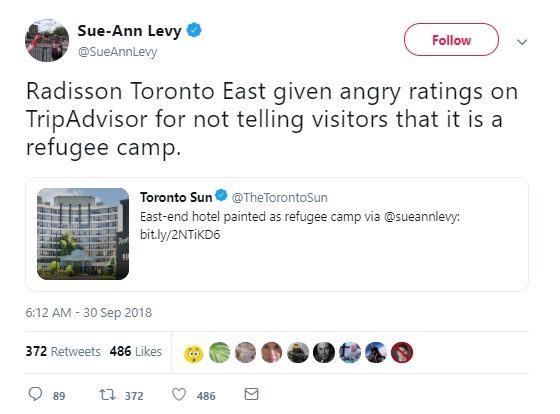 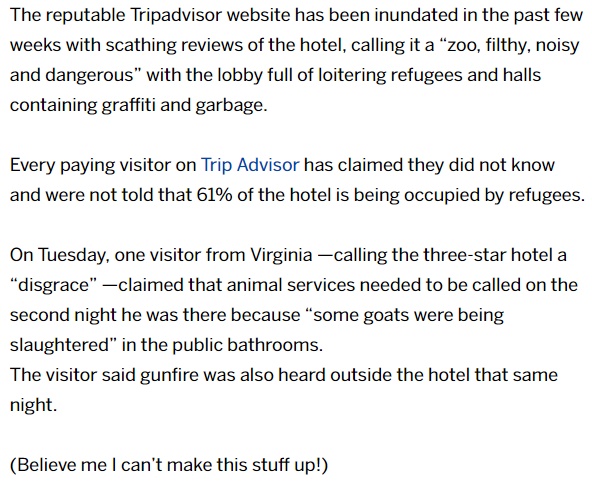 Well, Levy might not have made it up, but it was made up and she doesn't seem to care that it was.

Other far-right "media" outlets picked up on the story and uncritically published stories confirming the worst prejudiced of their readers: 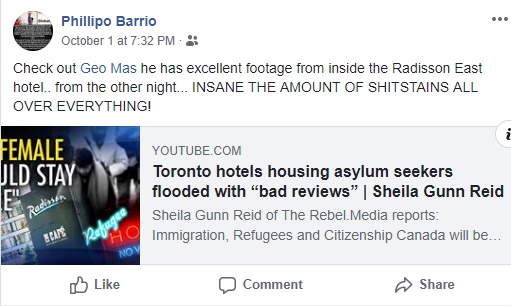 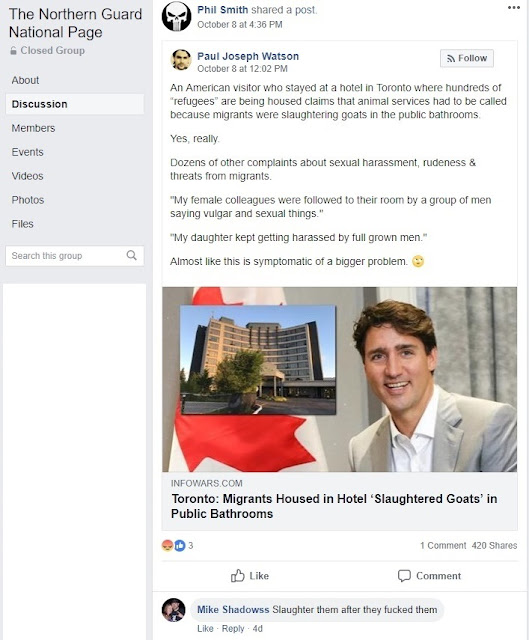 Ultimately, it appears that it was the Levy article that resulted in the goat slaughter lie going viral:

Asylum seekers have been temporarily housed in some Toronto hotels while awaiting permanent lodgings. As a result, the Radisson hotel in the city's east end has been inundated with bad reviews and drawn the interest of far-right and anti-Muslim figures.
— ishmael n. daro (@iD4RO) October 11, 2018

But @SueAnnLevy's column on Oct. 3 made it go mainstream, based primarily on the unsubstantiated claim that "some goats were being slaughtered" in the hotel's public bathrooms. Levy took that from a TripAdvisor review without any apparent effort to corroborate the claim.
— ishmael n. daro (@iD4RO) October 11, 2018

It then perhaps shouldn't be surprising when this happened:

1. Spent all yesterday at the Radisson Hotel Toronto east near Victoria Park and Consumers, which is helping house 577 #refugee claimants. The place has been the site of harassment as of late, including an act of arson. #Torontohttps://t.co/E89JRH5ofC
— Steven Zhou (@stevenzzhou) October 12, 2018

2. Most attention as been focused on the arson attempt last Tues, which occurred right after fringe mayoral candidate Faith Goldy held a press conference outside of the hotel. The police have since released a photo/description of the suspect. pic.twitter.com/5GBK4i1jEE
— Steven Zhou (@stevenzzhou) October 12, 2018

3. The individual in question is a woman, about 5'6"-5'8". She entered the hotel at about 1030pm last Tues. She allegedly had a gas canister. A rag was then stuck in the nozzle, lit. This set off the alarm and an alert worker tracked down the can and kicked it into the stairwell.
— Steven Zhou (@stevenzzhou) October 12, 2018

4. I spoke to several of the claimants at the hotel yesterday and obv the arson attempt shook them. But of even more concern is how they've been harassed lately by members of the media, along with far-right trolls trying to portray the hotel as a chaotic "refugee camp."
— Steven Zhou (@stevenzzhou) October 12, 2018

5. The day after the Goldy presser and arson attempt, the Toronto Sun published a piece by Sue-Ann Levy claiming that the hotel was a hellish migrant camp, full of entitled asylum seekers who trashed the place. Her evidence: TripAdvisor reviews--one of which claimed goats were
— Steven Zhou (@stevenzzhou) October 12, 2018

6. being slaughtered in the hotel bathrooms. No facts back up this claim and the hotel staff have not coming across anything like that. https://t.co/5ASAun3Z4J
— Steven Zhou (@stevenzzhou) October 12, 2018

7. More concerning is how Levy's piece features an image showing the faces of women staying at the hotel. They're shown in a group, walking with a couple of strollers. The publication of their faces as been taken by the claimants as a serious breach of their privacy and security.
— Steven Zhou (@stevenzzhou) October 12, 2018

8. The point is that many of these claimants have escaped their countries of origin to escape persecution. In their mind, there are ppl out there who want to do them harm. Publishing their faces/whereabouts online could potentially expose their whereabouts.
— Steven Zhou (@stevenzzhou) October 12, 2018

9. I found out that this ongoing concern is much greater than fear of security breaches within the hotel. Security has already been beefed up inside the building. But claimants have now been told to report anyone who approaches them with questions or a camera, etc.
— Steven Zhou (@stevenzzhou) October 12, 2018


We don't know if this was as a result of the negative false news stories that have been published, but it certainly hasn't been ruled out.

Thus far the media has been referring to this as attempted arson, but given what could have happened I have no problem calling it attempted murder, whether that statement is supported legally. Got to call 'em as I see 'em.

10. Claimants were also approached by three far-right trolls (including white nationalist Ronny Cameron and Hamilton Heckler Leigh Stewart) on Oct 28. They went around the hallways with cameras, documenting the "Migrant Camp" that is supposed to be the Radisson.
— Steven Zhou (@stevenzzhou) October 12, 2018

11. They uploaded the video onto Youtube the next day. It shows them going up to ask several hotel workers and claimants about "shit on the wall." When asked by one claimant to stop filming, they refuse.
— Steven Zhou (@stevenzzhou) October 12, 2018

12. This, along with the Sun piece and the arson attempt (among other things), have resulted in claimants feeling like they can't leave the hotel, for fear of further unwanted exposure.


It wasn't long before Stuart and Massaad responded on Facebook:

Later the two posted a video stating they would be going online later that night with Cameron to discuss the incident:

Cameron re-posted the link to his video on numerous far-right Facebook groups. All of the comments left provide insight into the dark underbelly of the racist, anti-refugee, anti-immigrant, and Islamophobic movement in this country: 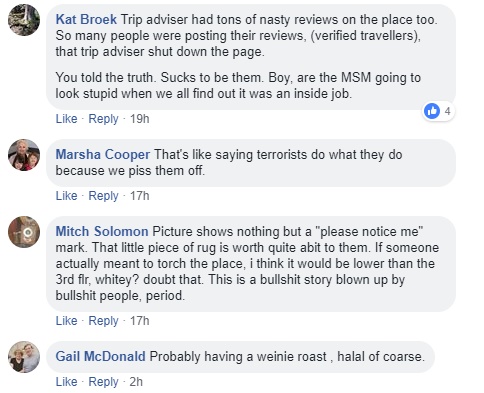 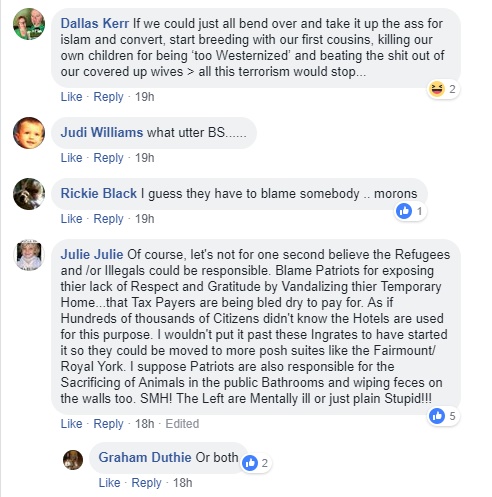 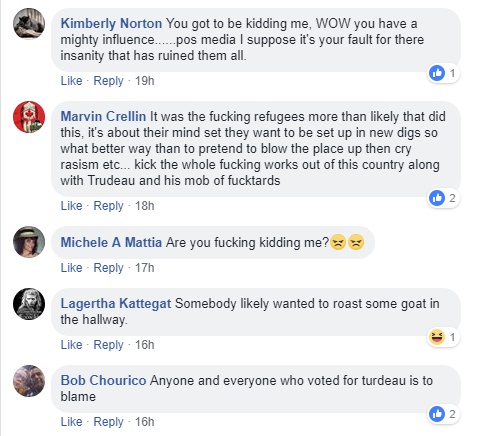 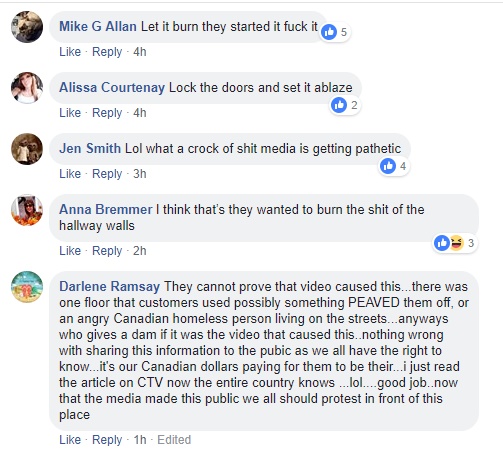 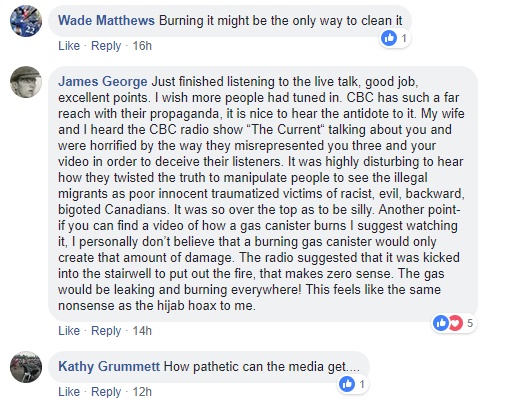 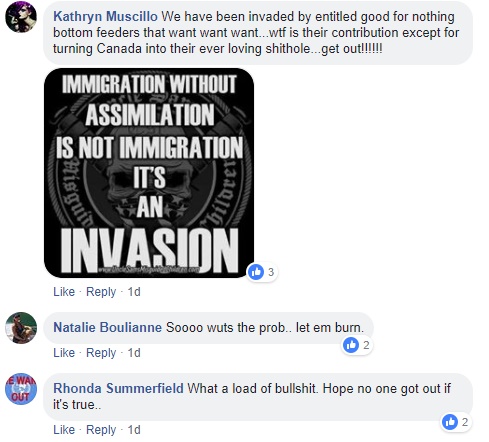 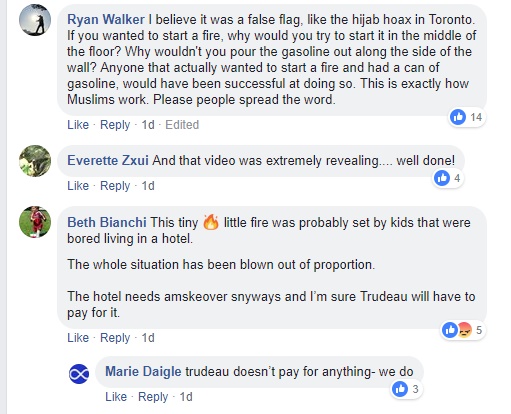 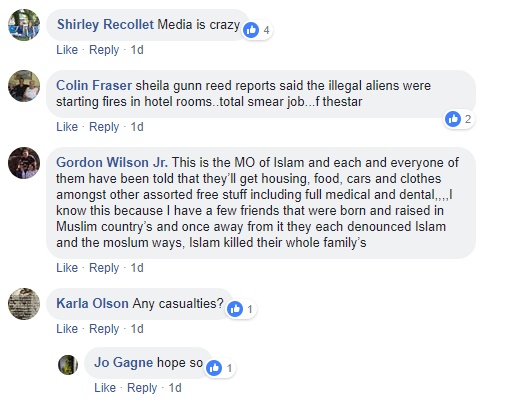 I think Bruce Arthur has the best final word (for now) on this issue:

It's not a game. There are people in Canada trying to make money off fearing and hating refugees, people who are desperate, and aren't white. And @TheTorontoSun and @PostmediaNews should address what @SueAnnLevy wrote and they published, twice.
— Bruce Arthur (@bruce_arthur) October 13, 2018

A new profile for Trenerry just popped up, TJ Trenerry.