Last week it was reported that Paul Fromm, a white supremecist who has been involved with almost every neo-Nazi and racist movement of the past 50 years (from the Edmund Burke Society/Western Guard through the Heritage Front and up to Blood & Honour and Proud Boys today) had endorsed social-conservative Tanya Granic Allen for the leadership of the Progressive Conservative Party of Ontario. While it did take her about 24 hours, she rejected the endorsement and condemned Fromm.

More recently, another Progressive Conservative leadership candidate received the endorsement of an infamous hate-monger. In fact it isn't even the first time this individual has been linked to conservative politicians in the midst of a leadership race: 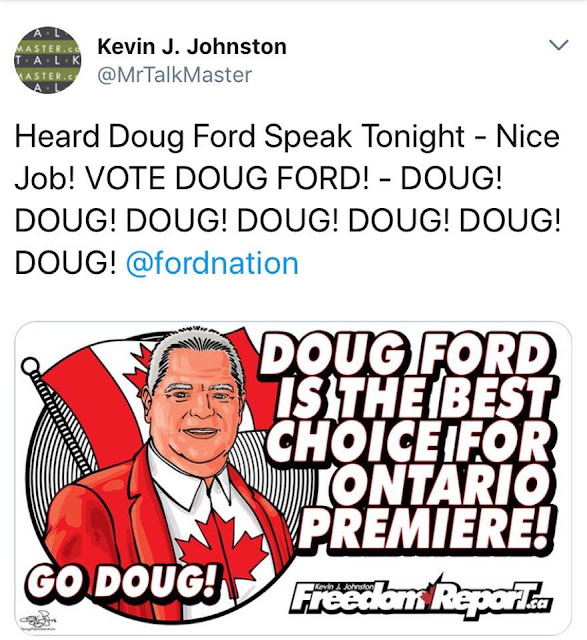 ARC has written about Kevin "Poodle" Johnston in the past, including his claims to have been assaulted by "Antifa" at a rally in Ottawa in June 2017 leading to the arrest of some individuals; many of the claims made by Johnston's were wildly inconsistent and were challenged by the police and the crown eventually dropped the charges against the four men citing lack of "credible" evidence.

Johnston, a perennial mayoral candidate with, shall we say, a creative understanding of the truth, is a well-known Islamophobe who uses his YouTube channel to vilify Muslims and immigrants and has encouraged acts of violence:

In July 2017, Johnston was charged under Canada's hate crime laws.

And here he is in the front row of a Doug Ford event:

Not sure what the rod is that he's holding, but I suspect that it probably should not have been permitted in the room.

So will Ford condemn Johnston and his presence at his event? We'll see.
Posted by Nosferatu200 at 13:03