We here at ARC catalogued a few of these incidents in a time line stretching back to the early 1980s. Some more recent events include the alleged murder of a handicapped man by members of WEB, the violent assault of minorities in Vancouver, the frequent firebombing (followed by a home invasion and assault) of Jason Devine and his family, assaults committed by members of Blood & Honour in Edmonton in both 2011 and 2012, the murder of a neo-Nazi by another racist in Collingwood, and so many other cases that we would simply direct you to our timeline.

If we were to replace, "white supremacist" with "radical Muslim" and accuse radical Muslims of the same crimes that have been committed by the boneheads in this country, we suspect that Mr. Coren would use these crimes as proof as to why Islam is dangerous. He would rightfully point to a pattern of violence by radical jihadis and demand some sort of government response to ensure the safety of citizens. But because they are not radical Muslims committing these violent crimes, it's not something to be concerned about?

Moreover, if we were to look at the United States, we would see that that the threat of homegrown, right-wing extremists is every bit the threat that Muslim extremists are. And, like in Canada, this threat is being ignored and except for a few high profile incidents continues to be ignored (and outright rejected as a problem) even as the crimes and, sadly, body count, rises.

But even this pales in comparison to what is happening across the pond:
As with our timeline, this is not even close to being an exhaustive list. And these are the people that the boneheads on this side of the Atlantic admire.

Like street gangs in Toronto or other urban centers, it's unlikely that most of us will ever be affected by neo-Nazi violence. It is unlikely that any neo-Nazi group will achieve a great deal of political influence (though the rise of Golden Dawn in Greece is worrisome). But that doesn't mean that white supremacists are harmless or that they are not a threat to social cohesion and it doesn't mean that they should simply be ignored.

In what seems to have almost been a bit of an aside near the end of the interview, Mr. Coren asked Mr. Murphy if he felt Holocaust denial should be made illegal. Though Mr. Murphy did respond honestly and without slighting him, we discovered a person who much more eloquently describes the real danger hate speech poses to groups and individuals:


Denying the Holocaust is not an historical argument made in moral isolation. In other words, it is not akin to saying Napoleon didn't speak French, Charles Lindbergh couldn't fly an airplane or even that Queen Victoria was a pickled cucumber. They are absurd and easily contradicted, but have no serious consequences.

Holocaust denial does. Its intention is not so much to dispute a fact as to bring hatred on a specific group of people. If the Holocaust did not happen, the world has been lied to and deceived. By whom? The Jews, of course. For the purpose of establishing the state of Israel, gaining world sympathy, gaining compensation from nations who actually did nothing wrong at all. Thus, the Jews are evil and wicked and should be treated like any other evil and wicked people. In short, they should be persecuted and killed.
...
Let us say I established a Web site stating that you, dear reader, were a pedophile who kidnapped and raped small children. That you stole money, beat your wife to a pulp. Then I put your phone number and address on the site.

You'd be very angry, if still alive, and would accuse me of breaking the law and acting immorally.

You'd be right. Imagine, then, how it feels for an entire people to be called even worse. To be called diabolical liars who are so dark and base they have led a malicious double-life for half a century. It can be proven that Holocaust denying Web sites seduce people into Nazism, anti-Semitism and violence. A lie that leads to horror.

Surely this is not the stuff of mere liberty.

I have also yet to meet a defender of Zundel and so-called Internet freedom who has not threatened either litigation or violence when opponents have used their freedom of speech to oppose them. Which makes the Zundelites either hypocrites or liars. Or perhaps something far, far worse.

The above writer understood the danger of hate speech, the purpose of which is to encourage violence. We have little doubt that this writer might also agree with us the white supremacists who are among the primary audience for this kind of speech are more dangerous as a result. This writer wouldn't minimize the danger such groups represent to the public. 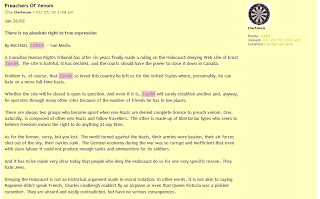 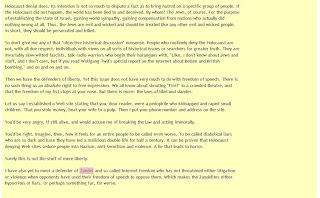 He is good people.
Posted by Kurt Phillips at 23:38

Systematic Holocaust denial is simply hate propaganda and yet another species of WILLFUL PROMOTION OF HATRED and should be prosecuted criminally as such, especially now that the civil remedies for many forms of hate expression are no longer applicable here in Canada.

There are 3 basic earmarkings that clearly differentiate hate expression from merely offensive speech or harsh opinion.

These are:
1) dehumanization
2) demonization
3) The inability of those targeted for abuse to be able to answer meaningfully in the same forum that the expression was issued.

White supremacists in the USA murder and attack innocent people of colour regularly. Just check the Southern Poverty Law Center website. These attacks are not linked to robbery or crime, but mainly for terror. Furthermore white supremacists are linked internationally just like al-queda.
This should qualify white supremacists as terrorists and should be dealt with in the USA under the Patriot Act.

*really* good video about white supremacy in the digital age

You can see his whole presentation as videotaped by the BCHA. If you’re a humanist in BC, consider lending your voice and support to this active and growing group, under the skilled leadership of Ian Bushfield.

(found the link and text on the blog crommuinst manifesto)