We noted in our last article that Jon Latvis spoke to a reporter from "The Sun" in an effort to extricate himself from the unpleasant notoriety as a result of Warren Kinsella's recent article.

Or, as Latvis himself puts it:

Latvis has taken a not so novel approach to dealing with his past.

He has decided to lie or, as a friend has put it to us:

By Alex Consiglio, QMI Agency
TORONTO — An alleged neo-Nazi musician who posed for a picture with Toronto Mayor Rob Ford says he wants his name cleared.

Jon Latvis was visiting Toronto from Latvia and posed for a picture with Ford in January at the New Year's Levee at city hall. He's wearing a uniform in the photograph.

Warren Kinsella, a blogger who often writes for the Toronto Sun, posted the picture to his blog last week and alleged Latvis is a neo-Nazi musician who played guitar for Rahowa, a white supremacist rock band.

"I'm not a racist, I'm not a neo-Nazi and I'm not an anti-Semite," Latvis said Tuesday from Latvia, adding he's no longer in the band.

Latvis said he only played with the band a few times in a studio, "not knowing what their politics were," after being asked for the favour in a bar.

Latvis said Kinsella's other claims that he wears a neo-Nazi uniform, swastika badge or that he has a swastika tattoo are also false.

Latvis added the uniform he's wearing in the picture is of the Latvian Homeguard, a volunteer group that makes citizen arrests in Latvia, and the symbol Kinsella refers to is a Cross of Thunder.

"It's basically the same symbol," as the swastika, "but it's not a swastika," said Latvis, noting the Cross of Thunder represents light and protection. "Hitler took this symbol and made it despicable."

Kinsella countered he's not worried about a lawsuit.

Kinsella said Rahowa was "the biggest neo-Nazi rock band in the world" in the 1990s.

He added the band was barred from Toronto back then, when skinheads were attending concerts and doing Nazi salutes in the front row.

"What did he think -- that they were waving at him?" said Kinsella, who insisted "he knew what he was up to."

"The gentleman identified himself using a name different from the one attributed to him in the recent blog article," said George Christopoulos, Ford's press secretary.

"At no time was the mayor aware of allegations that this individual had made racist, hateful or otherwise offensive comments."

Gee. He has threatened to sue Kinsella. Never saw that coming.

Latvis isn't going to sue, though we're sure it would be a fun show. But unfortunately for Latvis, everything Kinsella has written about Latvis is true.

Like those before him who believed they could lie about their past, Latvis left a significant electronic trail over the past decade.


Latvis said he only played with the band a few times in a studio, "not knowing what their politics were," after being asked for the favour in a bar.

Hey, Jon. Do you remember that you had a website? No? We shall remind you then: 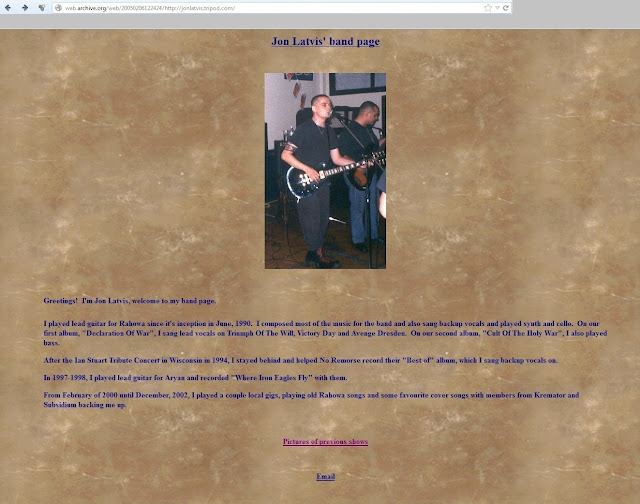 I played lead guitar for Rahowa since it's inception in June, 1990.  I composed most of the music for the band and also sang backup vocals and played synth and cello.  On our first album, "Declaration Of War", I sang lead vocals on Triumph Of The Will, Victory Day and Avenge Dresden.  On our second album, "Cult Of The Holy War", I also played bass.

After the Ian Stuart Tribute Concert in Wisconsin in 1994 [RAHOWA begins set at 9:35 after the other neo-Nazi bands, fyi], I stayed behind and helped No Remorse record their "Best of" album, which I sang backup vocals on.
"Triumph of the Will"
I can hear the rumble on the streets
I can see the look in our eyes
I’m more convinced with every person that I meet
We don’t believe the jewish lies

We’re marching, we’re gaining in our might
We’re standing up for our racial nation
Picking up the torch of ancestral fight
And the taste of victory fills us with elation

It was 1945, long time ago for you and I
When the bombers, they came from the sky
They burned men and women alive
300 000 Germans died
Oh tell me why, oh why, I must cry

Ref: Dresden must be avenged
Brethren, we must make amends
Until justice is served, we shall not die
I hear the voice of those Germans cry:
”Avenge the destruction of Dresden…”

A terrible holocaust - we must avenge at any cost
As creators we are angered at such a loss
David Irving’s waged a fight, because the truth is always right
Just hidden out of sight on this night 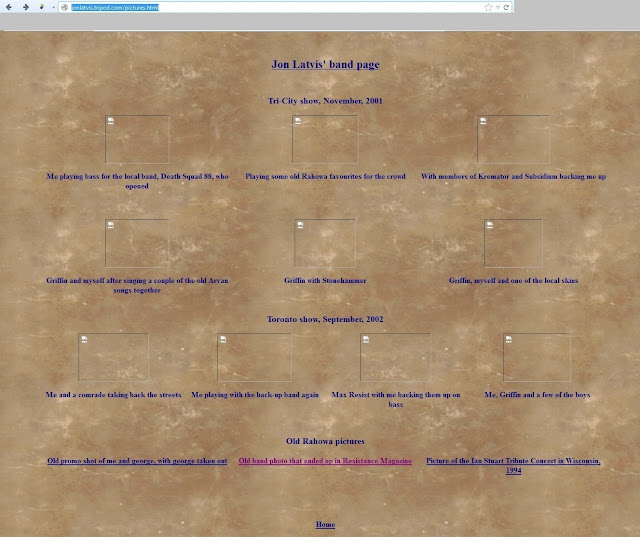 The n=man is hilariously stupid. A fine scion of the "master race." (*snicker*)

He also wrote a snappy little number for Prussian Blue. You remember them, the scary Blond pre-teens with Hitler happy face tshirts? http://www.discogs.com/artist/Jon+Latvis

OK further to all the inconsistencies Latvis is coming out with. Additionally I don't think his surname is very Latvian. Rather too "pat" like calling yourself Johnny English. Plus his first name isn't even vaguely Latvian.

Homeguard (Zemessargi), This does actually exist in modern times. Look here:-
http://www.zs.mil.lv/
as you can see from the pictures, these guys would not be about to make a "citizen's arrest" at any time. That's because they are real soldiers, unlike Latvis. They have done exercises with the Michigan National Guard, they ain't no Nazis these days (as much as this guy Latvis would like).

I presume he is glorifying the old version of the Zemessargi in 1940/941 or so, (AKA Latvian (SS) Legion),
http://en.wikipedia.org/wiki/Latvian_Legion
However, it has to be said that unfortunately the Eisatzgruppen A (who murdered most of the Jews in Latvia - 5% of the citizens or 90,000 or so people) composed the core of the subsequent Zemessargi at that time (AKA Latvian Legion). Plus, the "extra" Zemessargi people joining after the Einsatzgruppen ones were conscripts mostly, unlike the Einsatzgruppen guys, who trust me, were rather enthusiastic.

Perkonskrusts - sorry, but he's lying.
Pekonskrusts means "Thunder Cross".
This was a proto-Nazi student organisation in the 1930s which was so disgusting that it was banned by the rather authoritarian Latvian President of the time, Ullmanis, as being an undesirable organisation, and to protect the rights of minorities. Perkonskrusts was a recruiting ground for people (crazies) who wanted to join Einsatzgruppen and shoot Jews etc. They had offices in central Riga, they used to torture, humiliate and kill local Jews in the basement.
Crazies involved in this include Viktors Arajs and Herberts Cukurs, a pioneering airman who flipped between being Trotskyite and full-on Nazi.
Additionally, Einsatzgruppen men used to go murdering Jews in the neighboring countries as well... Belarus, Ukraine (Babi Yar).
Many foreign Jews were also brought from the west like, Germany, possibly France also, and killed in Latvia by or on behalf of the Germans.
The Germans had no intention of letting Latvia become a sovereign state again, they were simply interested in Lebensraum and slaves. They would have killed large proportion of the population, and nearly all in the Eastern part of Latvia (Latgale), and almost everyone in nearby Belarus and Ukraine, see the (secret) Generalplan Ost on WikiPedia.

And finally, the Nazi propagandists used to like to tell people they had to kill Jews because they were "all Bolsheviks" or traitors who casued the Germans to lose WWI (nothing to do with superior opposition, then!)
The Nazi that came up with that idea was http://en.wikipedia.org/wiki/Reinhard_Heydrich (assassinated by the Brits and Czechs!)
but most likely based on the ideas of this unsavory fellow:-
http://en.wikipedia.org/wiki/Alfred_Rosenberg
who was executed at Nuremberg.
Oh and Cukurs was hunted down and executed by Mossad in South America where he had fled to.
http://www.history.co.uk/shows/nazi-hunters/episode-guide.html

Additionally I forgot to include this for historical interest, apologies for wordy post. Else Hirsch was a German Jew who spent a lot of time saving Jews in Europe, and was transported to the Riga Ghetto in Latvia and killed.

And since he must be aware that Perkonskrusts was a banned proto-nazi organisation historically that the Nazis subsequently encouraged, he must also be aware that the name is also used as a euphemism for the swastika symbol itself.
Also, he doesn't look like a hippy-dippy Hindu or Buddhist with interests in Sanskrit? I mean those guys historically have brown skins, and otherwise aren't usually knuckle-draggers with tattoos and obvious David Irving fetishes and a penchant for buying second-hand SS uniforms out of Army Surplus :P