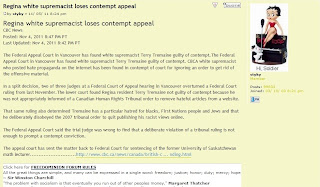 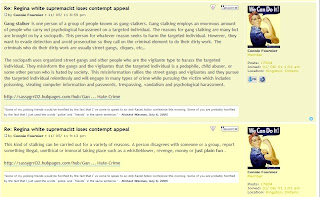 Connie was actually sort of challenged on this claim, to which she responds: 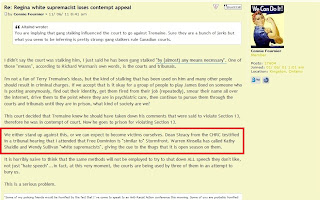 Well, while we can't say much about Ms. Sullivan, in the case of Kathy Shaidle, if the shoe fits... 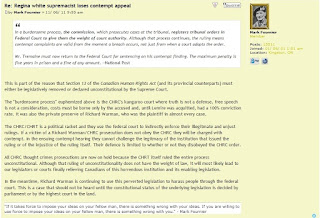 Actually, Lemire wasn't acquitted as he was found guilty of a single charge (a penalty wasn't imposed, however). But thus far we really aren't finding anything particularly new in Mark's and Connie's argument. In fact it's sort of the same hissyfit that they throw everything something doesn't go the way they wish it would.

But then we found ourselves quietly laughing to ourselves as it became clear that they are really not all that self-aware and might be, oh, we don't know... projecting just a little bit.

We are, of course, one of those sites (title of the article makes a little more sense now, eh?).

Sigh.... where to begin? You know, besides mentioning briefly that we have never posted a single picture of either Mark or Connie on this particular blog.

No Connie, as we stated before on this blog and will state once again, we do not think you or Mark hold the same views of Marc Lemire, Paul Fromm, Terry Tremaine, or any of the other racists you've found common cause with on the issue of Sec. 13.  (the same cannot be said of some of the membership of the Free Dominion, however). We would argue that both of you are wilfully blind to the realities of the people who's cause you've decided to champion though as you stubbornly refuse to acknowledge objective and overwhelming evidence that doesn't conform to what you have decided to believe about those individuals. On the other hand, you have been, and continue to be, credulous about every single rumor, innuendo, falsehood, and misrepresentation you have been told or which you have made up yourselves as applied to those who disagree with you. Case in point:

We would challenge Mark and Tammy to find a single example of a member of ARC who has been charged with a crime, much less convicted (traffic tickets excluded). They won't find any examples, because those examples don't exist. No member of ARC has been arrested for anything, and not because we haven't been caught doing something illegal. We haven't broken any laws. And yet, Mark and Connie still insist on, for lack of a better word, lying. And here they are again, making the same claims.

While it used to bother us to be so misrepresented, we're at the point where the claims of Mark and Connie have become so outlandish and cartoon villain-ish that it has really become laughable. Take the "puddles" incident. When we mentioned Mike Gaio's unwanted nickname, Mark immediately jumped to the conclusion that this was the serious crime of forcible confinement. The reality doesn't conform to this story as it was recounted us here and elsewhere. This incident also happened long before ARC came into existence and, while we're sure we have some of the details wrong, was not a case of forcible confinement. And yet, Mark still uses this as an example of how "dangerous" ARC Is.

Told you it was funny.

Such was not always the position held by some of their members though. In fact, one of their moderators once had a very different view about free speech:

"WestViking" here is referring to the decision to deport Ernst Zundel from Canada. Previously he posted part of the Blais decision (we agree) justifying the deportation, which includes his association with some very unsavoury characters:

If the print is too small, we took the liberty to break it down a bit for our readers:

"WestViking" further offers what can be considered to be some sound advice concerning whom one associates with: 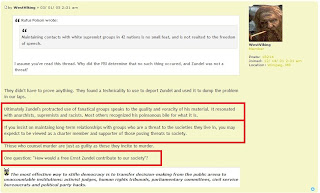 But this was all in 2005. How have his views on freedom of speech changed?

We're sure he'll sidestep this issue, if it is acknowledged at all.

We would leave our fans at Free Dominion with this to think about.

While we don't think that Sec. 13 will be struck down as unconstitutional, nor do we think that the current efforts by a Conservative backbencher to repeal Sec. 13 will ultimately be successful (and we recognize we may very well be wrong in both cases), we here at ARC wouldn't be that upset.

Since a lot of our work is done online, we can imagine a flood of information coming our way initially. Hell, we would have so much to do, we might not be able to keep up.

But as the boneheads become smug, they become careless. Ultimately, even if Sec. 13 were to be struck down, the Criminal Code is still in place.

Boneheads are upset about the CHRT? Wait until they are criminally prosecuted.

It might sort of be a case of, "be careful what you wish for."

By the way, the reason why we add tags isn't to link Free Dominion and the Fourniers to the often violent individuals we cover here. It is for ease of navigation through our articles.

Not that they'll accept this explanation, but it was worth a shot.

UPDATE 1: We confused "WestViking" for another of the moderators who is a woman. Made the necessary revisions.

Okay, not really. But they are talking about this post on Free Dominion. We won't get into the ridiculous claims Connie has been making on one of the threads, but this really wouldn't be a true representative of the mindset of Free Dominion is Kennedy didn't add his two cents: 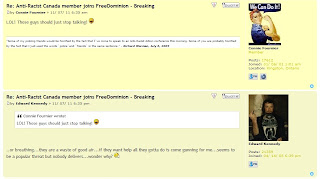 Gee Ed, we don't know. We suppose it could be (at least on our end) that we've never threatened you once despite your own repeated threats directed towards us? It could be that you're simply a little man who can talk big and tough online knowing full well that you will never need to back up that talk since you also know full well that those whom you've decided to target are not violent?

Or maybe you're simply a nutbar? 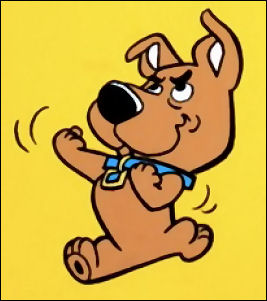 We're going to call you Scrappy. A little dog always spoiling for a fight, until he has to back it up.