Willis Is Not A Nazi: Part 1 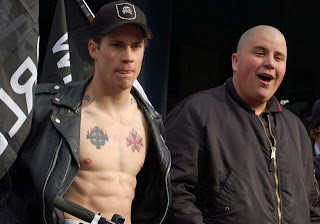 Remember Willis (the shirtless guy standing next to Aryan Guard member John Marleau at the "White Pride" march on March 21, 2008)? Well, it would appear that he is claiming that he is not a member of the Aryan Guard, not a Nazi and is considering suing the ARA for slander:

A man knocked unconscious by a local anti-racist group says he’s not a Nazi, and he might sue the group for slander.
Willis, who declined to give his last name, was targeted by Anti-Racist Action (ARA), which distributed pamphlets at Millennium skate park, claiming he was a recruiter for the Aryan Guard, a racist gang. Willis says he has never been a member of the Guard. When he confronted ARA about the pamphlet, a fight ensued, and he was knocked out.
While Willis says he was a neo-Nazi six years ago and is “proud to be white,” he says he is against racism, segregation and Nazism. He says his only connection to the Aryan Guard is that a friend happens to be a member of the group, and also that he attended a white-pride rally in March of this year.
He’s considering suing ARA for slandering him in its pamphlets. A lawsuit would be difficult, he says, since ARA is not a registered organization and all but one of its members have kept their identities secret.
Stormfront member "Temperalles" continues to lay it on thick:

He's not a member of the Aryan Guard. The kids he was 'recruiting' weren't for the Aryan Guard, either - kind of obvious, considering some were non-White. What he was 'recruiting' for was social responsibility, encouraging these kids to avoid drugs and drug-dealers and other such criminal elements. As many ARA types are also druggies, this could give us a clue as to why they went out of their way to physically assault and defame him. They even claimed he was trying to ply kids with bribes of cigarettes - I've seen for myself that he discourages them from smoking.

"Social responsibility, encouraging kids to avoid drugs and drug dealers and other such criminal elements." Does he walk old women across the street too?

But you know something? Maybe they're right. Maybe Willis is telling the truth. Maybe he is against racism? Maybe he isn't a Nazi? Maybe he's been unfairly maligned? We mean, what evidence is there that Willis has any neo-Nazi sympathies at all?

Well, we guess there is this photo: 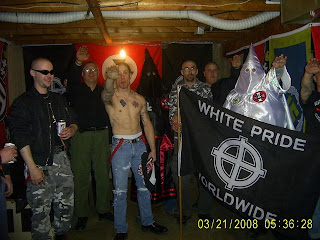 So, we have Willis at the home of an Aryan Guard member standing with three Klan members (two of whom are in full klown costume) two members of the Aryan Guard (Robert Reitmeier and John Marleau) and Terry Tremaine who is the leader of the National-Socialist Party of Canada (that's a Nazi party, for those not in the know). Behind them all draped on the walls are neo-Nazi, Nazi, and "White Pride" flags. And, to top it off, Willis and friends are giving the Sieg Heil, a salute usually identified historically with the Third Reich and contemporary neo-Nazis.

We can't imagine why anyone would think Willis had neo-Nazi sympathies based upon this?
Posted by Nosferatu200 at 16:24

Out of curiosity, when was the photo with the KKKlown suits and Sieg Heil taken? Is it recent? If so, that blows his claims that he's not a Nazi anymore right out of the water. If it's old, he'll be the first person I call the next time my kitten is stuck in a tree.

My kitten is a tabby, though, and has very little white on him. Do you think that would stop dear, sweet, kindhearted Willis from rescuing my non-white cat and providing him with valuable lessons how to avoid catnip and "other criminal elements"? I sure hope so.

The photograph was taken March 21, 2008. This was the same day that the Aryan Guard, the Saskatchewan Klan members, and Terry Tremaine held their "White Pride" march. So the photo is only 5 months old.