A bit of a backgrounder. Before his neo-conservative rag of a magazine, "The Western Standard" collapsed in it's actual magazine form (there's still an online blog version available) Levant, perhaps in an effort to increase circulation to save his baby, included the cartoons of the Muslim prophet Mohammed that were originally printed in a Danish newspaper and which resulted in a bit of a "kerfuffle." It didn't save his magazine, but it did result in a human rights complaint by two Islamic organizations accusing Levant of promoting hatred towards Muslims. Thus Levant, who had earlier called on a provincial human rights commission to go after an the head of another Islamic organization for promoting hatred towards Jews (hypocrisy much?), has styled himself as a defender of freedom of speech and has not been sparing in his praise of neo-Nazi associates Paul Fromm and Marc Lemire, while demonizing Richard Warman and Bernie Farber.

Now, why were we laughing?

Levant has a number of advertisers who help to support his blog. Whenever you click on one of his entries, a random advertisement appears beside the blog entry. Now, we're not sure if Levant has a choice on what advertisers sponsor his blog, but when we saw this, we had to laugh. Let's see if our readers can guess why? 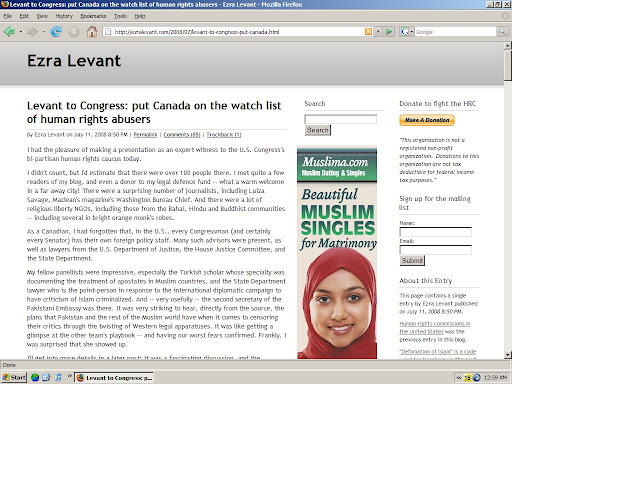 So either this is incredibly ironic given Levant's statements regarding Islam, or Levant has a huge set of balls.
Posted by Nosferatu200 at 11:28