This article is cross-posted with Anti-Racist Sudbury, and can be found on here.

ARC has wanted to cover the extensive harassment being suffered by Fierte Sudbury Pride for some time and as our friends at Anti-Racist Sudbury have been writing about this extensively, we felt sharing their work was the right way to do so.

There are a number of previous articles detailing the events and actors involved in the harassment on Anti-Racist Sudbury, which can be found here:
Please follow them on Twitter. They do fantastic work.

ARC wishes to express solidarity with both Anti-Racist Sudbury, and Fierte Sudbury Pride.

To adequately explain how this all began, we need to back up to Dec. 22nd, 2018 and the second Yellow Vests rally that occurred here in Sudbury. In attendance were members of Canadian Combat Coalition (C3), Yellow Vests and Soldiers of Odin (SOO). 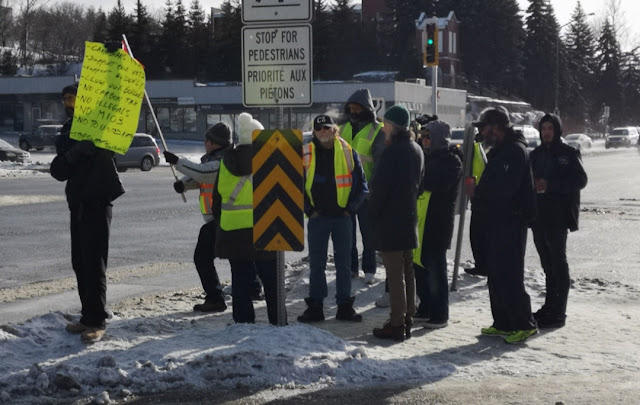 At the rally, there were members of the LGBT community present amongst the counterprotestors and and chants such as: “RACIST, SEXIST, ANTI-GAY. ALL YOU YELLOW VESTS GO AWAY.” The Yellow Vests were especially confrontational about being called “anti-gay,” but didn’t seem nearly as bothered by being called racist and sexist.

At this point, there were in fact several women amongst the Yellow Vests who identified as members of the LGBT community, but these were not the individuals who became hostile and aggressive in response to being called “anti-gay”. All have since left the movement and have not appeared on our radar for quite some time. Good for them.

We bring up this rally because an individual who would later be targeted was there and we believe it is very likely that the far-right began targeting them this early.

People associated with Pride then came to be specifically targeted several months later by the far-right after individuals associated with it protested the showing of an anti-abortion propaganda film called “Unplanned” on July 13th, 2019. 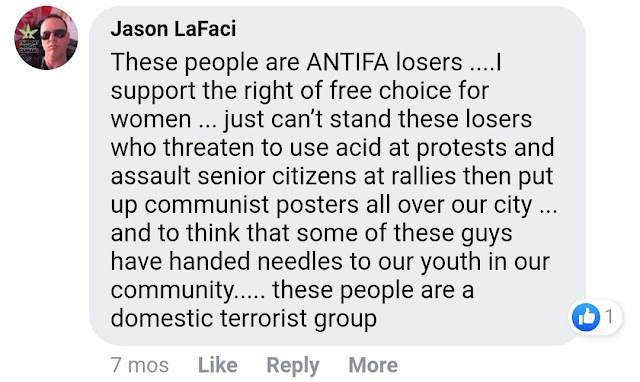 The next big development occured on  September 21st, 2019, when a large group of counter-protestors assembled at Tom Davies Square in response to a planned Yellow Vests rally. As is common, the Yellow Vests did not show up. Again, they became especially enraged at being opposed by members of minority groups and by now, they didn’t have much of an excuse, because their movement consisted solely of straight, white males.

Sheila has a longstanding personal grudge with the current board members of Pride that stems from her being asked to leave an AGM meeting in 2016 where she was disruptive and transphobic. Sheila makes a number of claims about Pride that appeal to the far-right such as: Saying the current board members are not really from Sudbury, saying that these same Pride board members are radical leftist infiltrators who took over the organization and saying that these same individuals have abused and harassed her for the past four years.

Following the publication of that “dox” there were cases of workplace harassment, street harassment, online harassment and, in once case, an explicit threat of sexual assault.

A major theme in all of this is the far-right’s anger at being opposed by members of a minority group and their need to rationalize this by coming up with reasons why they are not the “real queers”.

We have repeatedly stated that we are run by only two people, that both of us are straight and cisgender, and that no one from Pride have ever contributed to our blog or social media. The far-right simply refuse to believe this; which does not surprise us in the least. The truth is far more embarassing for them than the narrative they have spun and is in major conflict with their conspiratorial worldview.

The idea of us being a blog run by two individuals at a cost of approximately $15/month is not one they will ever easily accept. 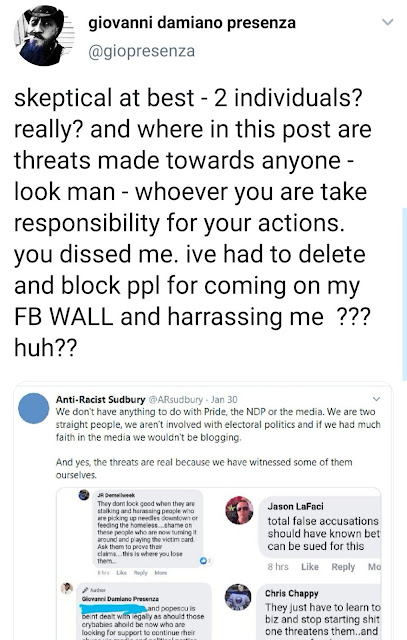 In the past year, the far-right have identified at least thirty people that they think are involved with us. All of these identifications have been wrong. On many occasions, the people they’ve accused have been cisgender and straight. But for *cough* some reason they never focus on these individuals for very long and they’ve usually just moved on without incident after a short period of time.

For their part, Greater Sudbury Police Service have not responded well. They released a statement saying that the threshold for prosecuting online and in-person comments is very high, essentially telling the harassers that their behaviour has not been criminal and they are free to continue. They released this statement during an ongoing situation that they are supposed to be investigating. We see no other reason for this other than their fragile egos and them being unable to handle any criticism.

It would have been much better if GSPS had made no statement at all.

The other big theme in this – besides the far-right’s rage at being opposed by members of minority groups – is that by conflating the LGBT community with Antifa, the far-right have given themselves a pretext to attack members of a group that are legally protected.

A screenshot of an "interview" between Jason Lafauci and JR Demellweek that lasts well over 70 minutes, and repeats more of the same untruths and conjured up narrative

Moreover, if we follow the far-right’s own logic of “LGBT and Antifa are the same thing” then they have clearly endorsed and promoted violence against the LGBT community in the recent past. 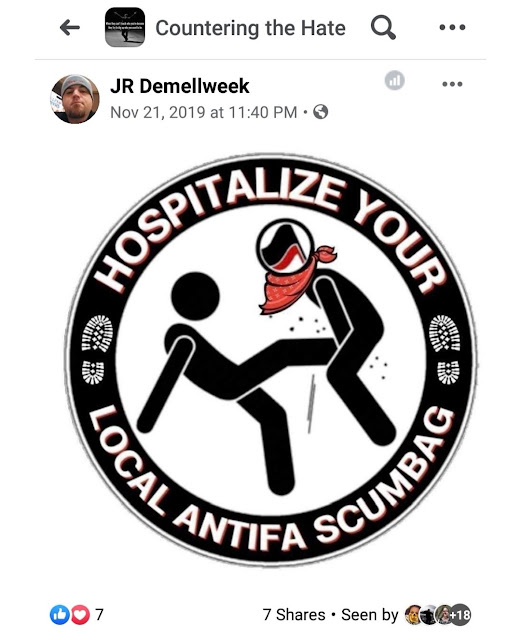 The big questions are: To what extent are the far-right going to be permitted to attack marginalized people’s using this thin pretext, is there a political will to stop it and are our existing laws protecting vulnerable groups adequate enough to address this?