I decided to follow up the article I posted yesterday concerning the Canadian far-right's celebration of Trump's overtly racist Tweet attacking four Congresswomen of colour (followed by a rally in North Carolina where he reveled in the crowd chanting "send them home!" before lying and claiming he didn't like it and tried to stop it despite video evidence showing the opposite) with a little more Canadian content on the subject.


NOTE 1: Wait just a little while, and Trump can be relied on to be completely unreliable as he reverses his reversal and defends the racist chant now. 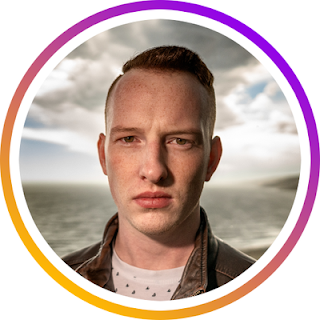 Once again, meet one of Rebel Media's latest propagandist personalities Keean Bexte. Before I get into the meat of the issue, let's address the elephant in the room. 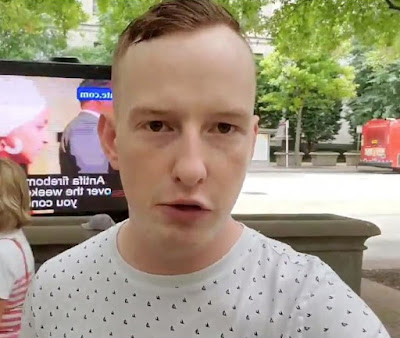 Your mother let you out of the house looking like that, did she? I mean, mine loves me enough to tell me that if I sported that haircut like that I should probably just shave it all off because I would look absolutely ridiculous.

And do you actually own another t-shirt? I legit looked at a number of photos of you and this one was rather ubiquitous: 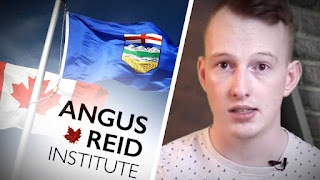 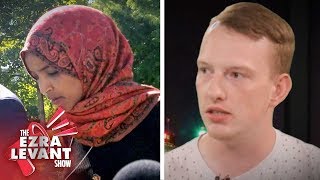 Is it your dress t-shirt? You're "report'n" t-shirt? Did you loose a bet that requires you to wear it continuously for a year? Do you think that t-shirt is the source of your strength like Sampson's hair (sorry, I know that hair is sort of a touchy subject). Do you wear the t-shirt to prevent nipple chafing? Does it promote nipple chafing (I won't judge your kink, man)?

THESE are the questions the people really want answers to Crutchie!

If you know Bexte, you do so likely for one or more of a number of reasons. He was a member of the Calgary Wildrose executive who was involved in some Roger Stone-esque dirty trickery in his effort to support Jason Kenney's campaign for leadership of the United Conservative Party. He managed to get a resolution at the Conservative policy convention eliminating birthright citizenship in Canada to pass before leaving the party in a huff because he didn't get his way over dairy products. He is suspected to have been one (if not the one) to have promoted a men's rights "documentary" by claiming that everyone knows that "feminism is cancer" and then create another online persona to take the blame for the email.

Those who read this blog are also aware of his links to Fireforce Ventures (an online store exposed by Ricochet which glorified the racist regime of the former Rhodesia and made liberal use of racist epithets) as well as a number of individuals associated with both Alberta conservative campus politics and the hate group ID Canada (formerly Generation Identity Canada): 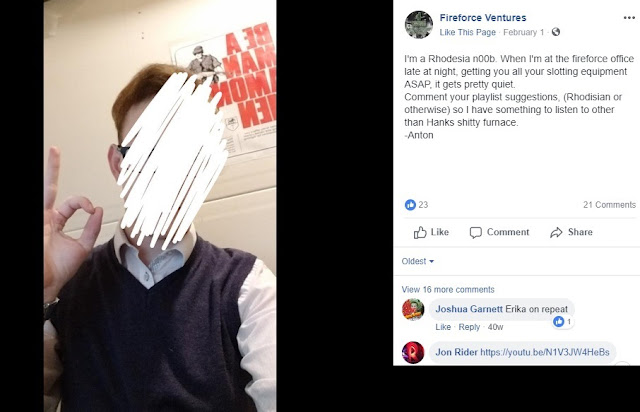 With a pedigree like that, it was only a matter of time before Ezra Levant, who has jumped started the careers of alt-right and alt-light figures such as white nationalist Faith Goldy, propagandist Lauren Southern, hate group founder Gavin McInnes, career criminal Stephen Yaxley-Lennon, former British Nationalist Party's Jack Buckby, serial liar Jack Posobiec, and Laura "My Life Is Meaningless Without Twitter" Loomer amongst others:
As a Rebel Media personality, Keean has recently been tasked with covering American politics by which I mean harassing Democratic politicians. Here for example is his hard hitting report (ie badgering) of Congresswoman Ilhan Omar which also appeared on another virulently Islamophobic website late last month: 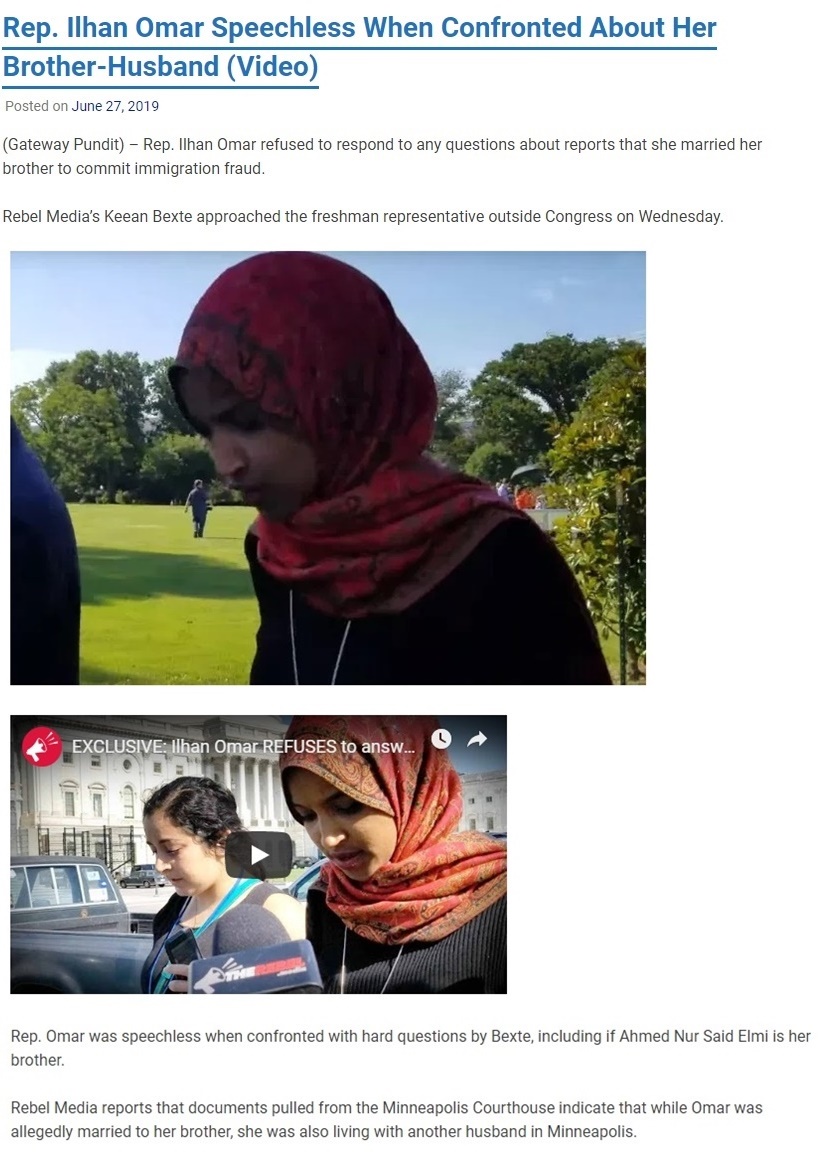 The whole "Omar married her brother to commit immigration fraud" slander seems to have begun in 2016 though it was quickly and definitively debunked:

That of course hasn't stopped the likes of Bexte and others from continuing to promote this slander (one can see it continually being referred to in screen shots posted in the article yesterday) as evidenced by the past several days: 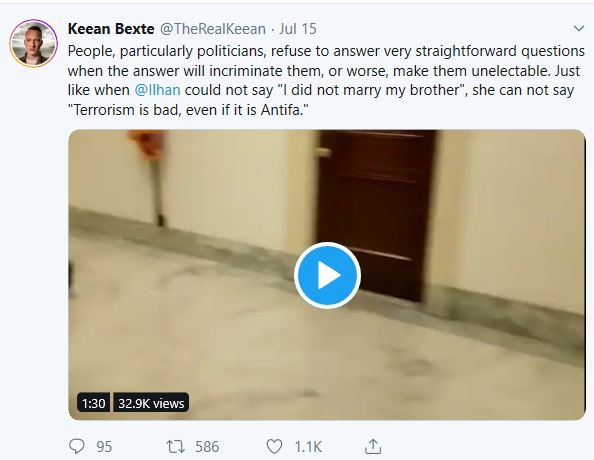 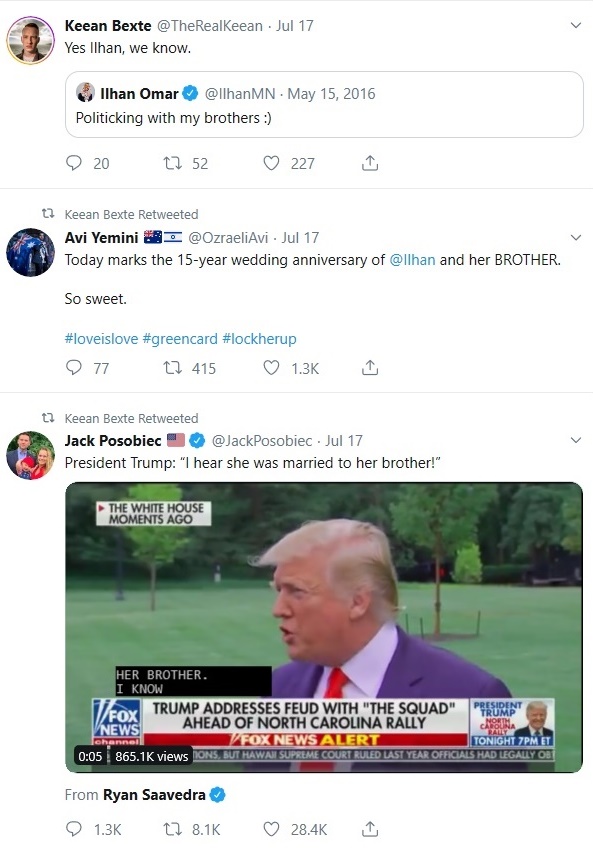 I can't stress enough how much this Ilhan Omar smear — now on Fox and talk radio, and coming from the president himself — is based on absolute nonsense. It's Pizzagate-levels of delusion. https://t.co/YGabsKxL82
— Will Sommer (@willsommer) July 19, 2019

In the world of racist misogynists like Bexte, a woman (and in this case a woman of color) refuses to talk to or acknowledge him is all that is the real crime.

In fact this really brings me to the main point of the article here. As Canadian Trump supporters, members of Rebel Media have been acting as one of this country's primary propaganda avenues. Bexte himself is a fan of Trump and after the current occupant of the Oval Office posted his racist tweet Bexte decided to jump on the train: 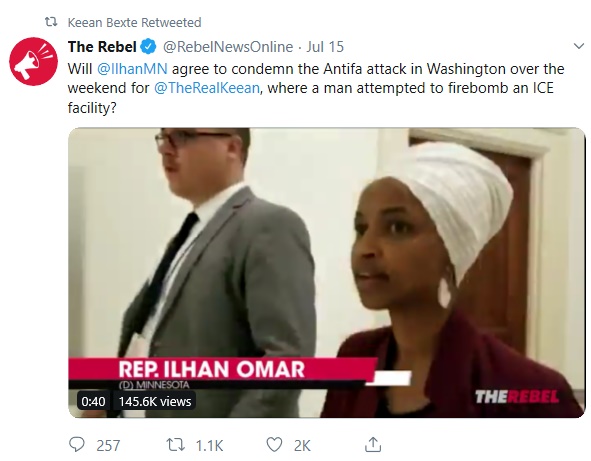 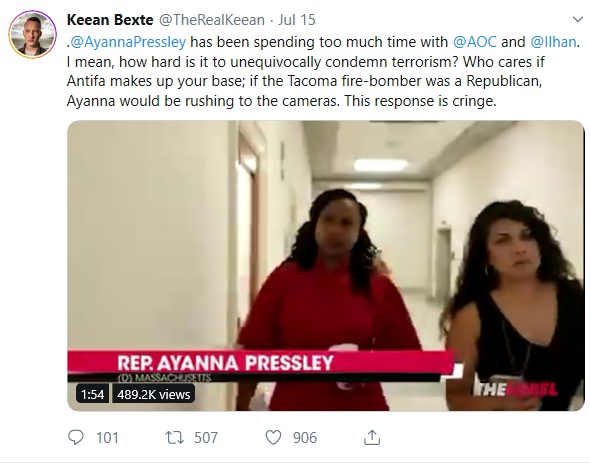 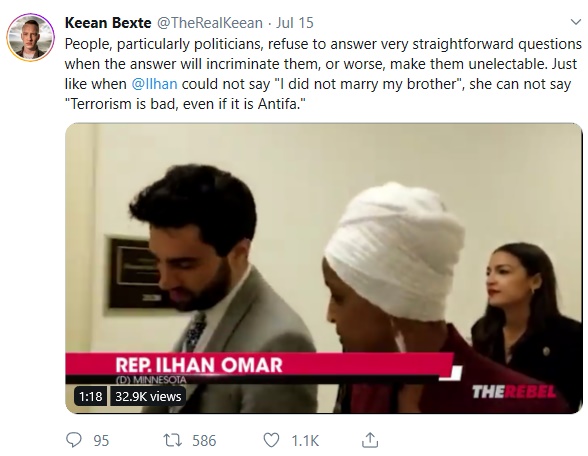 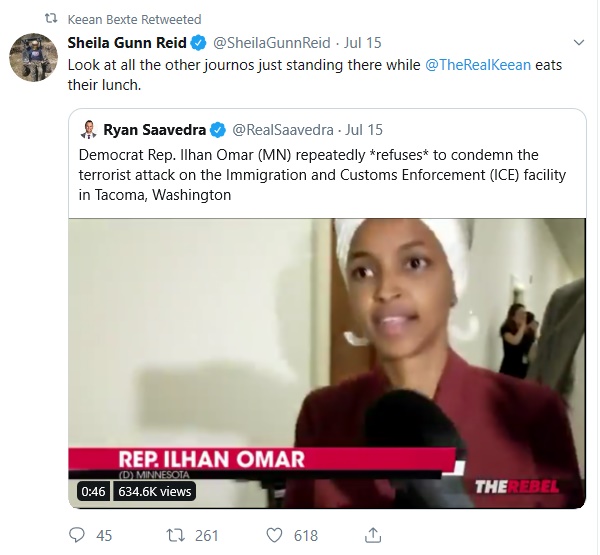 The question he continues to ask in the video is of the "have you stopped beating your wife?" variety.  Bexte, a person for whom acting in bad faith seems as natural as breathing, isn't at all interested in an answer. He wants a reaction as evidenced by this exchange with journalist Emily Leeham whom he berated along men who had accompanied him at a Linda Sarsour speaking engagement in Winnipeg. The telling moment occurs at about the 1:00 mark:

Keean Bexte from the Rebel Media other local men cornering me while asking inflammatory questions to get an emotional response. This is how the Rebel Media works. Video taken April 26, 2019 outside the Ukrainian Labour Temple in Winnipeg. Please share. pic.twitter.com/zvm6PDpk1M
— Emily Leedham (@Emily_Leedham_) April 28, 2019

Like Ms. Leeham, the four Congresswomen dealt with Bexte in the best way possible (and really, he should be used to women ignoring him by this point in his life). He's also disingenuous as hell since he himself makes it clear he's prefectly fine with violence and threats of violence as illustrated here when he defends border agents who posted rape and murder fantasies about Representative Alexandria Ocasio-Cortez on social media: 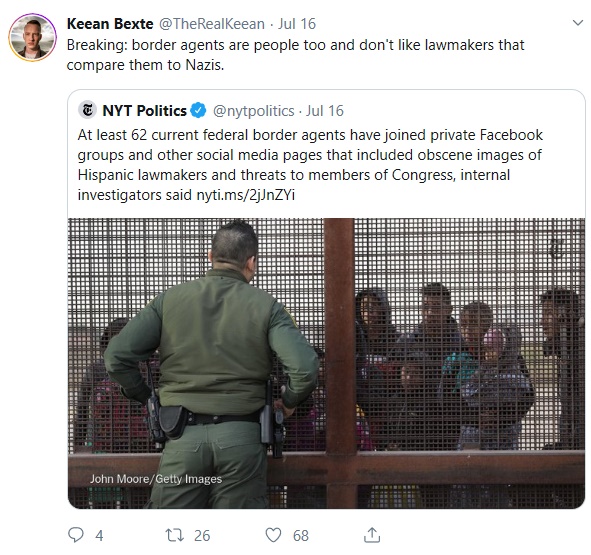 Bexte after all really isn't a journalist: 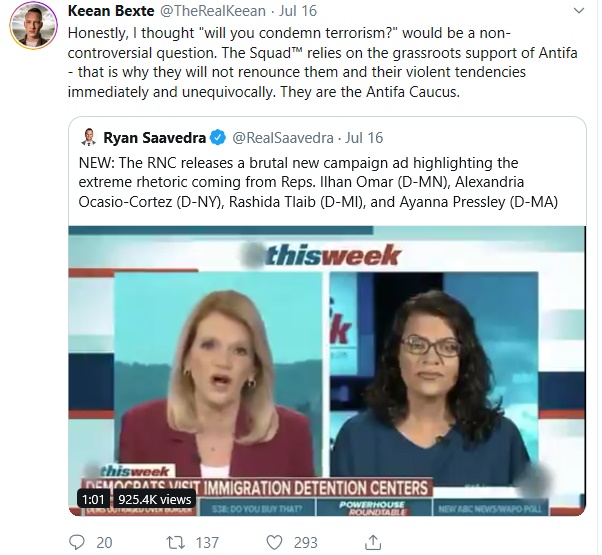 He's an agenda-driven propagandist who already has a narrative that he's going to push: 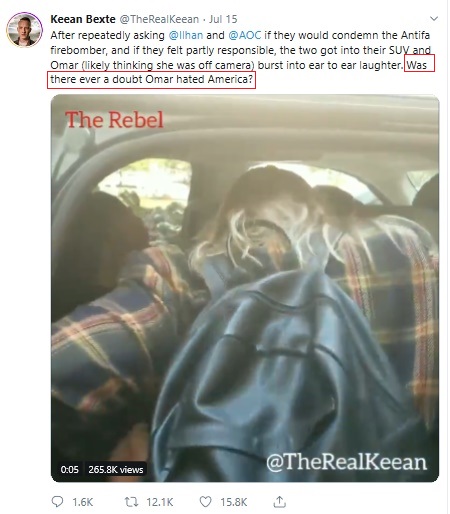 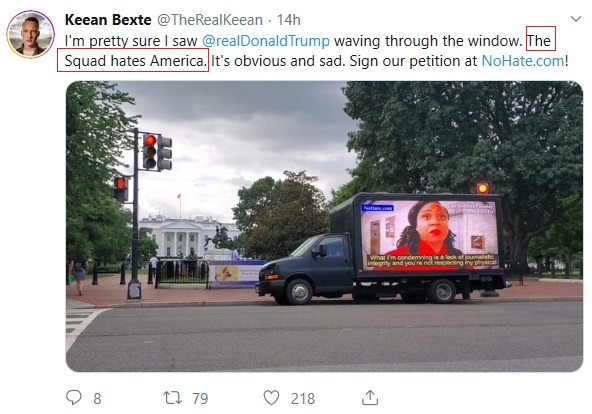 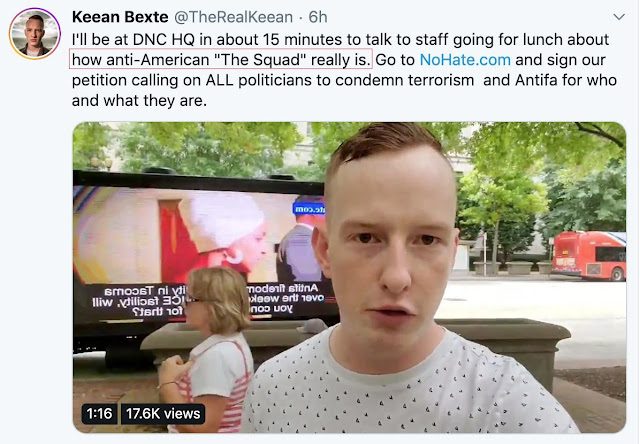 Now because Rebel Media is, in this writers ever so humble opinion, less a journalist endevor than it is primarily a business profiting from the anger and hate it stokes, Bexte and Ezra Levant (if not Levant personally than as part of Rebel Media's business model) have as they do bought a domain name and created a petition where the supporters can (a) impotently sign to voice their anger based on half truths and lies which won't actually accomplish anything but will make the signer feel as if he or she is doing something concrete and (b) provide Rebel Media marketers with personal information and email address that can be used to contact the signers and solicit donations.... allegedly. And of course there also has to be some sort of public stunt involved too: 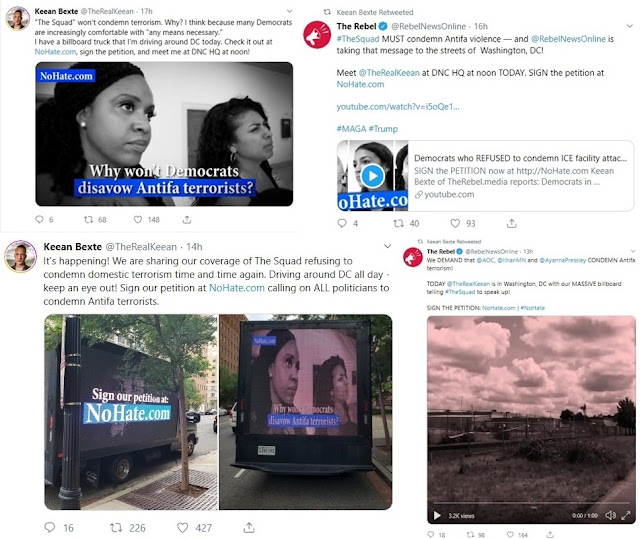 He also received a visit from former (if short-live in his tenure) Rebel alum Jack Posobiec: 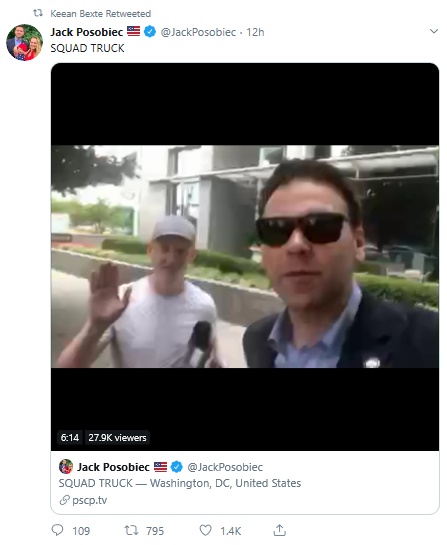 It should be noted that Posobiec is a nutbar who:
He was also fired by Levant because he was too dishonest even for Rebel Media.

Let that fact sink in there.

The campaign Bexte is engaged on is patently dishonest, but it does conform with the current toxic political environment on the right and as such will get an audience in those circles: 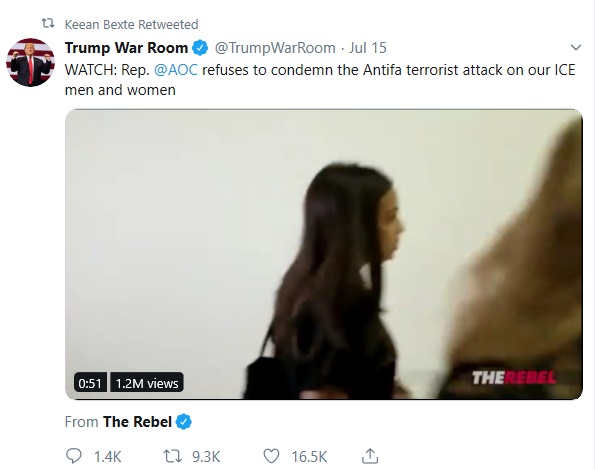 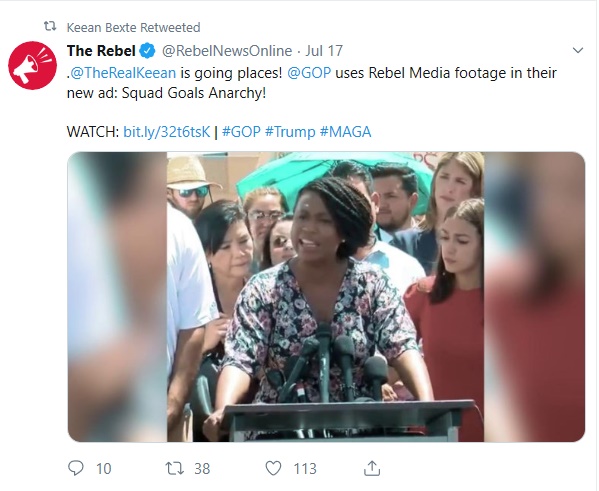 When should we start taking bets on when Bexte starts going down the same path as Goldy? 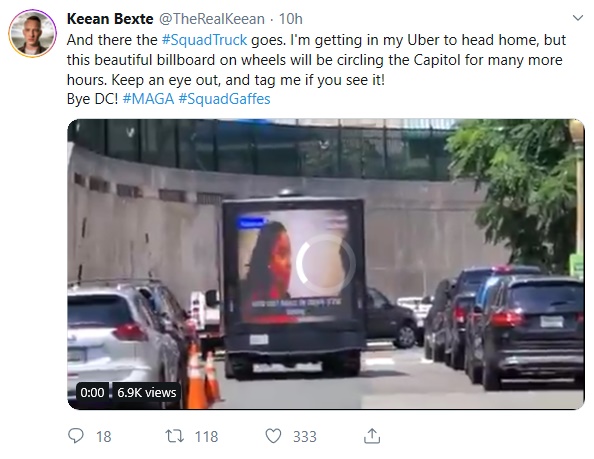