In 1947, a short film was produced by the American War Department warning Americans to be wary of racist demagogues and the dangers they pose to democratic institution:

The film was produced in response to horrors of a global war still fresh in the memories of the American public in which a man who had been a failure through most of his life but who had a gift for public speaking and manipulating public was able to achieve power in part by dividing citizens of his adopted country into Aryan übermensch and untermensch who's citizenship and humanity were stripped from them.

Now 71 years later, another demagogue is using (not reading because he proudly doesn't read) the same playbook:

In some ways this isn't a surprise. American politicians have for years used racist dog whistles to rile up their supporters, the Southern Strategy and Ronald Reagan's reference to "welfare queens" being two cases. And Donald Trump has a long history of racial animus; the refusal to rent to African-American tenants in the 1970s for which he and his father, the Central Park jogger case, his claims in 1989 that African-Americans had an advantage over whites, a 1991 book quoting him as suggesting Black Americans were lazy and that the only people he wanted counting his money were Jews whick also plays on stereotypes, his attacks on Native Americans during an effort to prevent tribal competition with him in the gambling industry, his birther attacks on President Obama, his claim that a judge couldn't be objective in a case he was being sued in because of his Mexican-American heritage, his efforts to stop Muslims from entering the United States and the lie that Arab-Americans were seen celebrating the 9/11 attacks, and so many more.

This was a man who, immediately upon entering the presidential race in 2015, labeled Mexican migrants as rapists and criminals, though he did allow that there MIGHT be some good people.

The racial animus is what in part attracted the bulk of Trump's supporters. When it was reported that he didn't want immigrants from "shit hole countries" his supporters began parroting that line while at the same time denying that he said it. So it can't be at all surprising when these same supporters embrace the overtly racist "go back where they came from" line while denying that it is racist but also assuming that the four congresswomen are foreign and Muslim (two of the four are) because of the colour of their skin.

The Canadian far-right who admire Trump have embraced this same xenophobic and exclusionary rhetoric: 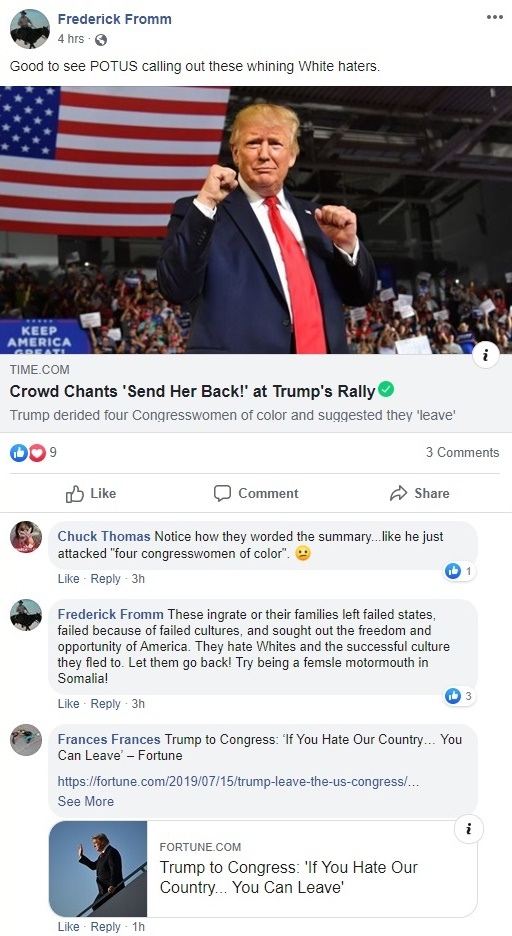 Kevin "The Poodle" Johnston, fresh off being on the receiving end of a multi-million dollar defamation judgement for his attacks on a Muslim-Canadian businessman for which he is unrepentant and doubling down, and long time white supremacist (and promoter of the recently outlawed Blood & Honour/C18 terrorist group) Paul Fromm aren't the only two examples of course: 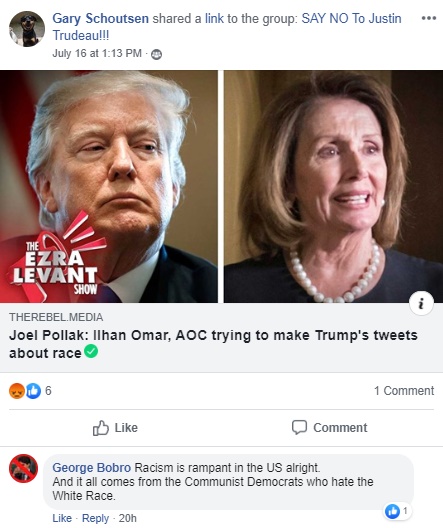 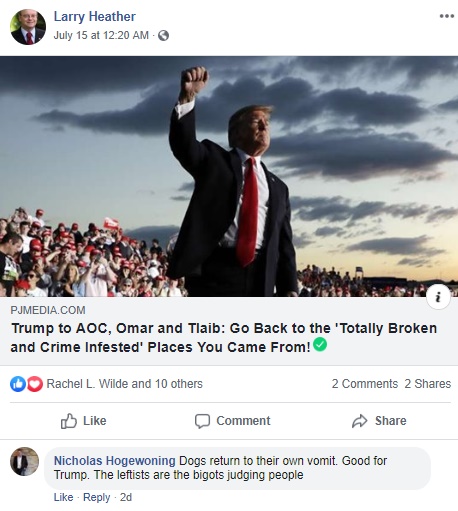 Similar posts can be found on the Yellow Vests Canada, Northern Guard, and a host of other far-right Facebook groups. Some of the most vile of the rhetoric can be found on the profile of Georges Hallak, a Quebec racist, Islamophobic, theocrat who ARC has discussed in detail and in passing in past articles: 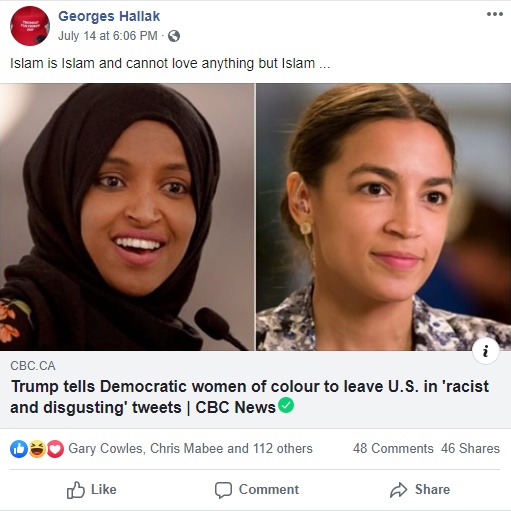 Hallak is a huge fan of Trump and of course embraces the same xenophobia about immigrants and refugees despite himself being an immigrant from Lebanon:

The response to this post might be the most telling regarding the character of the far right: 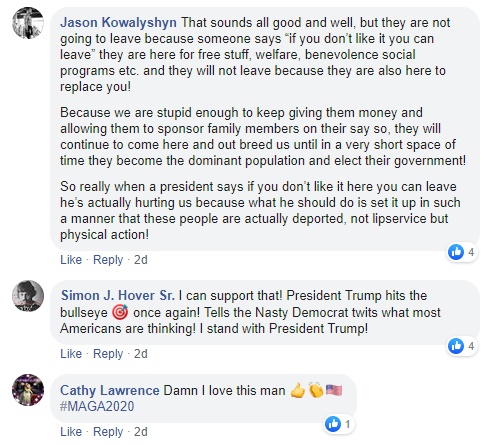 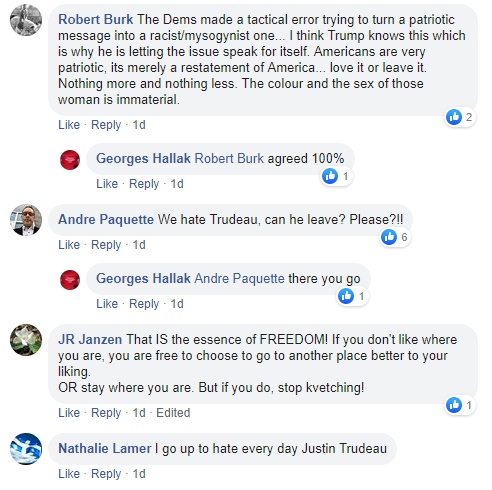 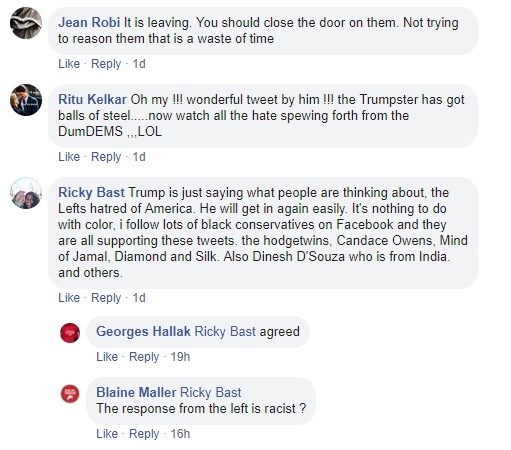 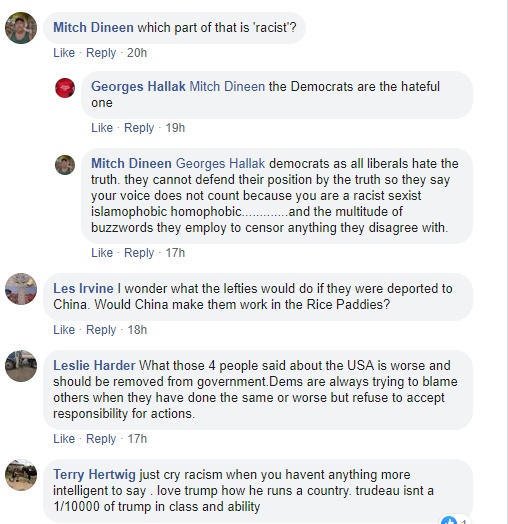 It is hard to get through to people who believe that Donald Trump has class, but I do digress.

The term "stochastic terrorism" has been used to describe Trump's tweet and other similar examples targeting political opponents, critics, and those he feels are not sufficiently loyal to himself. Stochastic terrorism has been defines as, "the public demonization of a person or group resulting in the incitement of a violent act, which is statistically probable but whose specifics cannot be predicted."

Given the reaction of the far-right in the United States, Canada, and elsewhere, it seems to be an apt term: 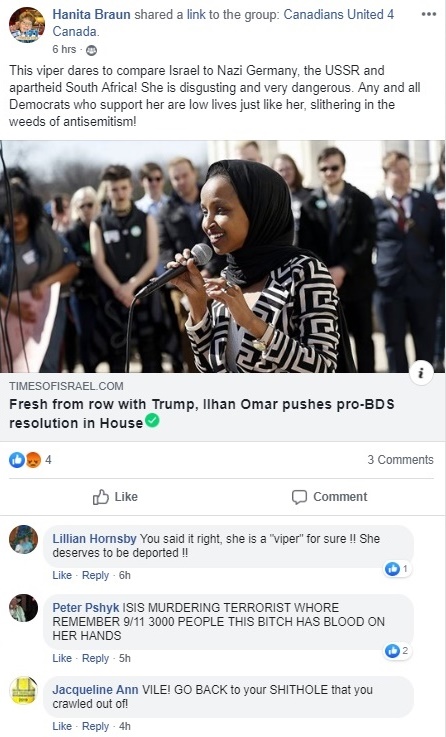 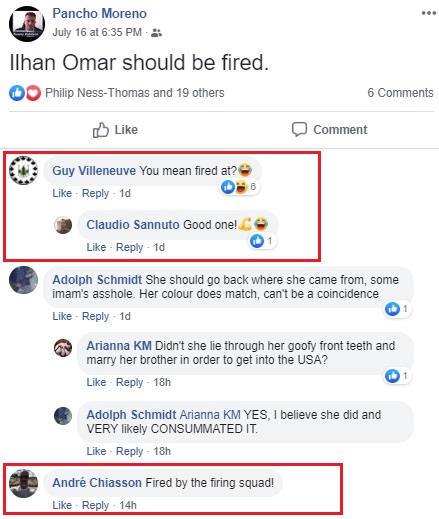 Hallak and his friends also gets in on the dehumanizing and dangerous rhetoric.... 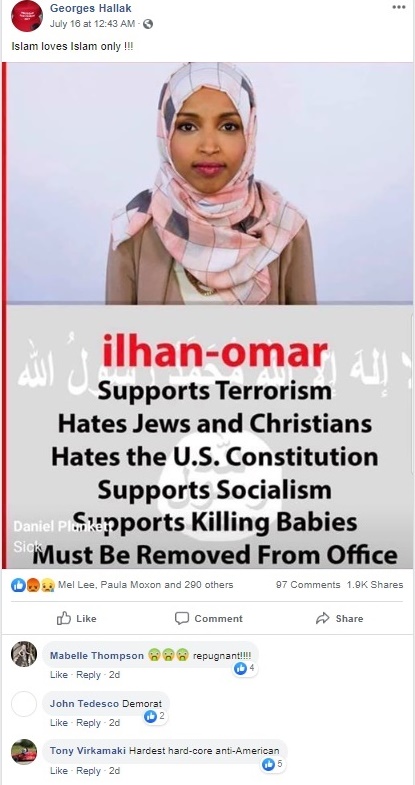 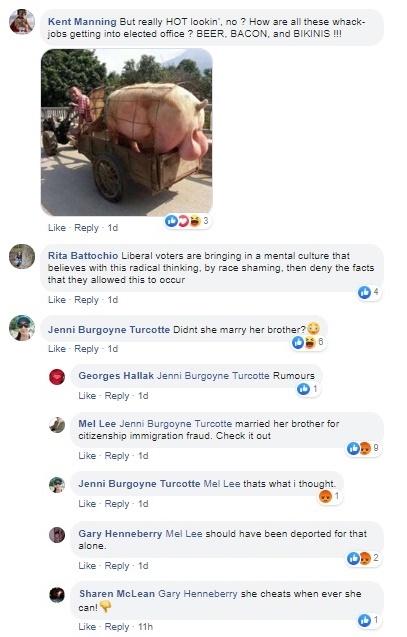 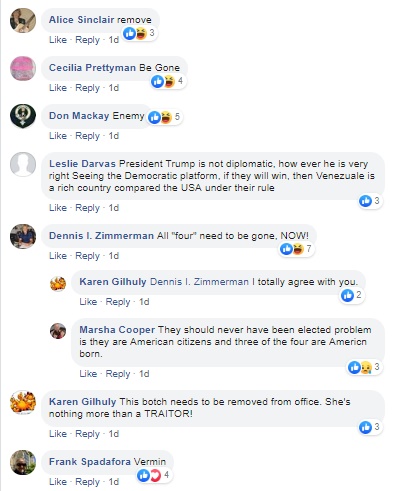 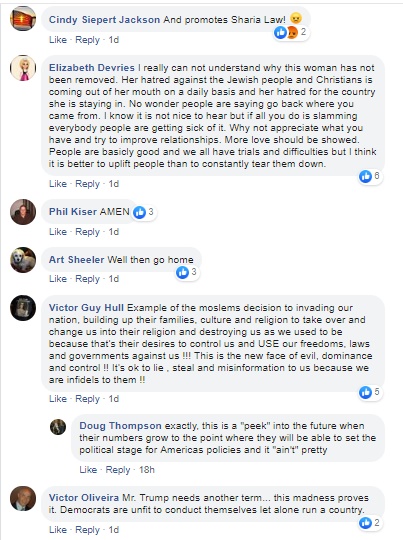 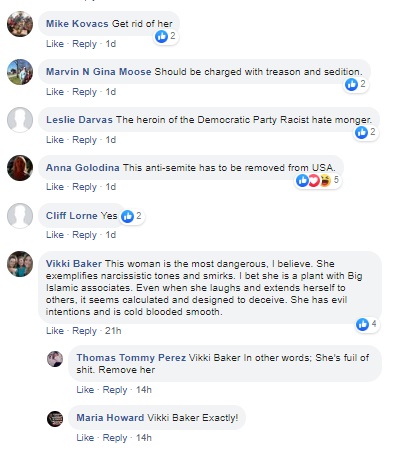 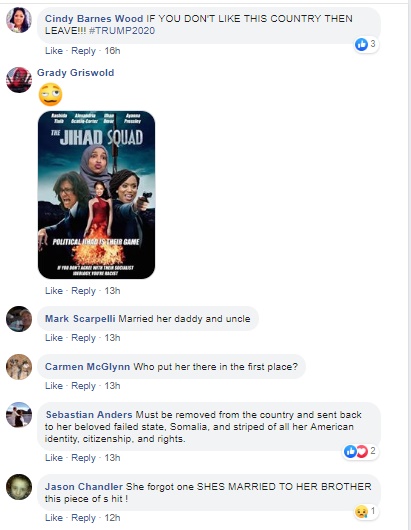 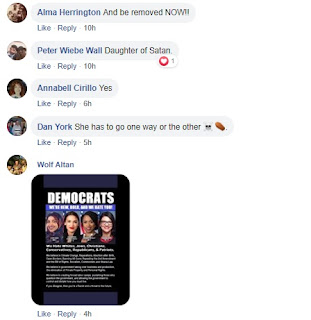 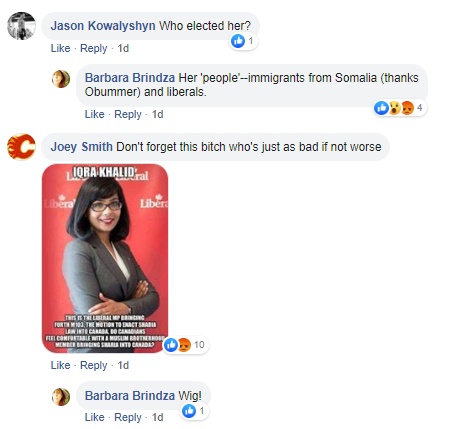 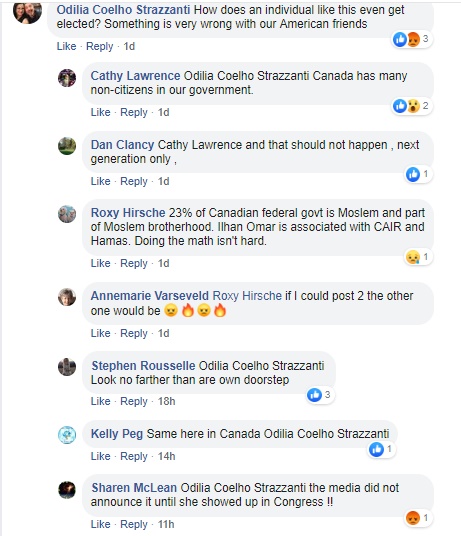 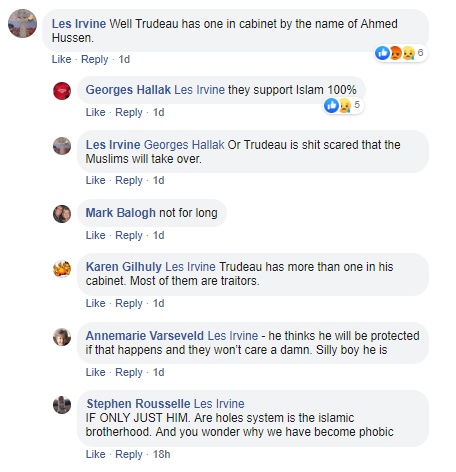 The "non-citizens" in the Canadian government are naturalized citizens who aren't white, thus are not and never will be truly "Canadian" in the minds of these posters.

And if Trump's xenophobia is criticized by the Canadian prime minister, the "patriots" on the III% Alberta militia page have an answer.

Threaten to break away from the country and kill the prime minister in support of the racist foreign leader:

Of course, we know that if Trump's tweets do have their (I presume) desired effects....

This is one of the single most racist moments in modern American political history. As Trump began attacking my friend Congresswoman Ilhan Omar, the crowd began chanting “SEND HER BACK, SEND HER BACK.” It’s utterly despicable and dangerous. We are here. We are in THAT time. UGLY. pic.twitter.com/6M0PBXe4Lr
— Shaun King (@shaunking) July 17, 2019

People will be assaulted, attacked, perhaps even killed as a result of Trump's racist incitement. Hate crimes have increased. A terrorist killed 11 in a synagogue as revenge against "invaders." When will your rage be exhausted? How many of us must suffer for you to feel great?
— Wajahat Ali (@WajahatAli) July 18, 2019

People are saying Trump’s rhetoric will “get someone killed” like the President’s rhetoric hasn’t already got people murdered.
— Solomon (@Solomon_Selby) July 18, 2019


....we already know the same people profiled in this article will claim it as a false flag.
Posted by Nosferatu200 at 13:36