While the reactionary Yellow Vest protests in Canada were mostly failure outside Alberta, I wasn't surprised when I learned that Faith Goldy showed up to the poorly-attended event in Toronto. There Goldy, newly married and being accompanied by a small group of desperate young men who are not her husband but who still think they have a chance if only they debase themselves even further, were outnumbered by antifascists in Nathan Phillips Square. 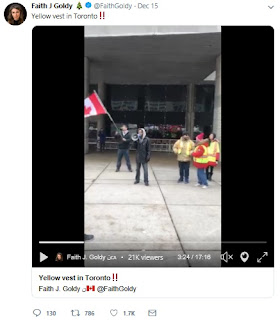 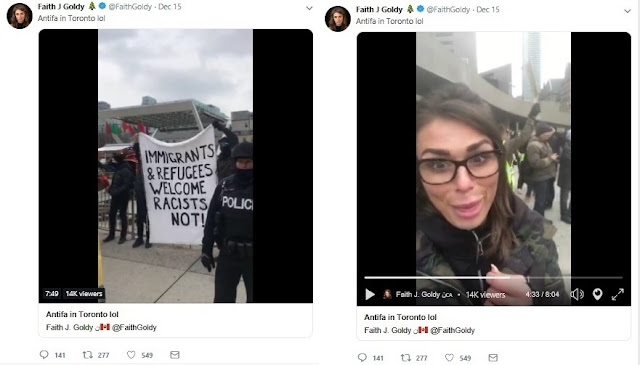 However while Goldy continued to humiliate herself in public for fun and profit, a bit of a hammer was about to come down:

Judge orders Faith Goldy, a self-proclaimed "propaganda arm" for the alt-right, a neo-Nazi mvmt, to pay over $43,000 to Bell Media in costs for her failed lawsuit to try to force Bell to air her ads. #TOpoli https://t.co/yX0kQscxO4
— Canadian Anti-Hate Network (@antihateca) December 16, 2018

Bell decided to pull her ads after a telephone and email campaign we started. She also claims to have spent about $50,000 in legal fees, bringing the amount of money she wasted to $93,000. Thank you to our supporters who made this happen.
— Canadian Anti-Hate Network (@antihateca) December 16, 2018

Goldy is still around, most recently speaking at a Yellow Vests Canada event. Her stock in the alt-right has, however, fallen significantly after her failed mayoral run.
— Canadian Anti-Hate Network (@antihateca) December 16, 2018

I would think that would hurt at least a bit.

Goldy isn't alone in facing potentially damaging financial constraints. A number of "alt-right" and "alt-right adjacent" figures have been losing access to their lucrative crowd sourcing venues. Sites such as Patreon and Go Fund Me have been kicking these figures off their pages resulting in usual cries of "censorship" from folks who understand that this isn't censorship but also understand their own mouth breather supporters don't know that:

There are also those whose living beyond their means appears to have caught up with them and are now heavily in debt and are desperately looking for their next grift:

Milo Yiannopoulos for example is currently at least $2,000,000 in debt and his efforts to crowd source his way out of it hit a bit of a snag. Yiannopoulos was once one of the brightest stars on the "alt-right" scene until that "appearing to being okay with having sex with children" thing emerged. Further deplatforming has resulted in some rather bleak times for Milo.

Yiannopoulos had been booked to tour Australia and had hoped to turn around his fortunes, but it fell through as a result (and resulting in) a war of words between himself and the tour organizers. Emails of their exchanges have been released which indicate that Milo isn't ideologically driven as much as he is financially.

A character that ARC readers are familiar with also has a role in the Passion of the Yiannopoulos: 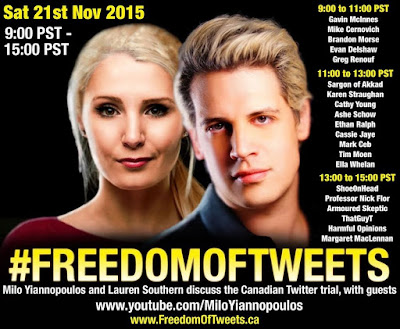 Lately Lauren Southern has been spending the last few months demonizing a refugee advocate using a heavily edited video resulting in threats to rape and murder said refugee advocate, getting herself banned from the UK, and facing financial difficulties due to a cancelled speaking event in New Zealand (notice the theme here). Previously Southern and Yiannopoulos appeared to be on good terms and had appeared with each other a number of times: 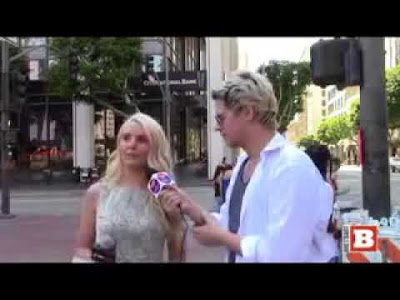 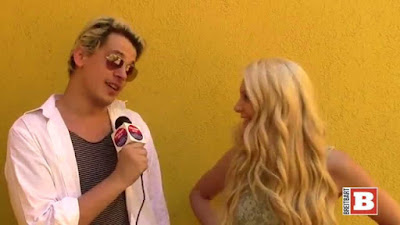 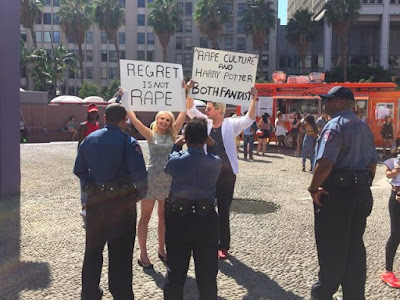 However some professional jealousy seems to have tainted their relationship over the past year as evidenced in the released emails:

Now of all the Canadian far-right personalities who have had a difficult few months, I think that this fella is probably at or near the top of the list: 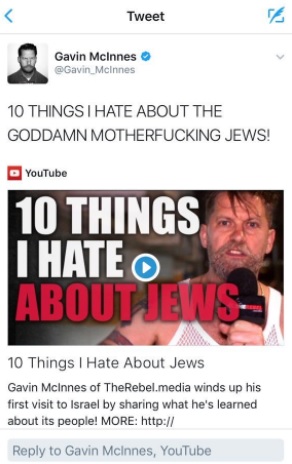 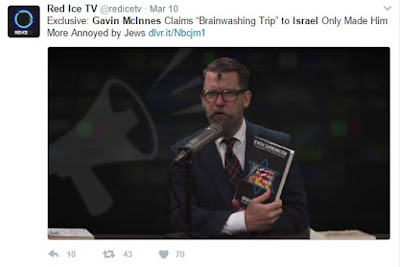 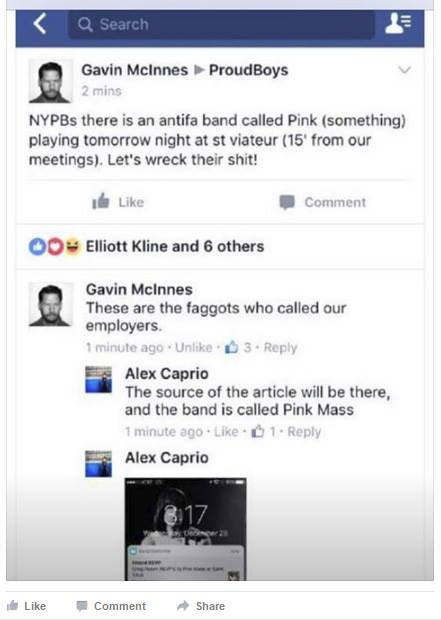 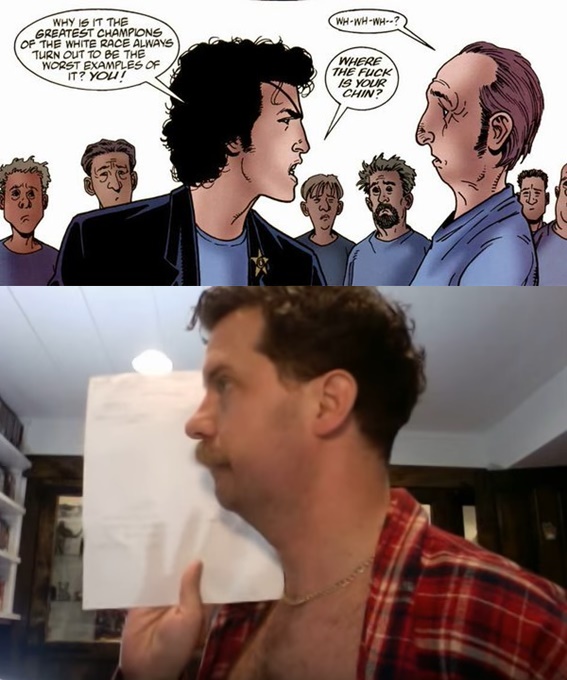 Where to start with Gavin McInnes?

Well I could start with the unprovoked attack by members of the Proud Boys against antifascist (and it was unprovoked) resulting in numerous criminal charges. Then there was the report that the FBI considered the Proud Boys to be an extremist organization with ties to white nationalists which was among the reasons why McInnes quit the group he had founded; turns out the FBI designation might actually not have been accurate. Because of the bad press the Proud Boys and many of the group's members were kicked off of social media platforms including Facebook, Twitter, and Instagram. McInnes lost out on an Australian speaking tour when he was denied a visa after failing a character test. He has also personally been banned on Twitter, Facebook, Instagram and for a time YouTube after numerous copyright complaints though he appears to be back on that particular platform:

Almost two years after he posted this.

Thanks for being all over it, guys. pic.twitter.com/WVv9MEDyIq
— Sleeping Giants (@slpng_giants) December 10, 2018

McInnes has also lost his job after being fired by Blaze TV after the takeover of CRTV:

Blaze Media no longer has a relationship with Gavin McInnes, and per company policy, cannot comment on personnel matters.
— BlazeTV (@BlazeTV) December 9, 2018

Most pathetic, he complains about his neighbors not being nice to him, you know, because he is an awful human being and all that goes with that.

Being reviled and deplatformed, there weren't many other places for McInnes to turn so it looks like he has decided to set aside any remaining dignity and self-respect and turn to Alex Jones:

If you slow down the video, you can pinpoint the spot where he's thinking to himself, "so, this is my life now."
Posted by Nosferatu200 at 20:07