I'm going to do my best keeping up with the events that are occurring across the country.

This was the size of the SA protest. pic.twitter.com/epFBETEkh0
— Jordan Gill (@jordandannygill) September 30, 2017

For comparison, this was the size of the counter protest. pic.twitter.com/uibNeKjH9O
— Jordan Gill (@jordandannygill) September 30, 2017

In Quebec, the far right have gathered in larger numbers, though this isn't necessarily a surprise. By one journalist's account, there are roughly 100 Storm Alliance members and supporters waiting to head to the border:

At the border itself though, the pro-immigrant counter protesters outnumbered the far right initially....

.... however that was before more Storm Alliance members arrived: 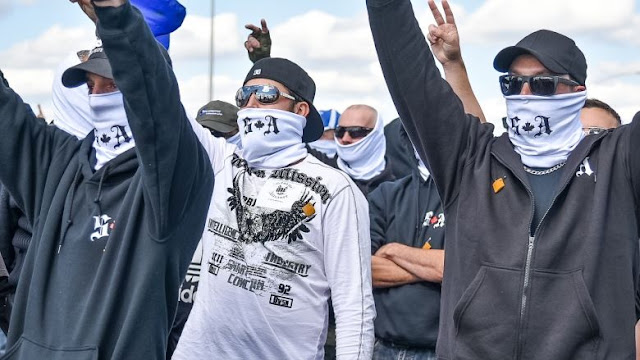 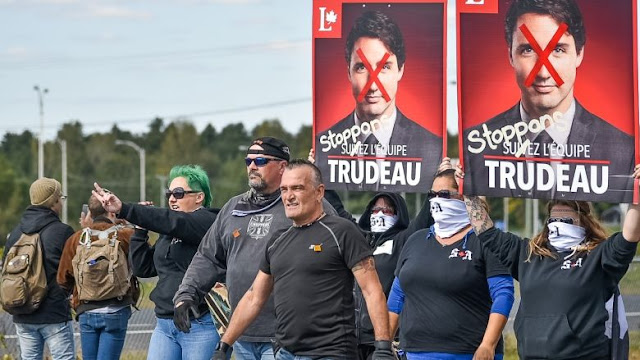 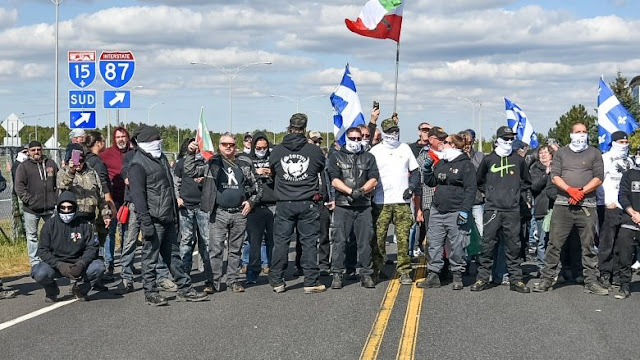 A report from the Revolutionary Student Movement - Concordia:

RSM Concordia was able to attend the counter demo supporting refugees and migrants entering Canada, while also taking a stand against the "Storm Alliance," a racist, anti-immigrant group.

Antagonisms began before the counter demonstrators even left for the border, as David LeBlanc, a known Soldiers of Odin member (another racist group founded by neo-Nazis in Europe) paintbombed one of the busses. He was arrested, along with another comrade, and comrades quickly took action, however, cleaning off the mess from the bus.

As demonstrators walked towards, we noticed the various police perched on top of nearby buildings taking photographs. Once the group arrived to the border, the police were quick to arrest a man for writing "ouvre les frontières" (open the borders) in chalk on a wall, but was released later with an apology and with a symbolic fine of one dollar.

RSM Concordia was able to briefly meet up with RSM comrades from Quebec City.

As we waited for the fash to arrive, the police divided the crowd, effectively kettling around 30 people closer to the border. This was eventually resolved as those kettled were able to pass and rejoin the main group.

At 12:20PM, the first wave of the Storm Alliance arrived, and the police effectively cordoned off counter protestors from the fash. A clever rewording of Cee Lo Green's "Fuck You" was sung in solidarity with migrants and refugees and against the fascists.

As the numbers of the fash grew as latecomers trickled in, police sent out riot cops around 1:25pm to further separate antifa and the fash. The riot cops made a small attempt to push the counter protestors further back, but were unsuccessful. As we jammed to good music and yelled chants, the Storm Allaince grew in number to at least 200 people. Despite their strong numbers, however, they were never able to pass us, and by 2:45PM, the fash retreated. Police prevented us from leaving until around 3:30PM.

Thanks to the collective effort of the crowd, the message was clear: No pasaran! We want to thank Solidarity Across Borders for organizing a successful counter demo, and we hold to help with anti-fascist efforts in the future.

In Niagara, the far right don't appear to have much of a presence and seem to be outnumbered by anti-fascist activists based on Arthur Smitherman's video of the event. ARC has learned that only around 10 far right protesters showed up including Smitherman and Eric Brazau.

There was also at least one incident where a far right protester is alleged to have attempted to run down anti-fascist protesters: 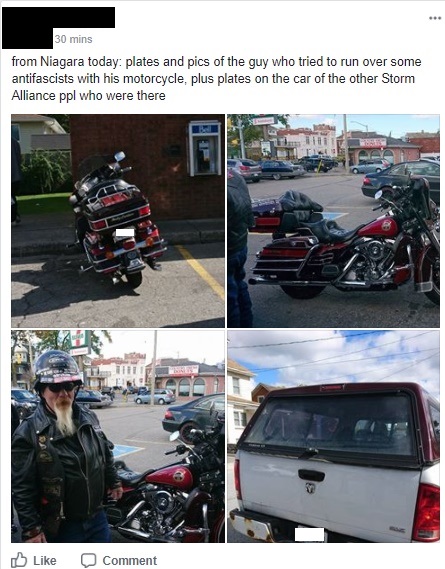 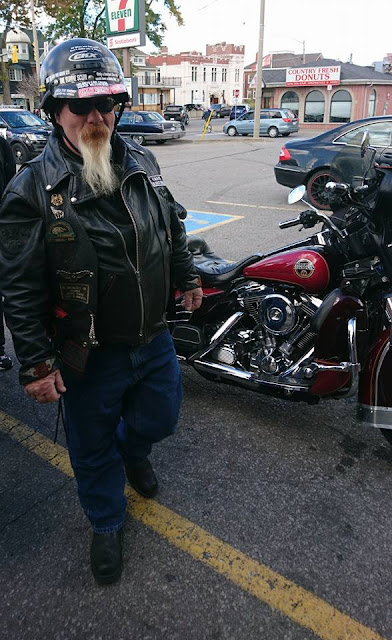 Reports suggest about 50 Northern Guard, Storm Alliance, and CCCC members vs. 100 or so counter protesters: 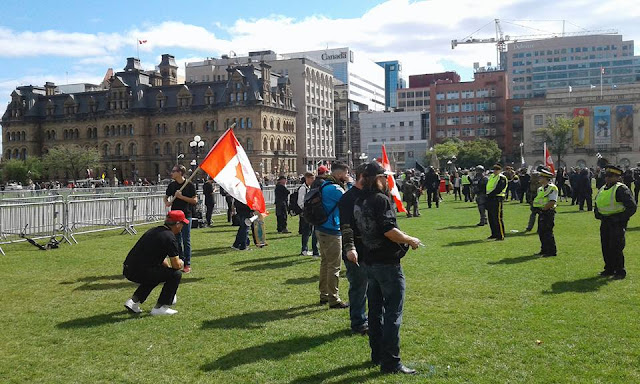 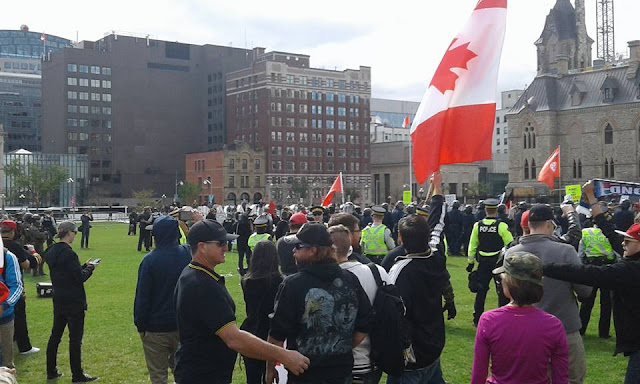 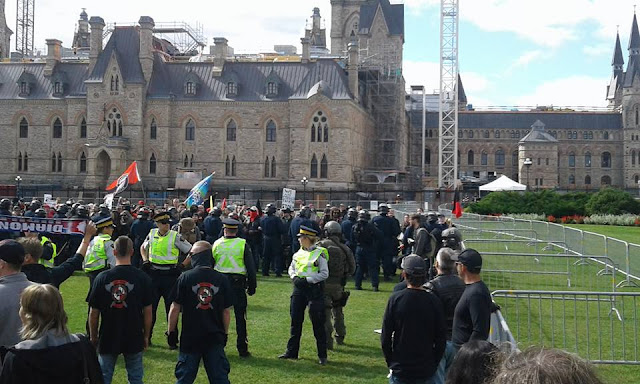 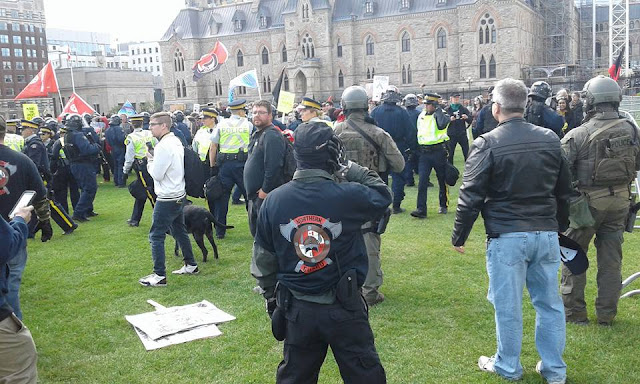 Of interest, the individual with the knife appears to be affiliated in some way with the Proud Boys. From a witness:

Okay so Ottawa antifash had 150-200 at peak. CCCC/SA/NF/Proud Boys had 50ish. There was that guy with a knife in the blue (I'll link a vid after this) that allegedly had a knife that was confiscated by police and he was allowed back into the protests. Guy in the blue is a Proud Boy according to Ottawa antifash. They will try to get me an ID on him. SoO were present around the time the antifash were getting organized and taking the space at 1030am (demo was for noon). No arrests that we know of. It's over now. 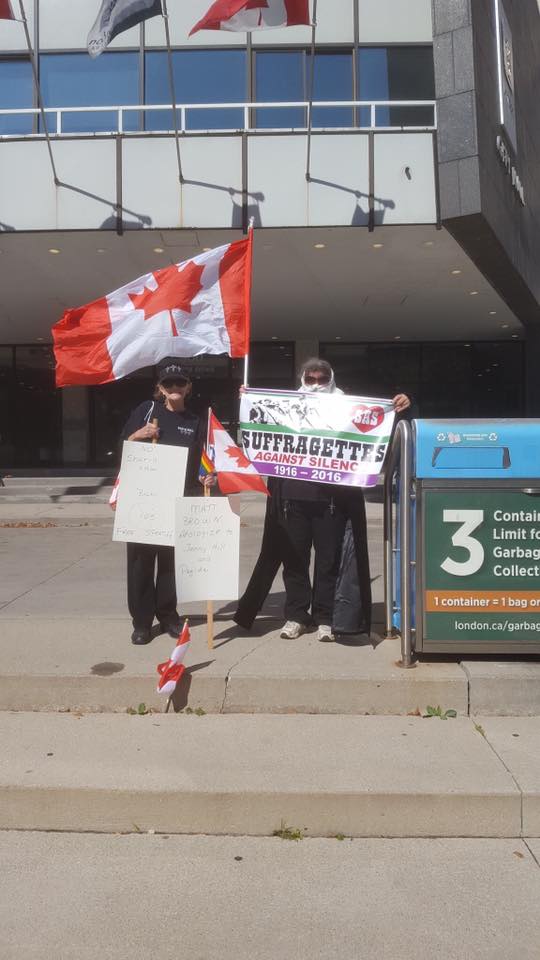 And that is really all that needs to be said about that.

I think we could chalk up another failure for the far right in Windsor. A report from the Revolutionary Student Movement - Windsor:


Earlier today, conservative nationalist group Storm Alliance, a splinter group from white supremacist organization Soldiers of Odin, planned a rally near city hall in Windsor.Or at least, they tried to, but only this sorry bunch pictured below showed up.

After being greeted by a large crowd of counter-protestors, comprising of RSM members, Wobblies, SHARPS, and other local comrades, these four Storm Alliance members gave up on their rally, cancelled their speeches, and went home.

The left in our city is strong. Today we showed that we will not allow white supremacy to infect our community. Solidarity! 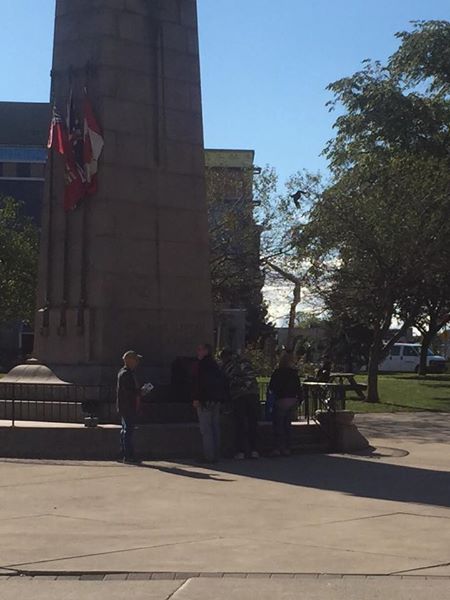 The Goudreau and any supporters he might be able to muster have not arrived as of the time this update was posted, though there does seem to be more than 200 anti-fascists and anti-racists ready to greet them should they decide to show up.

In Peterborough at the Anti fascist rally. Many people mockingly shouting "Where's Kevin?" ...which is confusing.
— Kevin Metcalf (@kbmetcalf) September 30, 2017

The good people of Peterborough have got this! So glad to see. #OpposeRacismInCanada pic.twitter.com/BCrhCyEsKN
— Darren Baptiste (@darrenbaptiste) September 30, 2017

Of course there's a possibility that the Goudreau may have bravely decided to hold his protest elsewhere, thus avoiding the counter protesters. That would also make his efforts pretty ineffectual.

A person who did show up was Paulie, though he made a point of staying FAR away from the actual protest:


One honest to goodness Nazi DID show up to the main event.... and was given an antifa kiss for his troubles:

The woman who was taken into custody was released however:

Woman who was taken into police cruiser has been released. #PeterboroughRally pic.twitter.com/Y1bPraSJFb
— Faiza (@CityFaizaAmin) September 30, 2017

Literal Nazi got punched in Peterborough, run off by antifascists. One arrest, one de-arrest. #NoHate
— Kevin Metcalf (@kbmetcalf) September 30, 2017

Eventually, the Goudreau finally decided to address the situation from the safety and relative comfort of his home: 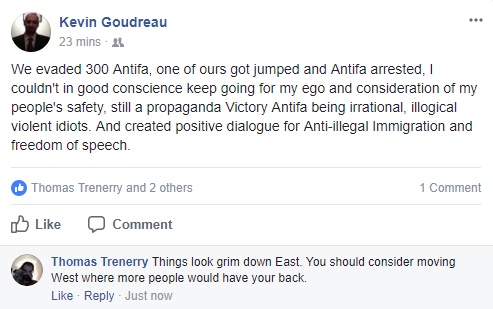 A protest was organized by Christopher Hayes, head of the Saskatchewan chapter of the WCAI.

A photo says a thousand words: 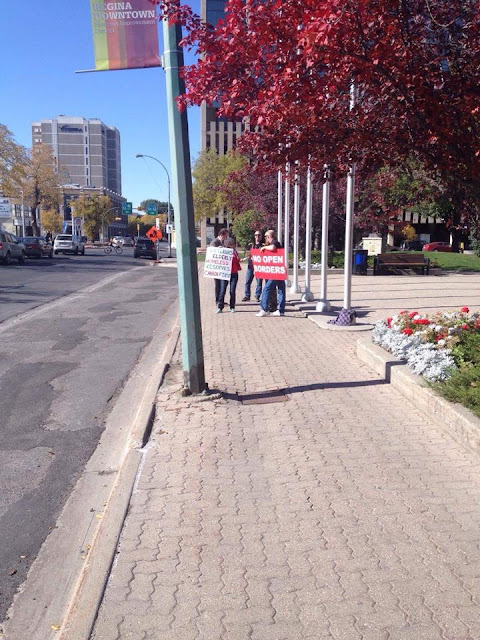 No information on numbers, but a video posted by one of the seemingly few who attended suggests that the event was a dud: 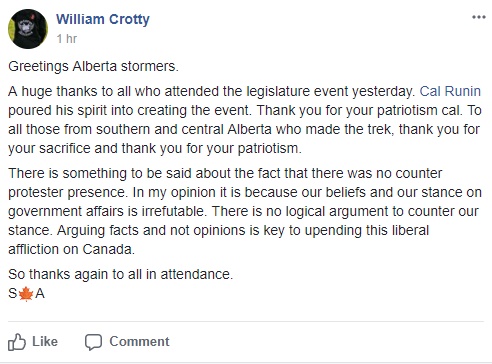 Or there were not counter protesters because your efforts were so minimal as to be irrelevant. I mean, that's an option too, right?

A very small group of around 20 far right protesters:

Anti-illegal immigration speaker addresses a handful of fellow demonstrators at the Peace Arch Border, says she was once "allergic to news." pic.twitter.com/RPd44cDzkx
— Sarah MacDonald (@CTVSarah) September 30, 2017

Here's the scene at the Peace Arch Border. ~20 anti-illegal immigration protesters in the foreground, with counter protesters at the arch. pic.twitter.com/6o3lTR5RzW
— Sarah MacDonald (@CTVSarah) September 30, 2017

Among those who said he would show up was one Glen Dumont:


Thus far there has been nothing heard from Emerson, MB so I'm calling it a bust there. If there is any more information I will update as appropriate.
Posted by Nosferatu200 at 12:16