Before getting into the news of today's PEGIDA event in London, ARC would like to direct readers' attention to this article detailing the history of far-right racist activism that has been present in the city for longer than this blog has been active. PEGIDA Canada in that context is merely the most recent manifestation of this phenomenon in London.

Regarding PEGIDA, after the drubbing they received in August, PEGIDA members decided to take another stab at rallying in London under the banner of preserving their, "free speech": 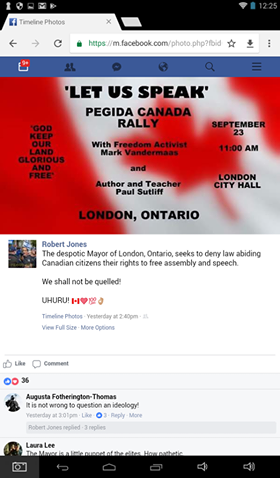 This change on tactic is in large part seems due to the efforts of Mark Vandermaas, a figure that some of our readers may remember from his involvement in the Caledonia stand-off. Now Vandermaas seems to have decided to take on the PEGIDA Canada cause filing by filing a code of conduct complaint against the London city government. A few days after filing his complaint, Vandermaas posted the following self-congratulatory video:


ARC was sent information from someone with knowledge concerning the inner-workings of PEGIDA Canada which includes speculation about Vandermaas' involvement:


Since reading your blog and the wealth of evidence about Pegida, I thought you'd be interested in Pegida's effort to try and whitewash their image. That seems to be a new trend among hate groups and hatemongers. I also did a bit of research on Mark Vandermaas.... In his complaint he claims that he just happened upon Pegida during the rally, and felt that they were getting a raw deal so after the rally he stepped in to offer his help. However, in his other Medium posts he admits to having planned things with Pegida (aka "Jenny Hill") in advance of the rally. He even posted a pic of himself - behind the Pegida banner, participating in the rally! He has another "evidence" photo which he claims shows "Jenny Hill" counter protesting against Al Quds. Trouble is, it's Lynn Redden, and the way the pic is framed you can't see any background to confirm where she is. "Jenny Hill" was too cowardly to attend Al Quds last year (when I was there) and even forbade Pegida members from wearing or carrying anything bearing Pegida's name or logo. Vandermaas' claim is that Pegida can't be racists because they are "friends to Jews". Hence the Al Quds pic. He even describes Pegida as a "civil rights group".

Vandermaas has a history of interfering in matters which are none of his business. You can Google him and find some more info about him and his prior antics. He must be delusional if he thinks he can convince (or sue) anyone to defend Pegida's stellar reputation. I sent you the link on Medium with his 45 page complaint. Since then I have found three other Medium entries by Vandermaas about the same complaint against London city council. In every entry he repeatedly makes veiled and overt threats to sue the City of London. He's not a lawyer but uses "orders of mandamus", an ancient legal writ that commands the legal system to perform its functions. He has successfully sued the OPP and others in the past using this tactic. Here's one article with details of what we may be up against.

With my prior and intimate knowledge of Pegida Canada, I will not stand still and watch while this idiot fills the public's heads with baldfaced lies about what is, and always has been, a vicious hate group. Their complaint relies on accusations by London city council that they are white supremacists, among other things. They're not white supremacists, since they attract non-white bigots (Hindus in particular) however, every other accusation against them is rock solid. Vandermaas' claim that they are friends to Jews (and therefore "not racist") is laughable, as I'm sure you know (I read your blog entry containing Pegida's anti-Semitic posts). The only Jews they associate with are JDL, this gives them access to hurl their hate at Muslims during Al Quds rallies, and sometimes JDL provide security for Pegida.


I emailed the Mayor and all of the Councillors with a sample of the information I've gathered about Pegida and Vandermaas. I sent them racist quotes from Vandermaas' articles on Medium, both against Muslims and against Natives in an article he wrote about his "heroic" interference in the Caledonia standoff. I also sent them screenshots of Pegida's reactions to the Rohingya genocide. Vandermaas is claiming he's not a member of Pegida, so I sent them a pic of him participating in the Aug 27 rally waving an Israeli flag and standing directly behind Pegida's banner. (The screenshot includes two Pegida

members/fans calling him a "cuck" for carrying an Israeli flag.) He's also speaking at their next hate rally along with an.... American hatemonger.

I pointed out to them that Vandermaas' accusation that city politicians "incited" or organized a "mob" of counter protesters is ludicrous because, in my experience as a Pegida protester, Pegida has no trouble attracting angry mobs by themselves because of their repugnant ideology. That is why they're trying to move their base of operations from Toronto to London - because they were literally driven out by public hostility and lack of media attention. I got an answer shortly afterwards from one 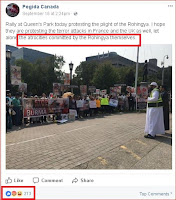 Councillor who directed me to forward my message to city council's Integrity Commissioner (which I did) because he is the one who's investigating Pegida's complaint. The Councillor told me that my information is "very interesting". You're probably aware that Pegida plans another rally called "Let Us Speak" in front of London City Hall this coming Saturday the 23rd. It would be nice if city council came back with a decision before then.

At this point none of them knows much about the law, or they'd know that libel, slander and defamation actions hinge on falsehood. In other words, you can only sue someone for saying bad things about you when what they're saying is untrue. If the defendant can prove that what they said was true, the case gets thrown out.

What Vandermaas is doing is slightly different. He calls himself a "rule of law activist". 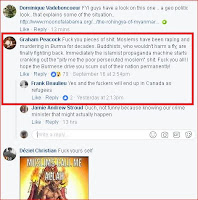 All this means is that he's studied enough about the law that he knows how to make threats that intimidate his adversaries. He is threatening to have the police press "criminal defamation" charges against London City Council. Such a charge is also known as "defamatory libel". This is under s. 301 of the Criminal Code (federal). Unlike civil defamation, criminal defamation charges can be laid against someone even if they're telling the truth. However, this rarely-used statute, a relic of the early 19th century, has been struck down in court cases in five provinces including Ontario, with charges laid against people being thrown out. Even so, Canadians can still be charged under s. 301, and will still have to endure the criminal court process starting with arrest, jail time and legal fees. It's debatable whether Vandermaas would actually carry out this threat or whether the police would cooperate with him and arrest London politicians, but the option is there.

If Vandermaas succeeds in manipulating London politicians with the threat of having them arrested under s. 301, he will surely brag about his success to other hate groups and they will issue similar threats of their own to force politicians to allow them to 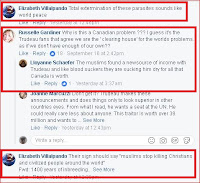 spread their hatred. Another potential result is that the attempt may backfire. Judges and lawyers as well as the mainstream media don't like hatemongers any more than the public does, and there have already been several attempts to have s. 301 struck down. A hate group using it against municipal politicians to force them to permit hate rallies could be the catalyst to finally have this section stricken from the Criminal Code.

ARC has had a long conversation with this source regarding her past involvement in both PEGIDA Canada and, briefly, Ron Banerjee's RISE Canada. That interview will be published at a later date but suffice it to say for now that it was very enlightening and is further proof that people who hold even the most vile, hateful, views can change.

In the meantime, PEGIDA Canada did hold their "Let Us Speak" rally in London today. And as they were on August 26, the PEGIDA members and their Soldiers of Odin supporters were very much outnumbered:

So it looks like pegida is taking off after being severely humiliated and outnumbered. We're just hangin' out making noise now :D <3
— Bailey Lamon 🏴‍☠️🏴 (@UptheCypherPunx) September 23, 2017

After forty minutes, PEGIDA is outnumbered, on the move, there have been two arrests, and at least one got biffed. 😂 https://t.co/KWAgLtp573
— Tsercele 🏴 (@tsercele) September 23, 2017

And so it begins. Small group of Pegida ppl on one side, larger #Antifa group on the other. Separated by cops.  #LdnOnt pic.twitter.com/GXJbUuvWlQ
— Bailey Lamon 🏴‍☠️🏴 (@UptheCypherPunx) September 23, 2017


Further reports suggest there were some arrests of PEGIDA supporters that took place though at the time of publishing I'm still looking for details. I did find a video of an SoO member being led away by police officers, though it isn't clear if the individual is under arrest since he was not placed in handcuffs:

After forty minutes, PEGIDA is outnumbered, on the move, there have been two arrests, and at least one got biffed. 😂 https://t.co/KWAgLtp573
— Tsercele 🏴 (@tsercele) September 23, 2017

UPDATE: It appears that two people were arrested, one a PEGIDA member and/or supporter and the other a counter-protester.

So, the folks organizing the "Let Us Speak" rally did, indeed, speak.

It's just that people who opposed them spoke much, much, louder.
Posted by Nosferatu200 at 14:26