The far-right in the country are continuing to prepare or September 30 and their Anti-Trudeauoloza festivities planned for various spots along the border. ARC is guessing that it will probably look somewhat similar to the anti-M103 events that took place during the spring -- some locations better attended than others -- but with numbers overall somewhat down as protest-fatigue sets in and the weather grows colder in some areas.

Quebec, having some of the more organized and larger ultranationalist movements such as La Meute, Atalante, and Storm Alliance, figures to be one of the more substantial protests. However there does seem to be some friction in at least one of the groups: 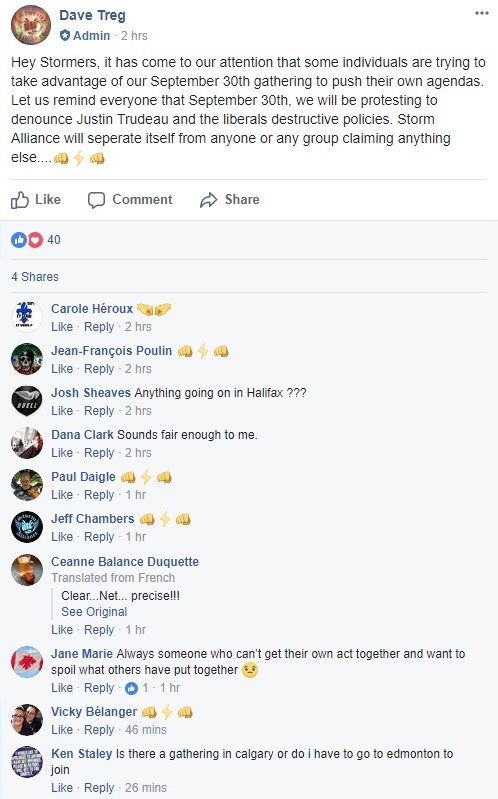 There are also rumors about the leadership being angry about buses being rented but not being filled since people who said they would be attending are flaking out, diminishing their numbers but, perhaps more importantly, costing them money that they would have rather not spent unwisely.

It will be interesting to see the Quebec numbers.

There will also be a contingent of the Quebec far-right making their way to Ottawa.

Yeah.... they are a benevolent bunch, ain't they? I mean, sure the police will be there keeping people apart, but how much better to have a militia-type group seemingly with a penchant for at least rhetorical violence helping out? And they certainly aren't there to try and intimidate those who disagree with them.

Now, ARC has been taking a close look at the Northern Guard over in a series of articles over the past couple of weeks, a series that will continue. In the first article the groups misogyny and casual racism and Islamophobia were the focus. In the second article my attention turned to the anti-government and reliance on fake news and conspiracies. In both the theme of violence was prevalent as a means of achieving political goals as well as simply a end unto itself.

This post will take a closer look at some of the members and supporters who aren't even trying to cover up their racial views.


In the first article, it was noted that Kevin Goudreau (who is organizing a rally in Peterbourough on Saturday and will be the subject of an article soon) was a member of the Facebook group. Despite ARC exposing this and statements that he should be removed from the group, he remains a member seemingly in good standing:

Kevin isn't the only person who has been discovered who is associated with white supremacist groups or views.

Eric has a photo of himself beside a very interesting symbol: 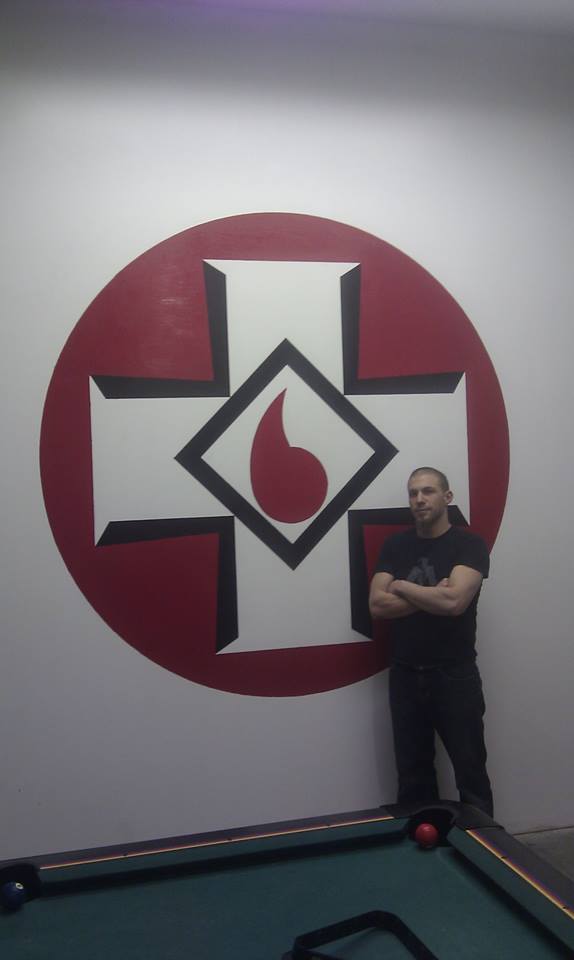 While ARC readers may know about the Blood Cross, those who happen to be unfamiliar with the symbol might be interested to know of it's origins: 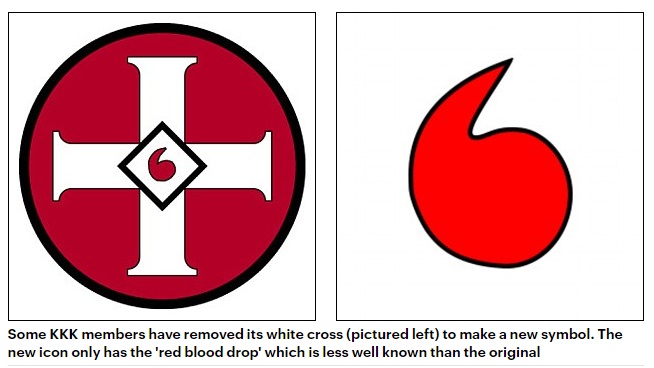 Eric confirms his link to the Ku Klux Klan, at least the ideology, with a reply to another racist this blog has kept an eye on, WCAI vice-president Jesse Wielenga:

As the Anti-Defamation League explains:

Interesting. And of course I'm only getting started:

Wes Smith is the head of the violently racist and antisemitic Creativity Movement in Toronto and, likely, Canada. His associates include infamous Canadian white supremacist Paul Fromm and Max Hynes of the now seemingly moribund Southern Ontario Skinheads: 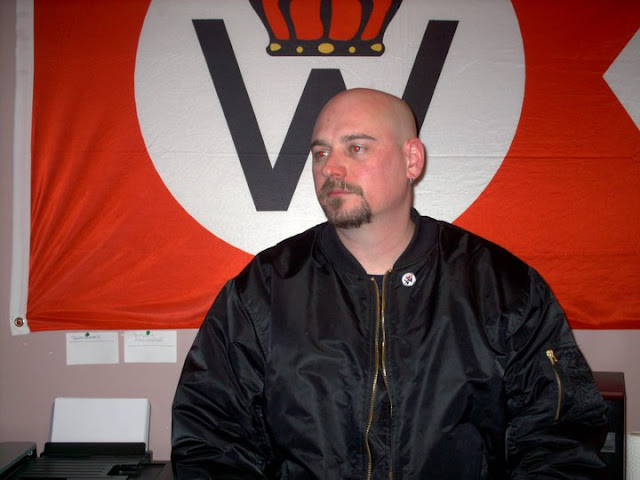 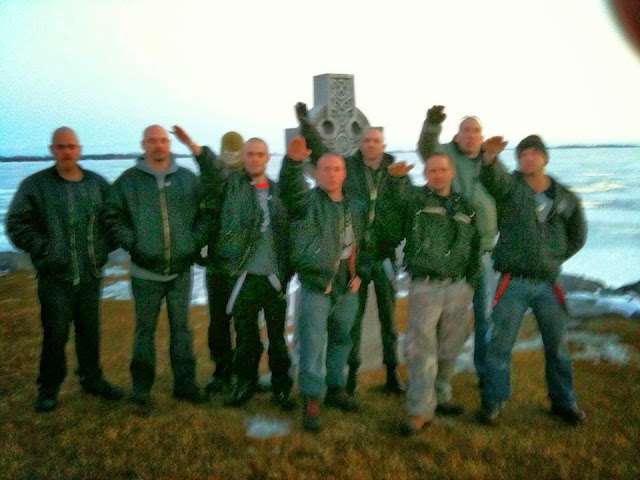 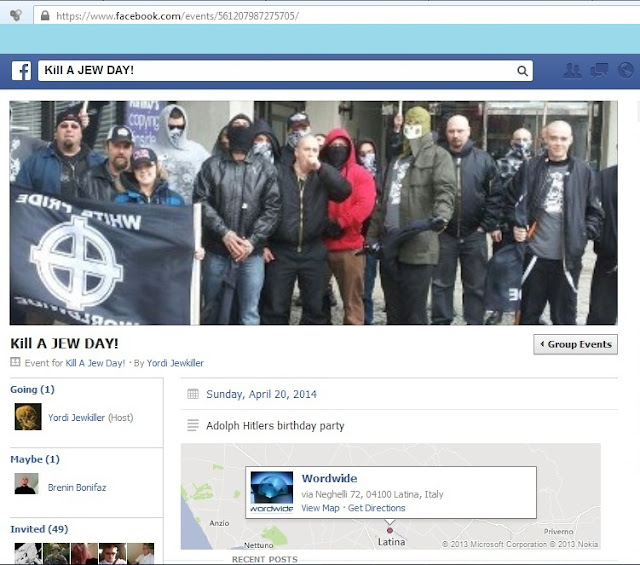 Derek was also once associated with the Soldiers of Odin. He also has links with Fromm and New Brunswick area boneheads: 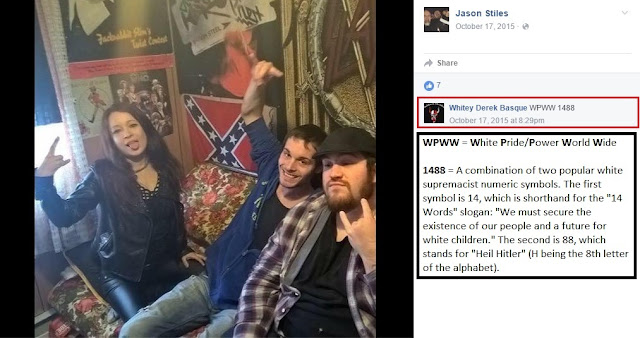 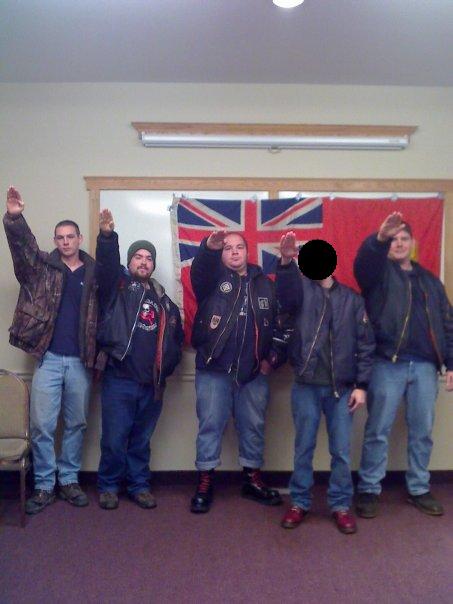 There are also a few faces that are new to the scene but who's online presence suggest views that align themselves with the white nationalist cause. These three for example.... 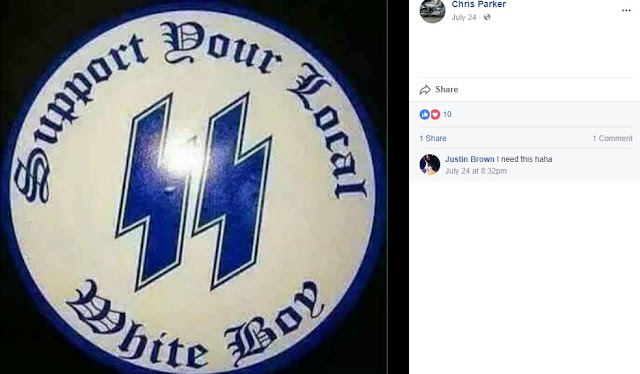 And finally this Kekistan hipster: 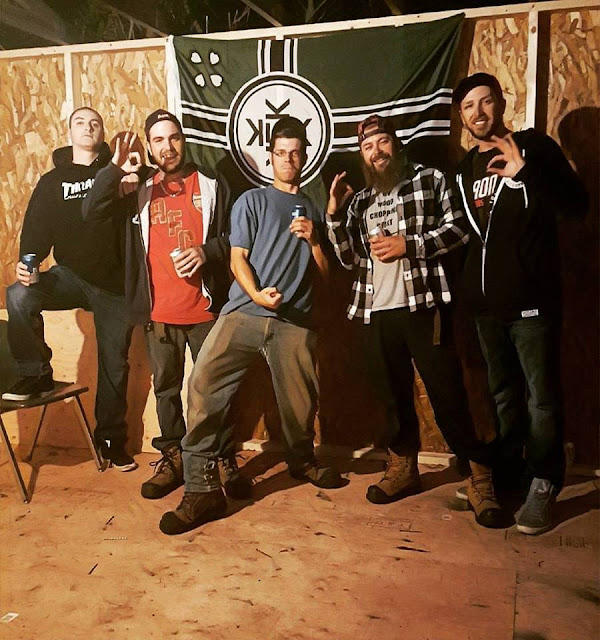 And because he's a class mofo:

Yeah.... not doing much to help dispel that misogyny accusation there Matty.

This represents a rather cursory examination of the membership. Of course ARC had already featured posts such as these in the first article on the Northern Guard from others: 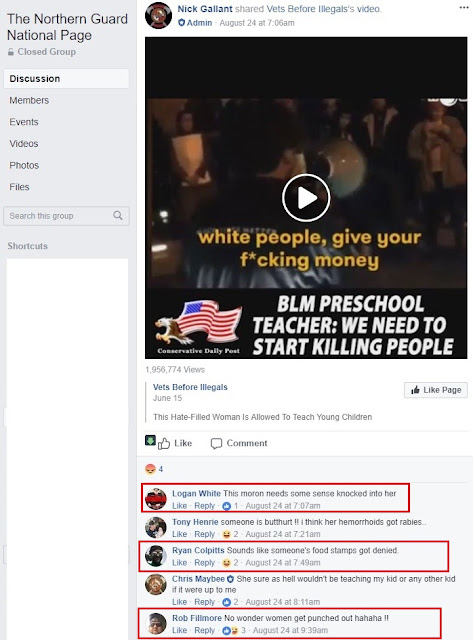 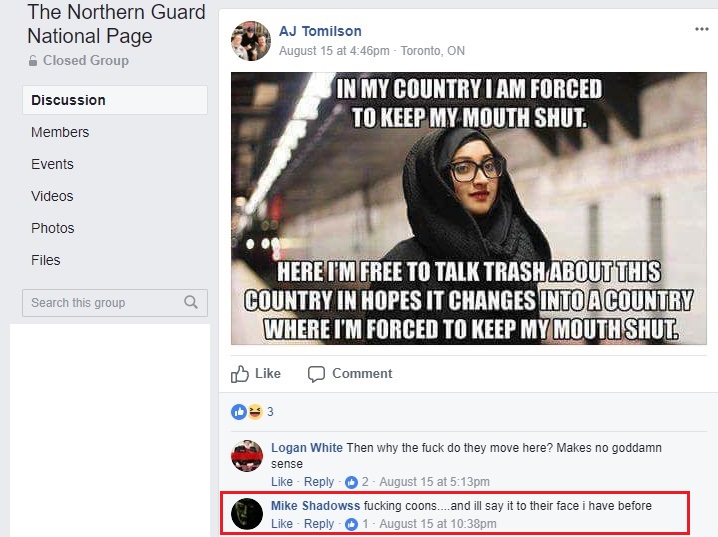 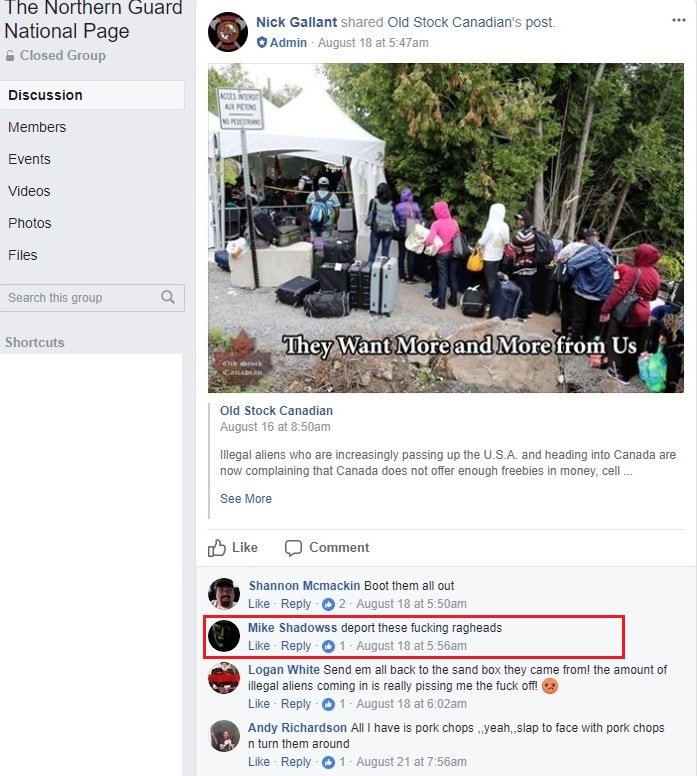 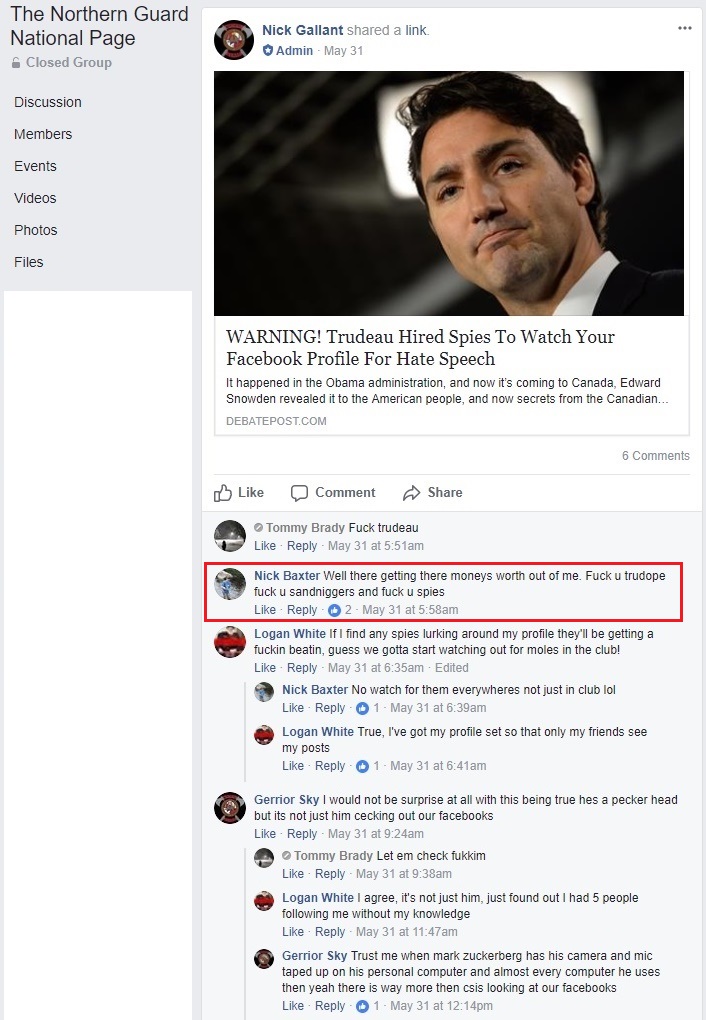 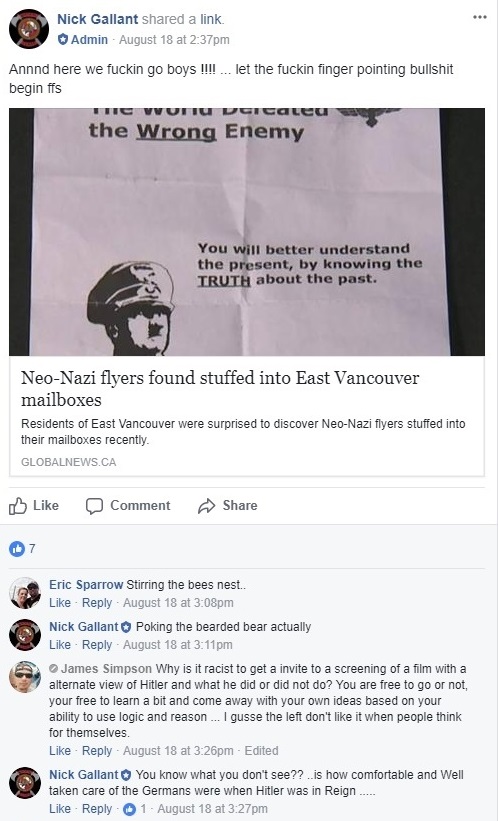 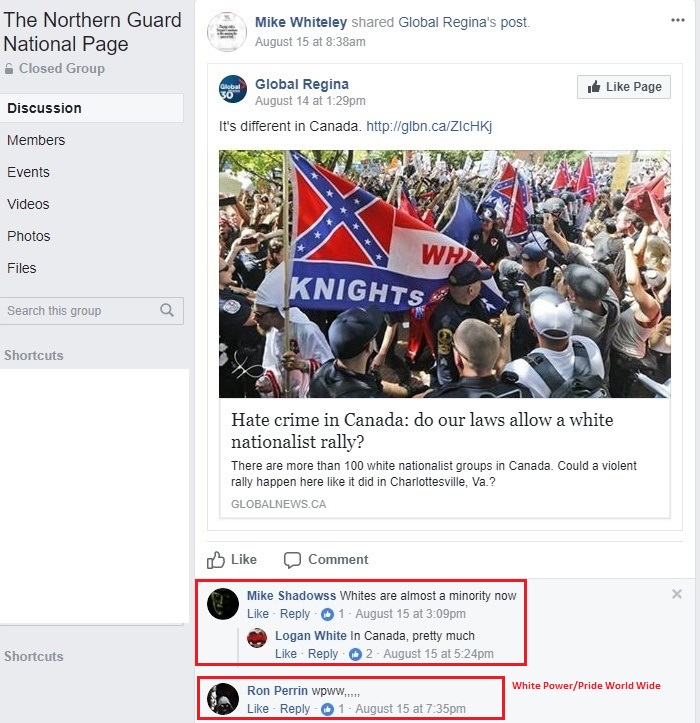 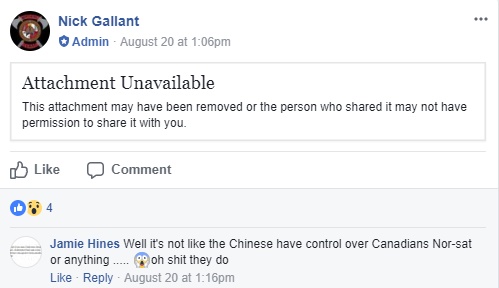 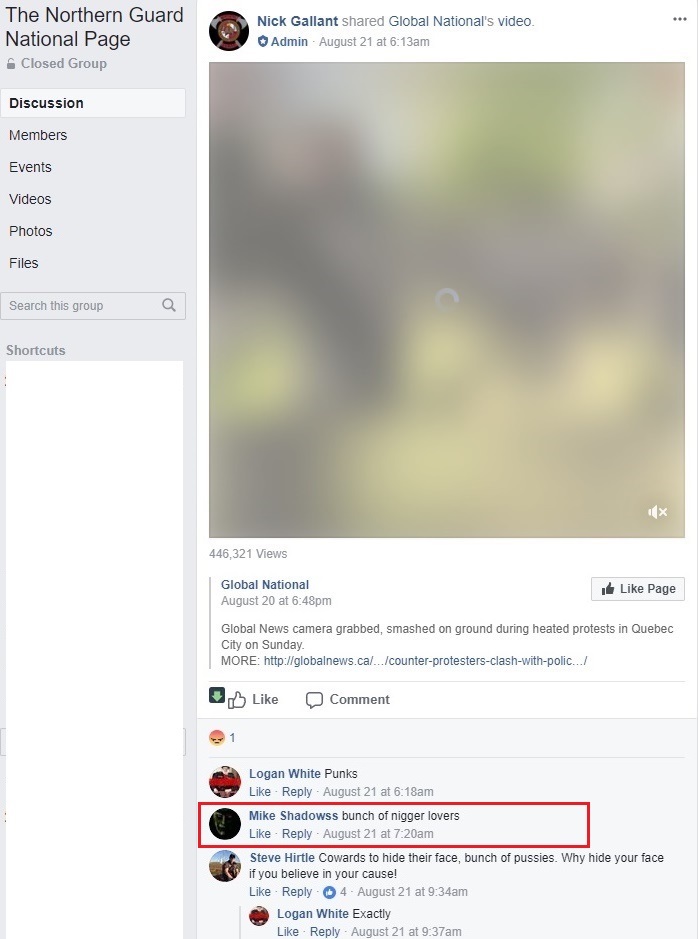 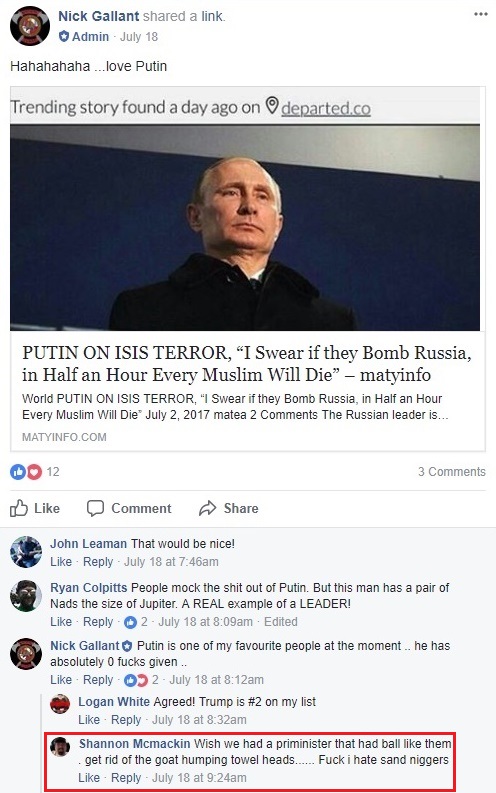 And if one thinks that this rhetoric is confined to supporters and the general membership, this was found on the Northern Guard vice-president profile: 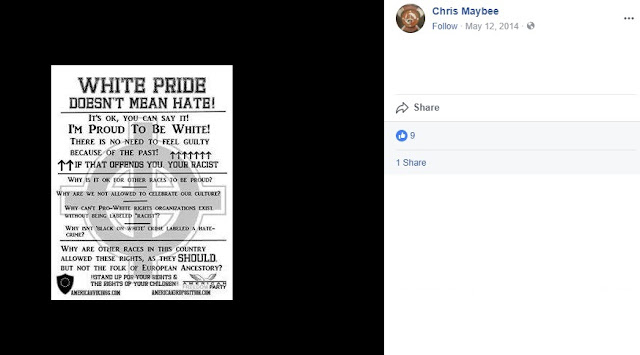 And we couldn't conclude this article without including one final post by Jesse Wielenga in which he and Northern Guard founder and president Gallant have a discussion concerning race:

But god forbid you call them racist.... or post their own words confirming that characterization.