We've been understandably focused on the tragedy in Quebec City -- an event that we consider to be a terrorist attack in which a white nationalist murdered six Muslim men and wounded several others -- however another interesting event occurred during the past 24 hours that will be of interest to our readers: 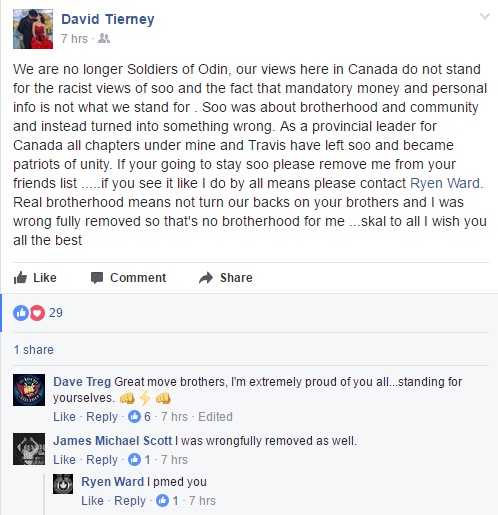 It seems that one of the conflicts that has emerged over time is the collecting of dues. The national leadership of the SoO decided that they would start collecting dues from members having never previously done so. These dues are to be submitted to SoO National President Joel Angott. A portion of money collected would then be sent to Mika Ranta in Finland. There's more to this story and we intend on digging into it in more detail, but suffice it to say that this newish rule (we're not certain how recently it was made) was the straw that broke Jörmungandr's back.

We see that Dave Tregget, formerly of the SoO as Quebec chapter president and national vice-president, now leader of another break away faction (along with the former Alberta and New Brunswick provincial SoO leaders) Storm Alliance congratulating the former SoO leadership for this move. On January 1 we published an interview with Mr. Tregget who voiced similar misgivings about the national leadership of the SoO.

The fallout from David Tierney's post announcing he and Travis Stovin, now former co-presidents of the Saskachewan chapter of the SoO, were taking the entire Saskatchewan chapter with them has been a fascinating car wreck and includes posturing and threats of recrimination from current members and leadership in the SoO, especially emanating out of British Columbia which is perhaps the most active chapter in Canada (though Saskatchewan was perhaps a close second): 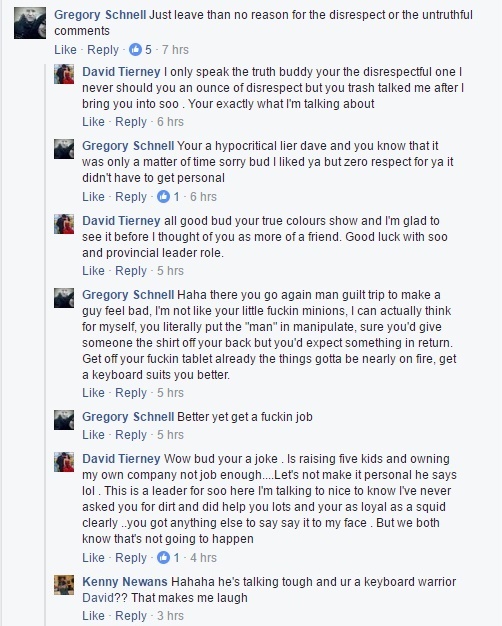 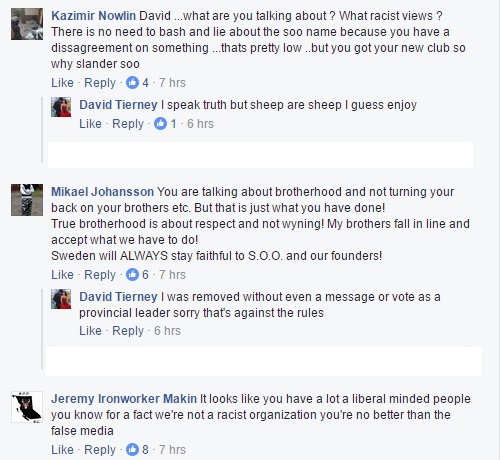 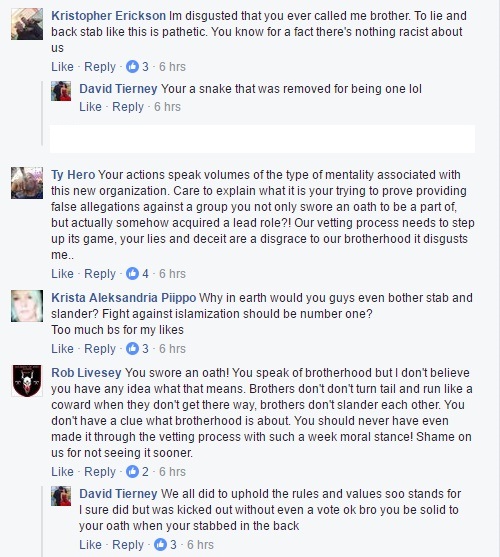 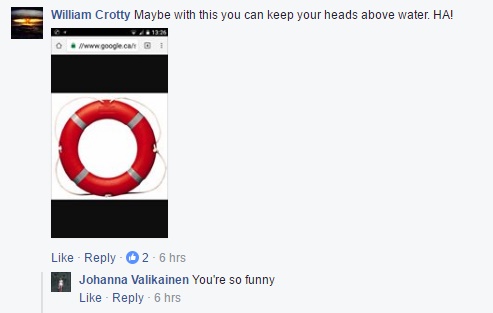 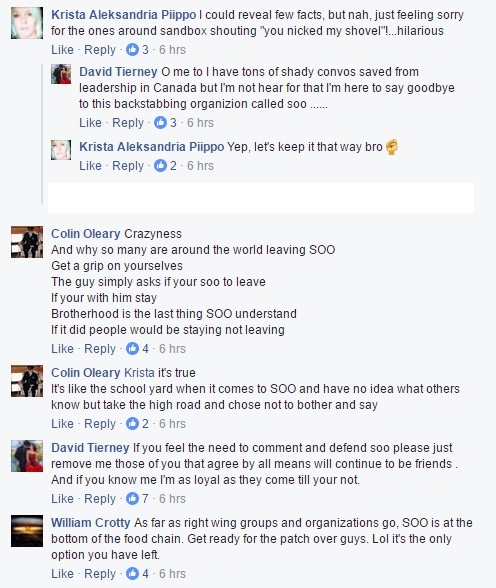 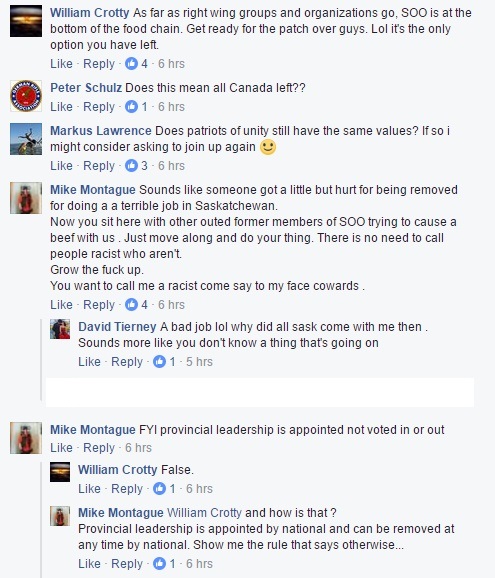 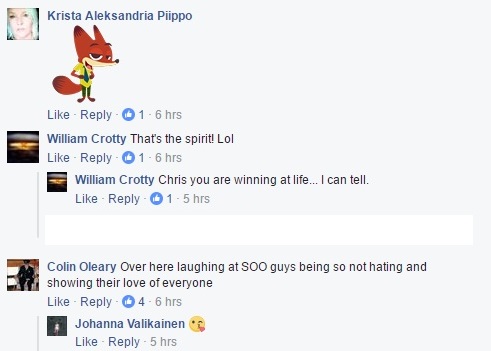 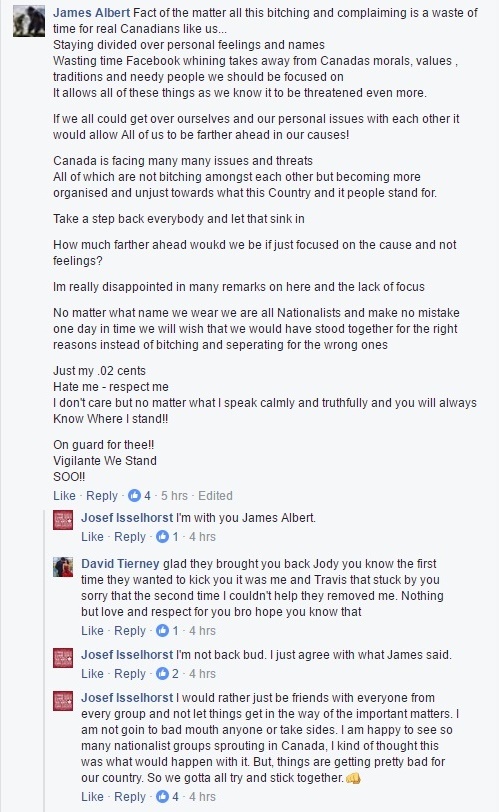 If one of the reasons why the Saskatchewan SoO broke away from the Canadian SoO was because of the racism of the organization, especially out of Finland (Soldiers of Odin founder Mika Ranta is, of course, an unapologetic neo-Nazi), then perhaps giving props to Jody Issel isn't such a good idea: 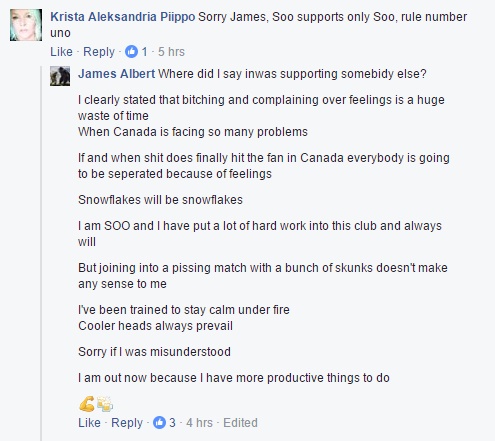 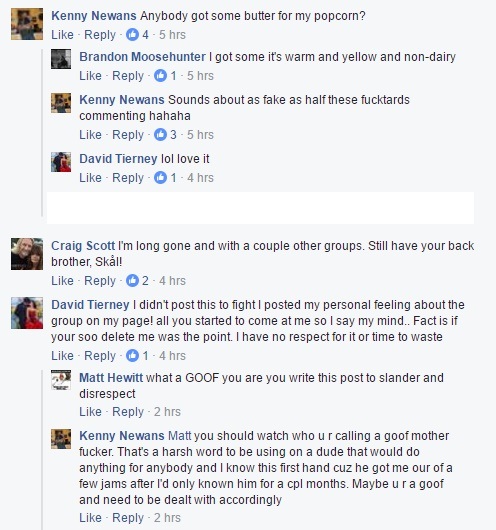 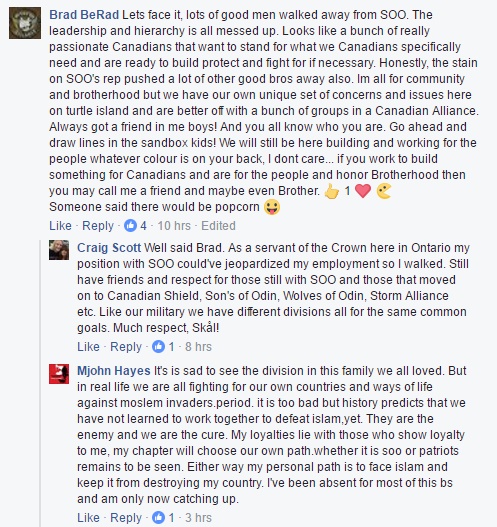 Mjohn Hayes sort of shows his hand and reveals what we've always said about the SoO and most of the other "patriot" groups that have popped up over the years:

"But in real life we are all fighting for our own countries and ways of life against moslem [sic] invaders.period. [sic] it [sic] is too bad but history predicts that we have not learned to work together to defeat islam [sic] yet. They are the enemy and we are the cure."

First, that last line is a pretty lazy malaphor. Or perhaps we should call it a mixed idiom? Either way, poor form.

Second, thank you once again for confirming what we've been writing for years concerning the motives and ideology (such as it is) behind the SoO. Much appreciated. 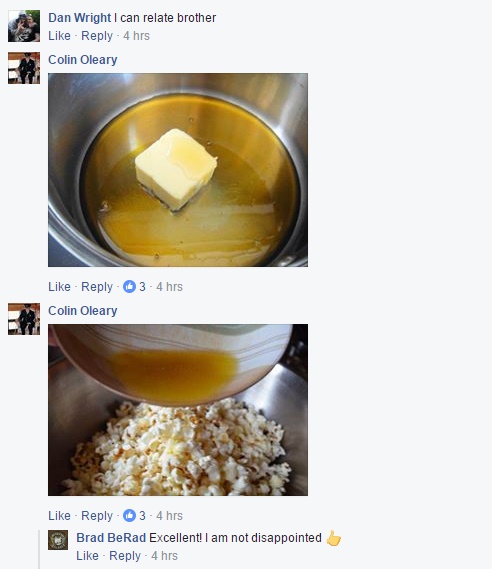 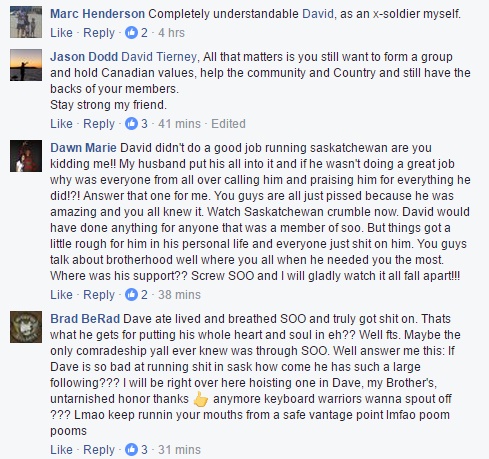 We're sure there will be more information during the next few days and weeks, though this pretty much sums it up.

So, where do things go from here?

Will the SoO try to restart a Saskatchewan branch? And if so, how antagonistic will the new SoO chapter be towards people who they would regard as oath breakers? The comment that the breakaway members had better "watch their backs" might perhaps be cause for concern since it suggests the possibility of reprisals and counter reprisals.

That might at this point be going a bit far, but no doubt there is at least an element of danger in all of this.

We'll of course try to stay up to date with information as we receive it.
Posted by Nosferatu200 at 20:03

These trailer trash racist groups always end up turning on each other.

SOO's dismissal of David Tierney seems to coincidentally be around the time David Tierney was arrested during a large drug and weapon bust.

Patriots Of Unity claims they've split because SOO is racist and that POU has different views. Unfortunately, this is completely contradicted by what we already know about the current POU members from their time in SOO Saskatchewan. Individuals like Ryan Ward have already had their discriminatory views well documented on ARC.

Perhaps POU thought they could rebrand by dislodging themselves from SOO. Well, it's too late for that.

Jody was brought back by people outside Saskatchewan. Saskatchewan doesn't want him or his views

Does this mean that C18/B&H are the longest running Neo Nazi group in Canada? Seems like every other group as the shelf life of a tomato.

As far as I'm concerned, the SOO are better off without David Tierney and the others who were removed, I am a loyal supporter of SOO Canada "united we stand, divided we fall"