Students For Western Civilization: Trolls, But Still Interesting (Part I)

This past week a number of articles were published in the United States and Canada regarding the emergence of a group calling itself Students For Western Civilization that has been attempting to form a White Students' Union at a number of universities and colleges. The group has been known to have existed since September 2015 when they began placing signs across university campuses, including York, Ryerson, and others, an example of which could be found on the group's Facebook page: This provided 40 year old, balding, non-university student Tommy Winnicki yet another opportunity to be creepy....

.... as well as offering advice to the students who might be reading posts: 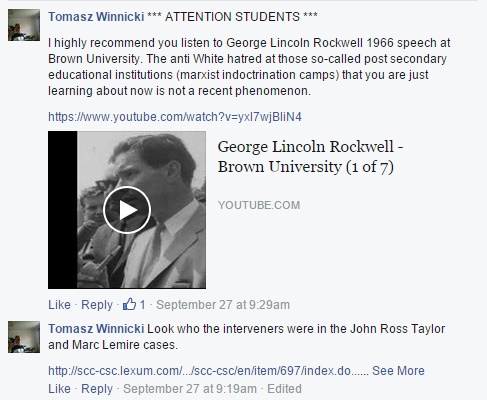 In fact Tommy is one of the more prolific posters on the Facebook page offering what he considers sage advice:

One has to wonder if Tommy Winnicki might not feel a bit of envy (and perhaps a bit impotent) considering that this is yet another group of "White Nationalists" who are doing something while he is only watching from the sidelines?

But is there anything even anything to the Students For Western Civilization in the first place?

This past week more posters were put up at Canadian and American universities and again. By coincidence, a freelance journalist whom we had been in contact prior to this past week who was gathering information published an article concerning the White Student Union movement (such as it is) and its links to the group associated with Matthew Heimbach.


The Mainstreaming of White Pride by Heidi Loney

We invite our readers to take a look at Ms.Loney's article as it is very good.

Not long after Ms. Loney published her article, the folks at the Western Students For Civilization began complaining that the article was inaccurate: 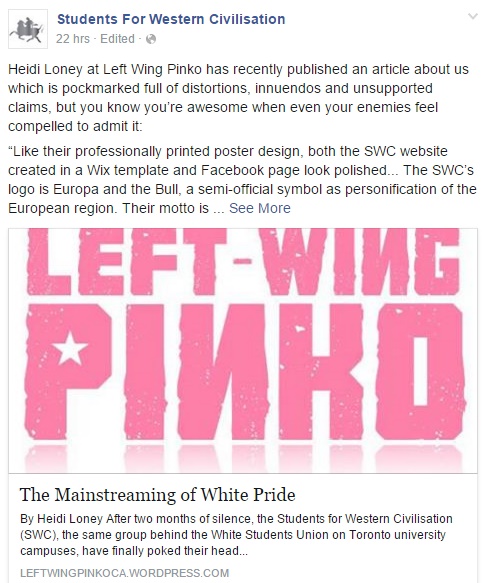 Again, Tommy Winnicki couldn't help himself, commenting on Ms. Loney's article as well as posting about it on VNN and Stormfront: 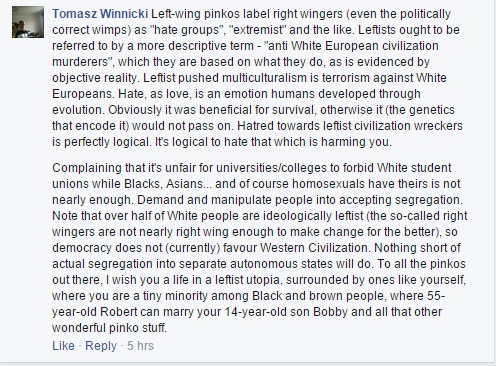 However, it has been very strongly suggested that Students For Western Civilization may very well be an elaborate troll.

Well, maybe calling it elaborate is gilding the lily a wee bit.

In any case, an article in the "London Free Press" also explores the issue of whether this may just be a hoax. After all, the social media presence of these groups doesn't seem to exist prior to September 2005 when VICE published their article on the group that same month.

But when one looks at the Canadian Facebook page, it appears that the group did exist prior to the media coverage of the last two months: 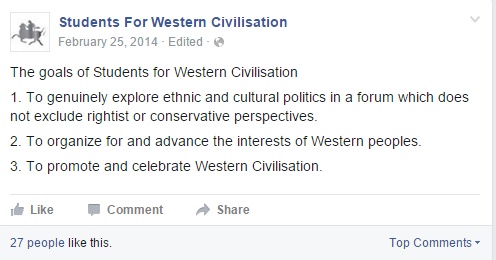 This was the first post found on the group's Facebook page. February 25, 2014, well over a year and a half before the group announced its existence to the world.

Still, we couldn't help notice that the earliest of the comments posted were from September of this present year with none before September 14, 2015. For example:

So, noticing that the original post had been edited, we took another look: 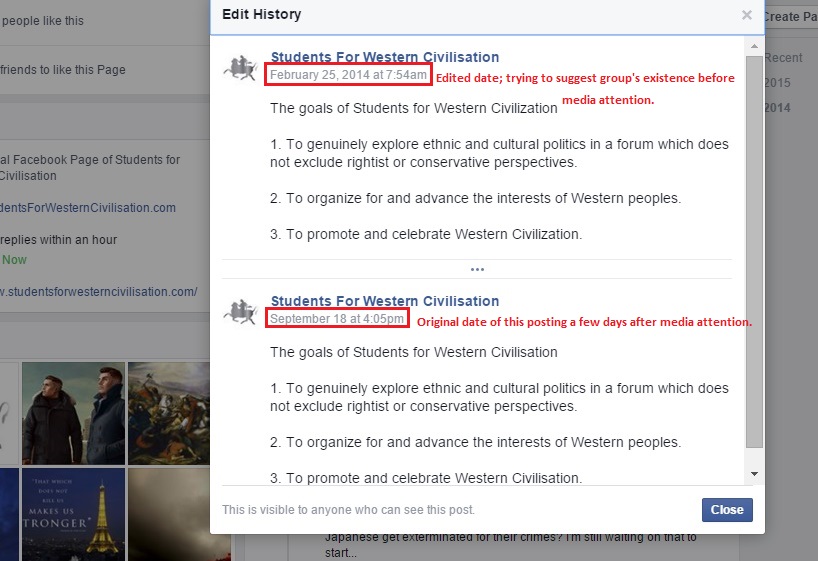 So, this group did not exist prior to September 14, 2015 though they do seem to be trying to place their origin at an earlier date.

Seems the suggestion that this is a hoax may very well be accurate.

But with this in mind, Students For Western Civilization is still of some interest to us. Since physical posters have been put up on university campuses in Canada, there are at least some people who are actively trying to make it seem as if this is a real group.

We can't be certain who those individuals are, but we think there may be some hints in the VICE article. More specifically, those hints may be found in the comments section.

We'll explore this issue more in our second article on the subject.
Posted by Nosferatu200 at 23:21