Well, it looks like the PEGIDA Canada rally and counter-protest was a rather boisterous affair.

Back on September 13, we posted a message announcing a protest by anti-fascists to take place in Toronto opposing PEGIDA Canada who's organizers announced their rally would take place on September 19. Perhaps ironically, ol' walrus whiskers Sebastian Ronin also released a "press release" to announce his displeasure with PEGIDA Canada for not being fascist enough for his taste and, bizarrely, copyright infringement: 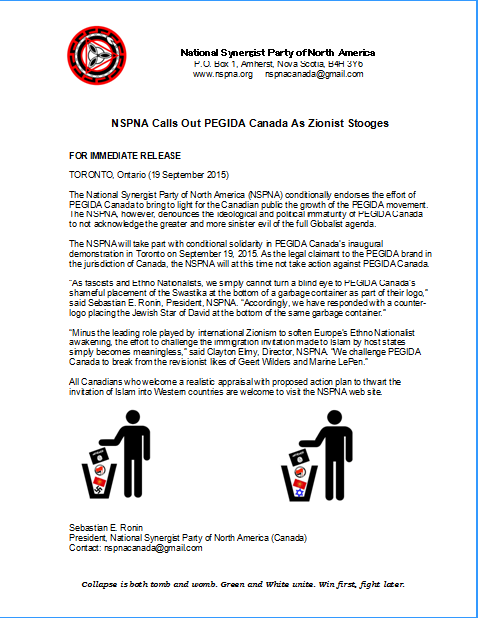 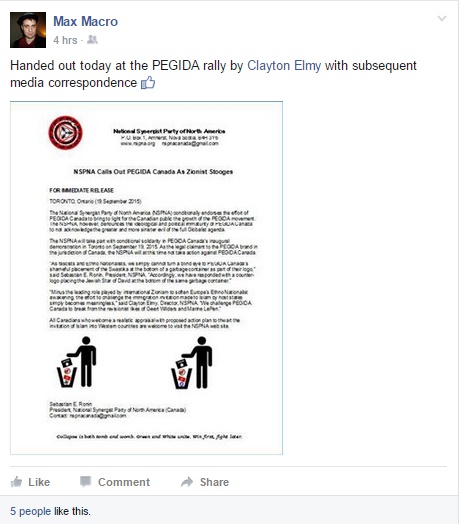 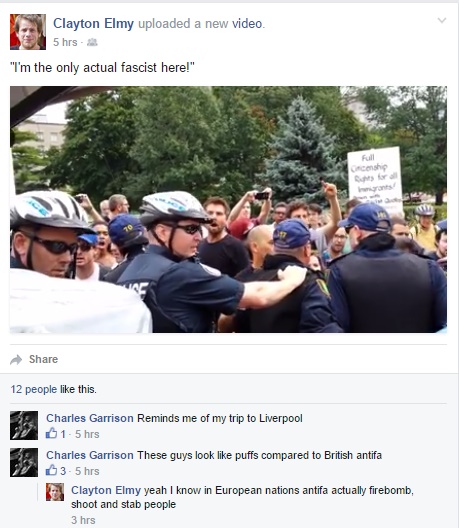 The PEGIDA Canada rally wasn't all that well attended. Perhaps two dozen members/supporters at best. By PEGIDA Canada's own estimates, there were outnumbered by roughly 200 anti-fascists vigorously opposing them.

Not surprisingly though, among the PEGIDA crowd was a familiar face: 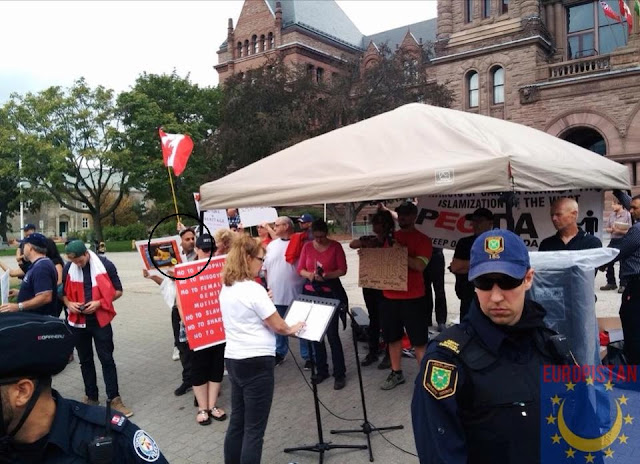 Yep, Ron Banerjee. Hey, the dude is drawn to anti-Islam like a moth to a flame. He was attending in his guise of a Rise Canada member and though he seems to have been the only member in attendance whom we could see, Banerjee tries to co-opt the rally in suggesting Rise Canada was an equal partner:

Banerjee did do us the great service of videoing the rally and counter rally. We won't play the whole thing since our readers will already be familiar with what happened based on similar protests and counter-protests; a police line separating the two sides, the anti-fascists pressing forward, posturing very loudly, and some sort of chant accompanied someone playing a drum of some sort (on a personal note, this writer can't stand drum circles at protests as it sounds like nails on chalk to her, but that is merely a personal preference). However, we would like to play some video clips in which Banerjee, who is operating the camera, is clearly speaking:


At this point it doesn't seem entirely clear what law the counter-protesters are breaking, so Banerjee's insistence that they be shot and/or beaten with batons strikes us as a case of, "free speech for me, but not for thee."

He also seems hell-bent of escalating the encounter (from a safe distance, of course) which starts to annoy even the other PEGIDA members and supporters based on what we hear in the next clip:


Yeah, when the people whom you support tell you to shut up, you might want to consider that you're the one who is the asshole.

By the way, in his guise as the head of Canadian Hindu Advocacy (another one man show), Banerjee reminds us all why he is a horrible excuse for a human being: 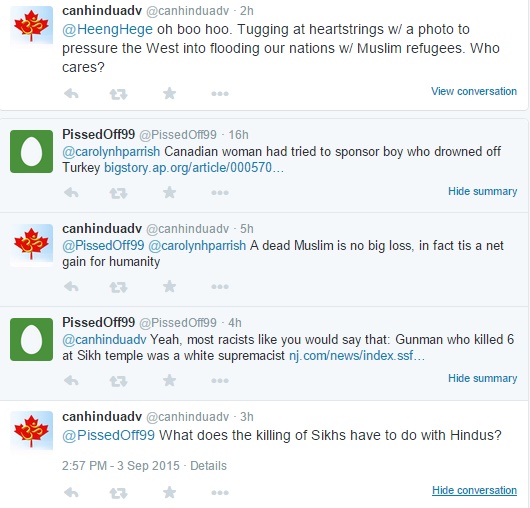 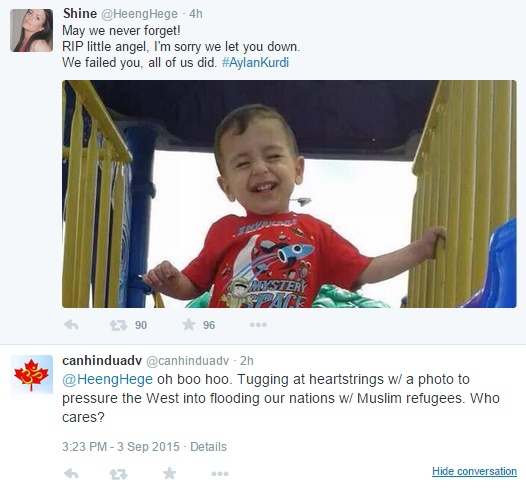 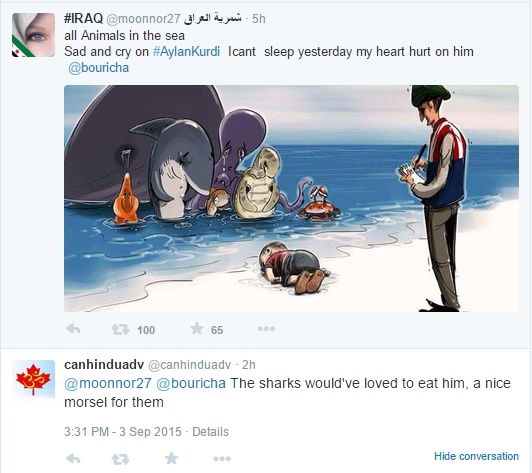 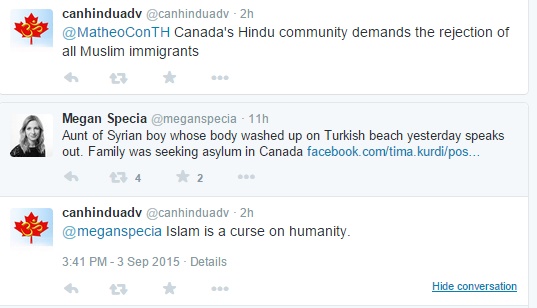 UPDATE 1: Banerjee is now claiming to be unaware of his own existence. 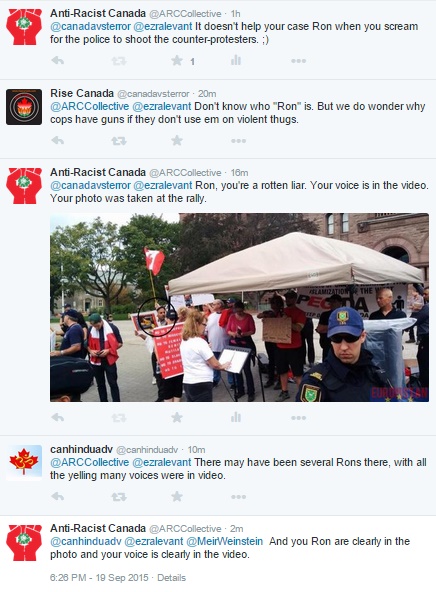 UPDATE 2: Seems that Clayton wasn't the only actual fascist at the rally: 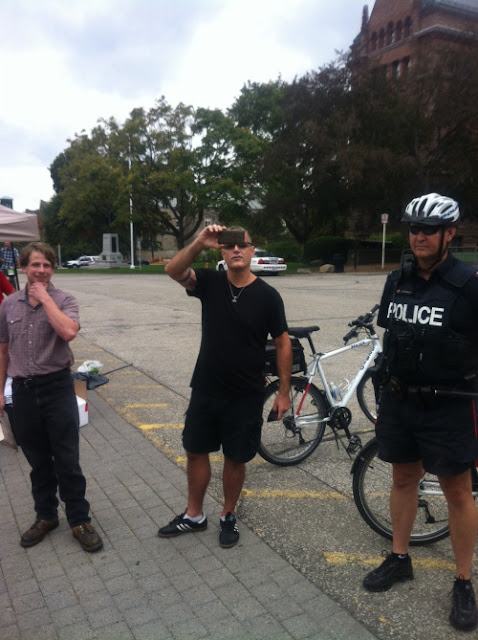 Joining them were such Toronto luminaries like Ron Banjeree, a rabid anti-Muslim homophobe most famous for physically assaulting a gay man at a municipal election rally last summer. Also there to support PEGIDA was self-proclaimed “Odinist,” failed city council candidate, and neo-nazi Christopher Brosky, who was convicted of the racist drive-by shooting and murder of a 32-year-old black man in Texas in 1993. Brosky was forced to sneak out of the rally early under police escort after being singled out for relentless verbal abuse by the anti-fascists present.
Posted by Nosferatu200 at 19:30

flintstone of antifa international has a good report on this: including a fine pic of the captured pegida banner.

I was the only fascist there when I said that on film, as Brosky had been forced to leave an hour earlier.

And it's funny, he was made to leave because his very presence whipped the crowd nearest him into a frothing frenzy. Not a badge of pride that you can be so easily provoked into having tantrums, but go ahead and wear it like one.