We always enjoy when our fans send us feedback: 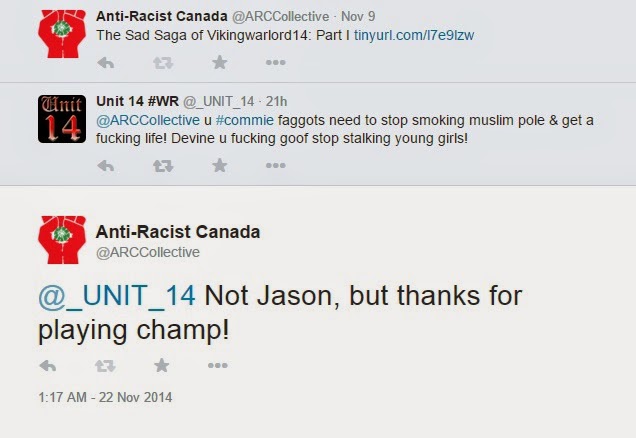 Oh you sweet talker you!

It looks like "Unit14"/"Jay Stone"/"Jay Smith"/"proudcracker420" might not have appreciated the article in which he was mentioned. We understand. In the article we dismissed him as an irrelevant carnival sideshow not worthy of anyone's time and attention.... and then proceeded to write about a loan misanthrope with delusions of grandeur living in Winnipeg who if we are to be honest isn't worth anyone's time or attention either.

That sort of cognitive dissonance  might scramble the brains of the average bonehead.

So on that note we will continue our profile of Jonathan Kotyk, a man who's name shines as brightly as such "White Nationalist" luminaries as Kevin Goudreau and Tomasz Winnicki: 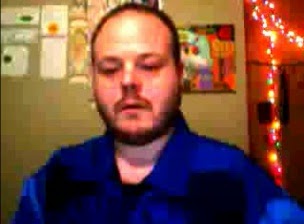 We once again introduce our readers to Jonathan "vikingwarrior14" Kotyk on Stormfront. Kotyk often attempts to present himself as a "White Nationalist" man of action, philosopher, and intellectual:

Well then! We're sure someone who advocates for the adoption of a benign dictatorship governed by a philosopher king must have some brilliant ideas on how to govern a nation-state, particularly when he suggests that he himself already has most of the solutions to Canada's "problems" (it seems to us that he might like to be considered a future candidate for the philosopher king role he advocates).

Okay Jonathan! We await your wisdom with baited breath!

Well.... that was certainly underwhelming. We continue:

Effective lying, eh? How effective is it when you post your commitment to lie online?

So if we are to summarize, Jonathan Kotyk is going to win people the the "White Nationalist" side by lying about his goals, bathroom vandalism, and engaging in public displays of anti-social behavior. This, he believes, is a formula for success.

Uhm, we didn't think we could find anything as naive as Kotyk suggesting he could get an endorsement from the pope if his make-believe political party promised to end abortion and, thus, compel all Catholics in the country to vote for him and his party. Seems we were wrong.

By the way, what else does he write about abortion?

Okay, maybe he isn't so good at political action or tactics and is incredibly naive about human nature? So perhaps Kotyk is instead a pure philosopher? A man of high concepts and ideals?

Yikes! Not a lot of deep thought yet, though we're sure if we look harder we'll find something intellectually stimulating.

Or maybe not. Still, we hope to find something worthy of Canada's future philosopher king that will be worthy of his intellectual gifts:

Hey, finally something with potentially some meat to it! Jonathan Kotyk seems to be taking a page out of the Paul Fromm school of political discourse and is styling himself as a free speech advocate:

Ah, he has even been kind enough to post a video on the topic. We can hardly wait to hear what the second coming of Voltaire has to say:

Soooo, long story short, the only reason Kotyk supports free speech is because he wants yell racial epithets at people whenever he feels like it?

Yep, that seems to be the crux of his argument.

We did receive some messages asking us why we would bother writing about Jonathan Kotyk. And they were fair questions. We suppose the best way to answer those questions would be to acknowledge that Kotyk has no hope in hell of achieving his dream of a National Socialist utopia (in his mind) that he thinks is inevitable and that he seems to believe he will be instrumental in bringing into existence. He is just a lonely, relatively isolated, loser who is angry at the world who chooses to blame others for the direction his life has gone.

It's our last sentence in the preceding paragraph however that is the reason why we decided to highlight Jonathan Kotyk. People should be aware of individuals such as Kotyk in their community. While is is not and never will be a danger to the social and political order of a relatively stable democracy, he (and people like him) does pose a danger to individuals.

So no. Jonathan Kotyk is not a leader of men. There will be no Fourth Reich emerging in Canada:

But we know that lone misanthropes like him are dangerous to the general public:

In fact we have a very long list detailing just how dangerous these people can be and have been.
Posted by Nosferatu200 at 16:44

This guy and winnicki should collaborate on a new aryan dating website which has a absolutely zero chance of fornicating with anyone who is not 100 percent pure white and it would be called "notGetting laid.com"

Koytk is a Jewish surname this guy may want to look into his background...