"Odin TheCelt": Another Name Change and Change of Tactics

It appears that our would-be nemesis "Odin TheCelt", aka "Itsoktobe White", aka "Yordi Jewkiller" has decided upon a new name for himself:

One of our readers, who makes it clear that he is not on board with us ideologically, left the following comment under a recent article commenting on the SOS:

I have to say i dont agree with anything ARC says, and think most of your info is one sided or made up and often silly. But fuck you are witty with your comments making some of these guys look retarded. Always a fun read.

Well shucks, y'all gone and made us blush!

The purpose of the article in question was to point out that the membership of the London-based SOS were.... how could we put this in as classy a way as we can?

Well, since the backhanded compliment noted our wit, perhaps the Bard himself could help us to describe the membership of the SOS?

Thou villainous abominable misleader of youth

[Thine] brain is as dry as the remainder biscuit after a voyage.

Thou art essentially a natural coward without instinct.

Would the fountain of your mind were clear again, that I might water an ass at it.

Or, if we were to put all this in slightly less pompous language, they're all about as useful as a sack of broken hammers.

Be that as it may, our article and the above comment that was left did serve to illicit a reaction from SOS founder Max Hynes, or at least someone posing as Max Hynes:

Aside from the unoriginal disparagement of our personal lives, we do note with interest the final line about intellectual property. It would appear that this is perhaps the SOS's novel way of trying to go after us now.

Back to "Odin TheCelt" now.

It looks like he didn't much care for our most recent posts about him which was in reference to his threats towards the writers of this blog. Now, instead of threatening to beat up women in dark alleys, he's going to take us down for using his pictures: 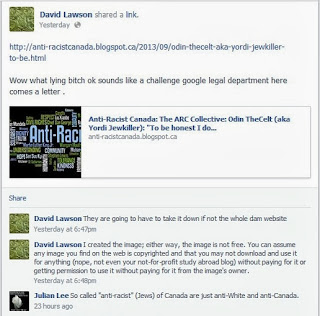 Oh no! Not a letter to Google!

So, "Odin". Or David if you now prefer. Please meet us over at camera three.

You don't think that perhaps, just perhaps, you might not be the first person to have gone down this particular dead end street?

A couple of years ago, a member of Blood & Honour in Edmonton got it in his mind that he was going to have this blog taken down. He enlisted a bunch of his bonehead friends to help him too.

The problem is that what Google considers confidential information includes the following:

Take a wild guess as to what the result's of Bernie's efforts were.

You see, while you clumsily rattle off your understanding of what is permissible, we actually do know what we are talking about. And as for images taken from your Facebook account, we have to ask if you actually bothered the read your terms of service when you signed up? You probably should have.

Now all this would be enough to make "Odin" look particularly foolish, but truly the cherry on the top is this image posted to his profile:

What we have here is a driver's license of a man named David Lawson. It has an actual address (placing it in a major intersection in London, ON and likely not the location of a real residence) and a photo of a man who we really doubt is "Odin TheCelt." Perhaps it's a real drivers license? Perhaps it was one that was generated. One thing is certain though it that this constitutes at best misrepresentation of one's identity which is a violation of Facebook's terms of service or, at worst, identity theft which is an actual crime.