National Alliance members themselves have been connected to a number of violent crimes:

The NA has attempted to attract members among United States Army personnel at Fort Bragg in Fayetteville, North Carolina. A member of the elite 82nd Airborne Division, Robert Hunt, reportedly worked as an NA recruiter while stationed at Fort Bragg. In April 1995, according to the group, Hunt rented a billboard outside the base and used it to post an NA advertisement and local phone number.
Several months later, in December 1995, a black couple was gunned down nearby in what prosecutors called a racially motivated killing. James Burmeister and Malcolm Wright, members of the 82nd Airborne, were convicted of the murders and sentenced to life in prison. Burmeister and Wright were active neo-Nazi skinheads and reportedly read National Alliance propaganda.

Another racial incident that can be linked to National Alliance propaganda occurred in April 1996, in Jackson, Mississippi. Police say Larry Wayne Shoemake piled a small arsenal of weapons into an abandoned restaurant in a predominantly black neighborhood and, from this

hideout, began shooting wildly onto the street, killing one man and injuring seven others. Shoemake ultimately took his own life as well.

In a police search of Shoemake's home, authorities found Nazi material as well as literature from the National Alliance. According to his ex-wife, Shoemake first encountered NA propaganda in the mid-1980s, when he borrowed The Turner Diaries from a friend, and he was not the same after reading Pierce's novel. "It was like an eye-opener to him," she said. Shoemake had also begun subscribing to Pierce's monthly publications.
Pierce's follow-up to the Diaries, called Hunter, has also become popular among white supremacists. It tells the story of a racist serial killer who tries to cleanse America of its "sickness" by murdering interracial couples, eventually "working his way up" to assassinating Jews.

Given this and other details, it might not be a surprise that some people, knowing what damage a neonazi group such as the National Alliance might do with such a windfall, are trying to legally prevent the transfer of the collection. 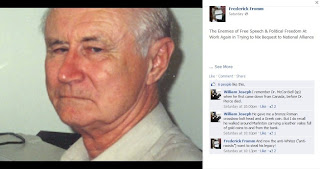 Actually, wait a moment. While we are going to comment on the rest of Paulie's soon regarding the rest of his Facebook post, this information by "William Joseph" is sort of interesting and indicates McCorkell may have been funding the National Alliance before the death of it's founder and his own death. That's perhaps new. 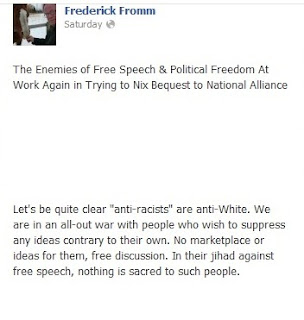 Our readers may not have realized this, but Paulie has gone all in on the mantra shtick. 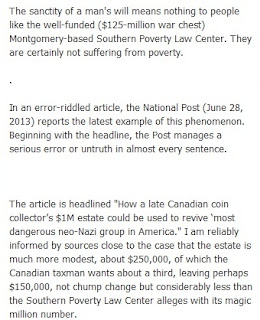 Should be fun to read about all those other "serious errors" and "untruths" though. 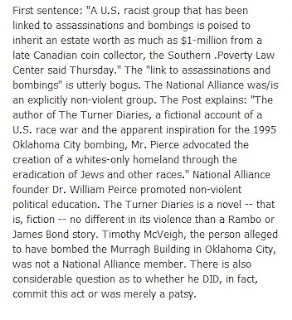 Right, because the National Alliance certainly wouldn't lie about their stance on violence, would they?

We've already posted just a few examples of the National Alliance's overt links to acts of violence. But why don't we look at some of what William Pierce himself advocated?

In a March 25, 2000 ADV speech, Pierce railed against white women who date black men, "Why should I not be able to do what is right and natural and kill those who commit such an abomination?" (The punishment and murder of interracial couples is a prominent theme in Pierce's two novels, The Turner Diaries and Hunter.) In the same speech, he directed his rage once more against the Jews: "We should be going from door to door with a list of names and slaying those who have engineered this assault on our people....And we know who the engineers are....They are, first and foremost, the media bosses and the other leaders of the Jews."


In another speech on November 11, 2000, Pierce, using Holocaust imagery, talked about "feminized, Judaized wimps," white men who are not doing their part to advance the white race: "The feminized wimps need to be removed from our government, from our media, from our educational institutions, and replaced by real white men....That'll be a tough job....I don't really care how the job is done -- whether the wimps all get machine-gunned and bulldozed into giant lime pits or whether their thinking is eventually straightened out by a program of prolonged trauma and privation."

And regarding Paulie's Oklahoma City Bombing conspiracy theory, it might help his case more had McVeigh not proudly confessed to the crime. 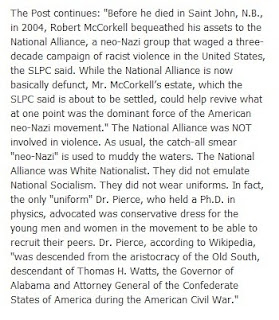 Well, actually, the National Alliance WAS and IS a neonazi organization. Pierce's racist roots can actually be found in the American Nazi Party of George Lincoln Rockwell: 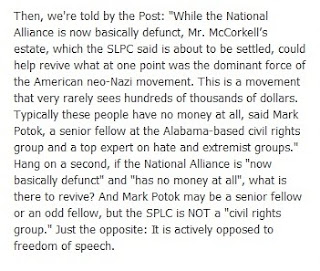 Paulie is well aware that there is still a remnant of the National Alliance and what an infusion of cash can do to help an organization. Hell, Paulie himself routinely asks for donations. How many of our bonehead readers have received this message from Paulie?

Cut and pasted. Really, do you boneheads actually think he reads what you send to him? 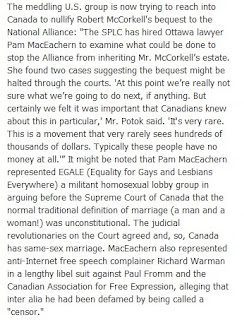 Got to say that if EGALE managed to convince the Supreme Court that the argument regarding marriage equality was sound, they don't sound like they are militant or extreme. It seems they and their attorney presented a clear and logical argument. Paulie simply didn't like the outcome.

And his second complaint about Pam MacEachern regaring the Warman lawsuit, well, we know how that turned out for Paulie. 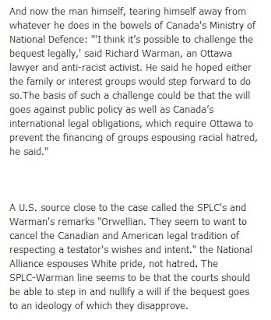 The bowels? You know, we bet the Ministry of National Defence is probably well lighted and conforms to all necessary health and safety regulations. Paulie makes it seems as if Warman works in Mount Doom, though we would suggest placing the Ministry on an island in an active volcano would be cool as hell.

Paulie wants to make it out that nullification of a will is completely unheard of. It isn't. Wills have been successfully challenged for years for less reason. 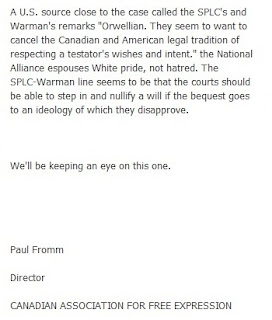 Funny. We plan on keeping an eye on things as well.