If the Aryan Guard and Paulie Hold a Protest in Calgary....

What is the use of a protest if no one pays attention?

Earlier this week, Paulie was in Calgary with McKee and whatever elements of the Aryan Guard still exist to protest in front of Jason Kenney's constituency office, as well as triumphantly announce the reorganization of the Aryan Guard:

CFIRC was helped by a strong contingent of young men and women from the White National Aryan Guard. After a year of organizational problems, the AG is reorganizing. |”The AG is back and active,” leader Kyle McKee explained.

So the AG is now the WNAG. That's certainly an acronym that we won't be able to make fun of.

Paulie and the Aryan Guard members who are currently not (a) in jail, (b) not on probation, (c) not under no contact orders, (d) actually still willing to associate their good... er.... their names with the scandal plagued gang were protesting Kenney's handling of the Tamil migrants currently on their way to Canada:

The door was abruptly locked, as an ashen face employee looked out at the protesters who chanted no slogans and were entirely peaceful. “I thought a constituency office was supposed to be open to the public,” a bemused protester observed... Twenty minutes into the protest several cruisers from the Calgary Police Service showed up. One officer inquired what the purpose of the protest was and how long it would last. Mr. Fromm indicated that he wanted to hand a letter for Mr. Kenney to the staff at his office. The officer disappeared inside the office. The door was locked. About 10 minutes later, he emerged. Apparently, Mr. Kenney’s employee would come out and accept the letter. The exchange was made under the watchful eye of the policeman. “It really shows how terrified our rulers are of the people,” Mr. Fromm observed. 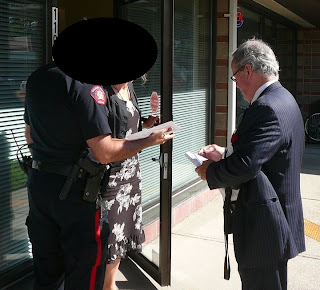 Once again, Paulie makes it appear as if a bunch of concerned Sunday school teachers came out to voice their mild concerns and were treated as pariahs for their efforts. In reality, the people who did show up to this protest made a point of being intimidating: 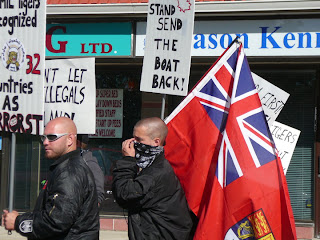 But here's the thing we find interesting. No one knew of this protest, and we only found out a few hours ago. There was nothing announcing it to the media. There was no mention of it in the mainstream media. It's as if it didn't happen, or it might as well not have happened.

The point of a protest is sort of to get your cause known through the media, otherwise you're really not much better than the crank who used to shout sexual obscenities outside the Parliament buildings in Ottawa. No one cares.

Of course they did this because they didn't want a counter protest to confront them (and why would they, since the last protest the full Aryan Guard contingent was involved with was outnumbered by a factor of 5 to 1?). As such, their efforts were wildly successful, however it was at a bit of a cost. In reality this is the closest Paulie and McKee have come to mainstream recognition, and we are hardly mainstream ourselves.

But even though the Aryan Guard has reformed, there are a few flies in the ointment. There seems to be a bit of remaining tension between McKee and his group and the much smaller, but more crazily tattooed, WEB: 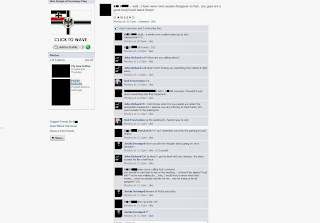 Should we start taking bets on another implosion again?
Posted by Nosferatu200 at 20:30

Im assuming the name of the 23 y.o accused is a coincidence...?

The Wack Nationalist Asses Guild is back in town? Ha! I love comedy! I wonder if they are going to launch an attack against an empty house again?

Paul Fromm once again shows what a hypocrite he is, while Kenney's constituency office hastily locks their doors, I do recall an incident when Paul was confronted by ARA Calgary where he hastily slammed and locked his door as well, but did not have the courage to reopen to accept their message. Once a coward always a coward. Never before have I seen such a rag tag bunch, you can dress 'em up but you can't take 'em out, the suit does nothing for ya Paulie, everyone still sees you for what you are, a racist gang member; desperate like a caged Rat. I remember the fear in your eyes, Paul, I was there.

Flight jackets in August? Are you kidding me?

Oh and as for Mr Fromm, he might find himself making more headway with his letter/petition if he didn't have his supporters looking like a neo-Nazi "black bloc". Seriously, he'll find most people think someone wearing a mask in public is up to no good. Which is appropriate in this case but still he might not want to advertise his malignancy so overtly. Particularly in light of how the WN all posit themselves as the antithesis of those rabble-rousing "reds". I guess they're not that proud of their WP?

Of course Paul Fromm publicly supports these losers. He's in it for the publicity so he can sell more shotty merchandise and fuck underage girls. Anyone who gives money to this fraud is far more blind than those they call their enemy.

Hahaha! I had such a good laugh with Kat's status. She might be a bonehead but that status is pretty clever!

then they dangerously moved to the intersection at the bottom of the stairs.

Ah ... that would be the same bunch I saw today protesting Tamil refugees at Bow Bottom Tr. ... about 1/2 a block from Kenney's office.

Somebody used to shout sexual things out at Parliament? Can we please get somebody to restart?