This may be considered to be a non-canon sequel to, "Cameron vs. Van Hamme: Battle of the Douchebags" as Ronny only makes a single cameo appearance.

If there is one think that has become apparent since I first began this blog in 2007 it is that the people we monitor on these pages have a spectacular inability to get along with one another. I bring to you dear readers the most recent installment of righties behaving badly.

Alex Van Hamme, the proprietor of Free Bird Media who seems to have become decidedly disenchanted with the troglodytes with whom he has become associated with over the years.

Chris Vanderweide, a troglodyte whose biggest life success ever appears to have been bashing people in the face with a helmet when they weren't looking because, you know, Chris is a real man.

Leigh Stuart who contributes to the conspiracy website Press For Truth who is probably best known for believing the conspiracy that Syrian refugees were butchering goats in the bathrooms of a Toronto Radisson and along with Ronny Cameron and then bf Georges Massaad trespassed to prove it. She's also now dating Vanderweide which calls into question her judgement because.... really?!?!

We also have "TrueHusky" who is giving off some Bryan Trottier vibes (though I admit that's only a guess on my part and I could easily be convinced othrwise) and special guest Gus Stefanis of the Canadian Nationalist Party founded by Travis Patron who is currently awaiting trail for assaulting two women in Regina.

Your's truly also makes an appearance as I sometimes like stirring the pot a bit.

We begin, as we often do, with a conspiracy theory presented as truth or perhaps truth by a credulous believer: 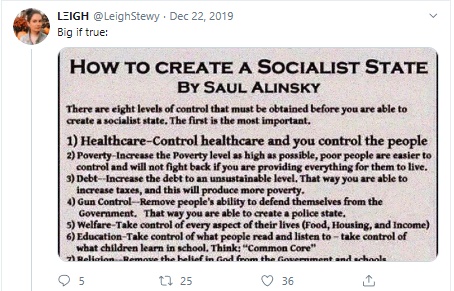 Of course it isn't true and an actual journalist would have done the requisite research before posting this but then Ms. Stuart isn't a journalist as much as she is an ineffective and somewhat incompetent propagandist. Still it is what we've come to expect from her.

What wasn't expected what Van Hamme's response would precipitate a petty argument that is ongoing as of the writing of this article when four days later Vanderweide decided to chime in:

I became aware of this slow motion train wreck when ARC was tagged: 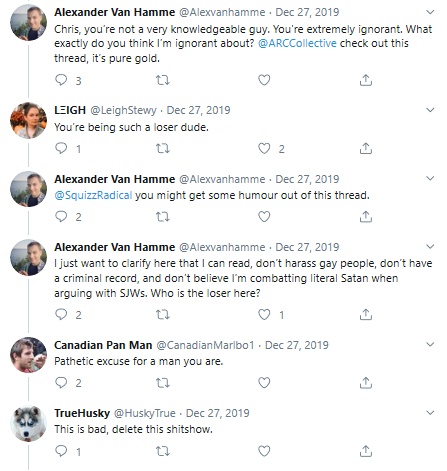 But it wasn't deleted. It went on from there and like a horrible accident I could look away.

Though we should replace "horrible" with "hilarious" and "accident" with "circular firing squad".

This and the preceding parts come primarily from the main thread of the discussion, however I will include some of the "discussion" that branched out from it later (as well as a few of those branches to help provide context for the overall narrative). Suffice it to say it is long, painful to read (the ridiculous subject matter, Chris' inability to communicate above the level of a 5 year-old, etc), and will leave you walking away muttering to yourself and shaking your head.

In other words, enjoy the show. :)

There's a chance I might have been a bit of a jerk in this next exchange. I can live with myself however:

We finally have some mention of Ronny Cameron whose own ability to alienate people is second to none. It should be noted that neither Van Hamme nor Stuart seem to like Cameron at all, and yet his toxicity infects this exchange as well.

At which point Stefanis of the neo-Nazi Canadian Nationalist Party chimes in: 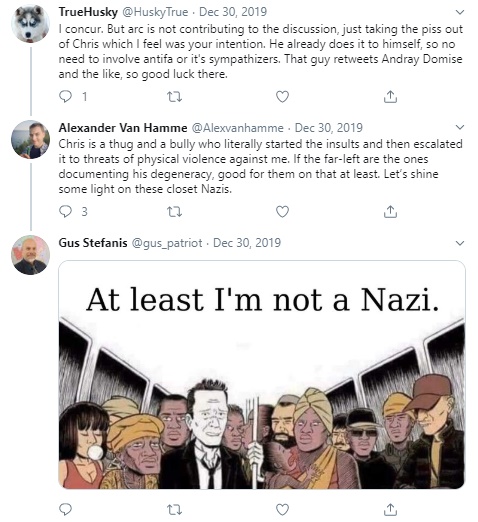 It probably isn't surprising for any of the readers to see that the whole exchange eventually results in trying to arrange a physical fight somewhere. 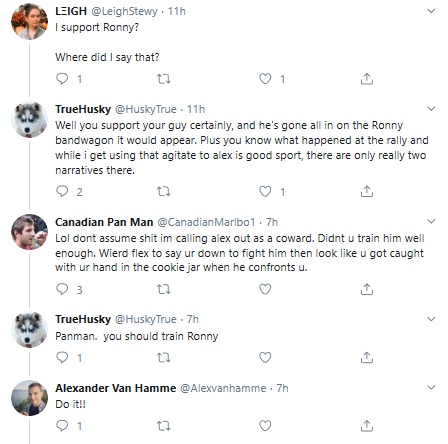 FINALLY Ronny makes his single appearance before seeing his shadow and heading back into his hole. This part refers to Cameron getting chased away from a protest supporting Don Cherry in front of the CBC where he hadn't worked for about a decade because 2019 was a hell of a year.

But back to the 12 year old posturing:

This part though is rather interesting: 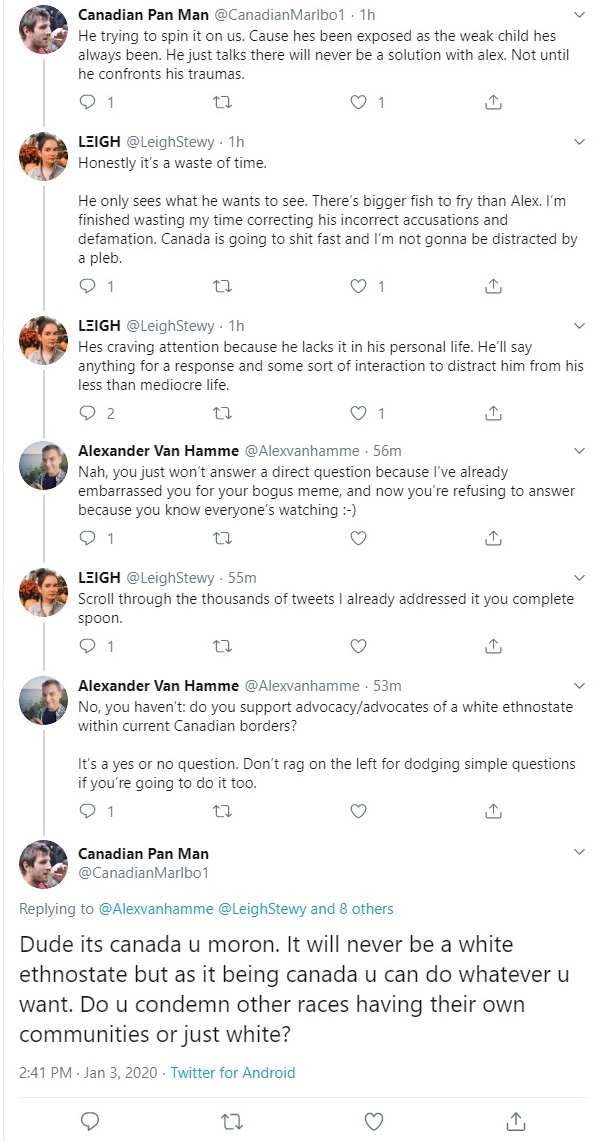 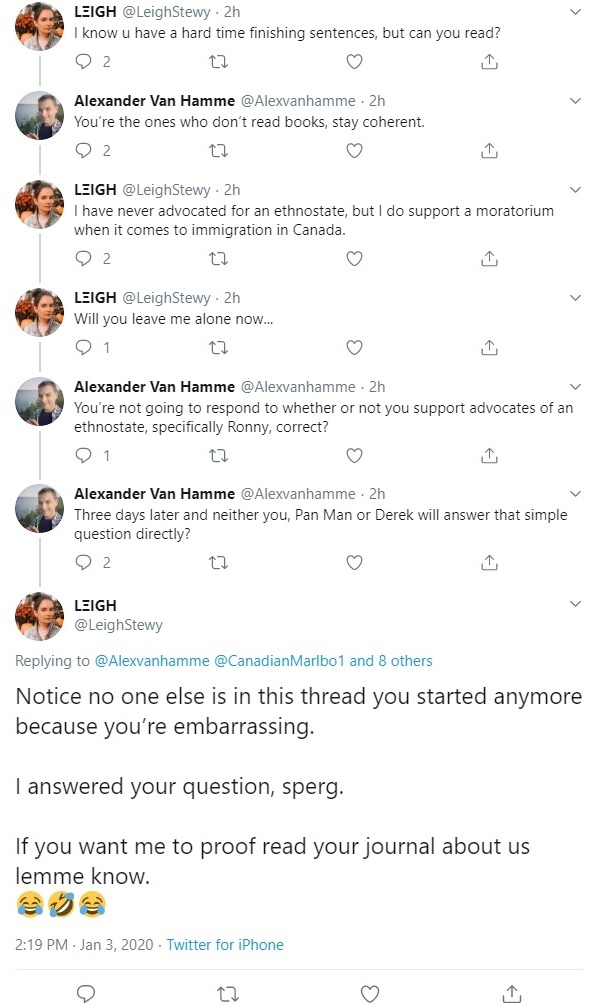 You see, we have a discussion between Stuart and Cameron (posting as Pam Cellia which is a profile he uses when his main one is suspended) which might potentially cast some doubt on her claim not to support an ethnostate: 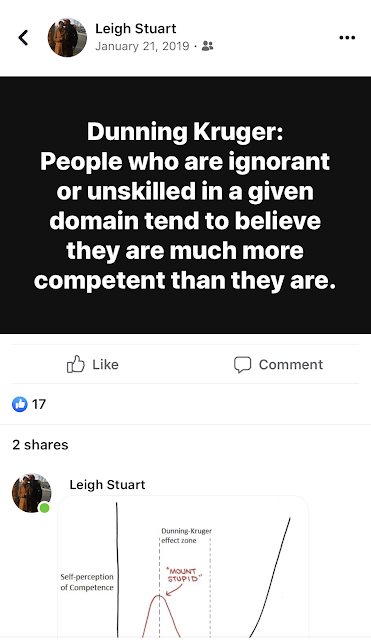 "Ronny, why would I debate you about something that I don't completely disagree with you..."

Why indeed? Might be interesting to get some clarification on this.

I've included a few of the threads that branched off the main one but I figure, what the hell!? Here are the rest of the ones I collected: 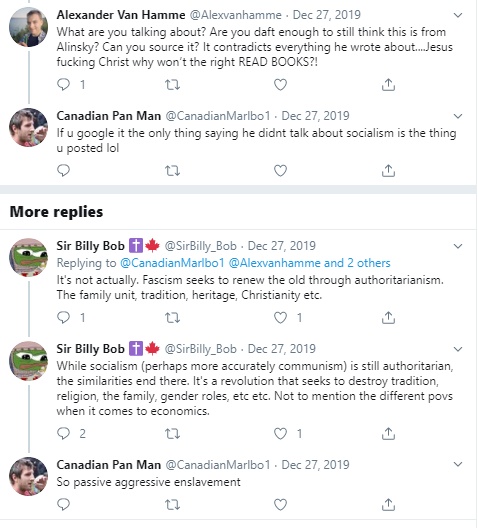 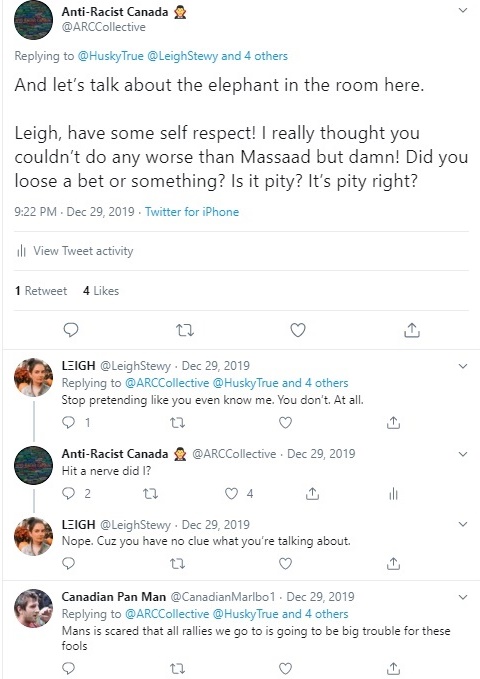 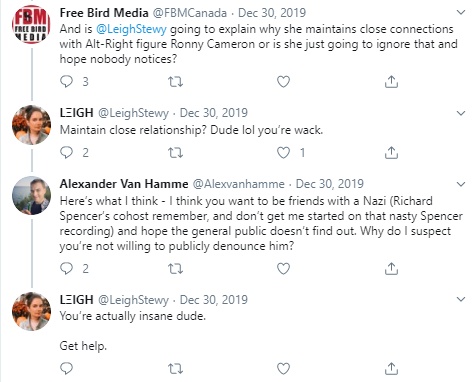 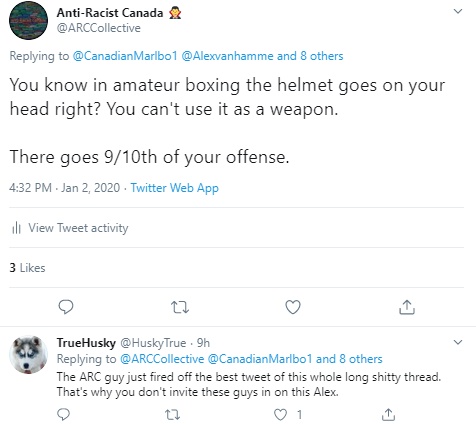 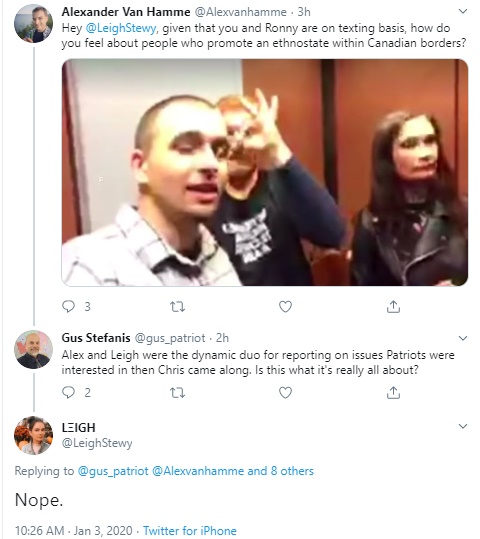 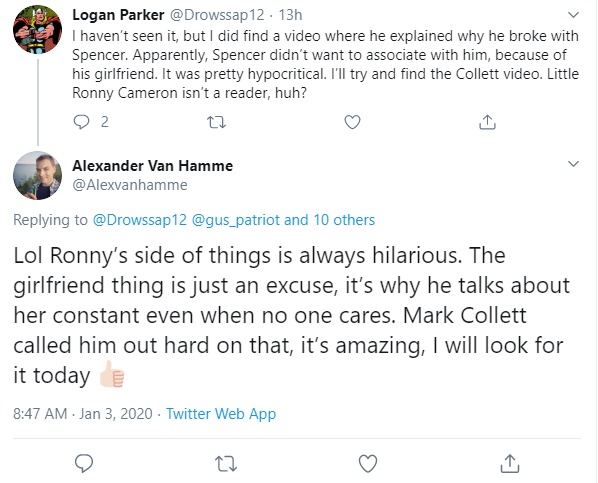 I have no doubt that this show will continue, however I think this is probably sufficient.
Posted by Nosferatu200 at 16:50