Alberta Soldiers of Odin Planned Labour Day Stunt: A Reminder Who They Are

A couple of weeks ago ARC learned that the Soldiers of Odin in Edmonton planned on holding an event near the Mustard Seed in the city on Labour Day, ostensibly to feed the homeless:

Far-right anti-immigrant group the Soldiers of Odin say they will be handing out food and water by the Mustard Seed on Labour Day because there's no services for the homeless that day. 4 blocks away @EdmLabour will be feeding hundreds of homeless https://t.co/HQI8Kf59bb
— Duncan Kinney (@duncankinney) August 24, 2018


Of course it must be noted that the Mustard Seed, a faith-based organization that serves a diverse population which isn't limited to white Christians, wants nothing to do with this group and that another organization has been serving Edmonton's homeless population on Labour Day for nearly 30 years without fanfare:

update--checked with them--Mustard Seed isn't officially involved with this. in fact the Mustard Seed won't even be open at noon on this day. Soldiers of Odin are just using them as a prop
— Jim Storrie (@JimStorrie) August 23, 2018


Far right group the Soldiers of Odin are doing their homeless outreach schtick the same day and time as @EdmLabour  has been feeding unhoused and underemployed people for 29 years. https://t.co/jck2laPEYg
— Progress Alberta (@ProgressAlberta) August 24, 2018


The SoO don't plan on coming alone, as two other far-right groups have been listed as participating: 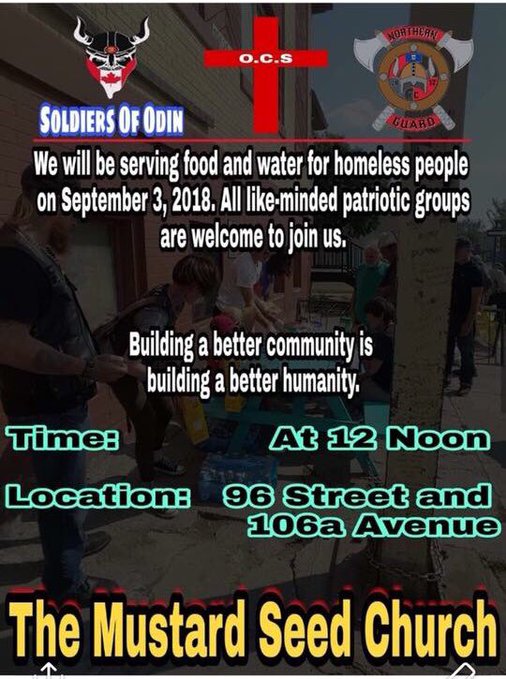 A church in Edmonton’s inner city says it has nothing to do with a plan by far-right groups to distribute food and water to homeless people near its premises.
In social media posts, members of Soldiers of Odin, Onward Christian Soldiers and Northern Guard said they plan to serve food and water to the homeless on Sept. 3.

All three hate groups were also involved in the Worldwide Coalition Against Islam fundraiser for the rally Joey Deluca had been planning for Toronto but which was ultimately cancelled and those involved in the scheme humiliated:

Should this particular stunt proceed it won't be the first time hate groups have tried to improve their public image and it will certainly not be the last. However given that the Alberta SoO is involved, I thought that ARC should remind our readers about the leader of the Calgary chapter and who is believed to be participating in the Edmonton stunt: 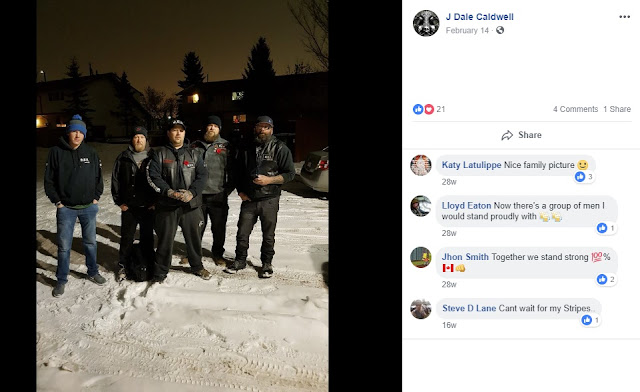 ARC wrote a lengthy article about Caldwell this past April. In that article ARC exposed his racism and antisemitism: 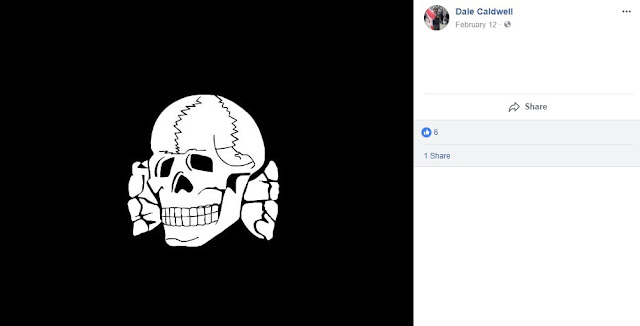 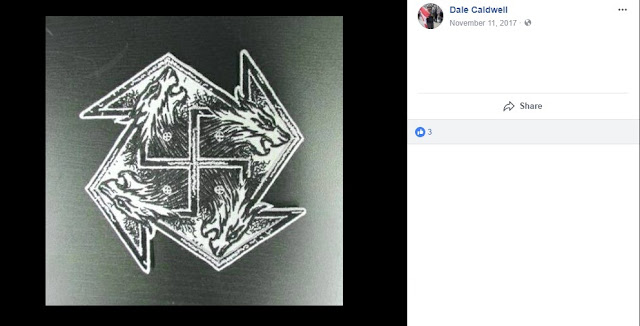 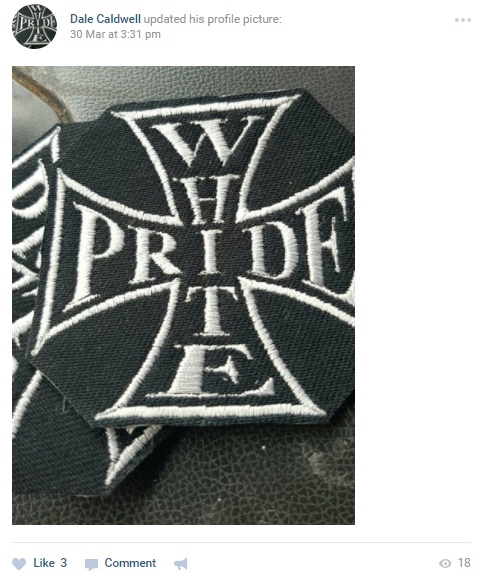 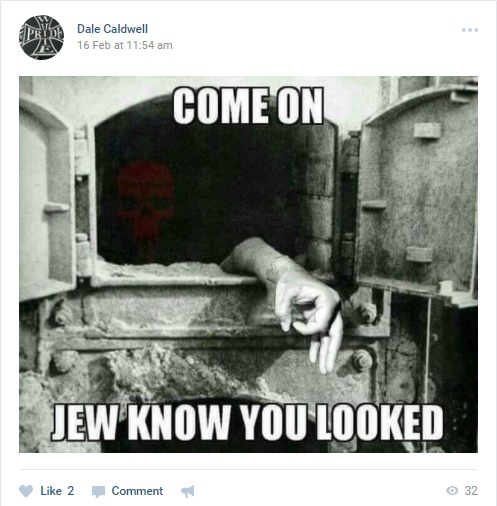 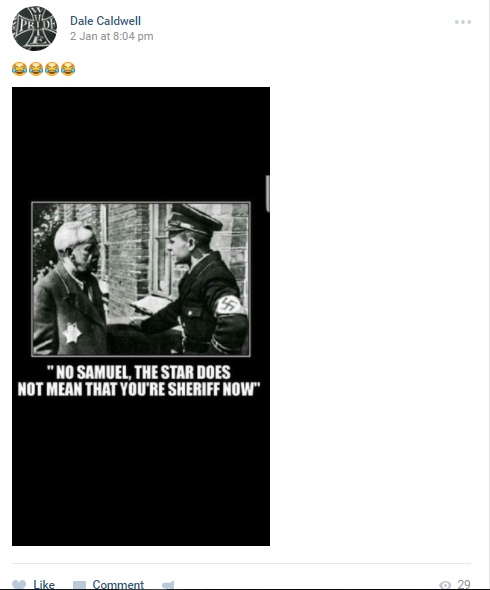 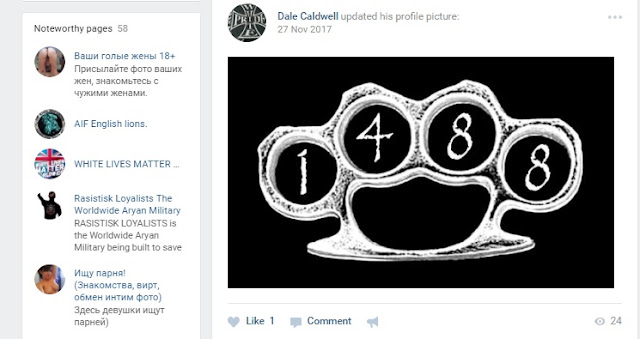 ARC could also highlight his connection to hate groups such as the WCAI, Canadian Nationalist Front (Goudreau's project), Blood & Honour, the III% militia, and other groups: 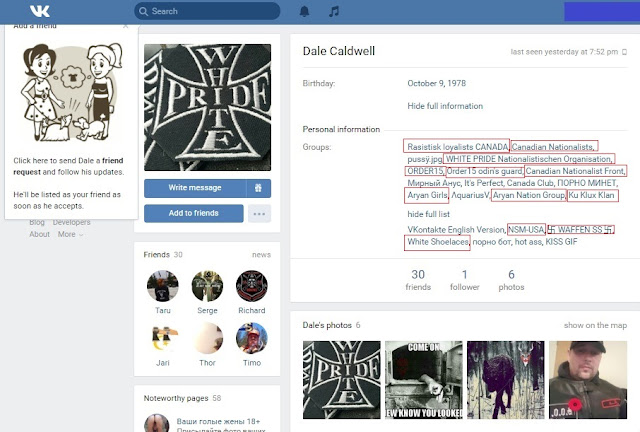 Call me a cynic, but I have a difficult time trusting in the altruism of the Soldiers of Odin given all of this.
Posted by Nosferatu200 at 19:08

Good stuff ARC. Thank you very much for the work you are doing.