I have to admit to the readers of this blog that I have derived from Twitter what might be considered somewhat of a perverse joy concerning this particular feature: 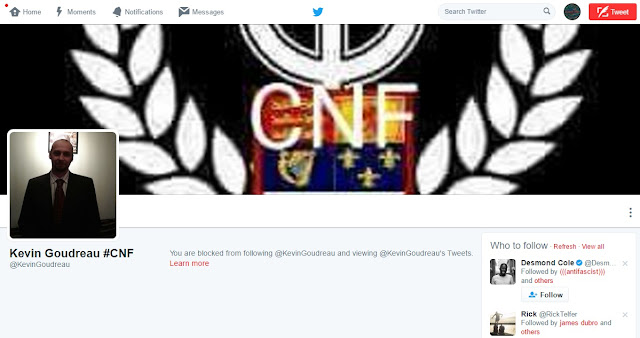 Yes, ARC has been blocked by Kevin "The Chairman" Goudreau. This occurred a few years ago after Goudreau realized that we were getting screen shots from his account and we were making fun of him and his obviously fake followers. At the time we guessed we hurt his feelings since he has continued to sporadically threaten to have the members of ARC killed.

Goudreau wasn't the last to block us. Connie Fournier blocked us for a time before unblocking us to send a message to relay to Richard Warman whom she believed we had contact with in some way (because reasons). And we were also blocked by this handsome fella a little over a year ago after sending a few tweets in his direction: 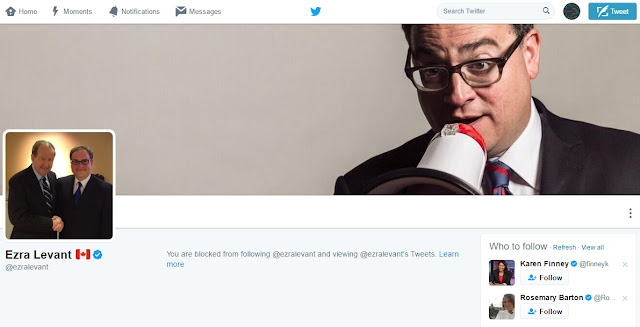 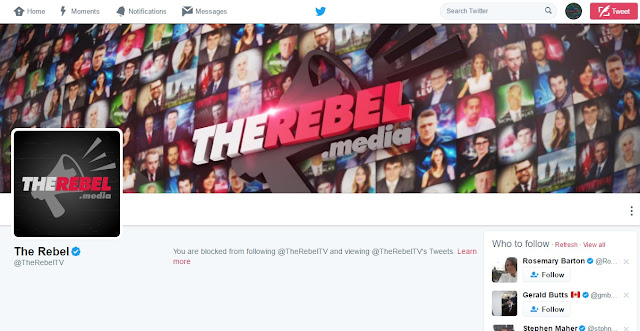 There's actually sort of a club on Twitter of people Ezra has blocked without having engaged in any actual two-way exchange. That's certainly his right, though the practice does call into question Ezra's claims to be a courageous crusader for free speech.

Oh, we don't mean that he's denying us free speech by not allowing us to read or comment on his Twitter page. No, we totally mean the "courageous" part since he seems really frightened by being challenged with alternative viewpoints.

In any case, we can announce that as of today, we've been blocked by another individual of.... er.... courage. One might even say that this person is a very proud boy:

Surely this prime example of a man's man wouldn't be so much of a "pussy" as to block lil' old me, would he? 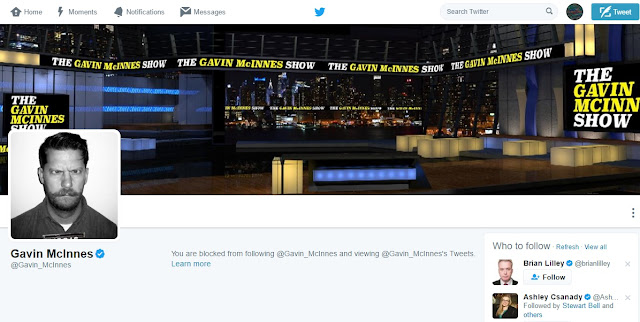 Oh Gavin! My heart breaks! Whatever did I do to deserve your scorn? 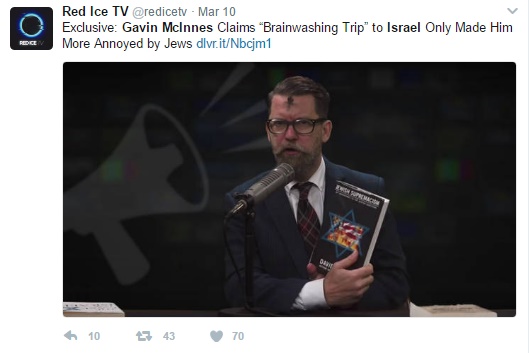 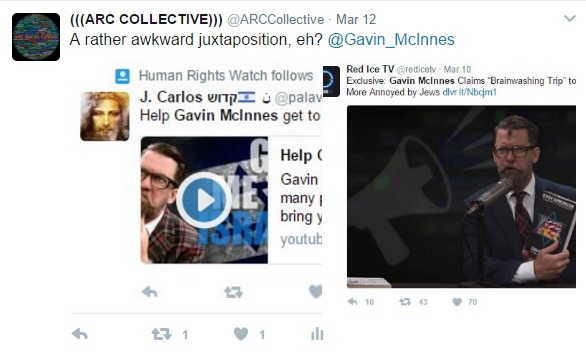 All those things I wrote about him earlier in the week.


I think it would be accurate to suggest that this hasn't been a great week for McInnes, Ezra, or The Rebel crew despite their efforts to spin and deflect: 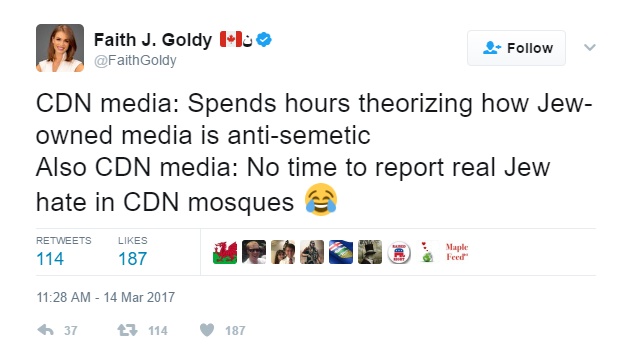 Really Ms. Goldy? You're really going to try to help Gavin by invoking the "Jew-run media" canard as a defense? 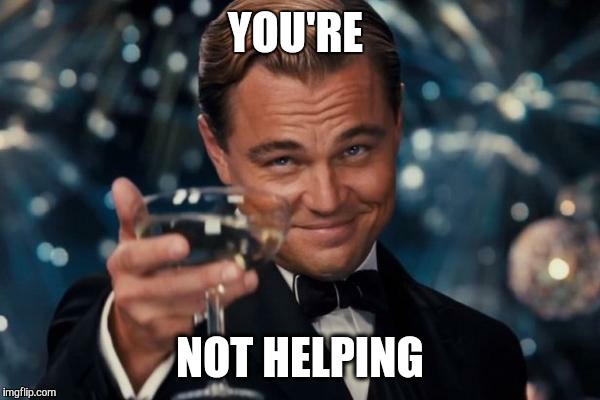 And if anyone thought that Ezra was going to criticize McInnes, well, you don't know Ezra:

The preceding link deals the damage control from The Rebel who put out another video which was intended to be satirical and, thus, implying the video featuring McInnes' claiming the trip to Israel "made him antisemitic" by what he characterizes as not getting over the whole Holocaust thing was also satirical in nature:

In the video, McInnes complains about what he describes as bad food and poor driving – “You drive worse than Chinese women,” he said. He calls Hebrew “spit talk” and said the “whole language is clearing your throat,” before getting to what he calls “the constant kvetching” from Israelis about historical persecution of Jews.

“There’s this overall sort of whiny, paranoid fear of Nazis that is making them scared of Christians and Trump, who are their greatest allies,” McInnes said in the video.

He complains that Jews aren’t thankful enough for the role of Americans in defeating Nazi Germany. “America saved the day, the Western world saved the day, had your back, liberated you. Sorry we didn’t do it in time, but we still saved you,” McInnes said in the video. “It’s like a black guy going ‘Yeah, white people did slavery.’ Well, they didn’t start it, but they ended it. So maybe be a little more positive about it?"....The title of the video has been changed on the Rebel’s website to “10 Things I Hate About Israel,” but the content of the video is the same. In an email, Rebel Media founder Ezra Levant said that he decided to change the title: “I thought ‘Jews’ was more provocative, but ‘Israel’ was more descriptive,” Levant said.

Yeah.... and as Amanda Marcotte of "Salon" notes:

The new video is cleverly constructed, if the goal is simultaneously to appeal to anti-Semites while creating enough plausible deniability to fend off the anger of anti-anti-Semites. McInnes starts off with innocuous comedy-style complaints about Israel and Israelis — he didn’t like the food and the waiters were rude — creating the impression that this is all just politically incorrect fun and not real bigotry.

But at a point after most ordinary and sensible people will click off the video, McInnes starts complaining that Israeli Jews have “whiny paranoid fears of Nazis,” which he believes is the reason they won’t support Trump. The tightrope act is also evident in the title of the video, which was originally called “10 Things I Hate About Jews.” McInnes’ tweet, which he briefly pinned, was even more aggressive in its rhetoric. 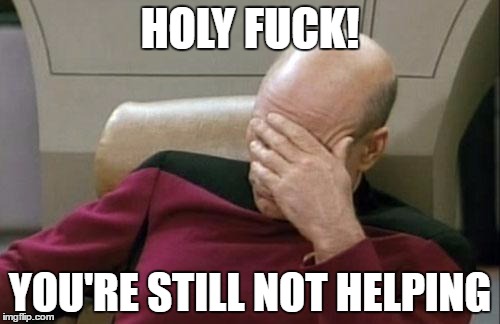 If that weren't all bad enough, this happened:


On last Thursday’s edition of The Gavin McInnes Show — the guy’s other gig, whose daily episodes are kept behind Compound Media’s paywall — the Vice co-founder sat down with Rebel colleagues Faith Goldy and Sheila Gunn Reid in a hotel-like room at a kibbutz near the Golan Heights. Accompanying them were four bottles of wine, three of which had been emptied prior to cameras rolling.

The first half of the 56-minute video consists of McInnes pushing a deeply uncomfortable Goldy to talk about her personal life and why at 27 — and in spite of her firm belief in “breeding” for the sake of “the West” — she has yet to have any children. In particular, he’d like to know why her boyfriend has yet to propose to her after five years — to which a mortified Goldy, on the verge of tears, can only offer that “feminism is cancer.”

But the second half is politics talk, with McInnes repeatedly steering the conversation back to the pressing topic of why he doesn’t like Jews. At one point, Gunn Reid suggests, “Can we talk about the settlements for a second?” and they seem relieved to move on to something less controversial.

Click on the link to read Jonathan Goldsbie's transcript which is just as bad as the video that started the whole mess.

Is it just me, or am I the only one who can envision Sheila Gunn Reid as being a person who would find herself in a position where she needed to defend herself by invoking the phrase, "but some of my best friends are black"?

And at least Ms. Goldy didn't use the term "Jew media" again.

Leave that the McInnes:

McInnes also looks like he's going on the offensive as well:

The article that has so offended Gavin's very delicate sensibilities was written by Amanda Marcotte whom we've mentioned earlier in the article:

McInnes’ media personality involves a stance of “political incorrectness,” and he mostly spends his time titillating his audience by using racial slurs and pushing a pseudo-edgy misogyny, a shtick that got him a spot as a Fox News contributor for several years as well as gigs hosting various video series and podcasts. But he has managed to keep one foot in more mainstream conservatism by avoiding the the overtly Nazi-style tropes of overt racism and anti-Semitism that have come to define the alt-right.

Until recently, that is. On March 11 a video was posted of McInnes coughing up a really elaborate apology for Holocaust denial and anti-Semitism. The social-media kerfuffle over this was enough to cause McInnes to do something he rarely does: backtrack, sort of.
....
The bizarre is-he-or-isn’t-he behavior by McInnes is a predictable result of the rapidly shifting market pressures in right-wing media in the age of Trump, as Angelo Carusone, president of Media Matters saw it. People like McInnes have built their brand on provocation and “political incorrectness,” but they also “know there’s some hard lines in business still,” Carusone said. “And it’s really hard to scale, in the way [McInnes] knows is possible, if you have that baggage associated with you.”

It’s apparently one thing to denounce women’s suffrage, claim that domestic violence is a lie or imply that Neil deGrasse Tyson, who is black, can’t really be an astrophysicist, as McInnes has done. But sticking a toe into the deep waters of Holocaust denial is a bit too much for someone who wants to occupy the incendiary-but-still-mainstream-conservative space that McInnes has lodged himself into.

The problem for McInnes and similar right-wing firebrands, however, is that their brand of pseudo-edgy provocation is looking a bit quaint compared to the openly white supremacist, Pepe the Frog-loving alt-right crowd that has emerged online. McInnes has “been immersed in the alt-right milieu for a while, though he’s often been dismissed by the Nazi-er types as ‘alt lite,'” David Futrelle, who runs a site dedicated to tracking hate speech online, explained over email.


McInnes may have also hurt The Rebel's efforts to influence the direction of the Conservative Party:
You know, I've been critical of Levant, McInnes, and others on the "alt-right" using the term "lügenpresse" but if I'm to be totally honest I understand why some people enjoy German words. My favorite word happens to be German as well.