It's been a while since we last wrote about the Soldiers of Odin. Since our last post about the group they have garnered a significant amount of media attention, though they aren't especially pleased with how the Canadian branch of the SoO has been characterized.

For example, in a Global News article from September 19, SoO National President Joel Angott made the following comment:


Soldiers of Odin Canada claims it’s independent and denies any links to neo-Nazi groups and biker gangs. On his Facebook page, Soldiers of Odin national president Joel Angott said “it is our hope that in time citizens of all races and religions come to see the peaceful nature of our activities.”

Angott suggests that the SoO doesn't have links to either neo-Nazi groups or biker gangs. We will test both of those claims but for now we're going to focus on the denial of links to biker gangs in this article. For example, one link is that the SoO chose to copy the bylaws of biker groups, modifying it (slightly) to fit their particular situation: 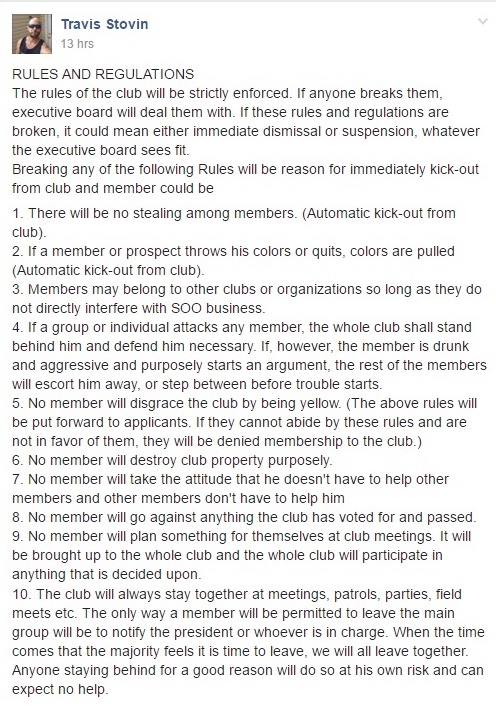 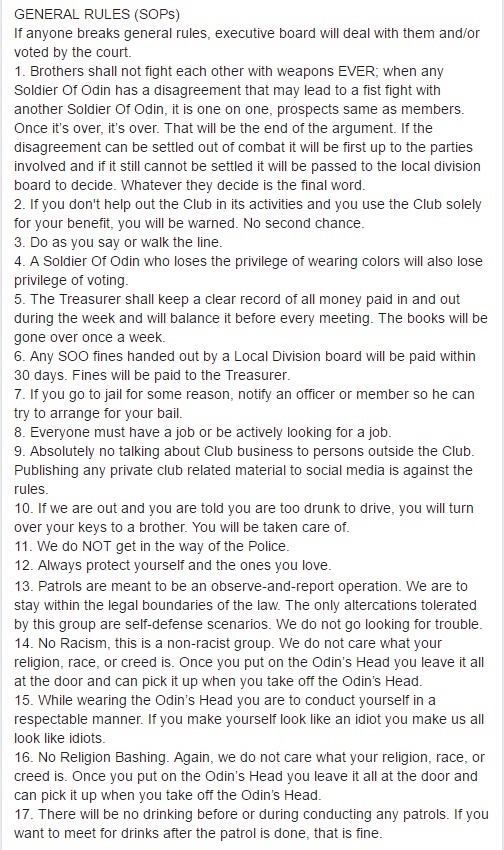 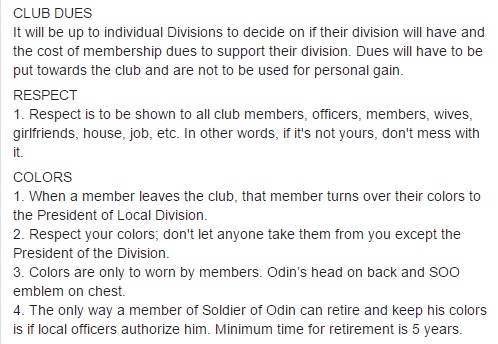 However our readers might want a little more red meat than this.

While we could simply point to an article we published on May 15 outlining the links to SOO members and the Hell's Angels which, if we aren't mistaken, would be classified as a "biker gang." However we decided that more recent information might be appropriate.

In our May 15 article, we mentioned that then Sargent-at-Arms of the Ontario Chapter (and now FORMER president of the Ontario Chapter.... more on that in a future article) Arran Taylor wrote about the importance of respecting "club gear." In this case the club in question was the Hell's Angels: 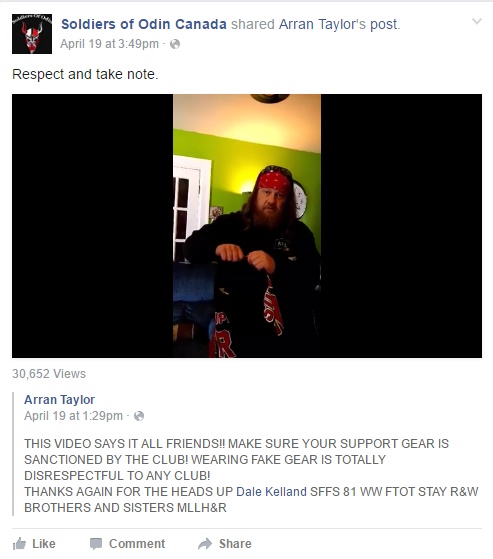 The individual who gave Taylor the heads up was a fella by the name of Dale Kelland: 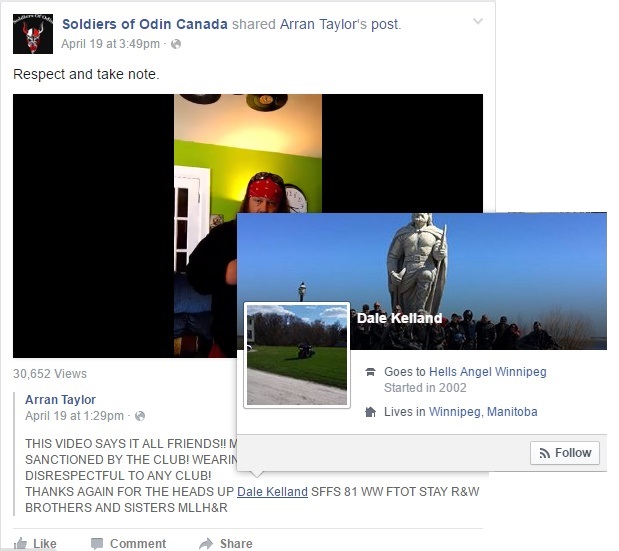 A few months later when checking out the membership list of various SoO chapters across Canada, we stumbled across Mr. Kelland again in the Ontario Chapter of the Soldiers of Odin:

We also know, based on one of Kelland's Facebook banners as well as his Instagram account, that he was among the folks who's photo was taken at Gimli which has been used by Soldiers of Odin Canada as part of their self promotion:

The photo can also be seen at 2:20 in a SoO produced video.

So, when Joel Angott rides with a member of the Hell's Angels, can it really be said there are no links between the SoO and biker gangs? 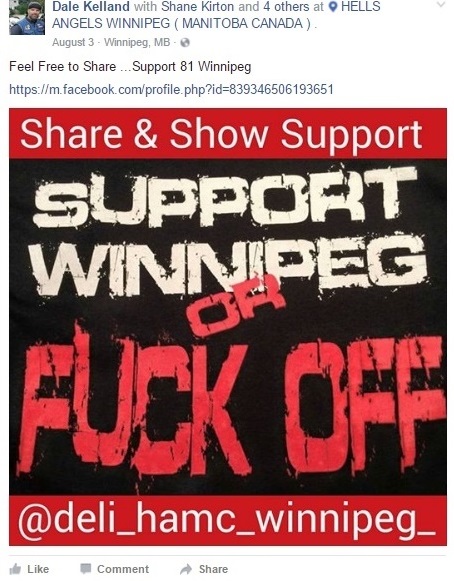 But then Dale Kelland isn't simply an ordinary member of the Hell's Angels either.

The nickname "Deli" jumped out at us. In the distant recesses of one of our member's mind, the name seemed familiar.

Then that member remembered. Dale Kelland used to go by a different name:

Dale Kelland was once known as Dale Donovan.

And as Dale "Deli" Donovan, he was the president of the Manitoba Chapter of the Hell's Angels with a bit of baggage: 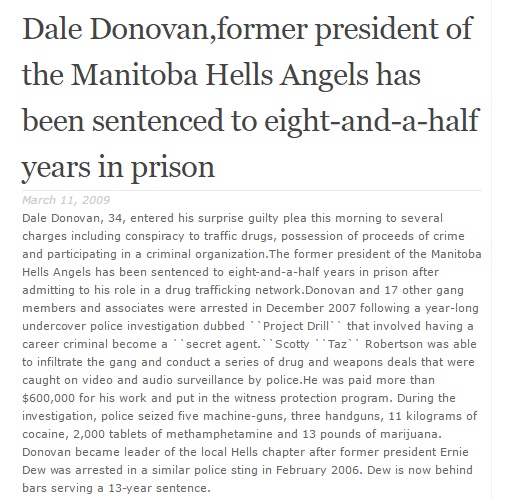 Perhaps not surprisingly, Mr. Kelland is rather conflicted about his time as a guest in Her Majesty's penal system: 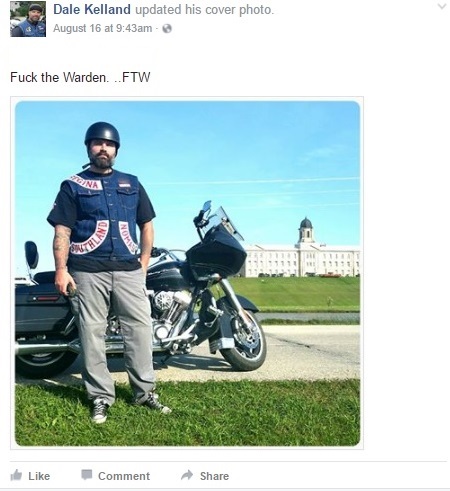 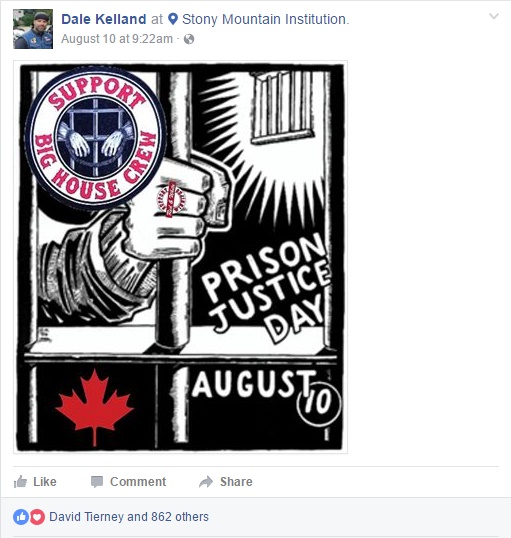 Okay, maybe conflicted isn't the correct word to use.
Posted by Nosferatu200 at 23:14

By any reasonable standard one of the two Canadian experts on organized crime (including “motorcycle clubs”) is James Dubro, a white homosexualist male with sources and connections you wouldn’t believe. He is easily contacted on the Facebook and otherwise. James can and will fill you in on everything he knows about gangs and the Soldiers of Odin, which (sight unseen) I assume to be a great deal.