Well golly gee, that's certainly magnanimous. Ruhe is willing to pardon Jews for their collective imagined crimes so long as they consent to permanent supervision.

Hey, perhaps some identifying badge will help keep tabs on the Jews too? What could possibly go wrong with that?


Finally, Ruhe decides since he was the one who declared a general amnesty for the Jewish people, that he should be their king.


We first became aware of Ruhe back during the Spring when we learned Paulie had spoken to a group Ruhe is associated with and when Ruhe started advocating for Arthur Topham. His admiration of Hitler and National Socialism went back at least three years however 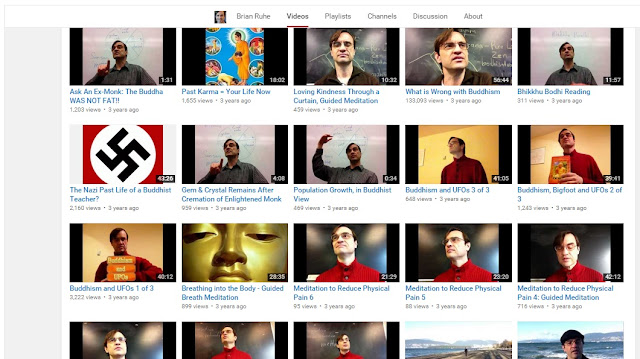 By the time we really started digging into who this guy was, Ruhe had already become a routine stop in Paulie's trips across Canada which leads us to suspect there must be some sort of financial incentive for Paulie.

When Paulie was banned from entering the United States, Ruhe was among the first people he was interviewed by. And when Ruhe's contract wasn't renewed, Paulie interviewed him about his plight.

We would liken this to a "White Nationalist" circle jerk, but that would be crude and beneath our collective dignity:


Again, both Paulie and Ruhe prove that what they want isn't necessarily free speech, but consequence free speech. Ruhe was able to say crazy shit, but the college wasn't obliged to continue to contract him and an employee. And now he is whining about Harry Abrams for, "attacking him" by letting Capilano University know more about their contract employee.

With this in mind we've been in contact with Harry and asked for his take on Brian Ruhe. He sent us the following:

Here we have a fellow whom at first glance presents as well-meaning and non-violent - because Buddhism and meditation are in every other instance I have seen 180 degrees different than this Hitler fetish[ist]. Hitler and Nazi fascism were not just evil to the max & violent, but violent on a vast industrial scale and bureaucratized like nothing else before it in recorded history. It took the concerted efforts and blood of many, and literally on a global scale to confront and defeat it.

And because this is not an immediate police bust, he potentially attracts emulation. But it's important. to show that [Ruhe], like Fromm and all of these other supposed "leaders" need to be socially and economically marginalized for moral turpitude and misconduct, even if it didn't happen right in the workplace. That's just as important as disciplining miscreant teachers for sexual, psychological or physical abuse in my view. Obviously teachers like everyone else deserve peaceful private lives, and it should take a real ugly exception to deserve action.

Over the past year, Ruhe has immersed himself in the subculture of "White Nationalism" with Paulie becoming among his primary contacts. Last weekend (around September 26 or 27) in reference to the Topham case, Ruhe provided a forum to speak about the discredited Protocols of the Learned Elders of Zion. Topham is evidently going to be using this plagiarized document, calling David Duke as a witness, to argue the "truth" of his accusations. Paulie discussed this back in April while in London, UK and says essentially the exact thing as he did at that time:


Honestly, consider how definitively the hoax has been discredited, and considering David Duke's less than savoury reputation, we aren't sure that things would go as well as Topham, Paulie, or (perhaps) Ruhe think they would go.

One final related note. During the same meeting in which Paulie talks about The Protocols, he also refers to a future event hosted by Ruhe in November:


Considering the scandal resulting from the photos that were leaked late last year as well as the displeasure of some notorious boneheads down south that Paulie would even have a friendship with this woman (never mind the rumor that they are something more).... 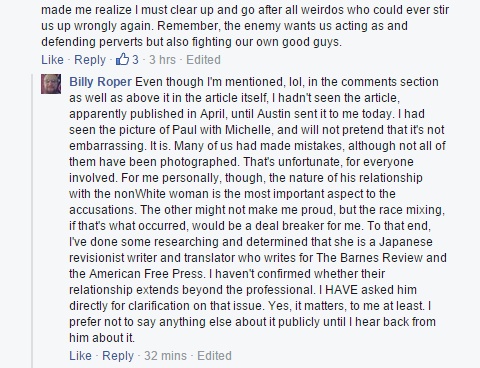 .... we continue to wonder if Paulie's time as a significant player in North America's "White Nationalist" movement may very well be waning.

UPDATE: Mr. Abrams contacted us with the following clarification:

I wasn't in touch with Capilano College. That was a Vancouver-based Lama Tsewang.

I was in touch with the Vancouver Parks Board for whom Brian taught in four downtown Vancouver community centres. Now past tense. I'm quite sure that mine was not the only complaint, though.
Posted by Nosferatu200 at 18:51

I got a chuckle reading about myself in this article.
-Brian Ruhe

So did our regulars. They think you are quite inadvertently hilarious.