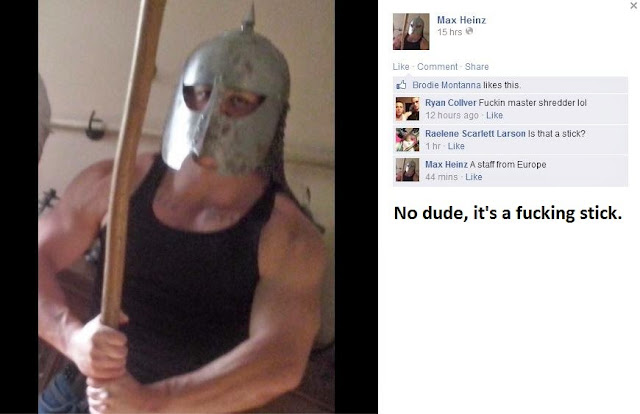 Because the Southern Ontario Skinheads give us so much material, we decided that, "A Cast of Stooges" will be a regular feature here on the blog. But before we begin with the actual SOS members, we thought we would start with a prospective member:

my name is jeremy crawford when u here the name u say skinhead thats feared and well respected im friends with brodie walsh anyways i lead small skinhead groups in london and sarnia ive been through thick and thin being a skinhead but i always come out on top because were more intelligent than the others i want in im 32 and i want in i want a group to call my family that i can trust with my life im 220 pds and covered in white power tattooes covered. im the poster child for skinheads im purebred german blonde hair blue eyes etc please get back to me. WPWW

Now, you might be wondering by what black magic we managed to obtain this, for lack of a better term, "application" to the Southern Ontario Skinheads. We wish we could tell you that it was as a result of hard investigative work and an inside mole feeding us information, but the reality is, Mr. Crawford left it as a comment on our blog. Honestly, it is still surprising how often this happens; a semi-literate bonehead is unable to understand the "anti" part of "Anti-Racist" and sends us queries as to how to join a particular hate group. Really, it is the lowest of the low hanging fruits, though we still really enjoy the irony found in this part:

To be absolutely clear that he wants to be a member, he sent a second message five minutes later:

Jeremy Crawford 32 220 pds pure german and life long skinhead i want in i have ran little clicks and iam well respected i want in the southren ont skins get back to me at ************@hotmail.com or ************@gmail.com get ahold of me please i would be an incredible asset to the group and i know brodie walsh

Now we debated whether or not we should publish this message since we really don't want to add anyone to their numbers, especially when they are such an, "asset." But we figure that if they want someone as blisteringly stupid as Jeremy Crawford in their ranks, they really do deserve him. Besides, given the current membership, he really does fit in quite nicely:
Now, since his name was brought up, why don't we now move on to Brodie Walsh? He too has decided to start leaving messages on the blog, though he at least knows what "anti-racist" means, though does seem to think we value what he thinks about us:

Brodie is lashing out angrily, and we understand why. The lad is very confused and really doesn't seem to know who he is and what he believes. At this moment, he suggests he is a White Nationalist.... 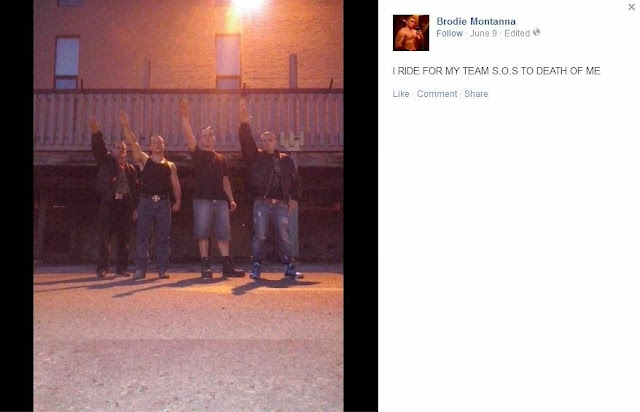 .... but not too long ago, he seemed to have taken a bit of a shine to biker culture: 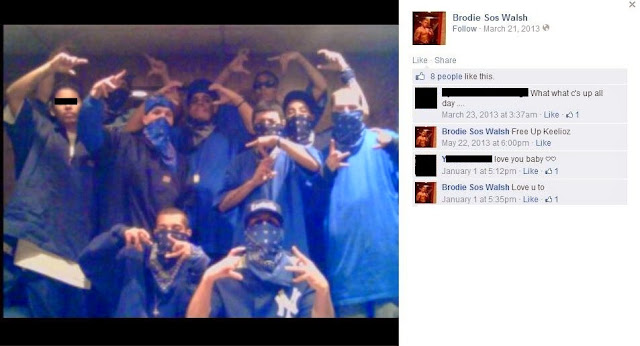 It should now be noted that "Y" in the screen shot above appears to be Brodie's ex-girlfriend. At least we assume she's an ex, since she presents a little bit of a problem for the newly "White Nationalist" Brodie Walsh. You see, unlike Max here whom Walsh now is hanging with....


.... he also seems to still be associating with people who, like his ex-girlfriend are.... oh, how should we put it?


Perhaps not surprisingly, some of Walsh's old friends have expressed some significant misgivings regarding his embrace of "White Nationalism" but thankfully his new friend Max Hynes is there to tactfully put their minds at ease: 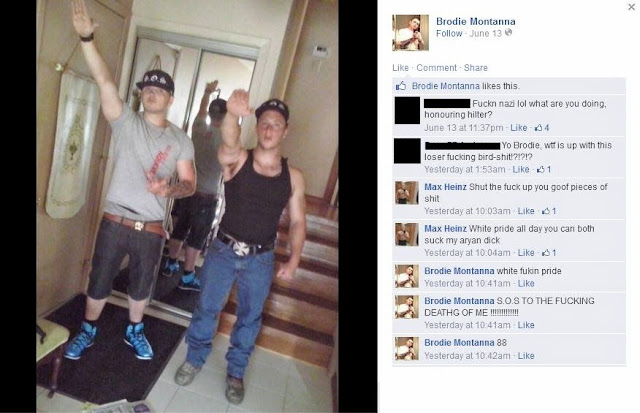 Or, you know, insult and threaten them? We mean, either way, right?


To be clear, yes Hynes is also attacking a newborn with medical issues. Because he's classy and shit.

Speaking of classy, Dan Hall got into a tiff with "Nazi Mom" a few months back regarding the suicide of another "White Nationalist." We won't spoil it for you. Just enjoy the show: 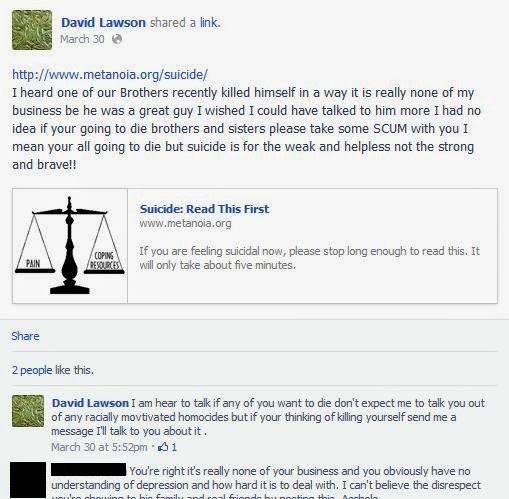 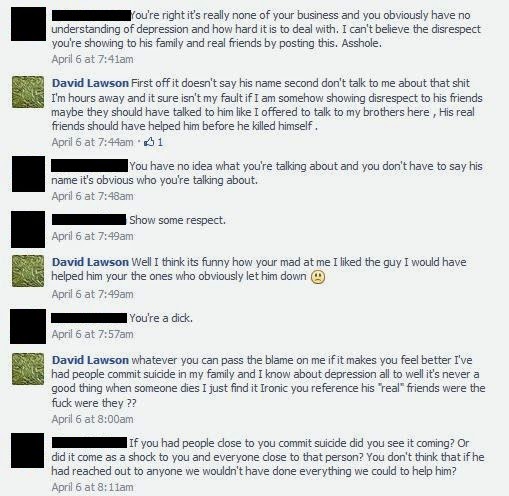 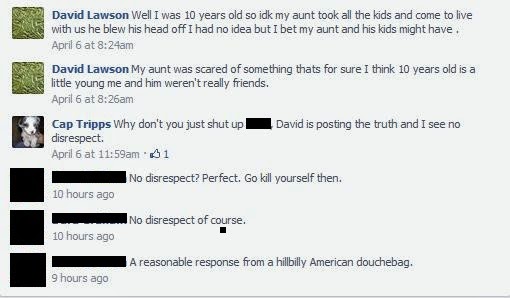 What is most fascinating is that Hall seems genuinely at a loss as to why someone who knew the person who died might be a wee bit offended by what he wrote.  But then again we aren't dealing with someone who is much of a people person. Also, his anger issues haven't appeared to have improved much since the last time we wrote about him:

Now Hall has deleted his Facebook profile again but before doing so he did post two interesting items (though "interesting" might not be the best way to put it). First, he was able to conflate the McCorkill civil case with the murder of three RCMP officers in the way that only he could:


Given his unhealthy love of firearms and his desire to, "shoot it out" with his detractors, we suggest the police might consider keeping a closer eye on Hall, especially considering his last stream of consciousness which he refers to as, "A Canadian Declaration of Independence" which really is crazy, even for Hall:

Yes, you SHOULD serve the crown attorney's office with that, Dan. And then let us know how it turns out for you. Still, we should note that your claim that you are, "not a person is full of hate" is undercut by much of what you actually wrote. Oh, and your numerous posts about fantasizing about killing minorities. And, well, this:


One gets the feeling that the Southern Ontario Skinheads' shelf-life might actually be shorter than even we had originally suspects.
Posted by Nosferatu200 at 22:48

He'll be 2nd in command by next weekend, no doubt! I mean, he's covered in white power tats. Covered!

And you guys thought we were bad at here in Calgary back in the hayday of things? Lol, These guys are a joke of epic proportions. Say what you want about the Aryan Guard, we were never like this.

What's sad is that you're sort of right.

These fucking guys out East can't do anything right.

I despise arc, the left and everything that goes with it. But id buy any commie fuck a beer before I sat across from these complete retards. What a joke.

Can't say who is and who isn't worse because Aryan Guard did ton's of stupid shit.

It's just the sad generation of pathetic people.

What the hell is happening in Canada, oh my god, I am a non-political bootboy from Luxembourg (Europe)I know that the white supremacists are not the intelligents species on earth, but all these guys from Crawford to Heinz (Ketchupsoldier or what ?!)are really retarded and they have big problems in their heads, it was funny to read all these comments from these idiots, but I didn't knew that such dumb people exist on earth wow, and they will be the new masterrace ?! I hope not...

While we don't like to use the "r" word, we do agree these fellas ain't too bright.