It's been a while since we wrote about Dean Clifford on the blog. In our last update in march, Clifford (who, we must stress, was in jail at the time) was convinced he had the system right where he wanted it and it was only a matter of time before he was able to bring down the entire edifice.

So, what's the latest?

Well, as of May 28, he was planning on filing commercial liens on numerous provincial properties, including RCMP stations, courthouses, and the Manitoba Legislature. He has written the Bank of Canada to inform them that they no longer represent him and that he is his own bank. He will be filing liens against every judge who have crossed him and will have their assets frozen. He will be naming, HER MAJESTY THE QUEEN as a debtor in all of his claims and plans on convening a 24 man Grand Jury (the highest level of law on the planet according to Dean), appoint their own judge, and then hold a common law court where they will convict HMTQ of.... well.... something. This, of course, is contingent on whether or not he gets his stuff back as well as additional compensation. Oh, but regardless he will be filing both criminal and civil charges against HMTQ so Grand Jury or not, things are going down! Then there's the petty stuff, like filing a lien on the house of a "sheriff" who crossed him by telling one of Clifford's lady friends to stand when the judge entered the room (in addition to promising to assault said individual upon Clifford's inevitable release).

In all, things are really looking good for Dean Clifford who has used his time in jail awaiting trial to plot the destruction of his enemies and set himself up for life. And he's confident that he will be released in a week or two.

Or we should write thought he would be released, as that time has sort of passed.

Still, doesn't matter! It's all a part of the master plan! Things couldn't be going better for Dean Clifford! We mean, take a look at the positive and upbeat updates on his own website:


Oh. That doesn't seem so good.

You know, it's hard to brag about how you have the legal system and the government over a barrel even from jail when the web administrator of your own website who has dutifully sung your praises for years now admits that you are a lying sack of shit and that he or she now no longer wants to have anything to do with you, your brother, and any of the die hard crazies you have surrounded yourself with. 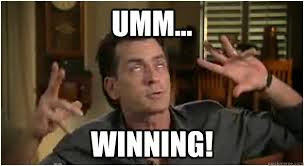