Sometimes, it really is fun to watch the boneheads self-destruct all on their own. Either through infighting or through ultimately counterproductive behavior, the final result is inevitable.

Take the blowback from the failed "White Man's March" that took place last month. The event was really an unmitigated disaster no matter how those in the movement try to spin it. The only people who actually seems genuinely pleased with the outcome of the march in Canada were John Beattie, Paulie Fromm, and the mouth-breathers in the Southern Ontario Skinheads. But even this resulted in a fair amount of online bickering as Beattie, who if we are to be fair is not exactly much of a player in the Canadian scene. That didn't stop both Paulie and the SOS responded then and some other SOS members responded again later:


The crux of Beattie's concern is that he argues, in all honestly correctly, that overt links to Nazism hurts the cause of, "White Nationalists." So Beattie believes while the Neo-Nazi boneheads will one day serve the purpose of protecting the big thinkers like himself (because he actually views himself as a big thinker), they should leave the public relation stunts to folks like Kyle Hunt who organized the White Man's March.

Because certainly Kyle Hunt wouldn't have anything to do with something as distasteful as the Neo-Nazi movement, right?

Well, Beattie might have to get used to being disappointed:


So really, these guys participating in an event in which boneheads are indeed welcome shouldn't be all that much of a shock:

So, let's shift our focus back to the Southern Ontario Skinheads, shall we?

The life span of groups like the SOS are between 6 months and 3 years, though a few manage to make it to 5 years. They ultimately fail in large part as a result of the inadequacies of the membership itself. Thus far there is nothing in the SOS that lead us to conclude they will be no different. In fact, given what we've seen we think they are already setting up their own imminent collapse.

Much of the membership itself has some problems with self-control. As members of a gang SOS members derive a sense of power as being part of a larger group. And when they feel empowered, they attempt to intimidate (and threaten) their opposition into silence: 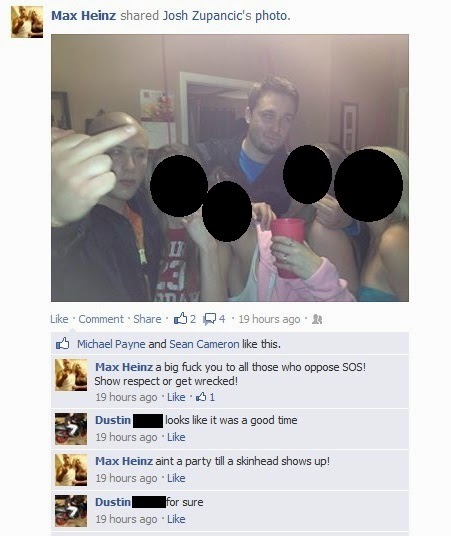 It also doesn't help that a number of the folks now in or associated with the SOS have rather extensive criminal records, including one of their more recent members:

Long term survival in groups such as the SOS require self-control and regulation. Does anyone believe the SOS are capable of these feats?

But you don't have to take our word for it. How about from the horses' mouth? In addition to the few photos they posted online, the SOS decided it would be a good idea to video their march through the streets of Kingston. Because, you know, how could that go poorly?

The following videos are really the ones that are indicative of the mind set of the SOS membership. As you're watching these videos, we want you to consider how the average Kingston resident would react to a gang such as this walking down the street:


Our favorite part of the videos is the casual vandalism they engage in as it sounds like at least one in the group decides to knock over two objects as they walk along a sidewalk. And people just love it when a group of people roam the streets screaming "White Power!" and "Who's streets? OUR streets!" interspersed with more than a sprinkling of profanity.

Ladies and gentlemen, this is not the way to make friends or influence people.

It's also not a good way to keep a low profile as this sort of negative behavior attracts the attention of the local constabulary:


Now, the SOS gang members might want to act tough....


.... but the fact is that attracting this kind of negative attention will result in the SOS having a relatively short shelf life.

So, shall we begin taking bets on when and how the SOS ultimately collapses?

What a bag of shit heads. I was more distracted by the sound of their winded breath while walking. Out of shape much boy-os?

And it's adorable seeing Max trying to "stand tall". He's such a funny lil' guy!

Max is a papered rat. Whats with the divided we stand united we fall?

lol anonymous aka jessie "cockold" lajew, you can spread all the lies and gossip you want. Reality is it wont bring back what is a completely dead scene in calgary. Your little microfuhrer kyle is on his way fast to being a scrawny, broke version of bill riccio (that is if you consider a couch your bumming off of a aryan compound).

Where can I read the article featured in the photo regarding Jared Gilkes?