The Failure of "Cobbsville" Part VI: The Canadian Reaction

We hadn't planned on writing another entry in our Cobbsville series, however the following brief message was left in the comments section of Part V:

We can't disappoint our fans now can we?

Since our last post on the subject Craig Cobb (who having shaved and gotten a haircut is looking far less like Krusty the Kobb now) begun....

.... and concluded a hunger strike. Had his bail set at over a million dollars which he could not pay and then set at a much lower amount which he still could not pay (we wonder why his "millionaire" friend, the convicted sex offender who founded and runs the White Nations forum, can't seem to help Cobb out)....

....pathetically begged for the charges against him be dropped on the promise he would leave North Dakota forever, sold a number of the properties he purchased in Leith, and had his most trusted ally turn against him in return for agreeing to testify against Cobb.

In short, Cobb appears to be hooped.

Now are readers know that as a result of living in Canada for 5 years a number of decades ago, Craig Cobb was able to apply for and receive Canadian citizenship. But except for those 5 years and the couple of years he lived in Vancouver after being deported from Latvia, his fidelity to this nation might be somewhat in question.

So, how have our home-grown boneheads reacted to the Craig Cobb saga in North Dakota:


Ugh! Really. A compliment from John Beattie really is the kiss of death for any movement. John Beattie, formerly leader of the Canadian Nazi Party back in the 60s and who now tries to claim he is relevant as the "leader" of the British Peoples' League, seems to have the uncanny ability to curse any effort he tries to endorse or give advice to. In his effort to make himself a player in the movement again the old relic is running for elective office in Miden, Ontario in the next municipal election and is even going to be interviewed by Don Black.

We look forward to witnessing both train wrecks.

How about Cobb's fellow Creativity Movement adherent Wes Smith of Toronto? He had commented earlier when Cobb began his hunger strike and was confident that Cobb would be fine: 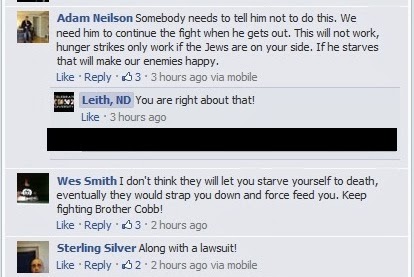 Upon learning of Kynan Dutton's agreement to testify against Cobb, Wes was a little less ebullient. Still, if Wes Smith could be compared to Spike, his Chester soon began yipping about the injustice of it all: 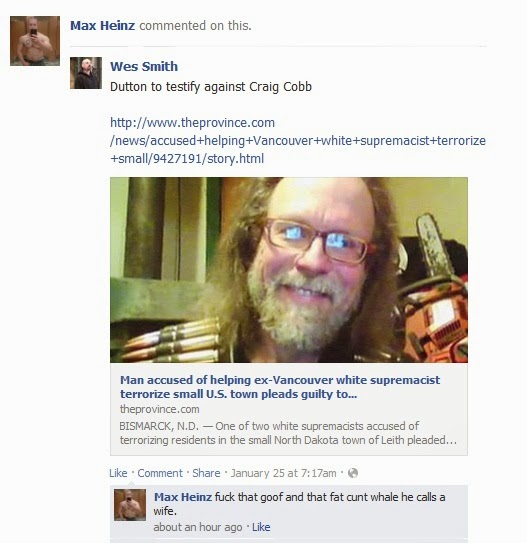 Not everyone seems to have thrown Kynan or his Deborah under the bus. We noticed that he was still friends with one of the more colorful members of the movement in Canada: 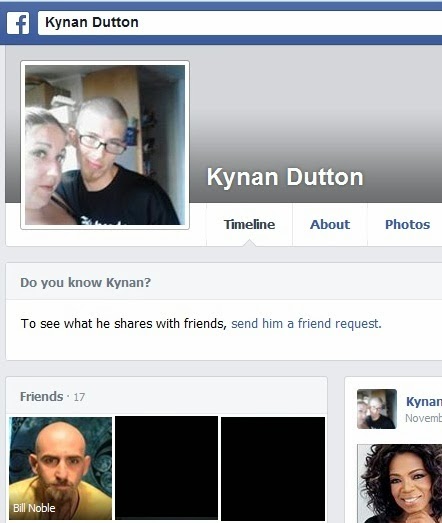 Birds of a feather, eh Bill?

And because it's Bill, he readily and eagerly latched on to every single conspiracy theory that the boneheads supporting Cobb, Dutton, and Henderson came up with concerning the "lawlessness" of the normal folks of Leith: 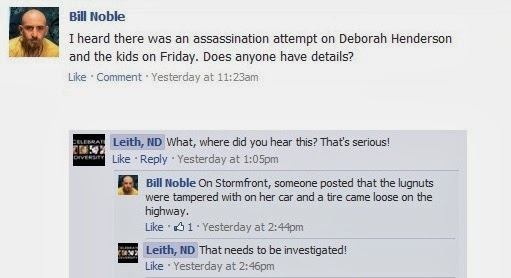 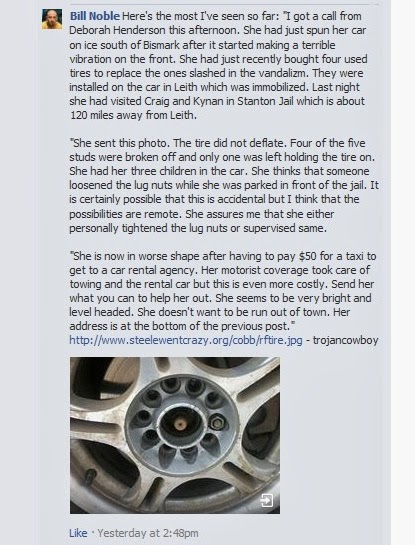 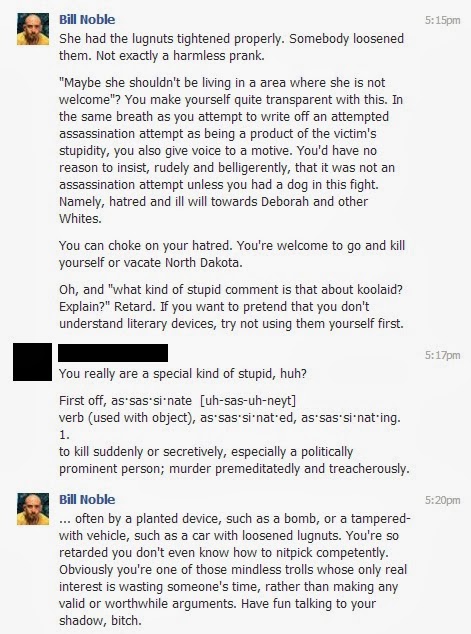 Oh, Bill, you are still a sweet talker.

We know that this won't come as a particularly big surprise to our readership, but the claims that the people of Leith were trying to off Cobb and co. have been discredited. But hey, don't let that small detail get in the way of the paranoia. It's really quite amusing.

But really, the person in Canada who in a spiritual sense is most aligned with Craig Cobb is London's own Tomasz Winnicki. Winnicki is a proponent of.... let's say ethnic and political separation. He would very much like a country defined by ethnicity but, barring that, would settle for a nation composed entirely of conservative geniuses such as himself.

Charting the evolution of Winnicki on the Cobb saga has been interesting. Though he starts out very smug, he actually appears to go through many of the 7 stages of grief, though not necessarily in the correct order:

We're not sure who this "we" he's talking about is. As far as we're aware, he STILL hasn't so much as rented his own apartment.

It's pretty hard to start a new society when your mom still does your laundry, Tom.

This is the reality of the racist movement in Canada. Yes, a lot of them pose a real danger to individuals, but on an organizational level, the movement continues to be a joke.

When you hit Part 14, can we break for a lite luncheon?

You should really seperate these fuckin lunatics from the rest of canadian nationalists who aren't complete fuckwits.