We mentioned the White Boy Posse four years ago after the gang was busted as a result of a 15 month investigation into their involvement in the drug trade. And as serious as that might have been, it pales in comparison to this:


The man facing first-degree murder charges in the decapitation of a Lloydminster, Alta., man in October is also charged in two other homicides.


Randy James Wayne O'Hagan, 22, of Lloydminster is charged in the death of Robert John Roth Sr., 54, whose partial remains were found near Ranfurly, Alta., on Oct. 20.

Roth's severed head was found five days later by a passerby in Edmonton.

O'Hagan and Nowytzkyj are also charged with offering an indignity to a human body.

Roth’s family were shocked by the killing, saying Roth was a quiet man who worked as a manual labourer in the Lloydminster area after previously driving a truck, but police say he had connections to his killers.

O'Hagan, along with Kyle Darren Halbauer, 22, is also charged in the death of Bryan Gower, 35, whose body was found on a rural road near Kitscoty, Alta., on Sept. 25.

Both face charges in the attempted murder of a second man in the same incident.

Killers went to the wrong address

The pair are also charged with first-degree murder in the death of Lorry Santos, 35, who was shot and killed after she answered the door of her Saskatoon home to strangers on Sept. 12.

Police said the killers had gone to the wrong address and Santos was an innocent victim.

An Edmonton man, Joshua Petrin, 29, was also charged with first-degree murder in the shooting.

Police said all four men are members of the White Boy Posse, a drug gang based in northern Alberta with tentacles extending into Saskatoon and the Northwest Territories.

"What is surprising to me and to my teammates is the level of violence they've escalated to certainly in the recent years," said Supt. Ted Miles of the Alberta Law Enforcement Response Team.

"Whether (the arrests) will impact their operations ... we're continuing to investigate," he said.

All four suspects are in custody.

Killings meant to be visible: expert

Author Michael Chettleburgh, who has written two books on Canadian street gangs, says if the killings were done by gang members, it may have been people looking to advance in the organization.

Chettleburgh said the White Boy Posse is based somewhere in Alberta and that they are suspected of being a "puppet gang" of the Hell's Angels, dealing drugs for the larger gang.

He said the public nature of the killings may be an attempt to establish a name for the gang.


"The fact that these crimes are very visible to me simply says to me they were designed to be visible.

Designed to tell others we're here, we're alive and don't mess with us," he said.

But don't worry. People like these aren't real threats to anyone. No, the greatest danger Canadians face are from..... anti-racist activists! 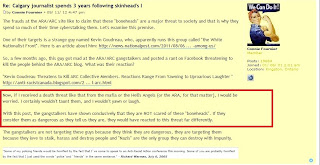 We might however mention at this time the White Boy Posse is affiliated with the Hell's Angels so, there you go.
Posted by Nosferatu200 at 22:53

A sorry story and more proof in case we need it of the failure of drugs prohibition. The way forward is to de criminalise this business and regulate and tax it. This move will put these sob's out of business overnight. Like alcohol prohibition years ago, these arcane laws failed in protecting people from themselves.

I wonder if this gang-styled money making endeavor was at all financially supporting the non-moneymaking side of things, i e the Boneheads. Probably not, but then again...

Sad...Sad...Sad These cowards should not be sensationalized by authors or anyone that use inaccurate words like organised crime,making a statement,collecting dues,ratting out,gang members,the public nature of the killings may be an attempt to establish a name for the gang..etc It's not organised crime, it's down right filthy sneaky evil lazy greedy crime. They're "making a statement"is done by paper ,pen or computer not by chopping off someones head, call it what it is, a criminal act in taking away a human beings life because another human being thinks they were placed on earth to determine when people will die.'collecting dues',a light,head in the sand way of saying people torturing, killing and hurting others for drugs,evil,etc. These people in bunches with weapons who live outside of the law are so called gang members.call them what they are cowards without a bunch of backup cowards and weapons.TELLING THE TRUTH is the definition of ratting.So as long as everyone follows and obeys these cowarding bullies, we will never tell the truth, nothing will change and maybe one day you will encounter more than one of these beings indirectly(like Mrs. Santos)or directly(like a friend,family member and or even oneself) It's our duty as Canadians to take back our lives.