When we wrote that we had a discussion with a person from "Maclean's" about Sec. 13 and the implications of it's demise, our favourite stalkers seemed to take notice as well: 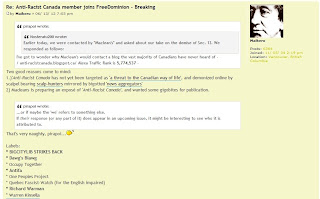 Unfortunately, they appear to have been left disappointed: 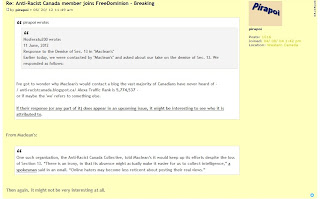 We didn't expect that everything we wrote would be included, though we suppose we shouldn't be surprised that it wasn't our take on Sec. 13 that was published, but on the follow-up question we received later in the day. From the article that was published:


The rest, presumably, will fall to civil society, which is arguably where the onus belonged to start with. For decades, interfaith groups and non-religious organizations have been promoting tolerance. In recent years they’ve been complemented by hard-core activists who patrol the Internet, ferreting out hate sites and gathering information for the benefit of police. One such organization, the Anti-Racist Canada Collective, told Maclean’s it would keep up its efforts despite the loss of Section 13. “There is an irony, in that its absence might actually make it easier for us to collect intelligence,” a spokesman said in an email. “Online haters may become less reticent about posting their real views.”

The full exchange that resulted in the mention in "Maclean's" is as follows:


Mr. Gillis: IN the absence of Section 13, will you guys be stepping up your efforts to expose hatemongers online? Does it give your work added importance?

ARC: Nothing changes for us. We'll continue monitoring and reporting. There is an irony in that the absence of Sec. 13 might actually make it easier for us to collect intelligence as online haters may become less reticent about posting their real views online.

Mr. Gillis: Intriguing. When you say report does that mean you sometimes forward information to the police?

ARC: When appropriate, yes, though the reporting I was referring to was that which we do on the blog. But when we do come across something that we think the police need to see, we forward that information to them. What they do with the information we send to the police is up to them at that point.

In all, we can't fault Mr. Gillis in what he wrote about us, though we would have preferred that he had included the fact we believe the decision to get rid of Sec. 13 was ill advised.
Posted by Nosferatu200 at 23:45

It strikes me as pretty dishonest to totally leave your position out of it.