The fact of the matter is, Scott has stolen over a thousand dollars in cash, and nearly the same in property from two single moms who did nothing but take care of him for the last two months. He's lied, cheated, and went so far as to steal a childs toothfairy money. He beat himself up to play off an RCMP hostage situation, because he spent MY MONEY on drugs... and this isn't the first time, and it certainly wont be the last. If anybody wants the true story of what is has and always will be scott alexander wilford king... contact ***, the nutcase psycho bitch ex... who has a stack of proof 10x that of his pile of lies.

I am no longer posting on here, this is not a debate, this is not highschool, and I have done all I set out to do. And to that darling lover of mine, as I'm sure you've got eyes and ears up here as I type, since it wasn't made formal and you haven't the balls to face me... we are through. You don't deserve the people you have in your life, you hold no right to call yourself a man. You put your drugs ahead of your own flesh and blood, your greed over unrivaled love and devotion... your cock ahead of inhuman purity and the deepest sacred bonds. Keep convincing those whom you can, but all those of importance in the real world know the truth. The sad thing is, at the end of the day I would have loved you just as you are behind all the lies... but you stole from our children, and abandoned your own and still are trying to play the victim... and even if nobody else believed it, you know what you've lost and what you left it for... I hope it keeps you warm at night.

Should Mr. King wish to give his side of the story, we would be happy to post his rebuttal. 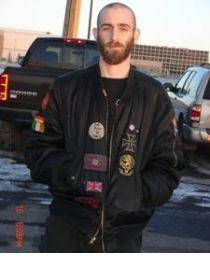 On an unrelated note, Bill Noble has been out of jail for a little over a month and a half now. We're currently taking bets on how long he'll remain free. Right now the latest anyone has Noble staying out of jail is one year, whereas the earliest is 2 weeks from yesterday. When we average out our bets, we're thinking Noble has another 3 months of freedom.

Does anyone want a piece of this little wager?

We have noticed that the Aryan Guard have been fairly quiet lately, at least when it comes to their online activities. We should, however, provide a warning to the good people of Lethbridge, Alberta who currently have to deal with Thomas Trenerry. It looks like John Marleau is also moving to the city soon, if he hasn't already. Marleau has been a fixture at most Aryan Guard rallies and protests. He's been the spokesperson for the gang on a number of occasions ususually 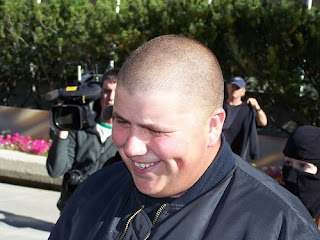 when Kyle McKee has been picked up for the police on outstanding warrants. This is the guy who thought it appropriate to make fun of a firebombing that occurred at the residence of an anti-racist activist's home. We're sure that Marleau will continue to be active within the Aryan Guard until the gang is finally taken down by the authorities.

Actually this does lead us into another discussion, this being a success story. The Edmonton City Police, after an investigation of several months, took down a racist gang known as the White Boy Posse. It might have been that the gang was merely using the iconography of racist skinheads in an effort to intimidate others, but the point remains that they are for all intents and purposes finished in Edmonton.

A major undercover police investigation has taken 14 members of the White Boy Posse gang off the streets.

The 15-month operation, dubbed Project Goliath, involved 40 members from the Edmonton Police Service and RCMP targetting the Edmonton-based criminal network. They seized weapons and drugs.
Police said the the gang is associated with the Hells Angels.

A spokesman for the EPS said more details will be released at a press conference tomorrow morning.
But a source close to the gang scene said the bust will do little to reduce the blow of drugs in .

“Next week it could be another gang or another group, and the next month another big bust of another group. It’s never-ending,” said the source, who spoke on condition of anonymity.

Groups like the White Boy Posse are not gangs in the more traditional sense of wearing colours, said the source, but are drug dealers that have become more business-like.

“A lot of them have moved away from the early-2000s and late-1990s stuff and have moved underground and started making money, becoming more organized.”

Often, drug dealers get tired of being low-level thugs and want to make their own money, said the source, so they break off and become their own bosses.

Those networks focus almost entirely on drug dealing and are active in running drugs to smaller communities, said the source.

Project Goliath included RCMP officers from Leduc, , , and Whitecourt in the investigation, suggesting the White Boy Posse had involvement in the drug trade in those communities.

“It’s sort of like they sell drugs up and down Highway 43.”
As far as he is aware, Thain says there are no gangs based in Whitecourt but gangs do make drug runs in and out of the community.

Gangs may also have a larger presence in than in other cities, said gang expert Michael Chettleburgh, who was speaking at a youth-crime prevention conference in today.

“On a per capita basis the Western provinces have a higher percentage of street-gang members than other cities in ,” he said, “largely due to the disenfranchised, young aboriginal community.”

He also said about 50% of gang members are involved in organized-crime activity - they’re hired by organized crime syndicates to carry out activities like drug sales or intimidation.

Police said there are 24 “criminal networks,” including the White Boy Posse, operating in the area.
Posted by Nosferatu200 at 00:42

I am Replying in regards to the post on Scott Alexander Wilford King, this man is my bestfriend, and there is no doubt in my mind that he has wronged aot ofpeople, but please, he hasnt been seen, or heard from in over 2 months and i am worried about him....if you have any news please someone let me know......

Scott alexander wilford king or whtever the hell the peice of shits name is. This man is nothing but a liar a thief a abuser a rapest over all not a good man he prays on teeagers. The shit that manput me threw is horriable and whthe puts others threw this man terrifies me. Any women outtherewho thinks this man is a good man is STUPID and needs to have their head examined for real. Because of scott wilford king iam terrfied of my own shadow im scared of my own male family member s. He stole so much from my family. He has stolen so much from me being my life my trust. He got me hooked on drugs he forced me to do dirty things for his dirty habit. If he ever reads this he will kmow who it is and it scares me but women needs to know what kind of peice of shit they are dealig with. He will use your family against you he said he woul kill me sisters if I didt listen to him he would burn down my family's house this is why I sayedwith him.i was only 17 now iam 25 been away from him for 3 year's but still the pig wont take a hint I want nothing to do with this man. I just want him to be stopped. Just like he said to me YOU DONT DISERVE THE AIR YOU BREATHE YOU DISERVE TO BE BURRIED IN A SHLLOW FUCKING GRAVE. He stole guns from my family he stole money from anyone or everyone who helps him. This man needs to stop he needs to be stopped. He is already on tohis next victim. I feel bad for anyone who believe his lies because this man talks out of his ass!

This Scott person is an absolute piece of garbage. I hope he reads this and knows that he is disgusting and will be in jail soon. we kept this man in our home for a week and he stole money from us. worthless piece of shit. deserves every bad thing that happens to him.

December 2018. Scott Wraith King is in Montreal & he’s still praying on single moms! He recently stayed with a close friend of mine for weeks. He claims to have throat cancer... After weeks of supporting him in every way he left when she wasn’t home like a coward! No goodbye or thank you, but he did manage to steal her money on the way out! Ladies beware!!!