In Edmonton this past weekend, Ezra Levant and his merry little basket of deplorables posing as journalists held a rally at the legislature opposing the carbon tax passed by the NDP government that is set to come into effect in January 2017. Aside from the fact that Levant claims The Rebel is a journalistic endeavor and that political advocacy more than blurs any pretense of journalistic objectivity, protesting is perfectly fine in a democratic society. Prominent politicians such as Wildrose leader Brian Jean and federal Conservative leadership candidate Chris Alexander were in attendance


But things really did go off the rails very quickly:


Not surprisingly, this all resulted in significant media coverage as other conservative (big "C" and small "c") politicians denounced the rhetoric at the rally and comparisons to Donald Trump-style politics were made:
Well, we guess not everyone was ready to denounce the "lock her up!" chant: 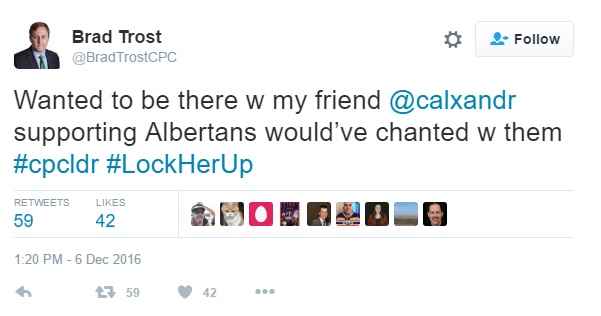 Then again Brad Trost is sort of an idiot. And considering that your "friend" Alexander is scrambling as quickly as he can away from the incident, we're not sure he would be as appreciative of your public support for him in relation to the chant.

In brief, it was all a bit of a dumpster fire. And Ezra being Ezra, there's no fire he isn't willing to throw more gasoline on as he later double downed on the "lock her up!" chant: 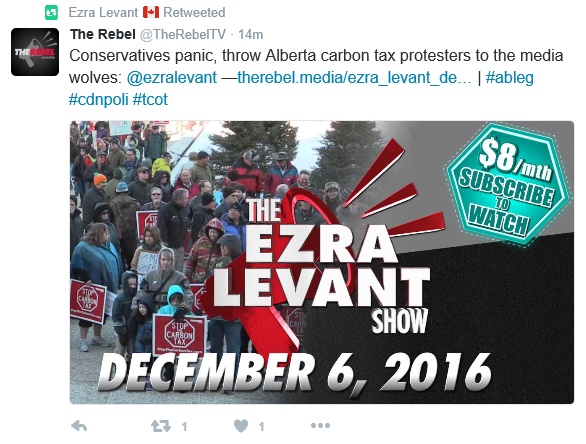 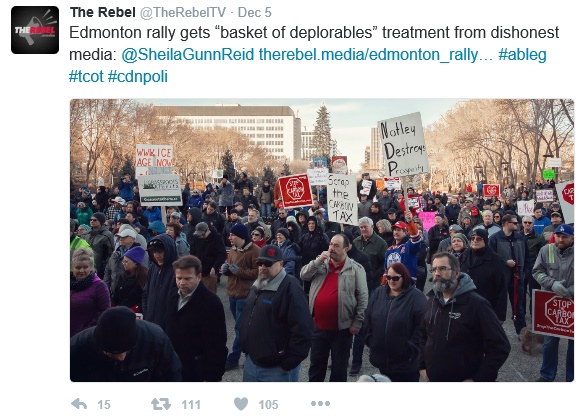 Let's take a closer look some of the incidents that occurred.
Regarding the chant, one person in the crowd seemed very happy to take credit for starting it. We would be remiss if we didn't assist his efforts: 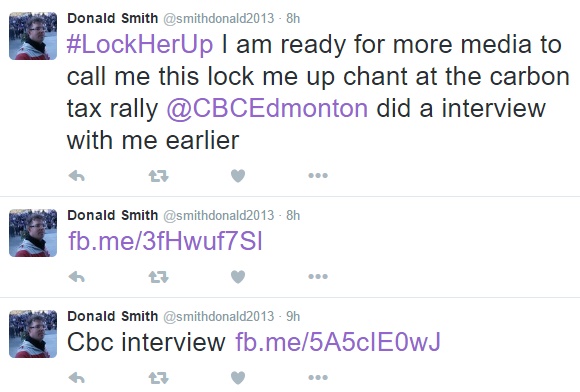 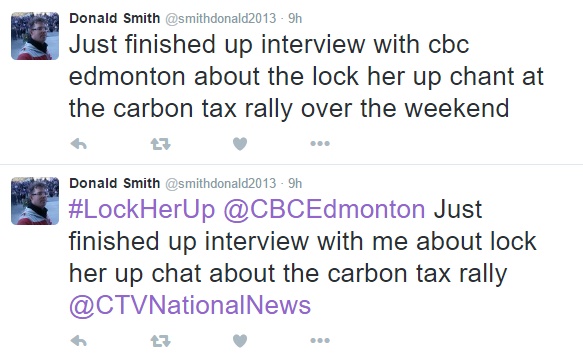 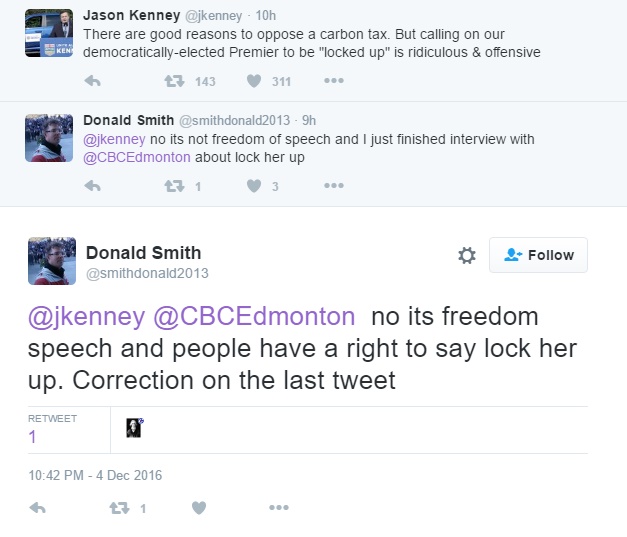 Mr. Smith made a lot of new friends at the anti-carbon tax, pro oil, rally.... 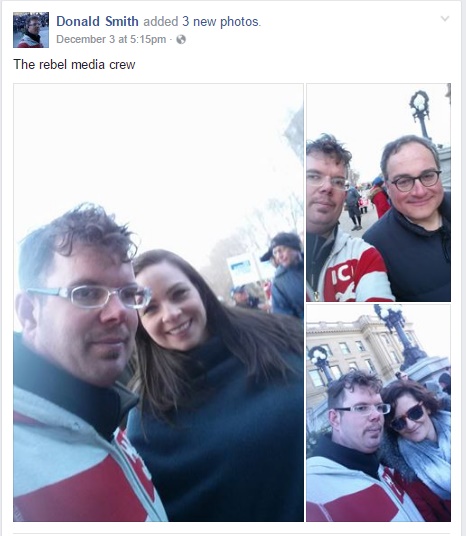 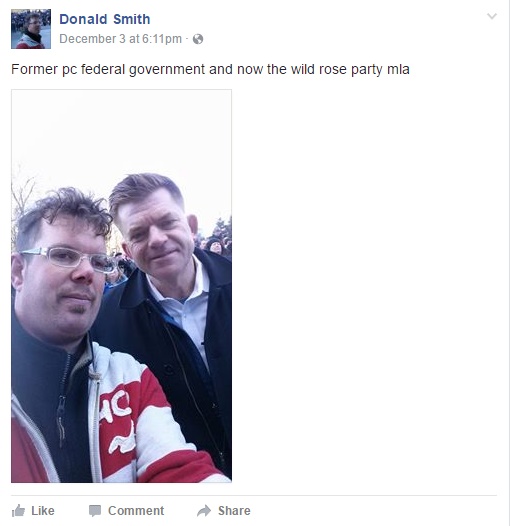 .... but he seems a little confused to us, in that he seems to support anti-oil protesters elsewhere...

.... though he does engage in the requisite paranoid ravings:

But hey, consistency isn't really a thing with many of these folks.

Another part of the event that received wide coverage was the presence of protesters who had with them particularly homophobic signs with them: 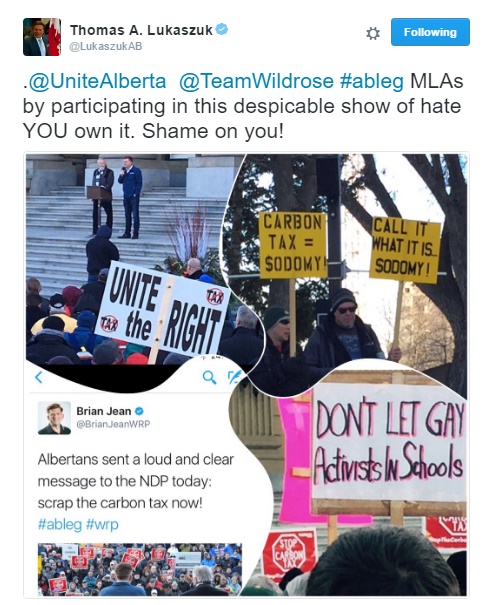 Ezra, claiming to believe they were NDP plants, has offered cash money for information about their identity:

Ezra says he thinks they are plants however based on social media posts, other observers might suggest they represent the views of his core demographic:

Patti is commenting on a story published by The Rebel's Faith Goldy in which she uses a phrase coined by white nationalists in an attack on a CBC programme: 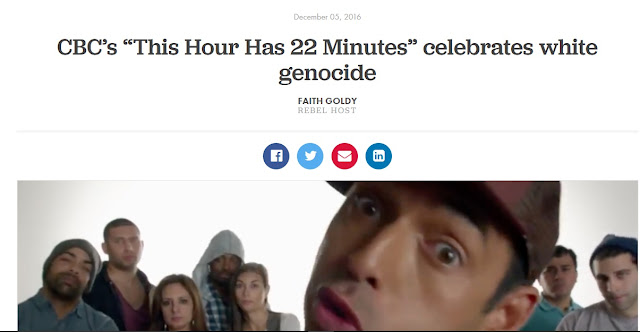 Since The Rebel has become one of the more popular sites referenced on the Canadian section of Stormfront, perhaps it shouldn't be too much of a surprise that they have decided to jump head first into the cesspool: 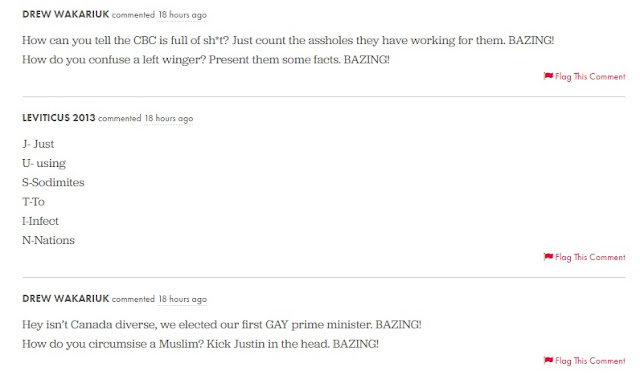 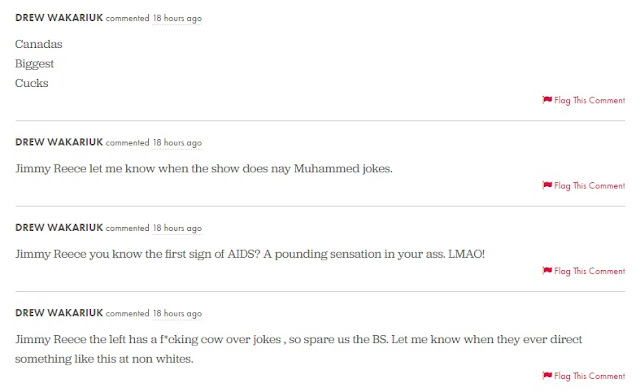 People carrying homophobic signs at a rally organized by The Rebel sure do seem TOTALLY out of place and suspicious....

Which then brings us to this nugget that was being distributed at Levant's rally: 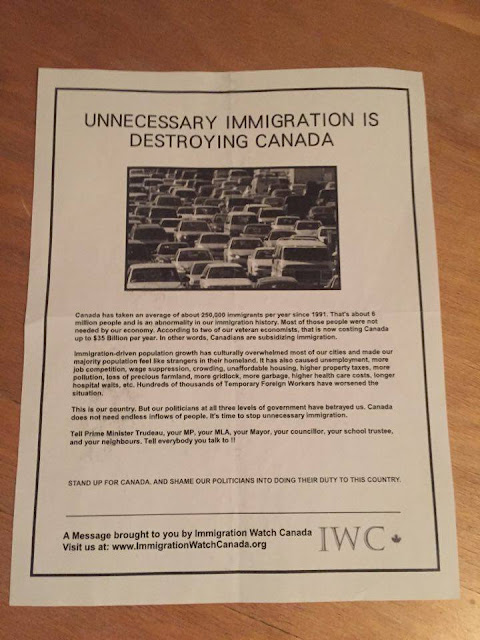 We've posted a few articles on Immigration Watch Canada in the past, including other nonsensical and dishonest flyers. In this case based on the photo they decided to use, IWC appears to be claiming that immigrants are responsible for traffic, though to be clear only the "ethnic" immigrants are to blame. It's a similar tactic Paulie took when he most recently ran for mayor of Mississauga: 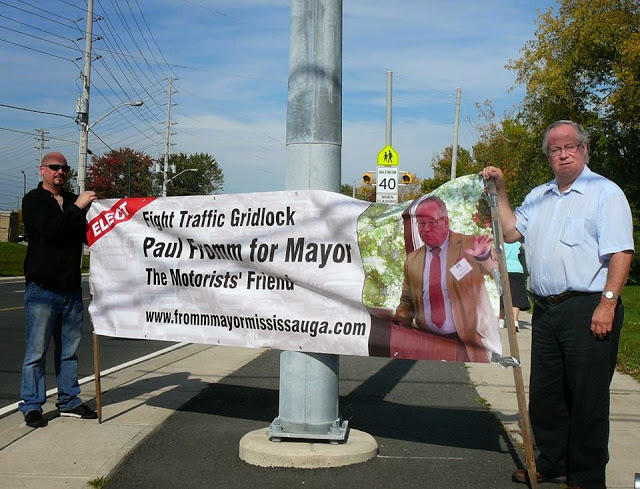 This was a busy weekend on the campaign trail with extensive literature distribution in many parts of Mississauga. Here we unveil my sharp election banner to inform motorists coming of the QEW gridlock into Port Credit that Paul Fromm is "the motorists' friend."

In fact Paulie and IWC have a bit of a history with Chris Alexander, who as we've mentioned is running for the leadership of the federal Conservatives and who was a prominent speaker at Levant's rally. In the previous government, Alexander in cabinet as the Minister of Citizenship and Immigration. Paulie and the folks with IWC weren't very happy about Alexander's work in in the department, resulting in a protest outside his constituency office in 2014:

It's hard to hear much of anything in the video, however IWC were also kind enough to post on Facebook and allow their supporters to express how they really feel: 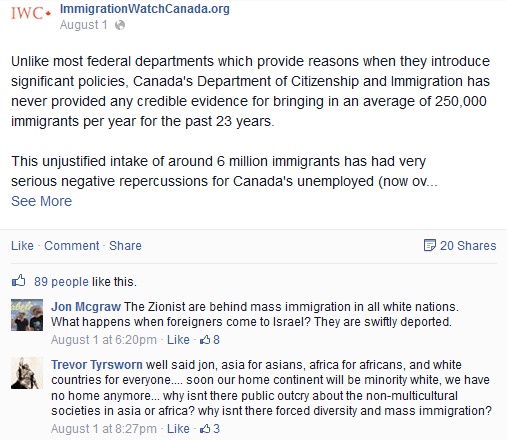 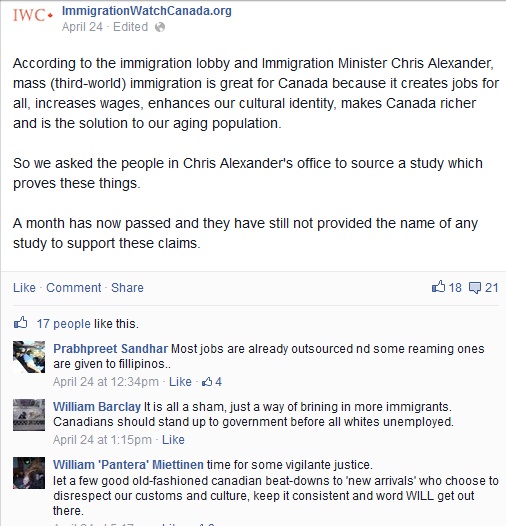 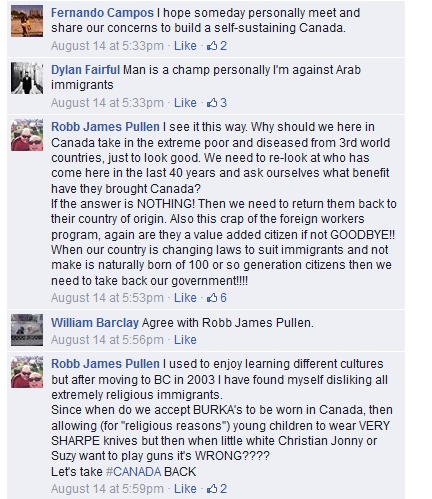 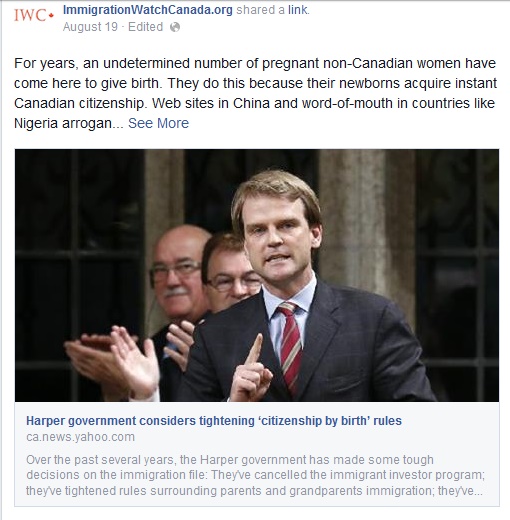 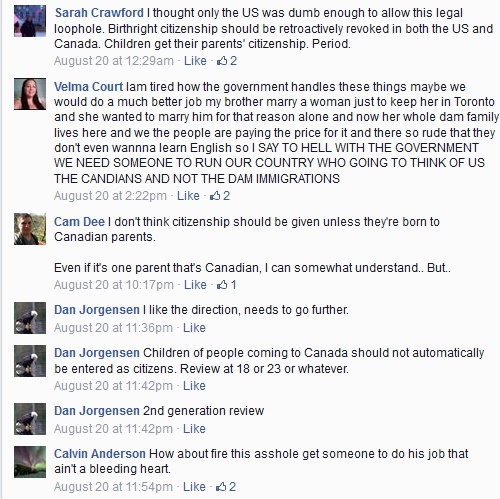 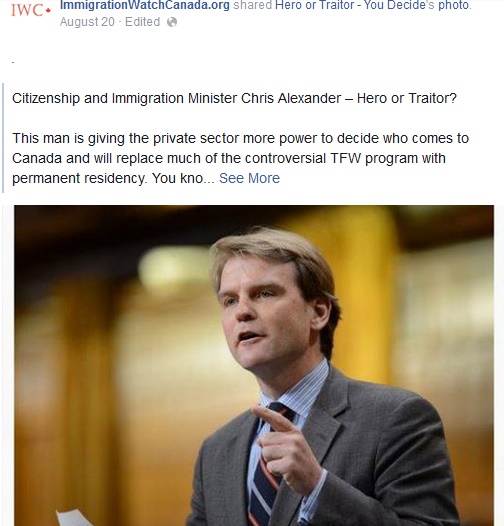 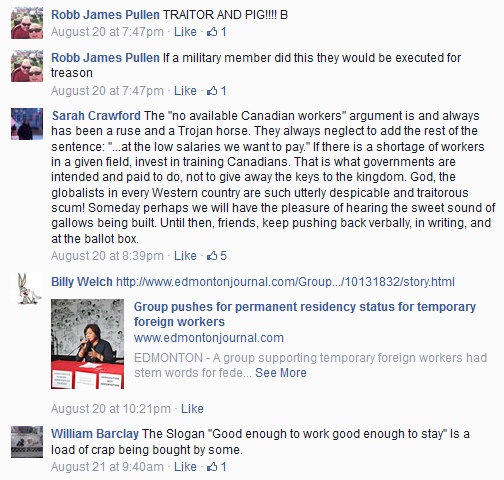 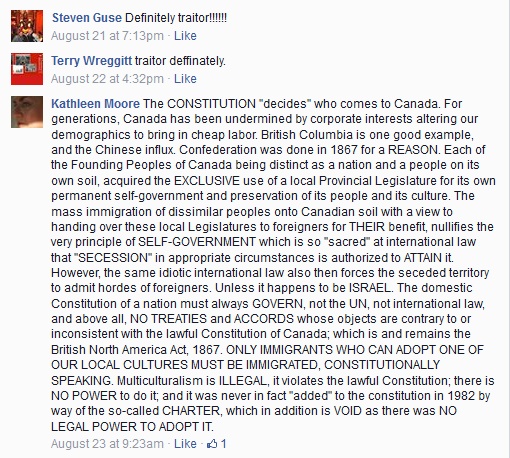 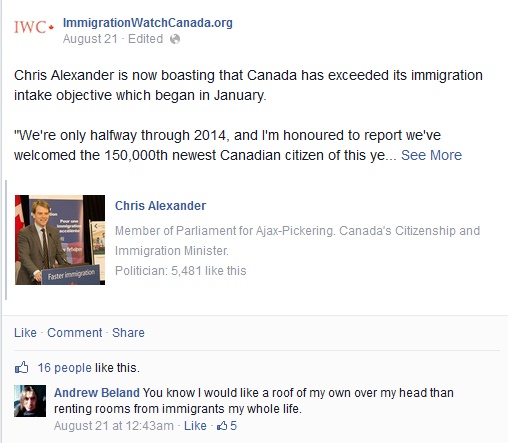 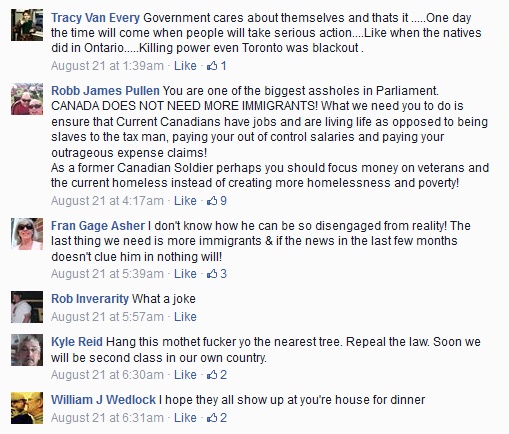 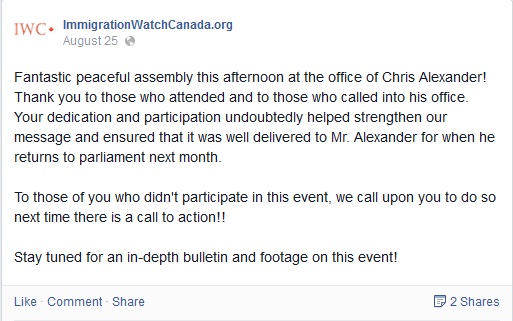 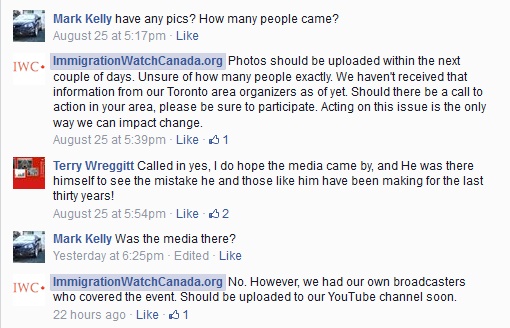 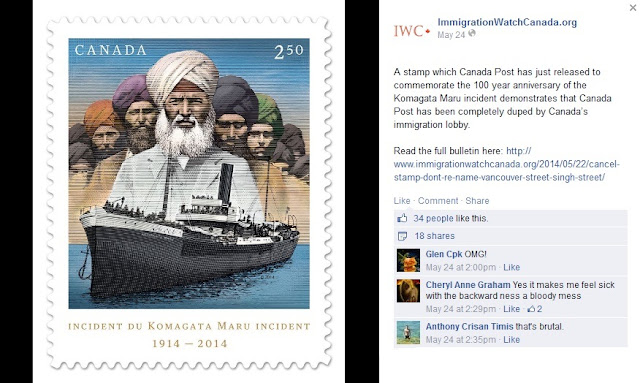 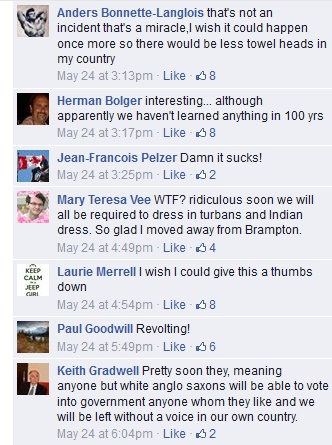 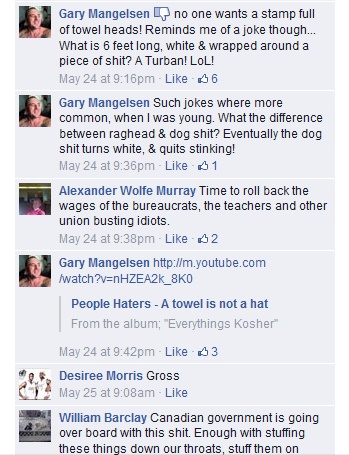 If you lay down with pigs, you're going to get muddy.